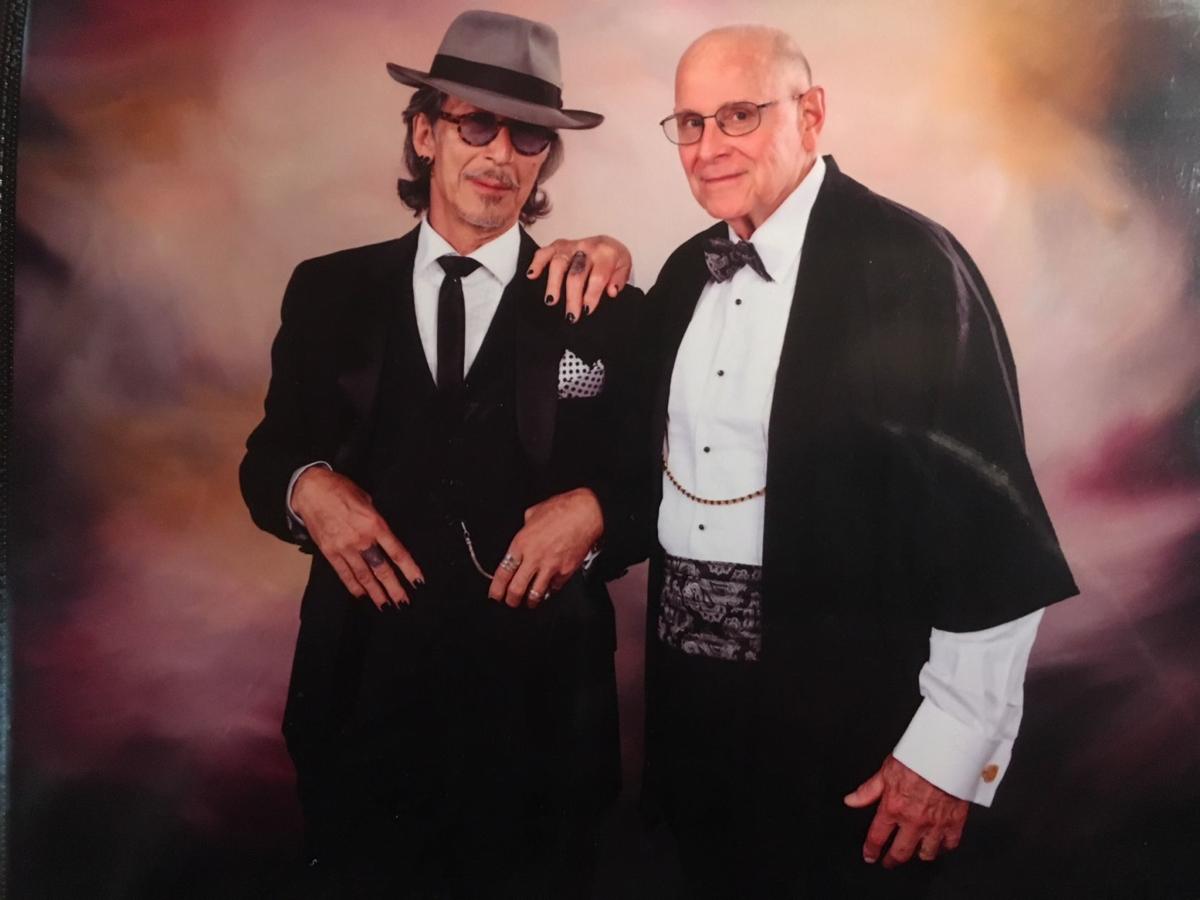 The two members of the exclusive Osaka Tiger Club, Onri Gosling from Australian and Judge Philip Champlin of Napa. 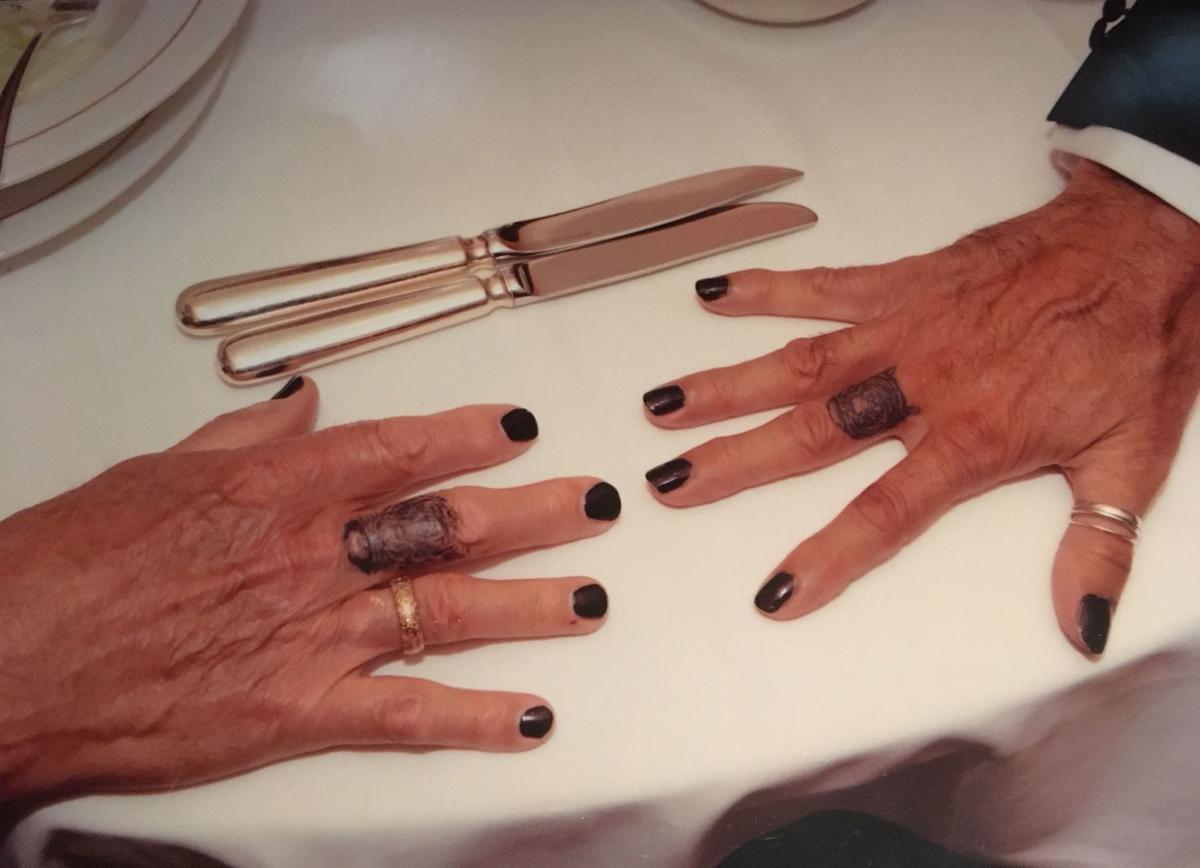 The two members of the exclusive Osaka Tiger Club, Onri Gosling from Australian and Judge Philip Champlin of Napa.

Three years ago, I wrote a column called “The Tattoo” (April 5, 2015) in which I told our family’s history with tattoos. In fact, the cartoon caricature for this column, “Coffee, Tea, and Me” is of me as a stewardess in 1965. It was done by a Kristina McDonald, young female tattoo artist in Napa.

On our recent trip, I learned that my husband wanted to add to his tattoos with a new one. He was fascinated with Maori tattoos, so when the ship docked in New Zealand, we visited an Auckland tattoo parlor to make inquiries. It didn’t happen, partly because we didn’t have time.

So, back to the ship and onward to Australia, New Guinea, and Japan. One morning at breakfast, my husband noticed an exotic-looking man sitting in the restaurant with his wife who had several visible tattoos. He had various other items of body art too, including pierced ears, large earrings, and black nail polish.

Philip wondered if he should go over and introduce himself and compliment this man on his body art. I said he should. So he went over and introduced himself. His name was Onri Gosling, and he told Philip that many of his tattoos had been done in Asia, particularly Japan, which had a worldwide reputation for the skill of its tattoo artists. In fact, he said, our first Japanese port of call, Osaka, was famous. We started making plans to go ashore.

We were soon bonding over meals and telling our life stories. Onri and Rosalind lived in Australia and own a tree house B&B. Rosalind was a former school principal and Onri was an international entrepreneur. Onri was exotic- looking as his father was Welsh and his mother was Vietnamese. He had long flowing salt and pepper hair and was very elegant in his clothing.

Rosalind was an Australian blonde beauty. With her sense of style and fun, she was a lovely addition to the ship’s fashion show. They had been all over the world and were sophisticated travelers.

While the other passengers did the more normal shore excursions, we four took off in a taxi to visit the Nishishinsaibashi District of Osaka. Onri, our expert leader, called this area “funky” but to me, it was a fun busy area for young Japanese. It was crowded with modern clothing shops, coffee and Saki bars, and restaurants. I even saw girls with tall ice cream cones made of different flavors and colors piled on top of each other. These cones were about a foot high. The young ladies were giggling, as they were licking the cones as fast as they could before they melted. I wanted to get one but our men were in too much of a hurry.

We walked for blocks searching for an available tattoo parlor. But they all had the same story. “So sorry, we are booked for months.” People from all over the world had called ahead for reservations. Finally, we found a tattoo shop that employed on-call artists who were available.

While waiting our turn, we met a young African American man, with his hair in dreadlocks and cornrows down his back, who was having work done. His upper body was covered with beautifully colored Japanese style tattoo art done from previous visits. He was very friendly and soon we began to talk. This was his favorite shop and the only tattoo shop he trusted to do a good job on his trips to Japan. He knew them all and told us we were lucky to have found this one. Our conversation turned to the usual, “What do you do in life?” and we learned he was an airline captain for one of our larger U. S. airlines and lived in New York. That was all we needed to hear. We were in a top shop and started to relax.

First, Philip and Onri consulted with their tattoo artists and told them what they wanted. Onri’s was a bit easier. All he wanted was that his tiger finger tattoo have the colors restored. For Philip, his artist had to start from scratch. It took time to get it perfect.

Philip and Onri stretched out on long padded tables with their hands extended. The artists each had a stool and table next to them. Both men’s hands were resting on the table, along with a lamp, magnifying glass and tattoo equipment. They looked like they were in an operating room having surgery.

The tattooing took a couple of hours, I was busy taking photos from all the angles while Philip napped. I gave him a ‘thumbs up’ to tell him it was looking very good. I knew he would be happy with it.

When it was over, Onri and Philip were very proud of themselves; first for finding a shop that could help them, and then going ahead and doing it. They spent the first few hours after their appointments admiring their new fingers. It was a scene to remember.

Our next problem was getting back to the ship. There weren’t any other tourists in this part of Osaka. We were finally lucky to find a vacant taxi. But the driver spoke no English. After several minutes of trying basic words and sign language, Rosalind pulled out her phone and showed the taxi driver a picture of the large Ferris wheel next to our ship. The driver’s eyes lit up, he broke into smiles, giggled and started speaking rapid Japanese. He finally understood where we wanted to go. We jumped in and off we went.

We arrived at the ship with our husbands’ new art, which would live forever on their fingers. Of course, they were the only two out of thousands of passengers with tigers on their fingers. They explained to curious fellow passengers that they had become members of the exclusive Osaka Tiger Club (with a membership of two).

The ship’s photographer even took a picture of their hands at a formal dinner night, which was later displayed on the wall with all the photographs taken that evening. It certainly stood out. Onri lent Philip his black fingernail polish that I applied. That night, he wore his new kimono jacket with his new look. Did I ever tell you that my husband is never boring?

We are now back in Napa. Philip likes to show off his new tattoo to lawyers and court employees. They all say they admire it, enjoy a giggle and then, guess what? They show Philip their tattoos in return.

The question is, do you want to join the Osaka Tiger Club? It is still accepting new members.

The term "exotic" is extremely troubling

This letter is in response to the article "Coffee, Tea and Me: The Osaka Tiger Club" by Lynne Champlin published on Aug. 5. In the article, Mr…