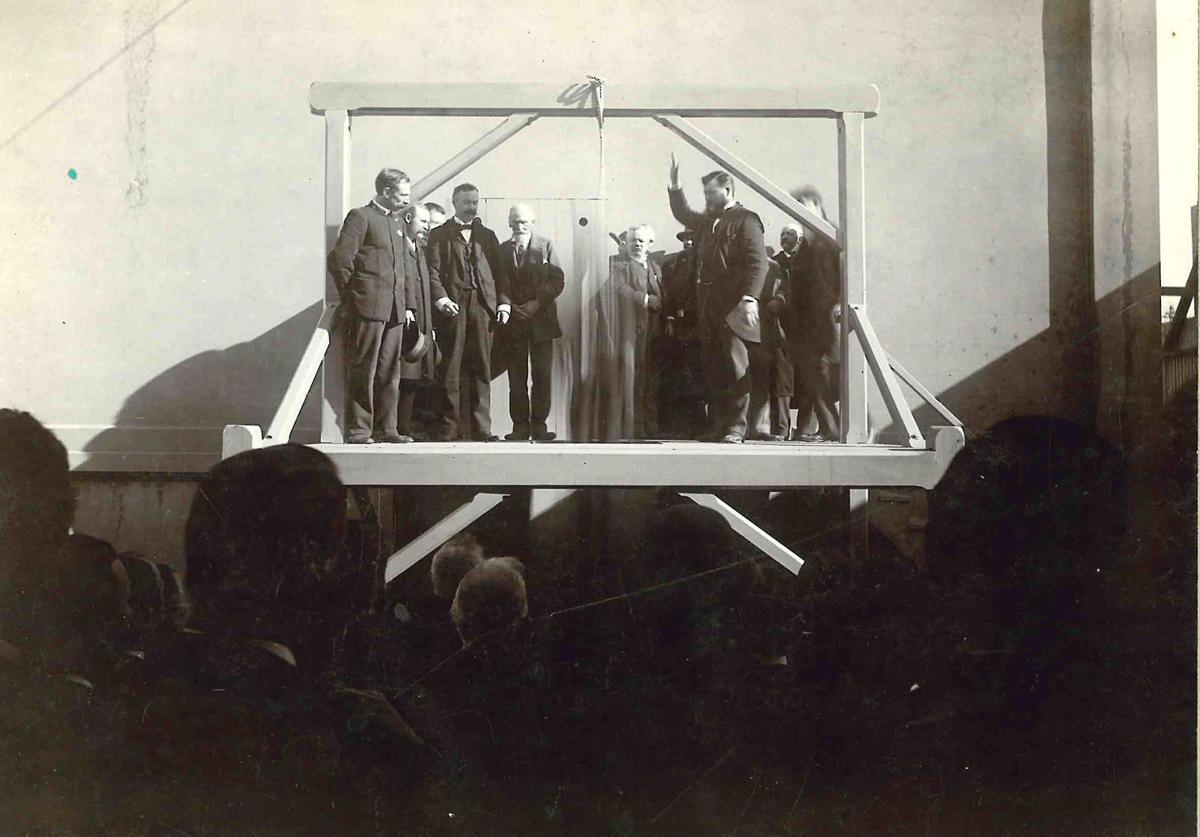 A photographer captured this image of the hanging of William Roe at the Napa County Courthouse in 1897. 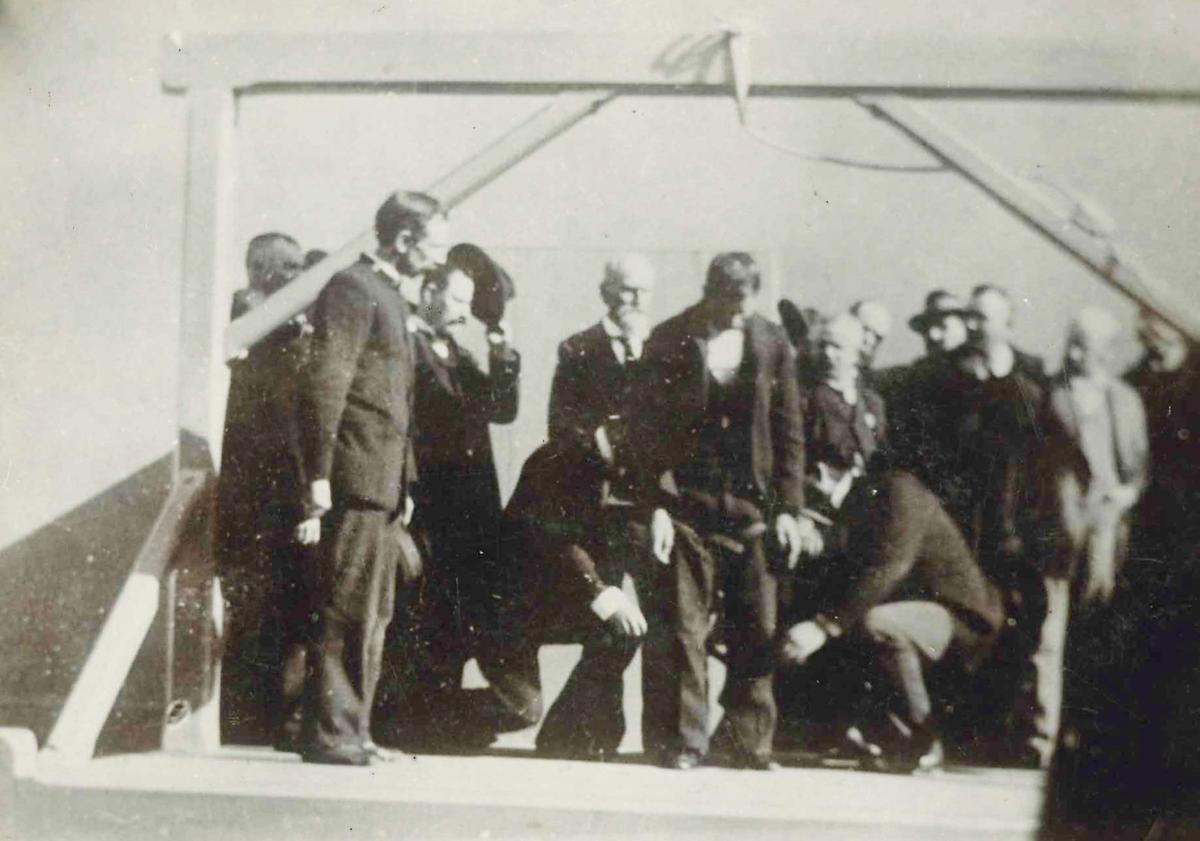 William Roe is shown here being prepared to be hanged for the murder of Lucinda Greenwood. The scaffold has been reassembled at the museum at the Napa County Sheriffs' office. 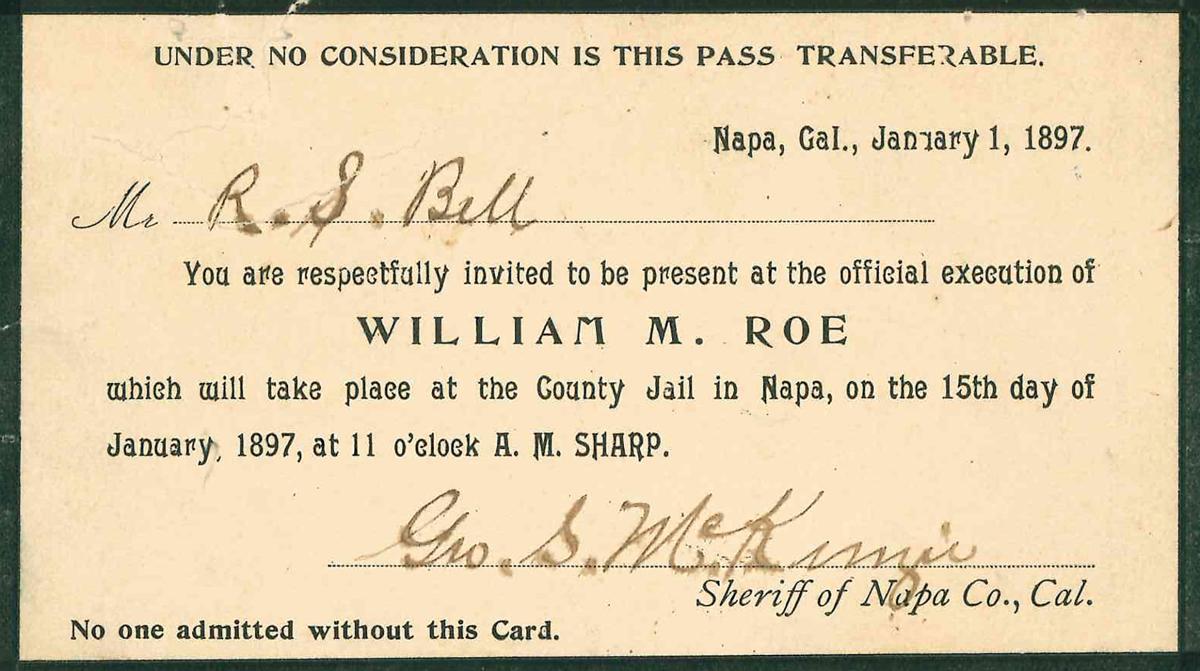 Invitations were issued to William Roe's execution, the last one held publicly in California.

Do you believe in ghosts? I think most of you would say no. Oh, we like to tease about it, read ghost stories, see movies and even spend nights in haunted hotels.

You might remember my story about our stay in the haunted St. James Hotel in Cimarron, New Mexico. I mentioned I would have some more ghost stories in the future. Well, as promised I have some new ones that I am just dying to share with you (pun intended).

Some people believe that earthquakes may wake up old dead spirits. They do not like being disturbed, and start prowling around their abode. You might not see them but you may get a cold chill up your spine. Your gut is telling you something strange and unknown is happening.

If you go by the historic courthouse in Napa, you will see white plastic wrap protecting it against the elements. Long steel beams are holding the high walls in place. The crew is very happy to have finished this part of the repair job. Perhaps this pause in construction will give a certain spirit time to heal, relax and go back to sleep. It probably did not like such a rude awakening, just as our citizens did not like being shaken so hard that early morning.

Recently, there was a man working on the third floor of the court house. He was in a little room adjacent to the large third floor attic where the old gallows used to be stored. There is a stairway behind the chimney and the little room is almost like a another floor but is just a low crawl space. A burly construction worker was working near this small room and the other workers were across the attic but still close by.

The construction crew spent weeks suffering in silence and feeling uncomfortable in the attic. Soon, they started talking to each other and sharing their concerns. You know it takes time for men to finally admit their feelings. They talked about the cold areas, a chill in the air, and they didn’t like it. The big man near the small room told them that his area was much worse and he didn’t know what was wrong.

He was embarrassed to tell his boss. But soon he and the other men had some very frank conversations about the attic and how they felt working up there.

The foreman told me about his meeting with his men, including the big man who was working in the small room. He knew how hard it was for him to come forward and admit his fears. They were long-time friends; he had known him for years and he believed him.

Perhaps these sensations were the result of overactive imaginations. One person makes a statement and others agree. Soon everyone thinks and feels the same way. A cool breeze or an aftershock can stir up and reinforce these thoughts and feelings.

Or they might have felt the presence of the late William Roe. He was the last man publicly executed in California when he was hung in Napa on Jan. 15, 1897. The gallows and the public viewing stand were built next to the courthouse on the Coombs Street side. The Hall of Records, where the jury assembly room now stands, is on this location.

There have been stories floating around about the ghost of William Roe for years. There are some reports that he told his hangman that he was coming back after his execution. So I called the Napa County Sheriff’s Office located on Airport Boulevard to make an appointment with Capt. Steve Blower who is in charge of their museum. The gallows where Roe was hanged used to be stored in the attic of the courthouse. My husband remembered seeing the disassembled stack of lumber with a platform and trap door back in the early 1980s when he and his bailiff went up into the attic. The gallows have been reassembled and are now located in the Napa County Sheriff’s Office museum.

This museum contains many gruesome, but interesting, things from Napa’s past criminal history. The rope, leather strap and hood used in the execution are there with the gallows along with photographs and other exhibits from days past. Capt Blower was very helpful as he told me the complete story of the Greenwood murder, how Roe was finally caught after a few years, tried, convicted, and hanged. He also made copies of all the photos and information for me. If you would like to visit, please call for an appointment.

As you drive down Airport Boulevard on the way to the Sheriff’s Office you will see the large white Victorian house on the right. This is the Greenwood home where the gruesome murder of Mrs. Greenwood took place. The Greenwood’s home was moved to its present location when the Doctors Company acquired the original site across Highway 29.

In Todd L. Schulman’s book, “Murder and Mayhem in the Napa Valley,” you can read details about the murder and reports of sightings of Lucinda Greenwood’s ghost at the Doctors Company building.

It is told that William Roe’s bones were dried on the roof of a downtown building. His skeleton was eventually donated to Napa High School for use in the biology classroom. It disappeared in the 1960s, and nobody knows where it went.

This is not the first time people have had ghostly experiences in the attic of our old courthouse. I have collected some other stories from people who have worked there.

I recently spoke on the phone with the man who was in charge of putting in a new computer system in the courthouse about 25 years ago. I will call him “Jerry.” The third floor and attic needed days of preparation for the installation of the new computer system. The men made lots of noise building shelves, adding supports, pulling things out and installing pipes for the connecting wires downstairs.

Jerry spent many late evenings there with members of the court staff going through the plans and making decisions. He was there alone many evenings past midnight. Yes, it was creepy but nothing frightened him. He never saw or heard anything. It was just work as usual.

Next, the electrical system needed to be connected from the attic to the lower levels. His expert electrician started one evening about 9. The courthouse has to be locked when not being used. So when the electrician went to work, Jerry locked the door behind him. Jerry was in charge and wanted to be close by, so he went to dinner across the street.

After some time, Jerry’s phone rang and he answered it. A man was shouting into Jerry’s ear. At first, Jerry almost hung up; he could not understand who it was or what this man was saying.

Suddenly the clear voice of the electrician yelled, “I want out of here. Come get me. Let me out NOW.”

Jerry quickly walked over to the courthouse and saw his electrician standing behind the door, waving his hands, mouthing words with his nose against the glass. His face as white as a ghost. He quickly unlocked the door and the electrician fell into his arms and was hysterical.

When composed, the electrician explained that he started hearing things, like footsteps and noises. He thought that Jerry had come back to do some work. He called out but there was no answer. He walked around, found nothing and went back to work. Soon, he heard the noises again. This time, he felt a cold chill and soon he was in a cold spot. His flashlight beam showed nothing but the sounds continued. That was enough for him. He wanted out.

He ran down two flights of stairs as fast as he could. He started toward the front door but something made him stop dead in his tracks. He saw nothing but he knew something was between him and the front door. He turned quickly and raced to the side door at the corner of Second and Coombs streets and called Jerry to get him out. He wouldn’t work at night after that, but the computer system was eventually completed.

Here is another story I heard from Georgine Larsen, who was the assistant court administrator. Years ago, a jury was deliberating late into the night. She had to stay at the courthouse, as this was part of her job. She was working at her desk and thought she heard steps on the stairs.

The jury was in the jury room and no one else was in the courthouse. She looked outside her door, went to the stairs but no one was there. Thinking she was mistaken, she went back to her office. Soon it started again. She thought there must be an attorney, judge or bailiff out there. She looked again. Still, no one was there. Finally she decided that she must be imagining things. But she still wonders to this day.

My husband tells me he never heard or saw any spirits during the 23 years he worked in the old courthouse. But he is a cynic and wasn’t usually there late at night. So, does the ghost of William Roe roam the historic courthouse?

The jury is still out and it will be up to you to be the judge.

Lynne Champlin, Coffee, Tea and Me: Creatures of Habit (or who controls your TV remotes?)

Lynne Champlin sets out to master the TV remote controls.

Lynne Champlin, Coffee, Tea and Me: If shoes could talk

What kind of conversations would you have with your shoes these days?

Lynne Champlin, Coffee, Tea and Me: Creatures of Habit (or who controls your TV remotes?)

Lynne Champlin sets out to master the TV remote controls.

A photographer captured this image of the hanging of William Roe at the Napa County Courthouse in 1897.

William Roe is shown here being prepared to be hanged for the murder of Lucinda Greenwood. The scaffold has been reassembled at the museum at the Napa County Sheriffs' office.

Invitations were issued to William Roe's execution, the last one held publicly in California.