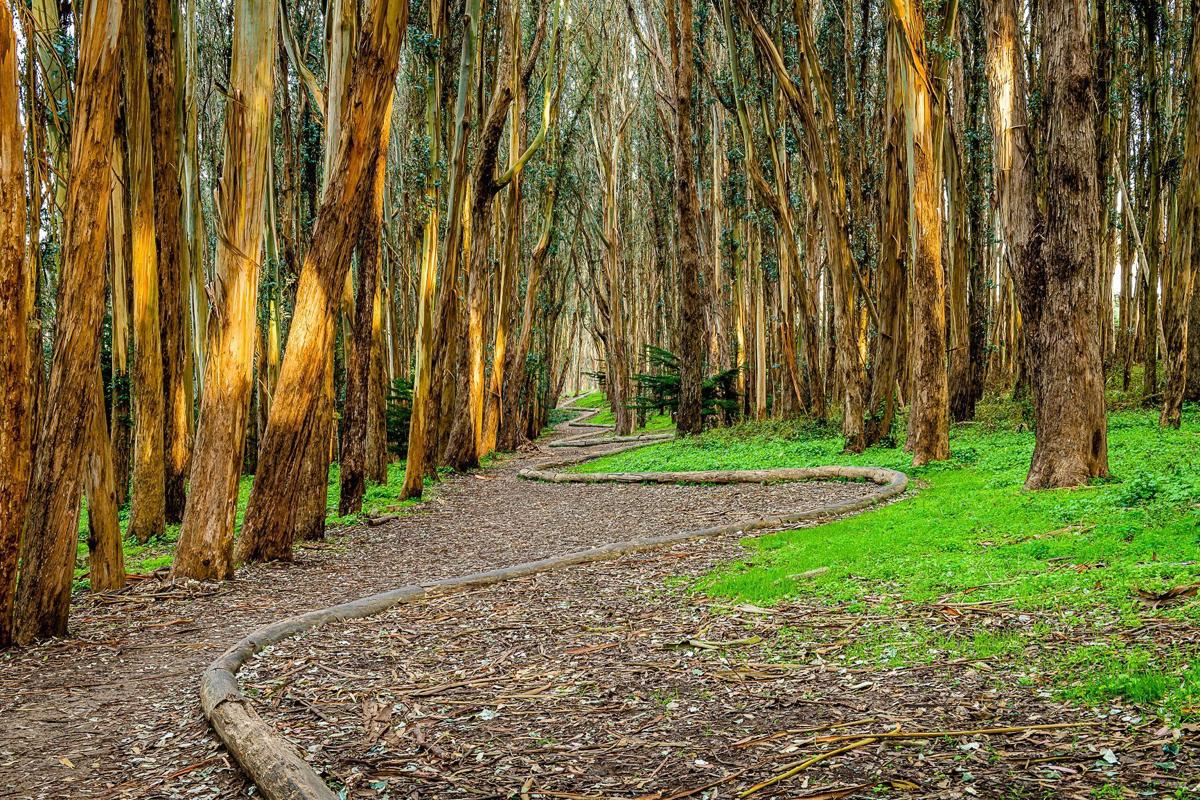 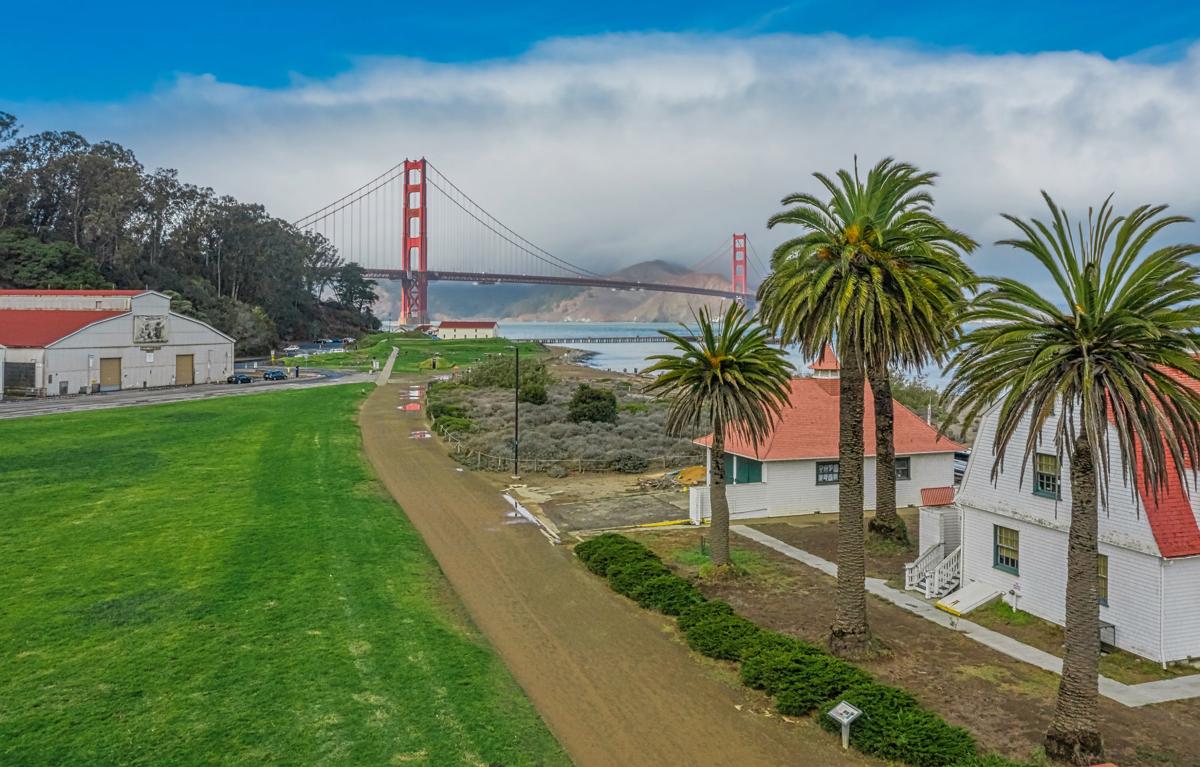 The Golden Gate Bridge as seen from the San Francisco Presidio, 1,500 acres of history and nature in the urban heart of a city.

When I stepped out of my car near the Upper Ecology Trail in the Presidio, heading for my lodging at the Inn of the Presidio, the history of the place was palpable.

I could feel the layers of those who had lived there, from the Ohlone Indians to the Spanish and Mexican soldiers and their families. The silence was dense, the late afternoon mist hovering but held at bay by the thin sun. The towering eucalyptus and ferns along the trail beckoned. I had already begun to feel refreshed, surrounded by history and nature, 1,500 pristine acres of it, in the urban heart of San Francisco.

A military post for over 200 years, first Spanish, then Mexican before the United States took it over at the end of the Mexican-American War, the Presidio became a National Park in 1994, open to the public. Army buildings became museums, restaurants, offices, and homes. Trails, now totaling 24 miles, were refurbished and trees planted to restore the historic forest.

The Inn at the Presidio, like 450 other buildings in the park, is on the National Historic Register. The carefully restored red brick and white wood-trimmed building was once an elegant residence for bachelor officers, and today welcomes guests to its 22 rooms and public spaces, some of them with views of the Golden Gate Bridge.

At four p.m. each day, guests are invited to gather in the reception area for wine and hors d'oeuvres, which was where we headed after checking into our room and depositing our bags. Several different California wines were on offer, as well as a large selection of cheeses, fruits, bread, and crackers. It would have been easy to settle in by the cozy fire and make of meal of it.

The Social Club Exchange, a restaurant in the Presidio was open, with a welcoming menu of specialty cocktails and hearty favorites from pasta to braised beef ribs.The spacious outdoor patio has heaters for when it’s chilly, which we appreciated, and umbrellas for sunny days. Another option would have been the popular Sessions restaurant

The next morning, the famous San Francisco fog was wisping across the Golden Gate Bridge. Breakfast is now served to the rooms on trays; had it been later in the morning, we could have had our breakfast on the Inn’s patio outside, where chairs and tables circle a fire pit.

Although we were tempted by the Walt Disney Family Museum, we opted instead for a long, refreshing hike into the forest, breathing deeply of the moist sea air scented with eucalyptus and damp earth.

There’s so much to be discovered at the Presidio that it would take several days to explore it all. On the other hand, escaping into the nurturing space for a simple overnight getaway or even a day trip, makes it easy to enjoy the refreshing atmosphere of the historic green space.

I grew up in southern California, where avocadoes and bacon sandwiches, tacos and enchiladas, and chile con carne were part of my mother’s everyday repertoire. On special occasions, we might go to lunch at a tea room, for a ladies lunch. I always opted for the oh-so-fancy avocado half stuffed with shrimp. Her take on most dishes was pretty straightforward, like others of her era, but I grew up appreciating that California had once belonged to Spain and later to Mexico, and that many of the foods we took for granted, like oranges, figs, grapes, and olives came from Spain by way of Mexico and the missionaries. Other foods, I learned, like avocadoes, tomatoes, chilies, beans, and corn, were native to Mexico, Central, and South America. All in all, it was a tasty childhood.

I live in Northern California now on part of what was once a Mexican land grant. The property came with 100-year-old olive trees and a smattering of old orange trees, and I like to think they’re descendants of early plantings. We’ve planted more oranges, some grapes and always have a big garden full of tomatoes, peppers, zucchini, and squash, so I feel very much at home with that combination of the Old World and the New World, and I still cook some of those basic, Spanish/Mexican/California dishes my mother introduced me to.

Cheese and Onion Enchiladas with Olives

This is a California favorite dating back to the Rancho days. You can see the mix of Mexican influence with the tortillas and the chilies and incorporation of the olives, whose original trees came to California from Spain. You can use either black or green olives, cheddar, or Monterey Jack, both of which were produced in Northern California in the mid-1800s.

½ teaspoon Mexican or other oregano

½ teaspoon Mexican or other oregano

For the onions, heat the 2 tablespoons of olive oil in a frying pan over medium-high heat. When the oil is hot, add the onions and sprinkle them with salt and oregano. Reduce the heat to medium, and cook, stirring occasionally until the onions are very soft, but not browned. Set aside

To make the sauce, heat the 2 tablespoons of olive oil in a saucepan over medium-high heat. When the oil is hot, stir in the flour, chile powder, and cumin. Keep stirring until paste forms. Gradually whisk in about a cup of the water or broth, ensuring the paste is dissolved. Add another cup. Reduce the heat to medium-low and simmer until the sauce has thickened, about 20 minutes. If too thick, add more water or broth. The sauce should be the density of heavy cream. Set aside.

In a dry frying pan over medium-high heat, warm the tortillas, one at a time, turning once, until soft and pliable.

Thinly cover the bottom of an 8-inch by 10-inch baking dish with a little sauce.

Pour some sauce on a plate. Dip a tortilla in the sauce, then lay it in the baking dish. Add a spoonful of onions and 1 or 2 of cheese. Fold one side in, then the other. Turn so the seam side is down. Repeat until all the tortillas have been filled and are placed snugly in a row in the baking dish. Spoon over all the remaining sauce to completely cover the tortillas. Top the baking dish with aluminum foil and bake until the sauce is bubbling and the enchiladas warmed through. Remove and let stand 5 minutes before serving, using a spatula. Garnish each enchilada with a spoonful of sour cream.

This is one of my favorite salsas, one I like to serve with barbecued meats and tacos. It’s rich, with a lingering heat. I usually double or triple because it’s so popular.

Juice of one lime, about 1 teaspoon

Over medium-high heat, bring a medium saucepan of water to a boil. Add the tomatillos and boil for 5 minutes. Drain and chop. Place in a bowl. Seed, devein and finely chop the chilies. Add to the bowl with the tomatillos, along with the onion, garlic, cilantro, and lime juice. Add the avocado and mash but leave chunky. Makes about 1 cup

These are so easy to make but are elegant nevertheless, and perfect for lunch or a first course.

2 tablespoons lemon juice plus one lemon, quartered, for garnish

In a medium bowl, combine all the sauce ingredients and whisk to mix well. Set aside.

In a medium bowl, combine the shrimp with the lemon juice, cayenne, and salt and toss gently.

Divide the lettuce among 4 salad plates. Drizzle with some of the sauce. Tuck an avocado half into the lettuce on each plate. Fill the avocado cavities to overflowing with the shrimp mixture and dot with a tablespoon of the sauce. Garnish each plate with a lemon wedge. Serve any extra sauce on the side.

Photos: A look back at 2021 Napa County graduation celebrations

Georgeanne Brennan is an author who lives on a farm in Northern California. Learn more at her website, georgeannebrennan.com.

Harbor House: A world away

At Harbor House Inn in Elk, California,  a meal from that first taste to the last bite of dessert is an education in flavors and the senses.

A road trip through looping down through Southern California and back north again, reminds one of  diversity, bounty and beauty of the Golden State.

Mendocino's North Coast is home to some of the best mushroom hunting around and Georgeanne Brennan went out foraging to see what she could find.

The Golden Gate Bridge as seen from the San Francisco Presidio, 1,500 acres of history and nature in the urban heart of a city.