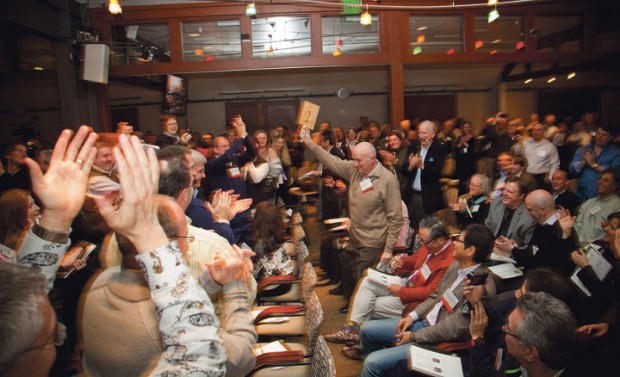 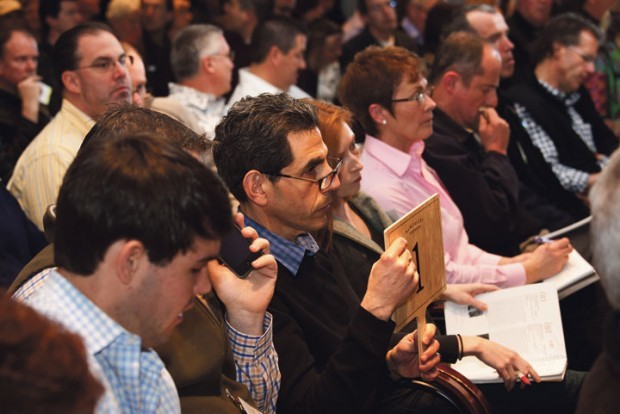 Gary Fisch, of Gary's Wine & Marketplace in New Jersey readies paddle No. 1 for the first of many successful bids at Premiere Napa Valley 2011. 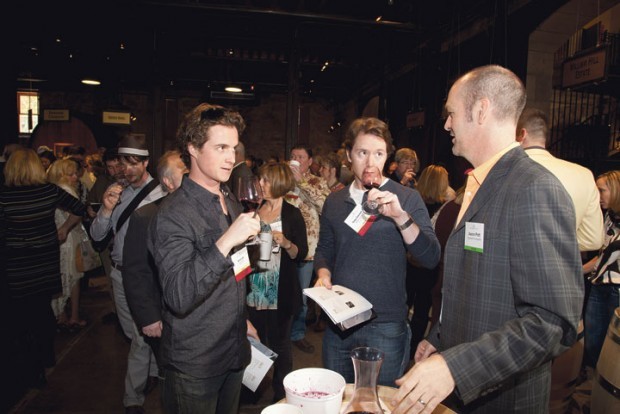 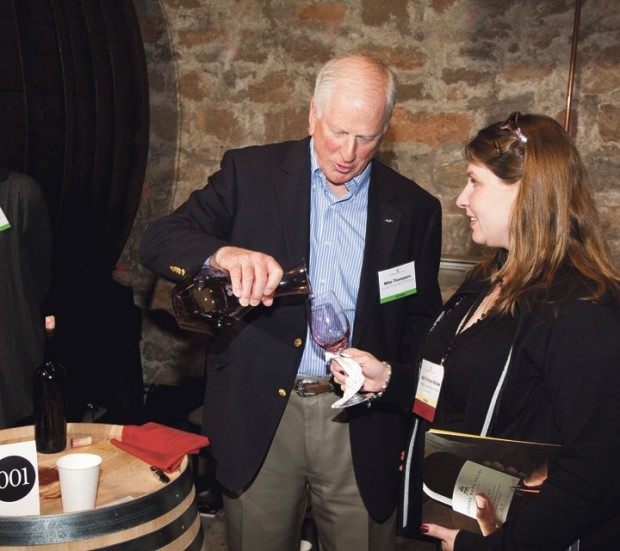 Made by respected winemaker Celia Welch, the five-case cabernet lot was won in spirited bidding by Ichizo Nakagawa, owner of Tokyo-based Nakagawa Wine Company. Noting he intended to take home the Scarecrow wine “no matter what,” Nakagawa received a standing ovation from a crowd of retailers, restaurateurs and vintners attending the trade auction at the Culinary Institute of America at Greystone in St. Helena as auctioneer Fritz Hatton brought the gavel down to end bidding. Two years ago, a similar Scarecrow lot cost him $80,000, the previous record paid for a single lot of wine at the February auction.

Scarecrow proprietor Bret Lopez was taken aback by the record price paid for the five-case lot. “We never dreamed we’d reach this stature ... (winemaker) Celia Welch is ... a humble genius who coaxes the sublime flavors from the old men,” he said, referring to the 66-year-old J.J. Cohn estate vines that yield just a half-ton per acre each harvest.

“Saturday’s auction totals reflect a continuing trend of improved sales in the market for fine wine from the (Napa Valley), as well as optimism for the coming months and years,” noted Kathleen Heitz Myers of Heitz Wine Cellars, president of the sponsoring association’s board of directors. “You could feel the buzz from the time the doors opened.”

Beaming over the success of this year’s auction — as well as the birth of a son earlier in the week — was auction chairman Michael Honig, of Honig Vineyards and Winery. (Honig’s wife, Stephanie, gave birth to son Sebastian Louis, five days prior to Premiere Napa Valley.)

“The soul of Premiere is the opportunity to network ... in making new and reinforcing existing relationships with our key ambassadors in the wine trade,” Honig said following the three hour auction. “The Saturday event sets the stage for a lot of business being done beyond the auction. It’s great for our vintners and great for these trade who sell our wine to their customers.”

Prior to the auction, nearly 1,000 retailers, restaurateurs, distributors, brokers and media from all across the country — as well as Japan and the United Kingdom — gathered mid-morning on the second level of CIA Greystone to taste the 200 wines that were put on the block in the afternoon.

This year’s total take was about 6 percent higher than 2008’s record-setting $2.2 million, indicating that confidence in investing in Napa Valley wines is strong, auction officials indicated. Overall, this year there were 68 successful bidders — a third of whom were first-time attendees — who purchased 1,530 cases at an average case price of $1,546, an increase of 37 percent over the recession-stressed take of 2009 and 20 percent more than 2010’s average case price, a NVV spokesman said.

Retailer with the most prestigious list of Premiere wines in the world, Fisch counted among his successful bids last weekend top-grossing lots from Ovid, Duckhorn Vineyards, Robert Mondavi Winery, Blackbird Vineyards and the chair’s lot, from Honig Vineyard & Winery.

In addition to Scarecrow, the Top 10 list of auction lots included:

• Schrader Cellars, $45,000 for five cases of a Thomas Brown cabernet sauvignon blending fruit from a pair of prestigious Oakville vineyards.

• Ovid Napa Valley, $44,000 for five cases of cabernet sauvignon from three distinct blocks on Pritchard Hill, blended with a splash of merlot by winemaker Andy Erickson.

• Levy & McClellan, $40,000 for five cases of cabernet franc in a debut lot from winemaker Bob Levy and his wife, Martha McClellan.

• Shafer Vineyards, $38,000 for five cases of a perennial favorite, cabernet sauvignon from the Sunspot Vineyard in Stags Leap District.

• Robert Mondavi Winery, $35,000 for 20 cases of cabernet sauvignon winemaker Genevieve Janssens made from fruit harvested in the Monastery block of To Kalon Vineyard.

• Duckhorn Vineyards, $32,000 for 20 cases of cabernet sauvignon from the acclaimed Three Palms Vineyard.

• Reynolds Family Winery, $32,000 for 20 cases of cabernet sauvignon from the Annapurna Vineyard in Stags Leap District.

Premiere Napa Valley was initially launched in 1997 as the “bake sale” of sorts to help fund the trade association’s efforts to promote and protect the Napa Valley appellation.

From seven founding members in 1944, today Napa Valley Vintners represents nearly 400 Napa Valley wineries and is regarded as a leader in the industry worldwide.

Don't get scammed out of your retirement

Could this be the future of sustainable housing?

Could this be the future of sustainable housing?

It’s a real privilege to be invited to Premiere Napa Valley, to taste and analyze the wines that have attracted so many buyers to the valley f…

Gary Fisch, of Gary's Wine & Marketplace in New Jersey readies paddle No. 1 for the first of many successful bids at Premiere Napa Valley 2011.