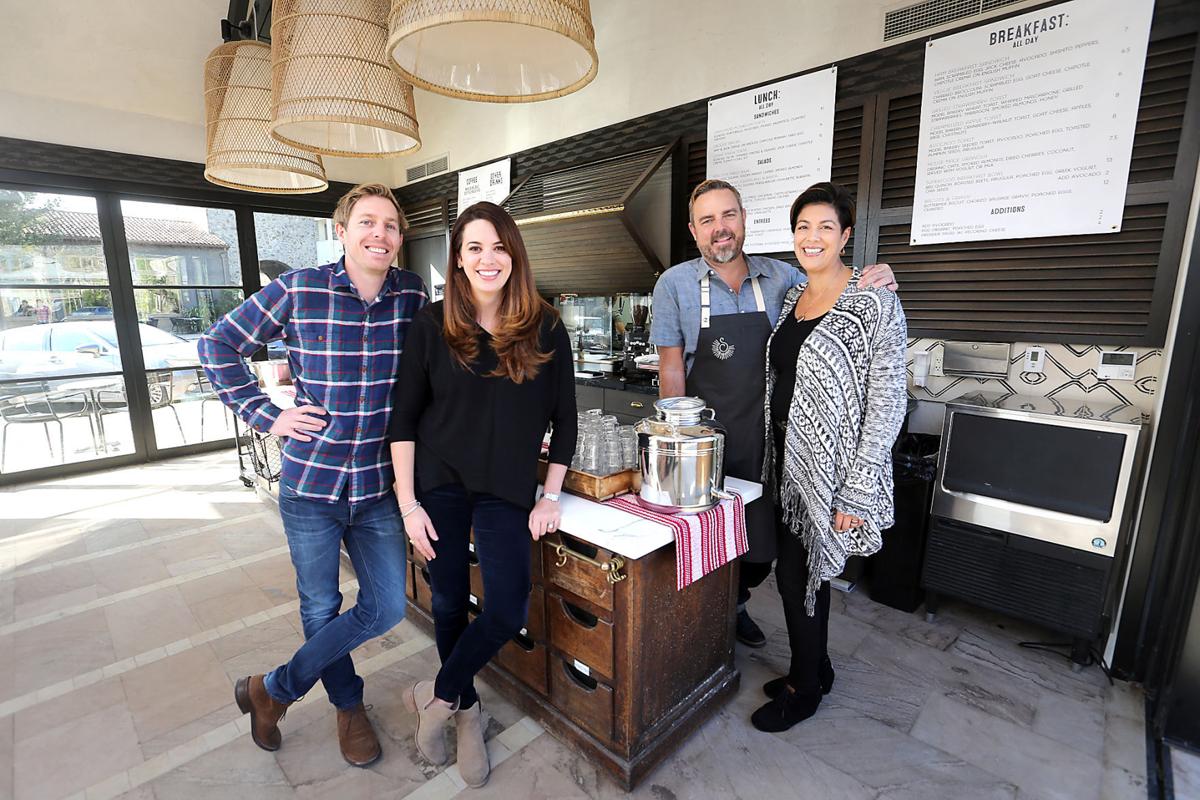 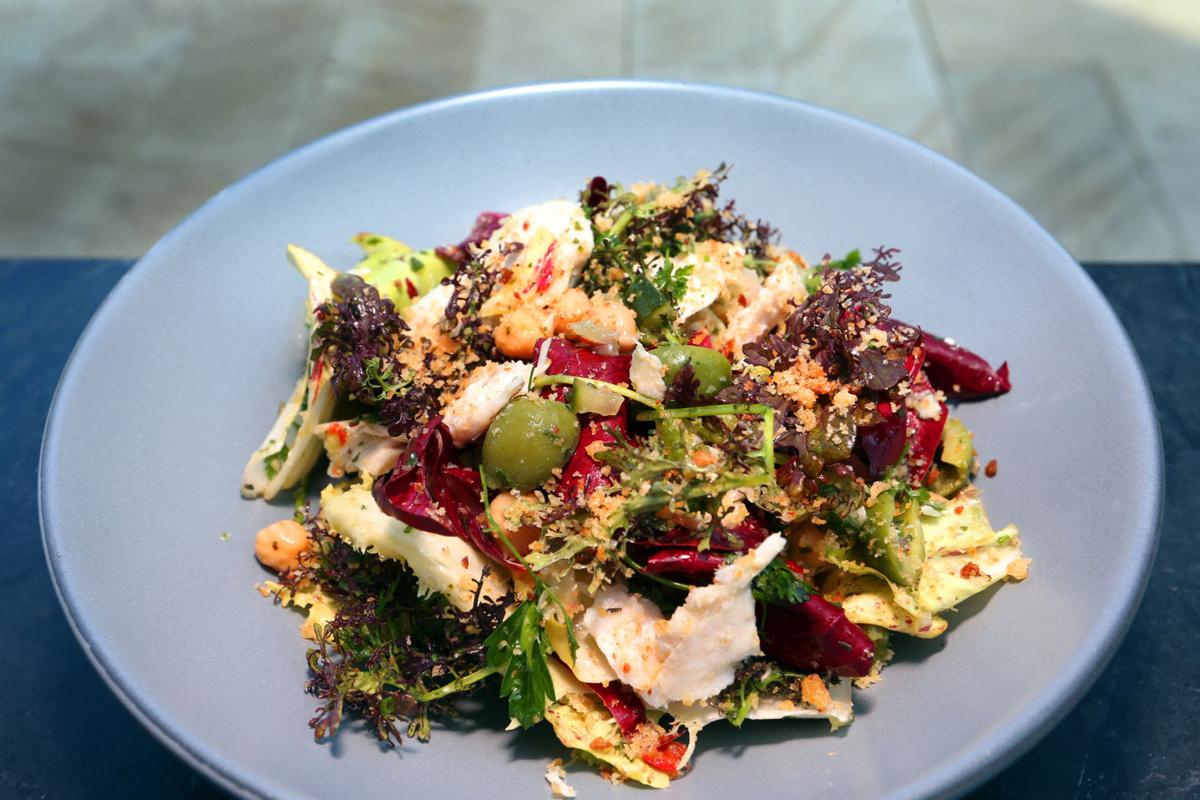 Tuna confit with chicory, chickpeas, cucumber and preserved Meyer lemon vinaigrette from Southside Yountville, which has opened at Stewart Cellars. 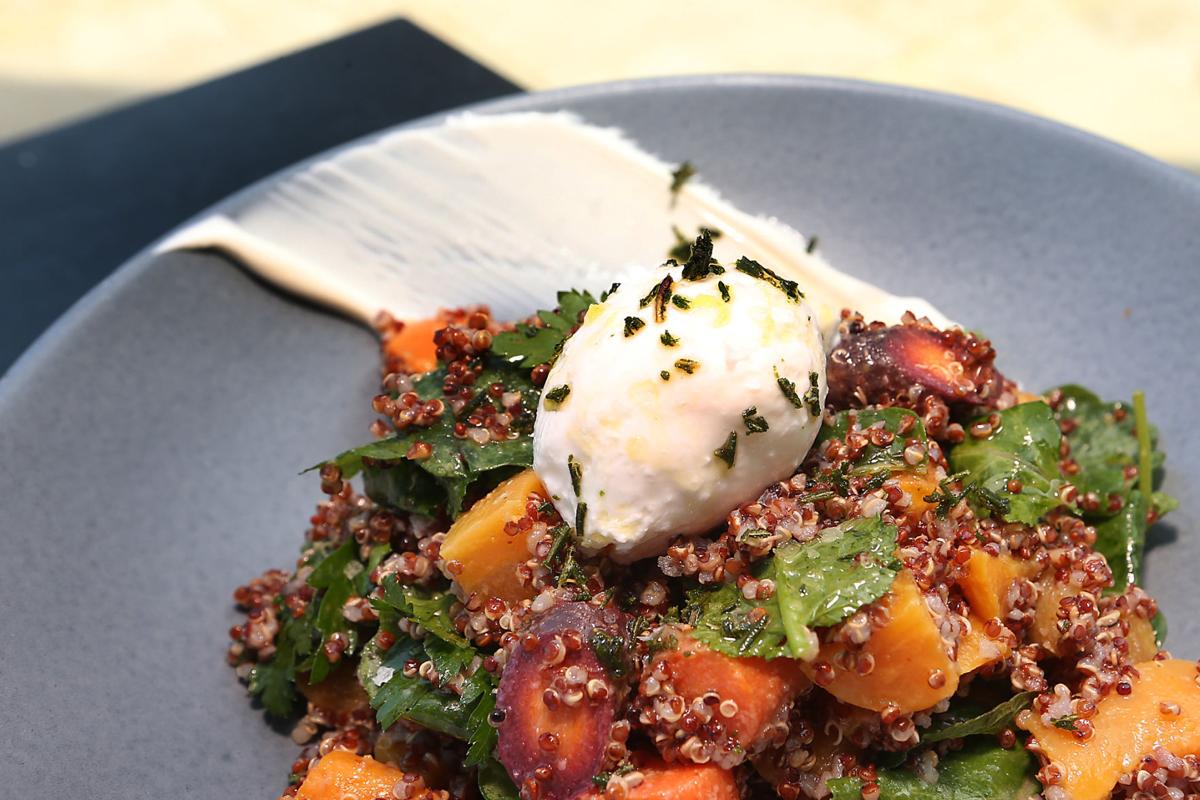 A superfood bowl from Southside Yountville, which has opened at Stewart Cellars. Quinoa, carrots, beets, kale, live cultures and a farm egg. 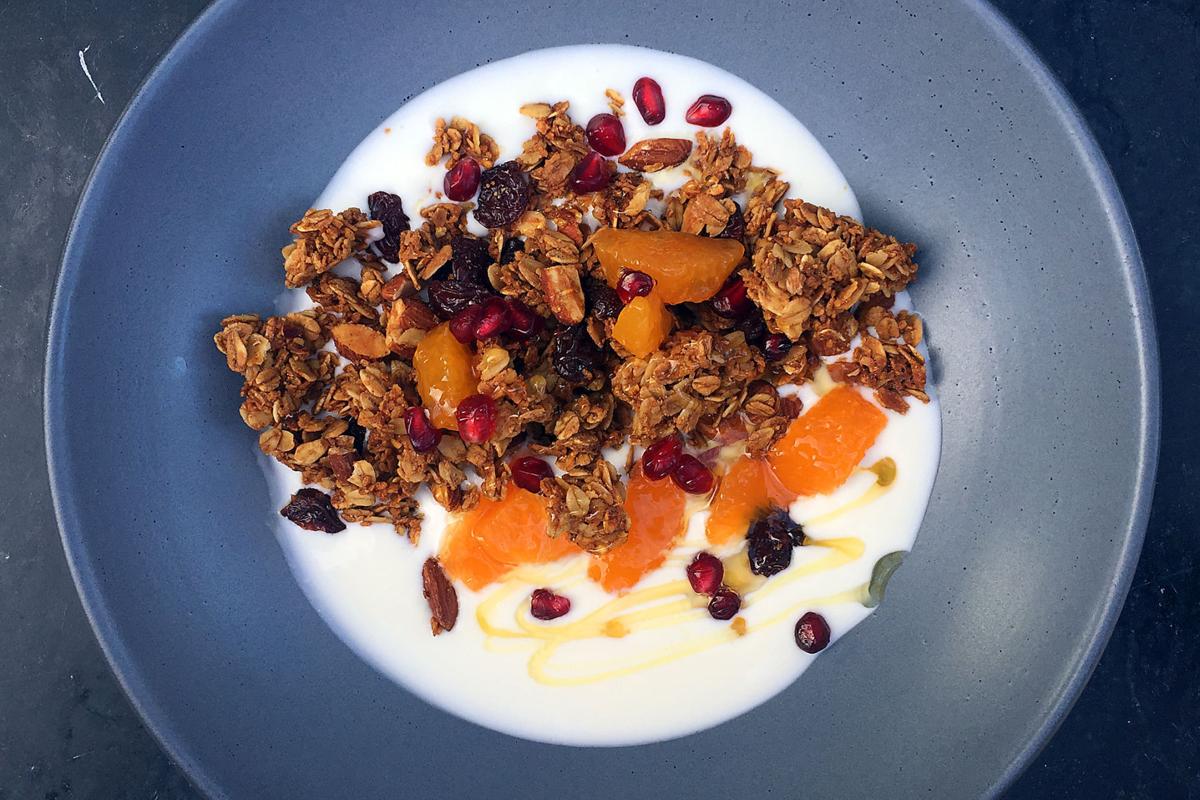 This is house-made granola with organic oats, smoked almonds, dried cherries and coconut served with yogurt or milk from Southside Yountville, which has opened at Stewart Cellars.

On a picture-perfect Monday morning, we gathered at Stewart Cellars in Yountville to sample the fare of its new Southside Cafe.

The Robinsons are the chef/owners of the immensely popular Southside Cafe on Old Sonoma Road in Napa.

The fare, much like that of the Napa cafe, displays a fresh, local and authentic approach filled with colorful, textural and aromatic elements. The wines shined in a seamless orchestration of layers and distinctive qualities.

“This is the ideal grab-and-go for breakfast,” Irma said. Complete and satisfying, the mix of granola and yogurt had a bright layer brought by local wild honey that enhanced the crunchy layers of nuts and fruit.

It was matched with a zippy Napa Valley sauvignon blanc.

A hearty play on biscuits and gravy followed next but not any biscuits and not any gravy. The biscuit mix is Chef Morgan’s secret weapon, crunchy on the outside, soft and decadent on the inside topped with a sausage gravy with crispy chorizo filling — rich and certainly a dish you will come back for after you try it. This dish was served with the Sonoma Coast pinot noir, which showed bramble, cola and raspberries with a medium body and a long finish.

The last dish was sublime: cake with persimmons and chantilly cream paired with Napa Valley cabernet sauvignon — unexpectedly a great marriage of flavors.

Other featured items on the menu of the new Southside include a variety of breakfast and lunch dishes for all palates. Starting with breakfast available all day, they offer breakfast sandwiches, ham, scrambled egg, jack cheese, avocado, shishito peppers and chipotle crema on English muffin and its vegetarian counterpart, the Veggie Breakfast Sandwich with charred broccolini, scrambled egg, goat cheese, chipotle cream and English muffin.

The breakfast options are complemented by the house-made granola; an unexpected and adventurous Superfood Breakfast Bowl of red quinoa, roasted beets, arugula, poached egg, Greek yogurt and chia seeds, and the Biscuits and Gravy.

The beverages range from Wrecking Ball Coffee Roasters offerings from espresso, mocha, cappuccino to an iced almond horchata latte and an agua fresca.

“We’ll be making Horchata and Jamaica agua fresca in house,” general manager Evan Dodge said. There will be Kilogram Tea, English breakfast, tumeric tonic and Blend 333 mint, to name a few. Mexican coke, as well as Mexican hot chocolate and iced tea, will also be available.

An intriguing aspect will be the wine in that they will be offered from Stewart Cellars tasting room. It will be advantageous to the cafe-goers to have wines of this caliber available to enjoy with their selections.

“The menu will evolve but seasonally and up to par with Yountville,” Chef Morgan said. “We might even have foie gras in a few months.” The cafe itself has a great, cozy feel, and doors on every side make it feel larger than it is.

Irma Robinson, who lived in Australia, said this style of cafe is popular and exciting in Melbourne. She explained how this casual eateries take coffee very seriously, and it is something they wanted to pay homage to. “We tried multiple coffee roasters until we settled for Wrecking Ball, we found it to be balanced, rich enough, just right,” she said.

Stewart Cellars was founded in 2000 by patriarch Michael Stewart, who enlisted winemaker Paul Hobbs, still a consultant. The family venture includes Caroline Stewart Guthrie, who decided to venture into winemaking and landed in Argentina at Vina Cobos where she worked under Paul Hobbs’ direction. These days, she oversees the winery and her kids. Blair Guthrie, Caroline’s husband, is in charge of the winemaking. They both met while working at Crossbarn winery in Sonoma. James Stewart completes the circle.

Southside, at 6752 Washington St., is open 8 a.m. to 3 p.m. every day. Seating is limited inside but enjoyable most of the year in the tables in between buildings. For more information, call 707-238-4632 or email info@southside.

Lower your cholesterol by eating these foods

Lower your cholesterol by eating these foods

Burger King is trying to get a leg up in the chicken sandwich wars by taking a not-so-subtle dig at rival Chick-fil-A's fraught history with the LGBTQ+ community.

Taste of the Valley: News from Cole's Chop House, TruffleTV and a Father's Day special

Diane de Filipi shares a history of cherries and recipes she has created for cherry season.

Restaurant chain Chipotle raised its menu prices by about 3.5% to 4% to cover the cost of higher wages for employees, the company has announced.

By deciding to raise animals on a farm, a farmer takes on the responsibility of that animal’s life, caring for them while they live, and, yes, killing them when their time has come.

It's picnic season again. Even people who are not good cooks can take this opportunity to avoid embarrassment by making their own dishes for the occasion.

Betty Teller writes about jack hammers, holes in her road and cucumber soup.

Recipe of the Day: Lobster Roll

There's no reason why lobster rolls should be relegated to beachy vacations and road trips through New England. The essence of the lobster salad is super easy to replicate at home.

Taste of the Valley: Kitchen Door closes till fall

However you enjoy the salad — it can be eaten hot, cold or at room temperature — you’ll want to toss the potatoes in the dressing while they’re still warm so they can absorb the flavors.

Tuna confit with chicory, chickpeas, cucumber and preserved Meyer lemon vinaigrette from Southside Yountville, which has opened at Stewart Cellars.

A superfood bowl from Southside Yountville, which has opened at Stewart Cellars. Quinoa, carrots, beets, kale, live cultures and a farm egg.

This is house-made granola with organic oats, smoked almonds, dried cherries and coconut served with yogurt or milk from Southside Yountville, which has opened at Stewart Cellars.