Update: No evacuations ordered due to Sonoma County fire, but traffic delays expected 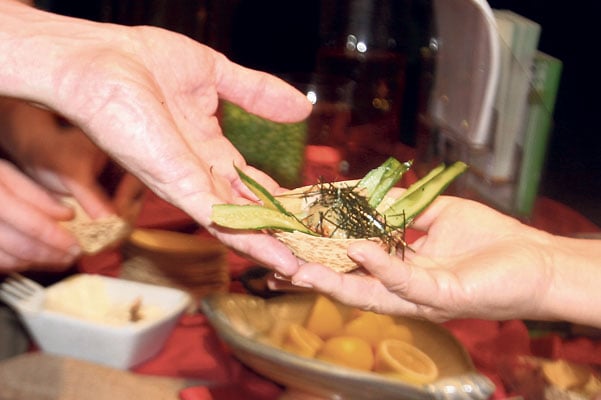 The Culinary Institute of America at Greystone in St. Helena turned the spotlight on Japan for its 2010 Worlds of Flavor conference this month. More than 60 Japanese chefs came to the valley to discuss Japanese cuisine from noodle bars to the elegant, artistic Japanese haute cuisine, kaiseki. 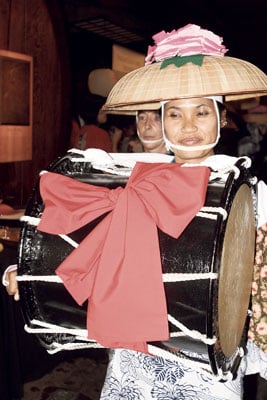 The three-day conference explored the basic elements of the Japanese culinary world, a rising influence for chefs around the world. 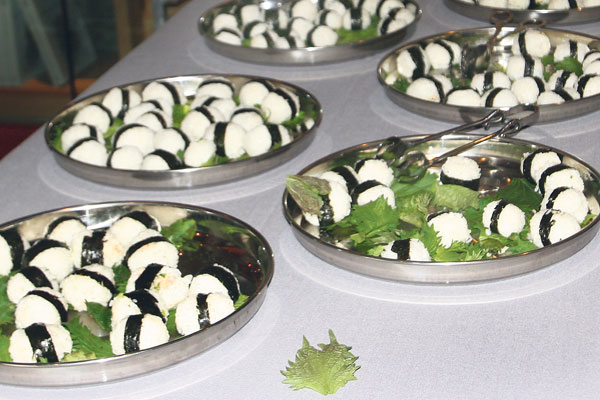 Sushi was one of the more familiar dishes at the conference. 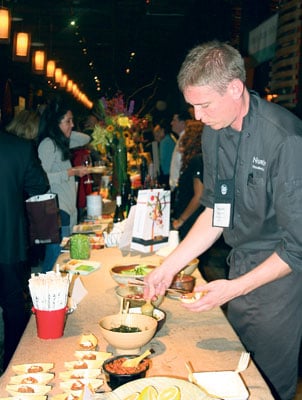 Chef Nick Balla, chef/proprietor of Nombe restaurant in San Francisco, is a Western chef who has studied in Japan. A participant in the 2010 Worlds of Flavor conference, here he prepares sample tastings for the Marketplace.
L. PIERCE CARSON

If you ask most Americans what they know about Japanese cuisine, a healthy majority would recount their experiences eating sushi.

A more knowledgeable few might incorporate other fast food encounters, such as dining on soba noodles or tempura dishes.

Several decades ago, the so-called Japanese dining experience would have focused on sukiyaki, known in Japan as the “friendship dish” as the combination of bite-sized pieces of meat, vegetables, noodles and tofu appealed to foreigners.

Yet, Japanese cuisine is a whole lot more, even though its main ingredients are simply rice, vegetables and fish.

While tradition and innovation are the hallmarks of Japanese cookery, residents of the Land of the Rising Sun have been incorporating aspects of other cultures — mostly those of the Far East — for at least 1,000 years, maintains Yoshiki Tsuji, author and president of Japan’s Tsuji Culinary Institute.

Like America, Japan is also a melting pot, especially when it comes to regional cuisines.

Tsuji was but one of the dozens of speakers and chefs from Japan who took part in “Japan: Flavors of Culture,” the 13th annual Worlds of Flavor conference earlier this month at Culinary Institute of America at Greystone.

The largest and most significant professional conference ever held in the United States dedicated to the flavors, culinary techniques and food cultures of Japan, this fall’s CIA event featured more than three dozen renowned chefs who traveled from Japan to take part.

“Sushi has moved from the  exotic to the mainstream, Japanese noodle soups are regularly included in volume foodservice operations, Japanese fine dining restaurants claim top-tier ratings, and Japanese flavors and culinary esthetics influence the menus and ambience of even non-Japanese restaurants. At the same time, Japan is often less familiar to Americans than Italy, France or other European countries.”

However, Japanese cuisine “has long had an impact on American and European menus,” noted Dr. Tim Ryan, Culinary Institute of America president. As an example, he said “the Japanese food esthetic played a major role in the  development of France’s nouvelle cuisine.”

But in recent years, Ryan maintains “Japan has gone from being an important player to being white hot in significance.

“A recent Wall Street Journal article proclaimed the new global champion in three-star Michelin dining to be Kansai (Japan) — the region that includes Kyoto, Osaka and Kobe. This region now has 12 three-star restaurants, narrowly edging out number two ranked Tokyo at 11 three-stars, Paris at 10 and New York at 4. What a different culinary world for all of us than just 20 years ago.

“The same Journal article reported that the number of Japanese restaurants in North America doubled to 10,000 in the period from 1996 to 2006.”

Ryan said if he and his associates were searching for reasons why America’s youth is knocking on the CIA door to secure an education, “how could  we not highlight the influence of Iron Chef Japan and later Iron Chef America for bringing food ‘battle’ television into the living rooms of millions of families.”

He is certain Japan “will be a big part of CIA’s future, just as it will be bigger part of the future of American menus.”

It’s all about flavor

While we have long held that our taste buds react to foods that are sweet, salty, sour and bitter, experts maintain we have receptors that react to a fifth, a taste sensation called umami.

Umami is best described as a savory taste created by the amino acid glutamate. It can be detected in amino acid rich foods that offer both lingering mouth-feel and body. Umami is not a strongly detectable taste in itself, but tends to accentuate and embolden other tastes. Umami intensifies sweet and salty, and rounds out sour and bitter.

While it’s a little difficult to describe, food experts suggest you pop a chunk of Parmigiano-Reggiano into your mouth. As you chew, the tastes will intensify and fill your mouth with an incredible richness and fullness of feeling and sensation — a taste that lingers on and on. That incredible length and intensity of taste is umami at work.

The Japanese have long known about umami. A number of their basic preparations are based on it. Dashi, for example, used extensively in Japanese cooking, is a soup stock made with dried bonito tuna flakes (katsuobushi), kombu (sheets of seaweed or kelp) and water. Kombu is one of the food products highest in free levels of glutamate, along with nori (seaweed used for wrappng sushi), soy sauce, fish sauce and parmesan cheese.

The use of dashi “adds a necessary layer of flavor to Japanese dishes,” Tsuji told conferees. “Dashi gives (the dish) a high level of umami with zero calories.”

The three-day conference covered a wide range of topics, from mastering dashi to using miso as a flavor enhancer, enjoying ramen and udon at a typical noodle bar to preparing and enjoying Japanese confections.

The event addressed the influence of kaiseki restaurants on world cuisine — upscale eateries serving small, meticulously designed plates that not only foreshadowed France’s nouvelle cuisine but also led to the development of tasting menus in the United States.

Owner of a California izakaya — Nombe, located at 21st and Mission streets in the city — Balla said the izakaya concept came about first in the 1980s in Japan. “They were informal dining and social places patronized by mostly men. Today, everyone goes, for drinks and small bites.

“Initially, they were places to get cheap food, the kind of place where you’d pay one price for all you could eat and drink. In Japan that has evolved into a place to go for good food and drink served in an informal setting. You can locate an izakaya by the red lantern in the window.”

The izakaya first showed up in this country in both New York City and Los Angeles, Balla pointed out. He said they are catching on in San Francisco, with seven opening to date.

“If you wanted to describe the food, you would find grandmother-style dishes and basic sauces ... a lot of popular dishes. In this country, I guess the best description for izakaya would be a mix of a place serving tapas and American dive bar.”

Watch Now: How to plan for retirement

Watch Now: How to plan for retirement

Watch Now: How to keep your phone data safe from hackers

Watch Now: How to keep your phone data safe from hackers

Serves 10 as tasty side dish

The Culinary Institute of America at Greystone in St. Helena turned the spotlight on Japan for its 2010 Worlds of Flavor conference this month. More than 60 Japanese chefs came to the valley to discuss Japanese cuisine from noodle bars to the elegant, artistic Japanese haute cuisine, kaiseki.

The three-day conference explored the basic elements of the Japanese culinary world, a rising influence for chefs around the world.

Sushi was one of the more familiar dishes at the conference.

Chef Nick Balla, chef/proprietor of Nombe restaurant in San Francisco, is a Western chef who has studied in Japan. A participant in the 2010 Worlds of Flavor conference, here he prepares sample tastings for the Marketplace.
© Copyright 2021 Napa Valley Publishing, 1615 Soscol Ave. Napa, CA | Terms of Use | Privacy Policy | Do Not Sell My Info
Powered by BLOX Content Management System from TownNews.com.
You don't have any notifications.