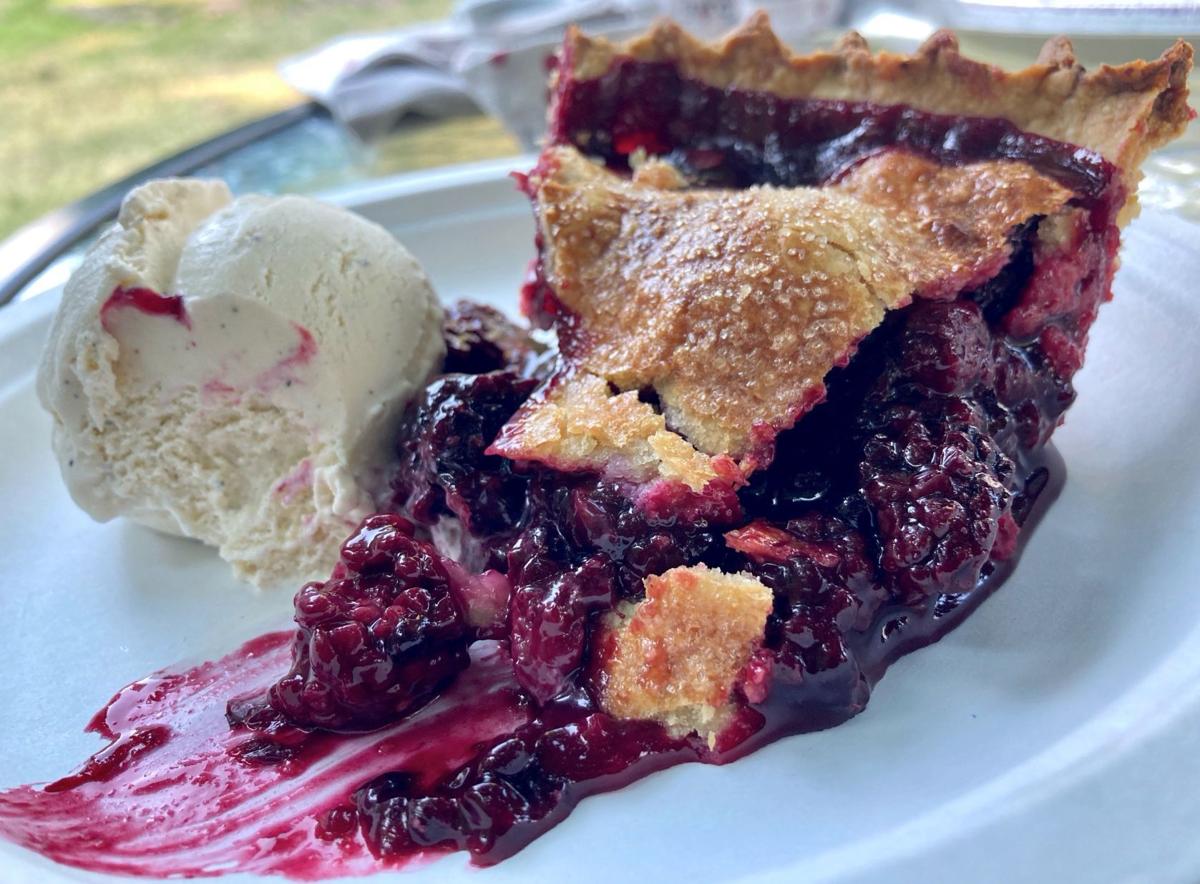 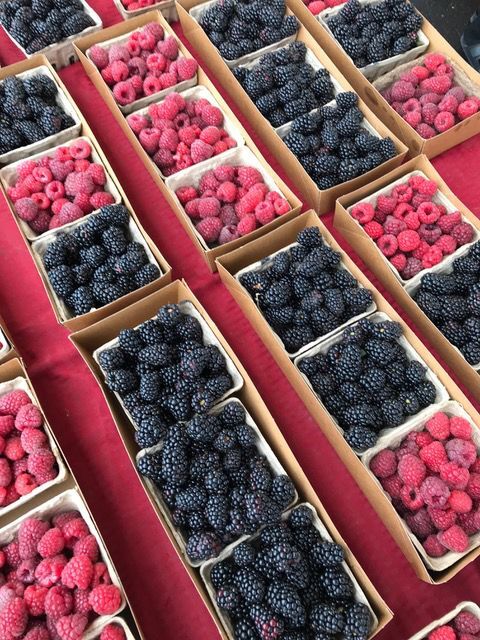 Berries wait for buyers at the Napa Farmers Market.

Home cooking, bread making and gardening are all trending in these pandemic times. All sorts of publications and social media posts are extolling the joys of making your own sourdough starter, providing recipes for one-pot meals and publishing how-to articles on preserving garden vegetables.

Of course, it makes perfect sense that during these stressful times we seek the soothing comfort of food. Food is not only life-giving, it nurtures our soul and keeps things interesting. It’s a conversation piece, a photograph, a memory.

Lately, with berry season in full throttle, I’ve been trying to recreate my mother’s blackberry pie. While my mother didn’t really relish day-to-day cooking for our family of seven, her pies were off-the-charts delicious.

There was never a holiday that my mother didn’t serve multiple pie options and get greatly offended if you didn’t try them all. My mother was my favorite person in the world, so channeling her by making a pie seemed just the right antidote for these uncertain times.

The summer berries from the Napa Farmers Market are delicious in their own right, so mastering my mother’s flaky pie dough was the only real challenge. I recently came across her handwritten recipe, which called for milk instead of ice water and, of course, Crisco instead of butter or lard.

Popular with a lot of pie bakers of my mother’s generation, Crisco was developed by candle maker William Proctor and his soap maker brother-in-law, James Gamble. Back in the early 1900s, the two men were looking for something to replace the expensive lard used in making their soap and candle products. This led to the development of the hydrogenation process, which they used to create crystallized cottonseed oil.

With the advent of electricity, the two men decided to rebrand this white, fluffy and largely tasteless creation as a food product. If it was good enough for soap and candles, why not cook with it? They commissioned a cookbook with 615 recipes requiring Crisco, conducted focus groups and told women their children would have good character and their men would accomplish “big things” because Crisco “promoted good digestion.”

I wondered if I could forgo the partially hydrogenated vegetable oil and still get a flaky, delicious pie crust. I experimented with leaf lard, butter and a combination of the two. I watched YouTube demonstrations of pie making and consulted multiple authoritative cookbooks on crust technique.

On this pie-crust making journey, I learned that it is okay to embrace the food processor (Julia Child), that vodka can tame gluten and make it easier to roll out the dough (Cooks Illustrated), that pounding the dough with your rolling pin helps at the rolling stage (“Hoosier Mama Book of Pie”), that chilling the dry ingredients in the processor bowl will make the dough more malleable (Martha Stewart), and, of course, that everyone unanimously advises not to overwork the dough.

After several attempts and some retooling, I finally made a respectable looking and delicious blackberry pie, one that I believe even my mother would approve. The recipe below is a compilation of all the pro tips as well as the ingredients I found useful and tasty. As you will see, the winning fat for me was butter — high-quality, unsalted butter.

While this recipe is a compilation of several other recipes, I would highly recommend Hoosier Mama Book of Pie by Paula Haney as a one-stop shop for your pie-making needs. Note that you may want to prepare the dough 1 day ahead.

1 tablespoon vodka (or any type of vinegar)

Make the dough: Cut the butter into ½-inch cubes and freeze half of it for at least 20 minutes. Keep the other half in the refrigerator until you are ready to use it. Combine the flour, salt and sugar in the food processor bowl with the blade and place in the refrigerator for 20 minutes. Combine the cold water and vodka or vinegar and keep chilled.

Pulse the dry ingredients a few times to blend. Add the chilled butter and pulse until the mixture resembles coarse meal, then add the frozen butter and pulse until the butter is in pea-sized pieces. Add ¼ cup of the vodka mixture and pulse briefly. The dough should be soft and crumbly, yet kneadable. If the dough easily holds together when you squeeze a small amount, it is ready. If not, add more of the vodka mixture a half-tablespoon at a time until the dough holds together. It should still look like a bowl of crumbs.

Turn out the dough on a floured surface and gather into a ball, kneading it as little as possible. Divide the ball into two parts, one a little bigger than the other, and form into disks. Wrap the disks individually in plastic wrap and refrigerate at least 20 minutes or overnight. Resting relaxes the gluten, making the dough easier to handle.

Remove the disks from the refrigerator 30 to 40 minutes before you are ready to make your pie. The dough is ready to roll when you can press the heel of your palm halfway through the dough. On a floured surface, flatten the larger disk with a floured rolling pin until it is half as thick as when you started.

Roll out the disk to a 14-inch circle, flouring the surface and rolling pin as needed. Roll from the center out and rotate the dough to ensure it is evenly thin. Place the dough in a 9-inch deep-dish pie pan and tap the pan on the counter several times so that the dough settles in.

Prepare the filling: Place the berries, lemon zest, lemon juice, sugar and flour in a bowl and gently stir to combine. Pour into the pie pan and dot with the butter cubes.

Roll the second, smaller disk of dough into a circle large enough to cover the pie with about 1 inch of overhang. Place it on top of the filling and fold the edge under all around to form a rim. Crimp the rim with a fork or your fingers to seal the top and bottom crusts.

Place the pie in a preheated 400-degree oven. If it’s a hot day, assemble your pie first and place it in the freezer or refrigerator while your oven preheats.

Brush the top crust with beaten egg, then sprinkle with coarse sugar. Bake, rotating every 10 to 15 minutes, until the pie is golden brown and bubbly, about 45 minutes. Wrap the rim in aluminum foil near the end of the baking time if it threatens to darken too much. Serve the pie warm or at room temperature.

Please donate now: The Napa Farmers Market needs your help in this challenging time. Our stall fees are down and expenses have climbed with the changes necessary to bring you a safe market every week. Our farmers rely on us—and on you—to stay in business. Please help us continue to provide this essential community service by making a tax-deductible donation now at www.napafarmersmarket.org/donate.

Watch it now: How to Organize Your Kitchen So Cooking is a Breeze

How to Organize Your Kitchen So Cooking is a Breeze

Marilyn O’Connell is the president of the Napa Farmers Market’s board of directors.

Napa Farmers Market new location: Until further notice, find the Napa Farmers Market at 1100 West St. (at Pearl Street), Napa, site of the former Cinedome Theater. Hours are Tuesdays and Saturdays, 8 a.m. to 9 a.m. for seniors only (65 and older); then 9 a. m. to noon. As a California Certified Farmer’s Market, the market is considered an essential food business and will remain open during the Napa County shelter-at-home mandate. Check napafarmersmarket.org for updates.

Recipe roundup: 5 easy recipes to get you through the week

The potatoes, onions and garlic that farmers planted in winter have been slowly developing underground and are now making their way to the Napa Farmers Market.

There are plenty of peaches at the St. Helena Farmers' Market and plenty of ways to enjoy them.

It's too hot to turn on the oven to make a dessert. Instead, head over to the St. Helena Farmers' Market to buy various fruits for a no bake dessert.

A look at the cherries and pears brought to the market by Arceo Ranch, owned by Annette and Robert Arceo.

Mixing, rolling and cutting empanada dough from scratch is worth trying if you're into playing with dough.

How to roast summer's bounty of vegetables ahead for meals later

Berries wait for buyers at the Napa Farmers Market.