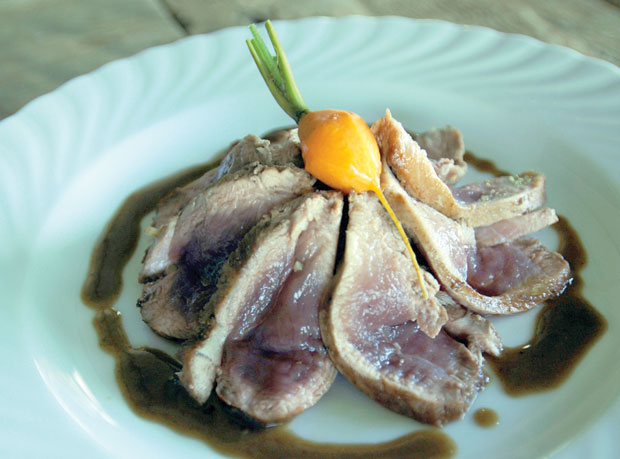 Cornu suggests a “a quick and easy recipe” recipe for duck to pair with Raymond’s flagship Generations cabernet. Submitted photo 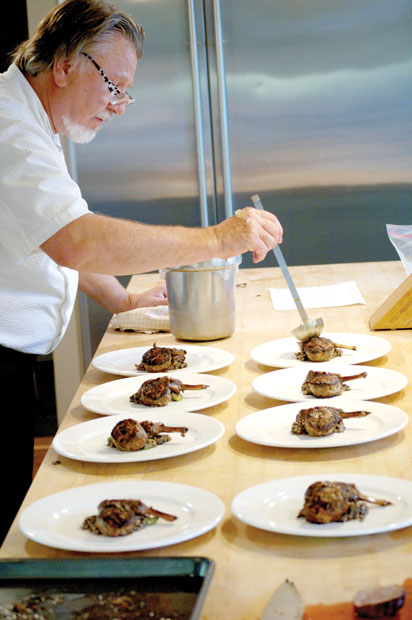 A native of France, Michel Cornu cooked his way to the Napa Valley, where he was chef at Auberge du Soleil and Far Niente. After retiring in 2003, he’s returned to cook at Raymond Vineyards in St. Helena. Submitted photo

Chef Michel Cornu’s workday begins by quietly strolling the one-and-a-half-acre, biodynamically farmed kitchen garden at Raymond Vineyards to decide which fruits, vegetables and herbs are the best candidates for that day’s culinary creations.

“I don’t like to plan too far ahead,” he said. “I like to see what jumps out at me — which herbs or vegetables are at their peak.”

Soon after, as Cornu sharpens his knives to begin paring and slicing in the kitchen, the gardening crew marches large baskets laden with home-grown fingerling potatoes, green beans, tomatoes and herbs into his kitchen.

Cornu is a longtime Napa Valley resident, but it was a long road here from his home in Saint-Cergues, France, near the Swiss border and Geneva.

You might say he was born into the business. From an early age, he helped his parents run their hotel and restaurant. He would get up at 6 to get breakfast ready for the hotel guests before he left for school, and help in the kitchen or dining room after.

Cornu places his official beginning as a cook at age 13. “In those days, it was quite common for a 13-year-old to work in addition to going to school,” he said. “But I didn’t really like school, so I decided to go to culinary school instead.

“Working and going to school was hard, but it teaches you to respect work and I learned about every aspect of running a hotel and restaurant. I liked the people contact in the dining room or the bar, and it was more lucrative than cooking, but it was never as interesting to me as the kitchen.”

When Cornu was 18, after completing his culinary training and apprenticeship, he left home for a 16-month tour of duty in the French Navy. By the time he returned, his skills and ideas had evolved to the point that he found that his parents’ way of running the business wasn’t his. Next thing you know, he found himself in New York with $500 in his pocket.

From there, he got a good, working tour of the United States. Looking for the ideal location to cook in the French style, he did stints in Georgia, Chicago and Dallas before he received an offer to be the chef at Auberge du Soleil in Rutherford.

One of his favorite stories goes back to his days at Auberge, where Gil Nickel, the owner of Far Niente Winery, was a good customer. Nickel repeatedly asked Cornu to cook for his parties. When Cornu insisted that he was too busy, Nickel countered with, “If I send my helicopter to Auberge to bring you over to Far Niente and then fly you back, will you do it?” The answer was, “Yes.” Shortly thereafter, Cornu became executive chef for Far Niente. Cornu spent 19 years at Far Niente until Nickel’s death in 2003.

After leaving Far Niente, Cornu tried retirement and found it rather boring, he recalled. He went home to take care of his father for a time and did some consulting.

When offered a position at Raymond Vineyards, the pull of the winery garden was too much to resist, and he joined the company in 2011. He and Raymond’s new owner, Jean-Charles Boisset, hit it off from the start, and Boisset, a fellow Frenchman, has given him carte blanche in the kitchen, a chef’s dream.

Cornu views his French training as only a base for the way he cooks now. He’s able to get half of his produce from the garden and the rest from a grower in Calistoga.

“I like to respect the season, source everything locally and keep it simple so the ingredients shine,” he said. “We also use the chickens and ducks on the ranch in the kitchen, and we have quail and Silkie chicken eggs right here, too.”

He remarked that he’d like to get all of his meat from the property, but “it’s too hard on the employees. They make friends with the animals.”

When it comes to pairing food and wine, he takes a pragmatic approach. “The food should complement the wine. One shouldn’t overpower the other. I avoid tricky foods like asparagus, strong herbs and hot or overly spicy dishes.”

He offered an example of a complementary combination, pairing the buttery nuttiness of scallops with a slightly buttery chardonnay with good acidity. “I taste as I cook and after awhile, you know, it just comes naturally,” he said. “It’s a fun challenge, trying to show the wine off to best advantage.”

In another pairing, he chose the 2008 Raymond Generations Cabernet to go with his recipe for his duck breast. Generations is Raymond’s top of the line and is named for the Raymond family’s five generations of winemaking in the Napa Valley. Cornu said the wine’s softness, roundness and balance make it a good match. “It’s good with the sweetness and gaminess of the duck,” he said. “Another cab might be too big. It needs to be a soft cab with good acidity.”

When asked about other dishes that would pair well with Generations, he suggested, “Ostrich has a sweetness that would go well. Pan-fired wild Atlantic salmon with a Generations sauce would be good.”

The duck recipe, however, he recommended for home chefs. “This is a quick and easy recipe. The Long Island duck is small and doesn’t need more than one and a half minutes a side.”

Warm a sauté pan. When very hot, add 2 ounces of olive oil and 1 ounce of butter. Sautée the mushrooms until golden brown, then add salt and pepper to taste.

Add the garlic, sautée again for 2 more minutes, add the parsley and chives, put aside and keep warm.

Sautée the seasoned duck breast for 90 seconds on each side in the same pan (2 minutes if you like them medium). Set aside.

Deglaze the pan with the Generations for 2 minutes and add the pink peppercorns. When reduced, add 1/3 of the porcini mushrooms then blend in a mixer, adding the remaining butter and olive oil.

Adjust the sauce with salt and pepper to taste.

Put a little sauce on the middle of the plate, add the rest of the porcinis, then slice the breast and arrange it as a sun.

'A Feast of Serendib': A culinary journey to Sri Lanka is a celebration of diversity

Mary Anne Mohanraj came to the U.S. from Sri Lanka as a child and as a college student made a collection of recipes for her mother. Ten years later, she has turned them into a cookbook, "A Feast of Serendib" that celebrates the cuisine and traditions of her homeland island.

We had dinner at the newly opened Olive & Hay at the Meritage Resort in Napa in early March of this year.

Cooking for Comfort: Plenty of ways to enjoy great potatoes

You’ve probably baked a potato before, but there are plenty of other ways to enjoy great potato-ness.

These assorted popsicles are just as refreshing as something you would get at an ice cream stand.

Don't know what to do with all that fresh produce? Make a chilled summertime soup

Chicken wings test positive for virus in China, but no proof of transmission, experts say

Frozen chicken wings imported from Brazil have tested positive for the novel coronavirus in the southern Chinese city of Shenzhen, authorities said.

Dr Pepper took to Twitter to let its fans know the company is aware the soda is sometimes hard to find in stores these days.

Chef Sandy Sauter really misses doing demonstrations at the Napa Farmers Market so she decided to share, in writing, some of her favorite tips.

Cornu suggests a “a quick and easy recipe” recipe for duck to pair with Raymond’s flagship Generations cabernet. Submitted photo

A native of France, Michel Cornu cooked his way to the Napa Valley, where he was chef at Auberge du Soleil and Far Niente. After retiring in 2003, he’s returned to cook at Raymond Vineyards in St. Helena. Submitted photo