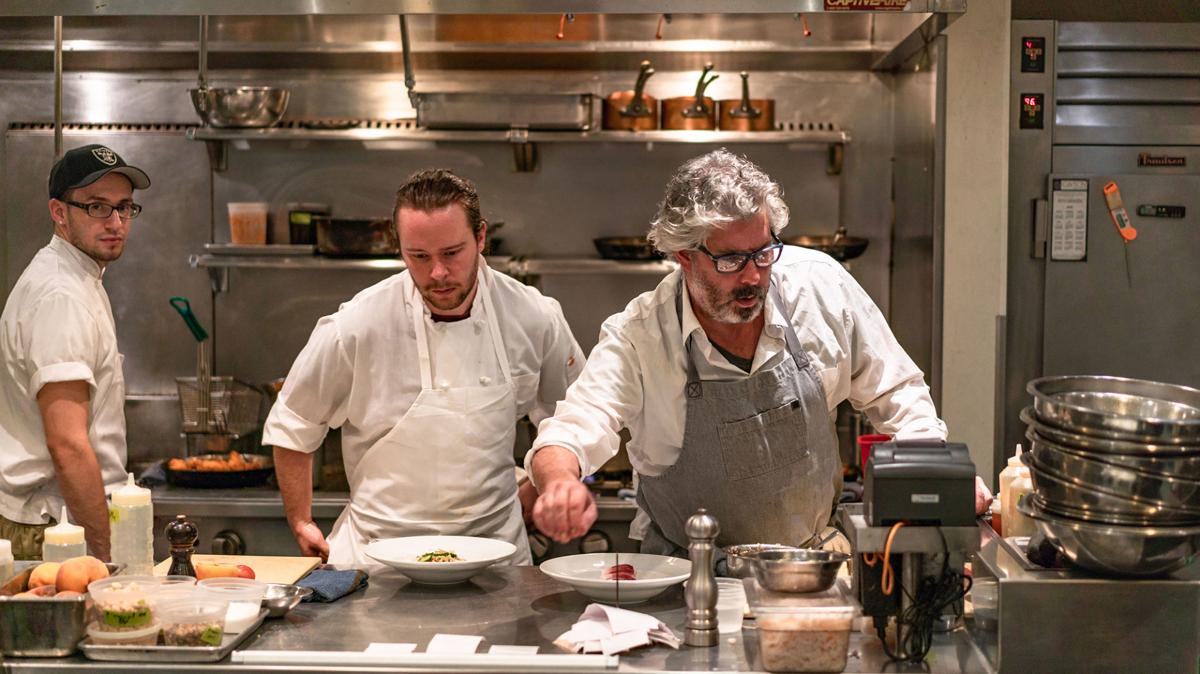 Richard Reddington, right, in the kitchen at Redd restaurant, which closed in Yountville on Sunday. 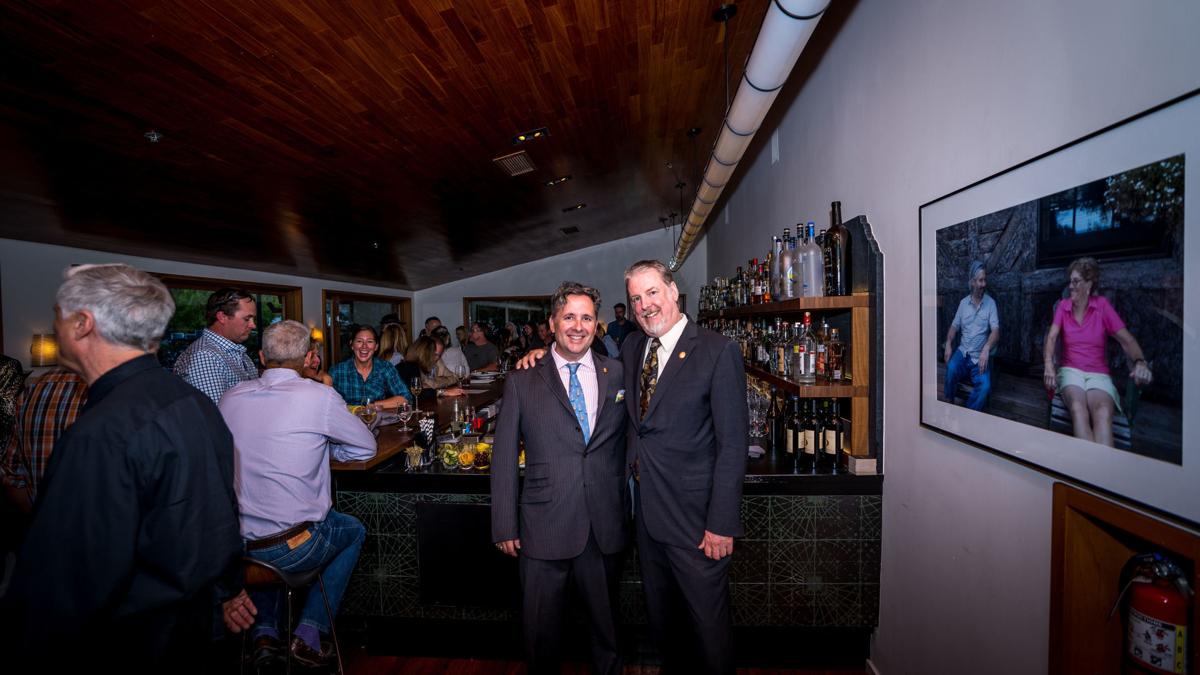 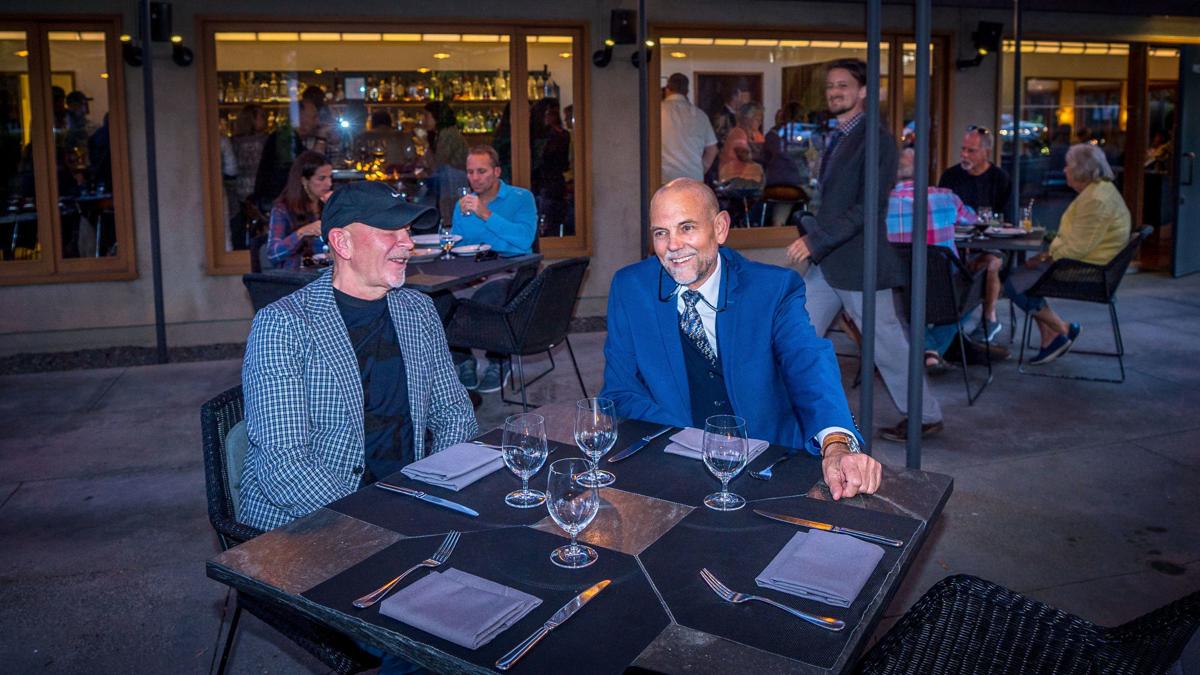 Since the day it opened in 2005, Redd’s general manager has been Guy Rebentisch (right), an industry veteran with more than 45 years’ experience. Here he sits its with vintner Cliff Lede who has been frequenting the restaurant once or twice a week since its opening. 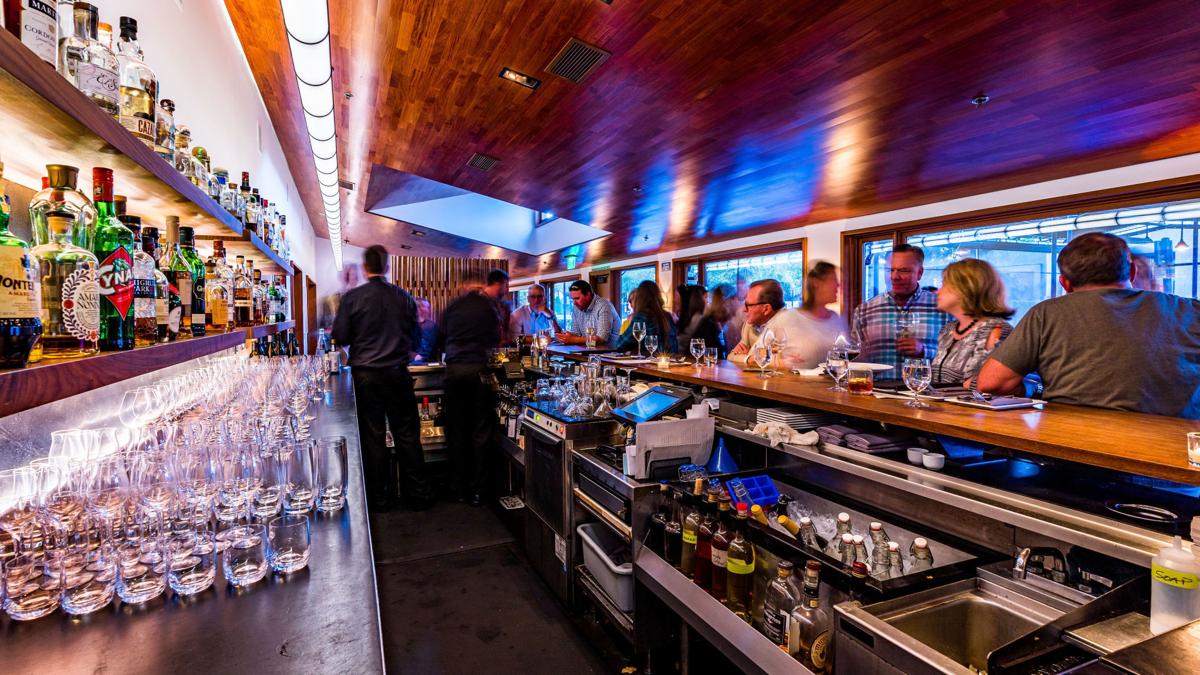 Former Redd employees and guests gathered to celebrate and commiserate on one of the final days the restaurant was open.

“We had been talking about it for about a week, but it became a reality pretty fast,” said Redd’s general manager, Guy Rebentisch, who has been with the establishment since its beginning.

Owned by Chef Richard Reddington and his business partners, the fine-dining establishment opened in 2005 and quickly became a favorite for diners seeking an alternative to the more expensive and time-intensive experience at The French Laundry a few blocks away.

Rebentisch cited growing staffing challenges, the lingering impact of the 2017 fires, changes to consumer preferences, unspecified health issues and Reddington’s desire to spend more time with his family as part of the decision to end so quickly.

“Everyone is dealing with staffing issues — it’s unsustainable,” Reddington wrote in a text while traveling. “Developers keep building, but they don’t work on the ground floor.”

When asked if “work on the ground floor” meant that the developers don’t live in the valley or if it was that they don’t provide or build housing for workers Reddington responded: “Yes.”

Many local independent restaurant operators see the increasing number of hotels and resorts not as a potential for bringing more patrons to their restaurants but instead as a threat to their very existence by diluting their customer base and exacerbating the staffing crisis.

“Staffing has become the greatest challenge to every restaurant in the Napa Valley,” Rebentisch said. “First it’s too expensive to live here for many — two of my staff drive in from Sacramento four or five times a week. Beyond that, there’s a bidding war for talent right now with all these new places opening up.”

With many eateries running on skeleton crews already, the ferocity of Napa Valley chefs and restaurant owners who are voicing their dismay is on the increase. Many well-regarded Napa Valley restaurants have closed in 2018 — Terra, Cindy’s Backstreet Kitchen, Brannans, Hurley’s, Redd — and each has stated the lack of qualified workers as one of the reasons (if not the reason) for their shuttering or sale.

Beyond the challenges of getting and keeping staff, Rebentisch points to changes in tourist preferences.

“In general, many of the people visiting the valley seem less interested in fine dining than they once were,” he said. “More and more are wanting fast casual options and going to wine-tastings with food at a few different wineries instead of just one restaurant.”

The 2017 fires are still having an impact.

“Business hasn’t really ever come back as much as we’d hope since the fires,” Rebentisch said. “However, to what extent the fires actually had on the final decision to close Redd, I can’t say.”

The loss of Redd is a sting to the Napa Valley. Reddington is a master chef who created some of the finest food in the valley, having trained and worked at some of the most iconic California restaurants — Auberge du Soleil, Jardiniere, Masa’s and Spago in Los Angeles, to name a few. But Reddington and Redd were more than that — it was also an establishment dedicated to supporting the next generation of aspiring chefs and wine professionals.

“The valley has lost an icon of innovative and satisfying food but also a social mecca where both the top and the up-and-coming local and international wine industry people would hang out and interact,” said Chris Blanchard, a master sommelier who worked as Redd’s first wine director from 2005 to 2008. “It was truly the most successful opening I’ve ever been a part of and the most exciting restaurant I’ve ever worked with. It reminded me of Stars in San Francisco back in the ‘80s.”

Blanchard points to the wineries as having a role in the challenges restaurants are now facing.

“Redd’s closing says a lot about the changing dynamics of dining in the valley,” he said. “Restaurants have to compete with so many wineries that are now offering food pairings and lunches, with in-house chefs creating menus to keep their visitors engaged. Tourists aren’t necessarily interested in a big dinner or fancy lunch when they can have a food experience at the winery. It’s really tough on restaurants now.”

Redd may have closed, but Reddington is not done with the Napa Valley just yet.

“Exploring other options in the area and also here (New York) — but still keeping the house in Yountville and Redd Wood” he wrote. His second restaurant, Redd Wood, also in Yountville, serves more casual meals, including pizza.

When asked what Rebentisch plans for his next adventure, he shook his head.

“I’m not exactly sure, but I’ve been doing this for 45 years, and so I am considering retirement,” he said. “But, then again, I can’t really see myself sitting around — not after a lifetime in this business.”

Editorial: Vote yes on Measures E and I

Voting for Measures E and I is a crucial first step toward addressing the county’s affordable housing needs. But don’t expect it to be a cure-all.

The storyteller: Light as a feather

“Ouch,” I said as drops of blood dripped from my fingertip into a tiny thimble.

Why are supervisors allowing restaurants in the Ag Preserve?

A letter to the editor in  the Oct. 31 paper “Allowing restaurants in the Ag Preserve?” cites the closure of Redd to argue that wine-food pai…

Richard Reddington, right, in the kitchen at Redd restaurant, which closed in Yountville on Sunday.

Since the day it opened in 2005, Redd’s general manager has been Guy Rebentisch (right), an industry veteran with more than 45 years’ experience. Here he sits its with vintner Cliff Lede who has been frequenting the restaurant once or twice a week since its opening.

Former Redd employees and guests gathered to celebrate and commiserate on one of the final days the restaurant was open.