Taste of the sea: An oyster flavor guide
Share this

Chad “Tex” Metcalf, the sales and logistics manager for Cherrystone Aqua-Farms, is affectionately called an oyster sales “shaman and guru” by his colleagues because of his detailed knowledge of the oyster industry. He says he works with fishmongers, restaurants, grocery stores and other retailers to determine the best oyster for their customers.

“There are four factors that help me recommend a particular oyster: appearance, regionality, flavor and ‘shuckability,’” says Metcalf. “Some prefer bayside oysters, others the seaside oysters. Some are more focused on price and availability, while others on appearance and size. Shell integrity, which we refer to as ‘shuckability,’ is important as well. Oysters that tend to grow fast will have thinner shells compared to wild oysters. Factors such a weather and food availability contribute to an oyster’s growth spurts and shell thickness. “Thinner shells do require more finesse compared to an oyster that comes from a slower growing region,” says Metcalf.

Shucking — the act of prying open an oyster’s shell and freeing the muscle that keeps the oyster attached to the shell — is an art only perfected with plenty of practice. Expert shuckers can open a dozen oysters in roughly a minute, but for most, it is an arduous task that takes time. Having oysters that are easy to shuck means lower labor costs for wholesalers and restaurants looking to quickly serve oysters for hungry seafood enthusiasts.

The cultivated oysters sold by Cherrystone are raised to have harder shells that make for faster shucking.

The husbandry practices of Cherrystone and other cultivated oyster farms also help to give a desired shape to oysters. The oysters are regularly checked to ensure they are growing with deep, rounded “cups” in their shell that encourage the flesh to mature as plump, sweet and tender tastes of the sea. Metcalf says that shape leads to attractive oysters that look “pretty” when served on the half shell when raw, grilled or in a preparation like oysters Rockefeller.

“Of course you have to have something that is aesthetically presentable. We have a lot of success with our oysters, from ‘buck-a-shuck’ sort of places to white tablecloth restaurants,” Metcalf says.

Flavor of the earth

Appearance and shucking ease outweigh the taste of the oyster, which is highly subjective, Metcalf says. Flavor is something that oyster farms have little control over, as the conditions of the natural sea water will impact the oyster more than any husbandry practice will. Oysters can filter as much as 50 gallons of water a day and the oyster will build its flavor profile based on water temperature, salinity and food sources available.

When it comes to choosing an oyster for home consumption, Metcalf suggests purchasing a variety of oysters from different locations to truly experience how habitats impact the flavor of the oyster.

What to look for in a good oyster

Oysters should be kept cold, but not submerged in ice or an ice-water slurry. When searching for an oyster, make sure they are nestled on top of ice or at least in refrigerated storage without sitting in water. Oysters should be closed tightly, and “too much cold or moisture can make them open up,” says Greg Coates, the hatchery manager at Cherrystone Aqua-Farms. He suggests asking your fishmonger when the oysters came into their store and to avoid oysters that have been sitting for more than a week. To confirm the origins of the oyster, ask your fishmonger for the shellfish tag that would have come with the container of oysters when shipped to the store.

Cherrystone Aqua-Farms, a Virginia pearl on the Eastern Shore

Oysters that come shucked should have a viscous, shiny liquid surrounding the flesh known as “liquor.” The presence of liquor lets you know that the oyster is freshly shucked. If the oyster looks dry or without any liquor, it’s been opened and shucked for a while, and you should avoid eating it. The next thing to consider is the shape of the oyster. “I like an oyster that has a nice shape,” Coates says, “and wild oysters will tend to be long and skinny with a shallow cup. Either is fine for home consumption. The determination depends on your preference.”

There are some identifying phrases and terms that relay the flavors of an oyster before you even taste it. Some oysters come from estuaries, locations where freshwater rivers and inlets meet saltwater bays or the ocean. These oysters will have a milder taste due to the lower salinity in the water compared to sea-harvested oysters, which will have a more prevalent salt flavor.

East Coast oysters are known for their sharp, salty flavors, while West Coast oysters tend to have notes of cucumber and vegetation. Kumamotos, a variety of oyster that originated in Japan but is cultivated in various locales along the Pacific Ocean, taste sweet with a melon finish. Belon oysters, also known as European Flats, are flavored heavily by seaweed with notes of minerality. Gulf Coast oysters tend to be creamy and mild. Native oyster varieties are present in all oyster growing regions (like Olympias in the Puget Sound) and will vary with intense flavors.

When selecting oysters, stick to four to six varieties at a time, opting for at least two of each variety. This will help prevent your palate from becoming overwhelmed and losing the flavors of the oysters.

Shucking an oyster with ease comes with practice, but you can get the hang of it with your first dozen oysters. Wild oysters will generally have a thicker shell and can withstand an aggressive approach. Farm-raised shells may be thinner and delicate which can chip more easily, leaving hard, unpleasant deposits in the oyster.

Nestle the oyster with the deep cup-side of the shell face-down in a kitchen towel, holding it in your non-dominant hand. Start at the hinge of the oyster, where the shell is usually thicker. With a proper shucking knife, first use the tip, and then the broad side of the knife, to break the hinge until it pops open. If it seems too difficult to manage starting at the hinge, you can move slightly to the side of the hinge, then move towards the hinge to pry it open.

Carefully run the knife between the top and bottom shells to separate and dislodge the top shell, making sure to scrape the oyster muscle off the top half of the shell. Discard or recycle the top shell. (States and conservation groups up and down the East Coast ask residents to recycle oyster shells which are used to restore and protect the reefs.) Loosen the adductor muscle which keeps the flesh secured to the shell. Some shuckers turn the flesh upside down to present the round, plump side of an oyster. Be sure to maintain as much oyster liquor in the shell as possible.

How to serve fresh oysters

Hardcore oyster aficionados will insist they be served as soon as possible after harvest, completely naked. A squeeze of fresh lemon or quick dash of hot sauce are common pairings, as well as traditional sauces, such as mignonette, cocktail sauce and rémoulade, which complement the oyster’s intrinsic sweet or acidic characteristics. The only way to know what you prefer is to play around and taste everything.

Oysters need a surface that inhibits the slippery shells from sliding off the plate. It is best to serve them on a platter of crushed ice, but they can also be stabilized on a bed of rock salt, seaweed or lettuce leaves. Remember to serve oysters with a bowl for empty shells.

While there are only five species of oysters cultivated in the U.S., there are dozens of varieties, many branded by local seafood companies. They have subtle flavor characteristics resulting from the waters and growing conditions that make each unique. Here is a sample of oysters more commonly found in North America. Sample a variety to experience the salty, briny goodness the ocean has to offer.

Watch House Point — These medium-sized oysters are a brand of Cherrystone Aqua-Farms. They are grown at Watch House Point on the Eastern Shore, near the sea, and have delicious saltiness with a crisp melon finish.

Misty Point — Misty Points are popular on raw bar menus along the Eastern Seaboard. They are known for being exceptionally plump with a sharp briny flavor as soon as they hit your tongue. Misty Points are grown only by Cherrystone Aqua-Farms.

Chunu — Chunus pack a highly salty punch in a small package. Diminutive in size and popular on cocktail menus, Chunus are a smaller version of Misty Points produced by Cherrystone Aqua-Farms.

Fanny Bay — These oysters from the waters of British Columbia are firm, mild and great for cooking.

Totten — Deeply cupped and the size of walnuts, these Northwest oysters are brightly flavored with a smooth, vegetal finish.

Glacier Point — These oysters are harvested off the Alaskan shore, offering a high salinity with a thick shell that make them stand out from other West Coast oysters.

Belon — Originating in Brittany, France, but cultivated in the U.S. as well, these oysters have a bright minerality and soft texture.

Blue Point — Legendary along the Long Island, New York, coastline, Blue Points are juicy with a clean finish and hail from the Great South Bay.

Pemaquid — The cold water of Maine’s Damariscotta River produces a bracing, assertive and salty oyster that is more plentiful in late spring and through fall.

Wellfleet — Wellfleets, from Cape Cod, Massachusetts’s shore, are classics often found at raw bars around the country. They are balanced, sweet and crisp with a salty tang on the finish.

Pelican Reef — These rich and creamy oysters highlight the warm water conditions around the Florida Keys.

Pepper Grove — The distinctive shell is nearly as striking as the mildly sweet and briny flavor of these wild Gulf Coast oysters from outside of Galveston, Texas. Try them with a dash of Tabasco sauce which is produced about four hours east from where the oysters are harvested.

Sign up for our weekly updates and explore our in-depth coverage, from field to plate.

Issue no. 8: Oyster farming in Virginia

Feast and Field learns about Cherrystone Aqua-Farms’ innovative shellfish production, how you can make sustainable seafood choices, and an oyster flavor guide. 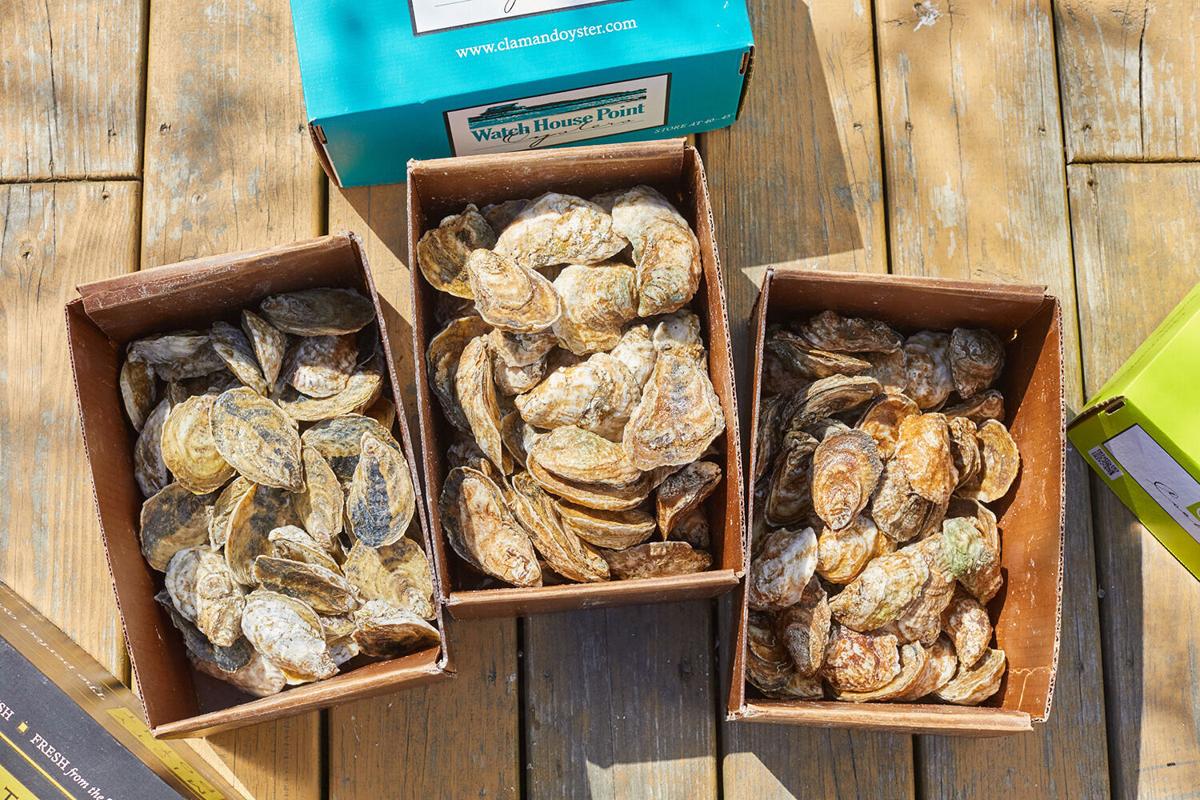 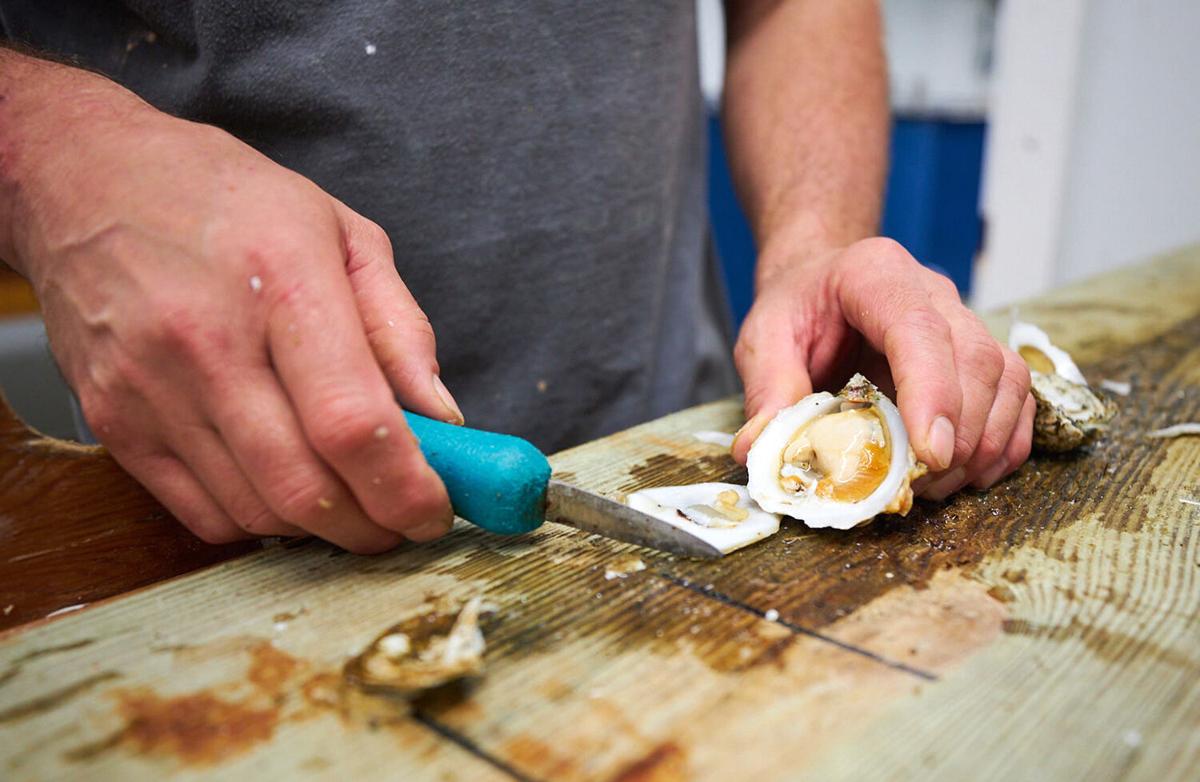 Oyster shucking takes practice for most, but an expert can shuck a dozen in one minute. 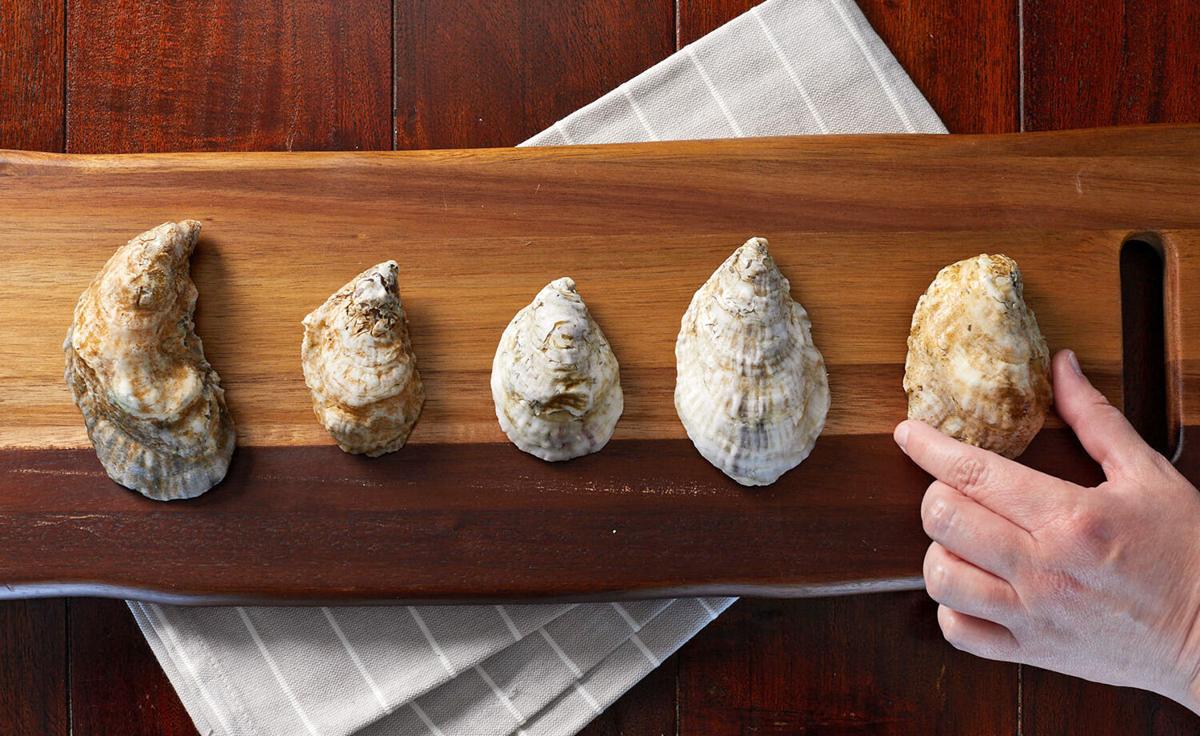 Cultivated oysters tend to have larger, rounded shells compared to wild oysters which are often long and skinny with a shallow cup. 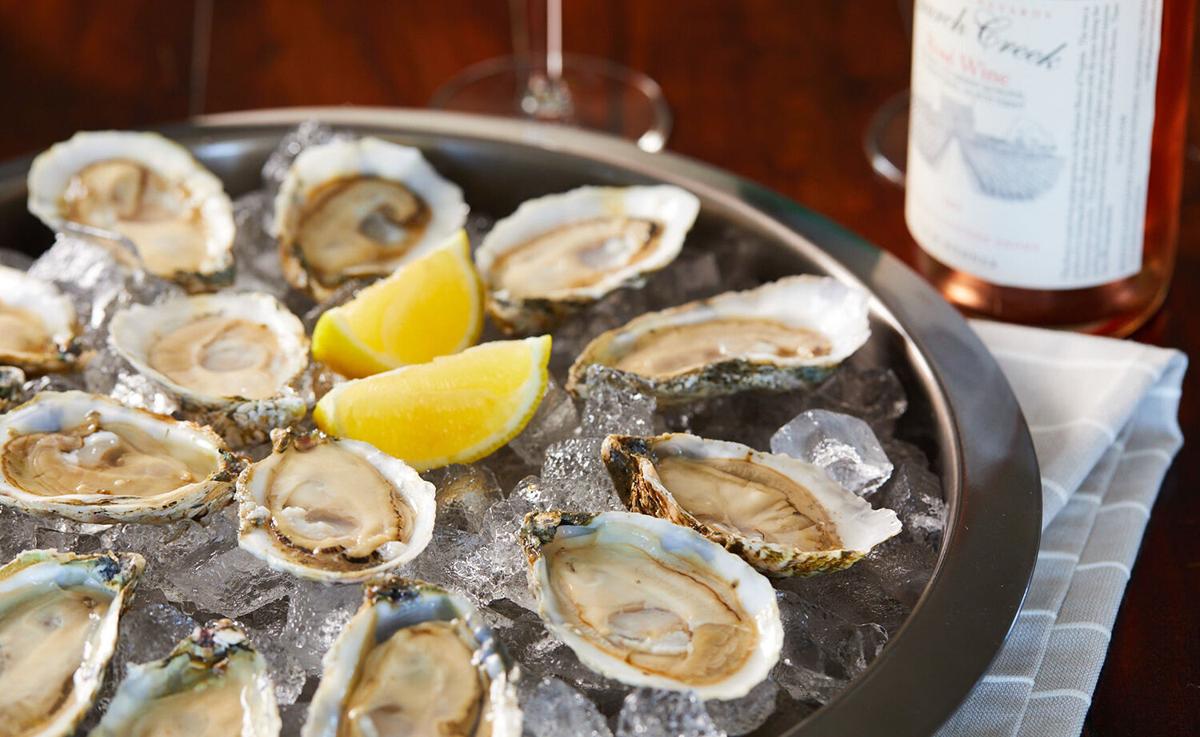 Freshly shucked oysters are best served chilled on a bed of ice.