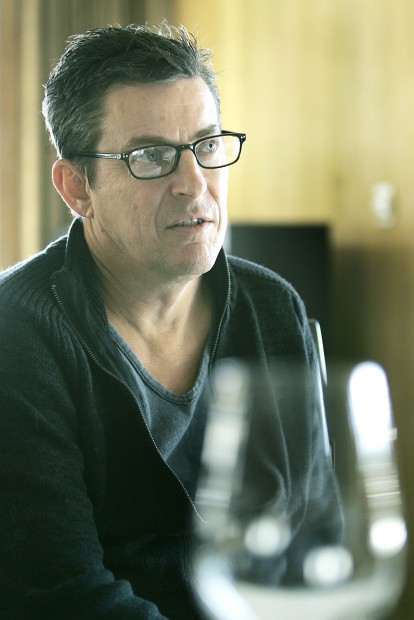 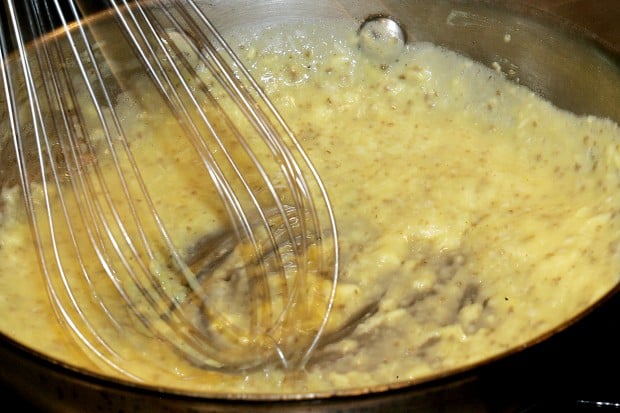 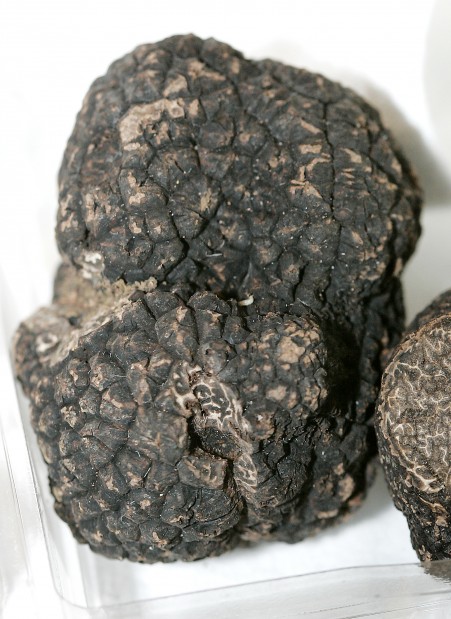 FRIDAY - JANUARY 06, 2012 - NAPA, CA - A truffle from the Umbrian region of Italy that chef Ken Frank of La Toque will use in dishes he prepares for the Second Annual Truffle Festival at the Westin Verasa. J.L. Sousa/Register 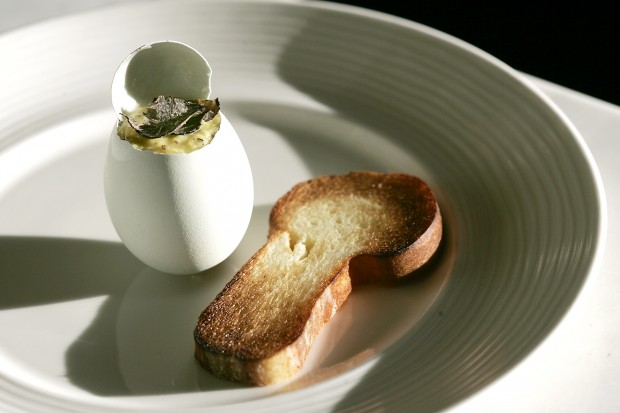 FRIDAY - JANUARY 06, 2012 - NAPA, CA - Truffled egg back in its shell by chef Ken Frank of La Toque in advance of the Second Annual Truffle Festival at the Westin Verasa. J.L. Sousa/Register

Many of us find it hard to swallow that one of the rarest and most expensive foods in the world is rooted from underground hideouts by pigs and dogs.

Yet that’s exactly how the prized truffle is harvested, notes Napa chef Ken Frank, the valley’s resident expert on this high-priced fungus.

Executive chef/owner of Napa’s La Toque, Frank is getting ready to roll out his 30th annual all-black-truffle menu next week. “I doubt any other restaurant in North America can match that,” he said of his three-decade-long record of seasonal truffle menus.

Not only is Frank gearing up for La Toque’s truffle season, he’s also ankle deep in Tuber melanosporum as he pulls together plans for this coming weekend’s second annual Napa Truffle Festival.

Headquartered at Napa’s Westin Verasa Hotel, the truffle festival will take place at venues throughout the valley with events ranging from truffle seminars to a grand dinner featuring truffles for every course, prepared by acclaimed chefs from Italy and the United States.

On the festival’s final day next Monday, a truffle marketplace is scheduled between 10 a.m. and 2 p.m. at the Oxbow Public Market. In addition to offering truffles and wild mushrooms for purchase, the marketplace will provide foodies an opportunity to taste area wines with truffle dishes. For example, Frank noted, C Casa will be preparing truffled egg tacos, Ca’Momi will have truffle pizza, Hog Island Oyster Company will feature grilled cheese sandwiches with truffles and Le Crepe will prepare truffle crepes.

In addition, noted Napa Valley forager and cookbook author Connie Green will be on hand autographing copies of the book she co-authored with chef Sarah Scott, “The Wild Table.”

While both are the fruity body of the actual organism, mushrooms grow above ground, truffles below, Frank pointed out in response to questions about his love of culinary funghi.

He noted that both are the spore-bearing fruit of the mycelium — a network of tiny white fibers — that grow underground. “Wild mushrooms are the single largest growing organism on earth,” he added. “Some mycelium can be as large as a football field.”

“The black truffle season is just ramping up,” Frank continued. “We got our first black truffles just prior to Christmas.” The shipment that  arrived last Friday came from Italy’s east central Umbria, not far from the ancient town of Spello, where one of the upcoming festival’s chefs has a popular restaurant.

“Most black truffles these days are cultivated,” the Napa chef advised. “(Modern-day) science has figured out the conditions needed for truffles to thrive ... and we are able to enhance those growing conditions.”

Optimum truffle-growing sites, Frank added, are those that have been inoculated with truffle spores and planted with hazelnut trees.

Locally, there is a site on part of a former vineyard in Carneros owned by Robert Sinskey Vineyards. There are other sites in Northern California, Oregon and North Carolina. “None of the American sites have mature sustainable production yet, but a couple are getting close,” Frank said.

In addition to Italy and France, the black truffle is successfully cultivated in Spain, Croatia and Australia, he added.

Excellent vehicles for the infusion of truffle flavor are eggs, butter and mild, soft cheese, according to chef Frank. For example, he suggests placing eggs in a glass container with a truffle, screwing on the lid tightly and refrigerating the jar for 48 to 72 hours.

“The key to maximum flavor extraction is surface area. Truffles should be sliced as thinly as possible, just as needed. A truffle shaver is ideal for this task. A microplane is a good tool, too, but the thickness is not adjustable. If chopping truffles, slice them first and then chop them very fine.”

Truffles should be cleaned under cold running water with a soft brush, patted dry and kept individually wrapped in a clean paper towel, Frank advised. “Keep them in a closed container in the refrigerator, but not the coldest part,” he continued. “After about a week, fresh truffle perfume begins to fade. Freshness is key, and they should be used quickly.”

Frank said scraps can be blended with butter in the food processor. Placed in the freezer, truffle butter keeps a long time and makes for tasty toast and popcorn.

When it comes to serving shaved truffles on pasta or risotto, Frank feels the appropriate portion per plate is about 5 grams, “a good one-fifth of an ounce. At $800 a pound, or $50 per ounce, that costs out to $10 per portion.”

Chef Frank is sharing with Register readers a dish he often serves diners at La Toque, Truffled Egg  Back in its Shell. A relatively easy recipe, it does call for use of a truffle shaver and a glue gun. The glue gun is used in the presentation of the dish. Chef Frank puts a drop of hot glue in the center of each serving plate and immediately fixes an empty egg shell on top. The shell is then filled with scrambled egg, topped with a truffle slice and accompanied by toasted brioche. Cleanup is easy, the chef says. Take a knife to the jot of glue and pop it and the shell off the plate.

Truffled Egg Back in its Shell

4 good pinches of salt, to taste

Get fresh whole eggs from a good supplier and place them, along with a fresh black truffle, in a jar you can tightly seal. Refrigerate jar for 48 hours to allow maximum flavor to infuse into the eggs.

Carefully cut the top of each egg with a topping tool and pour yolks and whites into a small mixing bowl. It helps to nestle the eggs in a cardboard egg tray to keep them from breaking when using the tool. Wash and dry the topped egg shells and attach, standing up in the center of a plate, with a drop of hot glue. The glue will not stick unless the shell is perfectly dry.

Cut 4 thin slices of truffle for garnish with a truffle shaver, finely chop the rest of the fresh truffle.

Melt the 6 tablespoons of butter over medium heat — do not allow to brown. Lightly whisk the eggs and add them to the pan, add the finely chopped truffle and 4 good pinches of salt. Cook, whisking gently but without stopping, and slowly cook the eggs. When they thicken up, halfway between Hollandaise and scrambled, pull the pan off the heat, verify seasoning and immediately spoon back into the shells standing on the plates. Top each with a slice of truffle and serve with toasted brioche.

The second annual Napa Truffle Festival is scheduled to take place at venues throughout the valley this coming weekend, Jan. 13-16.

FRIDAY - JANUARY 06, 2012 - NAPA, CA - A truffle from the Umbrian region of Italy that chef Ken Frank of La Toque will use in dishes he prepares for the Second Annual Truffle Festival at the Westin Verasa. J.L. Sousa/Register

FRIDAY - JANUARY 06, 2012 - NAPA, CA - Truffled egg back in its shell by chef Ken Frank of La Toque in advance of the Second Annual Truffle Festival at the Westin Verasa. J.L. Sousa/Register