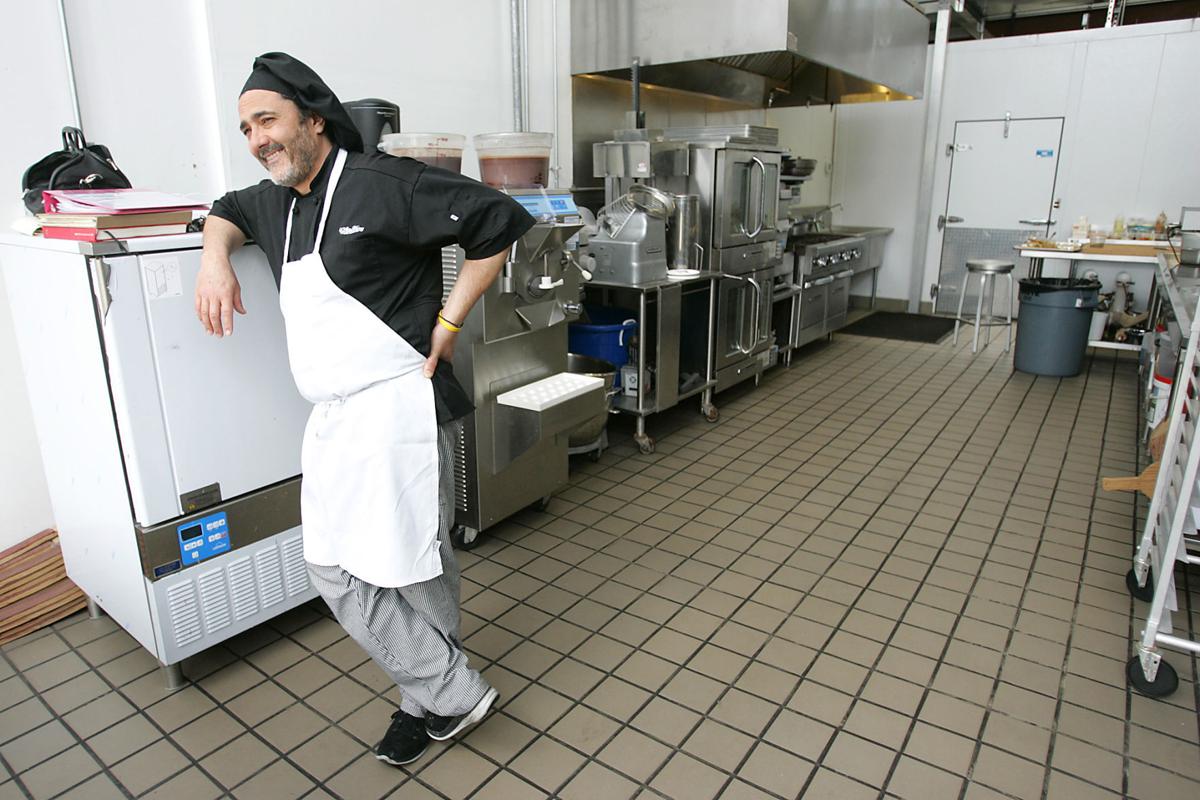 Chef Stefano Masanti pauses in the prep kitchen for V. Sattui Winery in St. Helena as he prepares for a menu tasting. 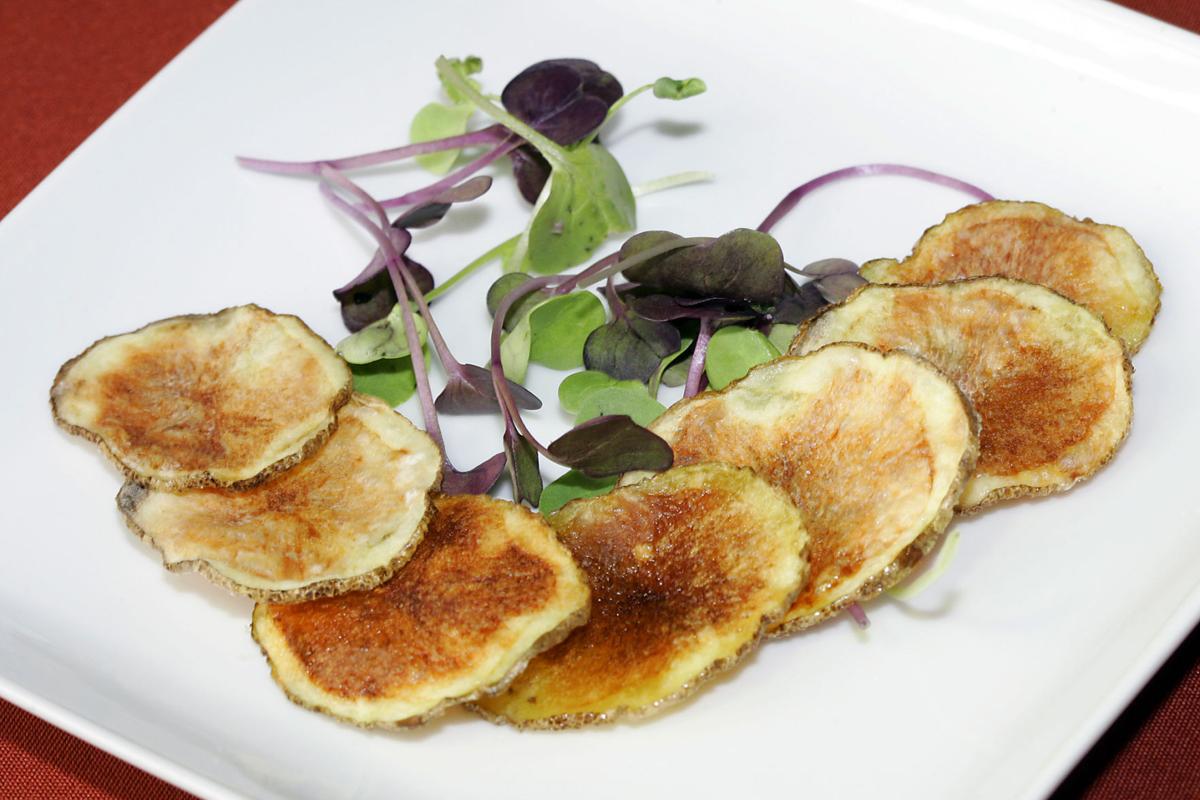 Fried, but not fried, potatoes by chef Stefano Masanti. 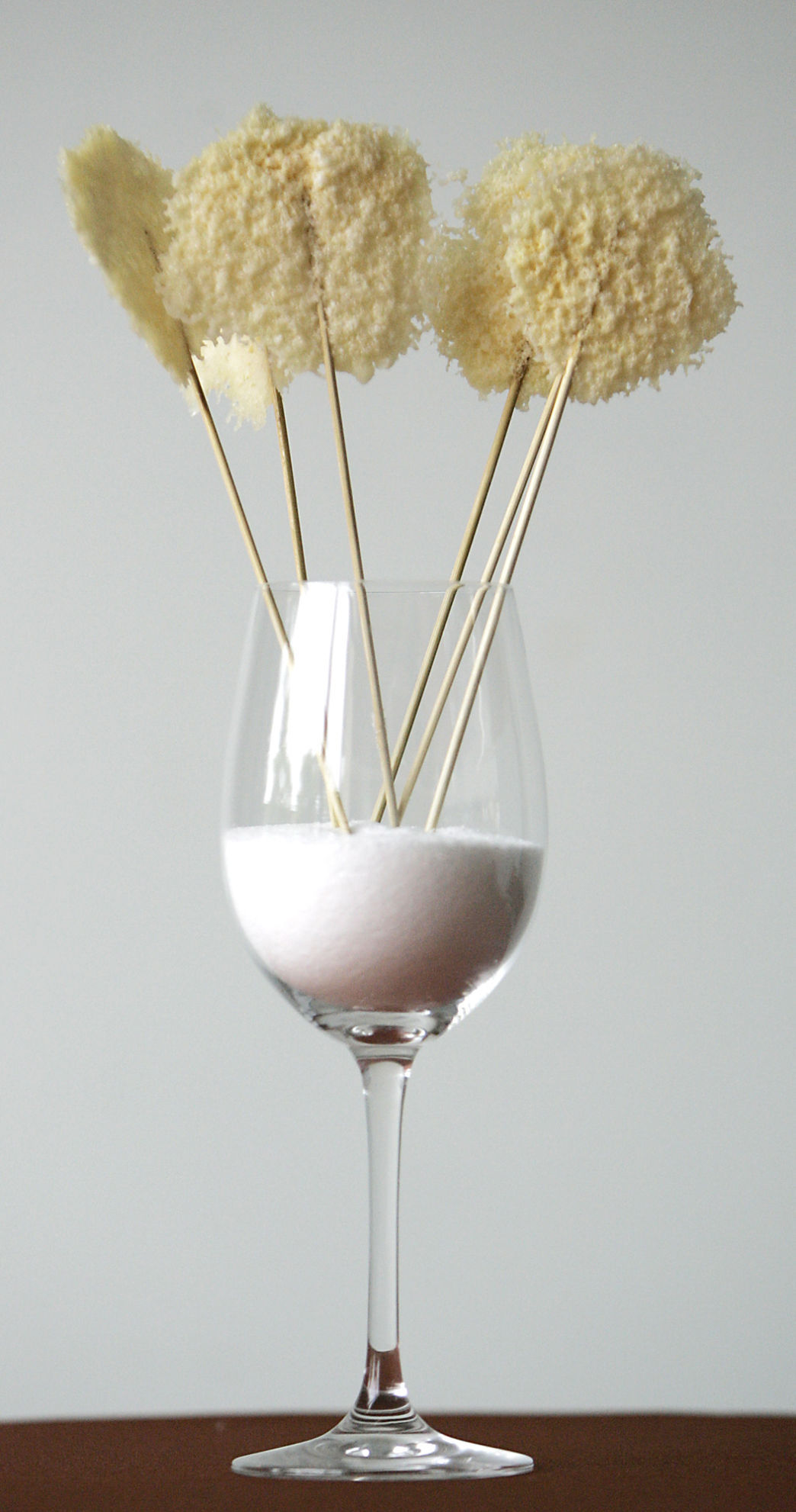 Parmesan lollipops as prepared by chef Stefano Masanti for a menu tasting. 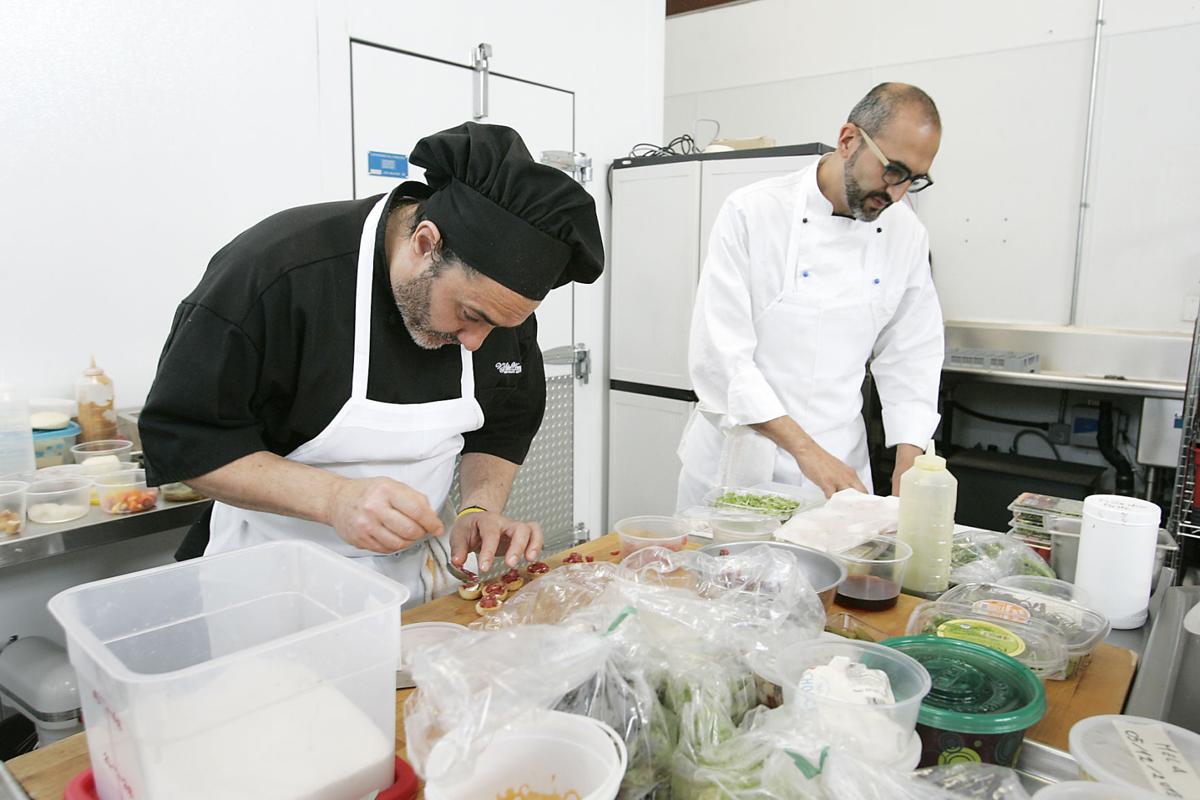 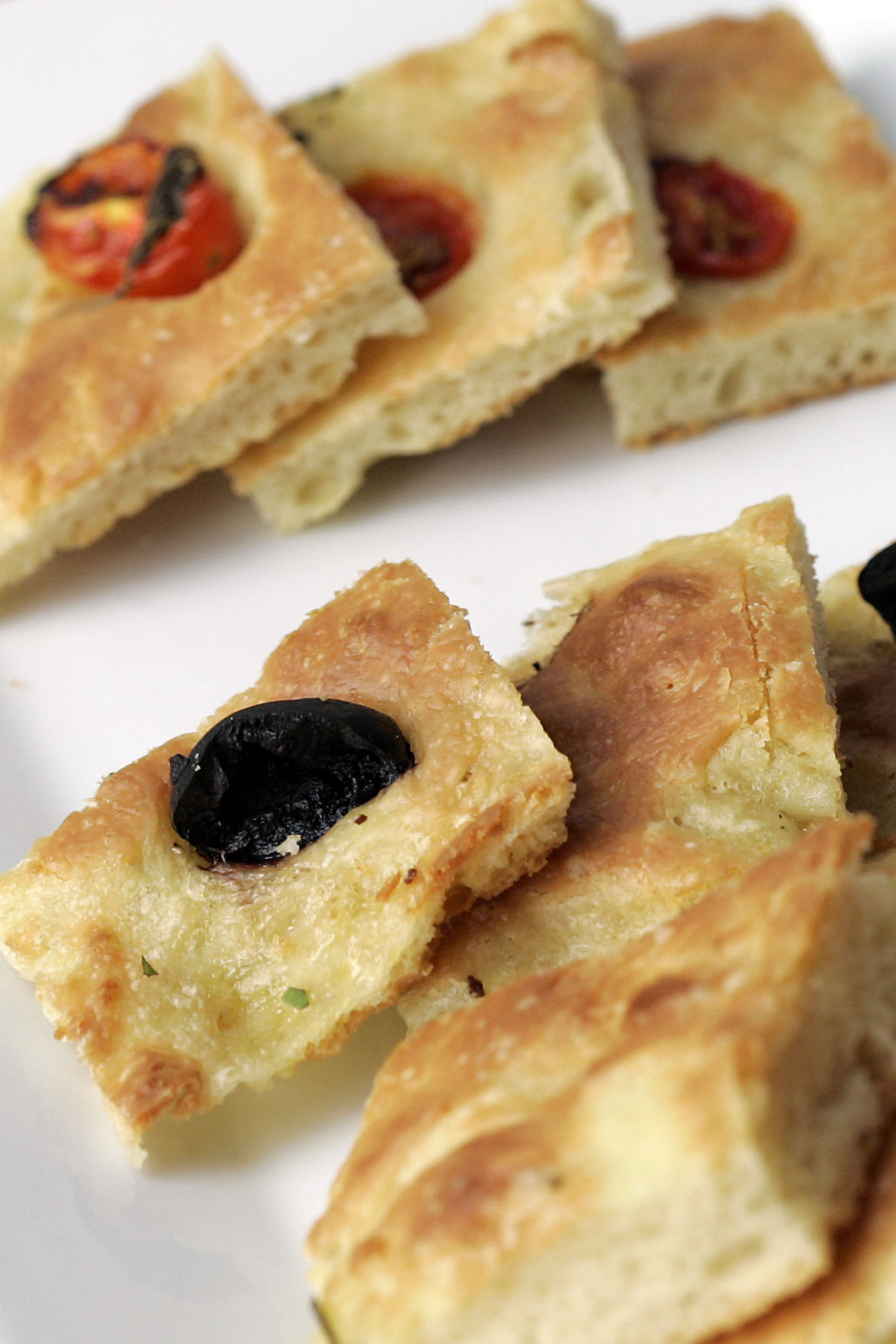 Stefano Masanti insists he is on vacation.

He and his assistant, Nico Annacondia, were in the V. Sattui kitchens; the Italian chefs were preparing a sample of hors d’oeuvres for a bride, planning her menu for her wedding which will take place at the St. Helena winery, later in the year. They were also making gelato, vanilla and pistachio.

“This is great,” said Masanti, the chef and owner of Il Cantone, a Michelin-star rated restaurant in the Italian Alps, named one of the top 60 in Italy and in the top 10 in Lombardia by the Italian food magazine Gambero Rosso. “I work from maybe seven in the morning to seven each night,” said Masanti, who is staying on the grounds of the winery with his wife, Rafella, a sommelier. “My wife and I can go to restaurants for dinner. For me, I feel I am on holiday.”

Il Cantone is open only during the ski season (and already booked through 2016) so Masanti is in the Napa Valley for the summer, taking charge of V. Sattui’s weddings and special events. Masanti, who in addition to being named Italian chef of the year at the 2014 Merano Wine Festival and “craftsman of the year” in Italy by the 2009 Identità Golose for best Valchiavenna bresaola) is also overseeing Sattui’s in house “salumeria” that is part the winery’s extensive deli.

But these accolades are not what the genial chef was interested in talking about; while whipping up Parmesan lollipops, house-made breadsticks wrapped with his proscuitto, and foccacia prepared three ways — just three of the some 50 hors d’oeuvres the bride can chose from — he wanted to know what we thought of his gelato. We, the hard-working press, had to each sample at least two bowls full to confirm it was possibly the best gelato we’d ever tasted anywhere.

Masanti’s mastery of gelato is part of his legacy. His grandfather was a gelato-maker from near Lake Cuomo, who prospered and moved to Madesimo in the Lombardy Alps, where he opened the Hotel Androssi. By the time Masanti, born in Milan in 1970, was 5, he was helping his grandfather make gelato for hotel guests.

When he was 13, Masanti inherited the restaurant adjacent to the hotel from his grandfather; it wasn’t until he was 19 that he reopened Il Cantone, and swiftly garnered attention throughout Italy.

“I was the boss,” he said, “but here I was so much younger than the people who had worked there for so many years. I had to be careful and respectful. I couldn’t just say ‘Here is your pay from this kid’; I had to say, ‘Oh by the way, there is some money for you over there...”

Meanwhile, Masanti was preparing for his career in hospitality. He earned his bachelor’s degree in hospitality at the Hotel Institute Crotto Caurga Chiavenna, followed by three years at the University of Milan, where he majored in public relations. During his studies, he was sustained by the meals his grandmother in Milan cooked for him. “She would start cooking in the morning,” he said, flashing a grin, “ just for me. I would come home and eat.”

V. Sattui president Tom Davies was vacationing in the Italian Alps with his family when his daughter read about Il Cantinone. They decided to try it, and after a memorable meal, a friendship was born.

“What we like (at Il Cantone) is that we produce everything from cakes to charcuterie,” he said.

Because the Masantis close their restaurant each year after Easter, and don’t open again until October, they agreed to come to the Napa Valley in 2014 when V. Sattui was celebrating its 125th anniversary. Masanti brought his Il Cantone team to the winery to prepare a feast for the Harvest Ball. They enjoyed the experience so much, they agreed to come back this year for a longer stay, April to October.

One of the earliest proponents of the Slow Food movement, Masanti said he learned as a boy about products by traveling with his grandfather to local farms. “One had the best cream, one the best milk, another the best eggs and of course, it was Italy; everywhere we had to eat.”

Masanti said he has been have a wonderful time exploring the products that are available in Northern California although he noted that the concept of “local” differs from Italy to California. “Alice Waters said food is local if it is within 100 miles,” he said. “For me, 100 miles is Tuscany.”

Masanti said he also likes the freedom that chefs have in California. “I like the California style of working. The problem with Italians is you always have a grandmother who is a better than the chef.

“Here people are more open, more adventurous to taste because there is a mix of cultures. In Italy if I prepared spaghetti with cilantro — they kill me.

Masanti showcases the local ingredients he has discovered in the lavish menu of options available for weddings at Sattui — from Duck Confit with Eggplant Caponata and Fig Vinaigrette to Italian-style Fish Carpaccio with Lemon Oil and Edible Flowers to a vegetarian Chestnut Sandwich with Pecorino Cheese.

“I love American weddings,” Masanti declared with a grin. “They’re so easy.

“You know what an Italian wedding is like?” he asked. “In Italy, as in France, every thing is the table. It means in Italy, a wedding is a minimum of 12 hours. First, you have 40-45 different appetizers. Then you are seated for the meal, the pasta, fish, the main course, cake and the dessert buffet. Then everyone dances for three-four hours and then they have spaghetti.”

“So when I come here, and they said three appetizers, maybe a salad, maybe a main course, a wedding cake. That’s it. And the wedding has to end at a set time, a few hours. Here is a dream.”

But after sampling Masanti’s hors d’oeuvres, it’s easy to see that the hard part would be for the bride who has to choose and not just order the whole list — plus that gelato, of course.

Stefano says his closest friends always request that he make this dish for them. He was kind enough to share the recipe with us.

Chef Stefano Masanti pauses in the prep kitchen for V. Sattui Winery in St. Helena as he prepares for a menu tasting.

Fried, but not fried, potatoes by chef Stefano Masanti.

Parmesan lollipops as prepared by chef Stefano Masanti for a menu tasting.