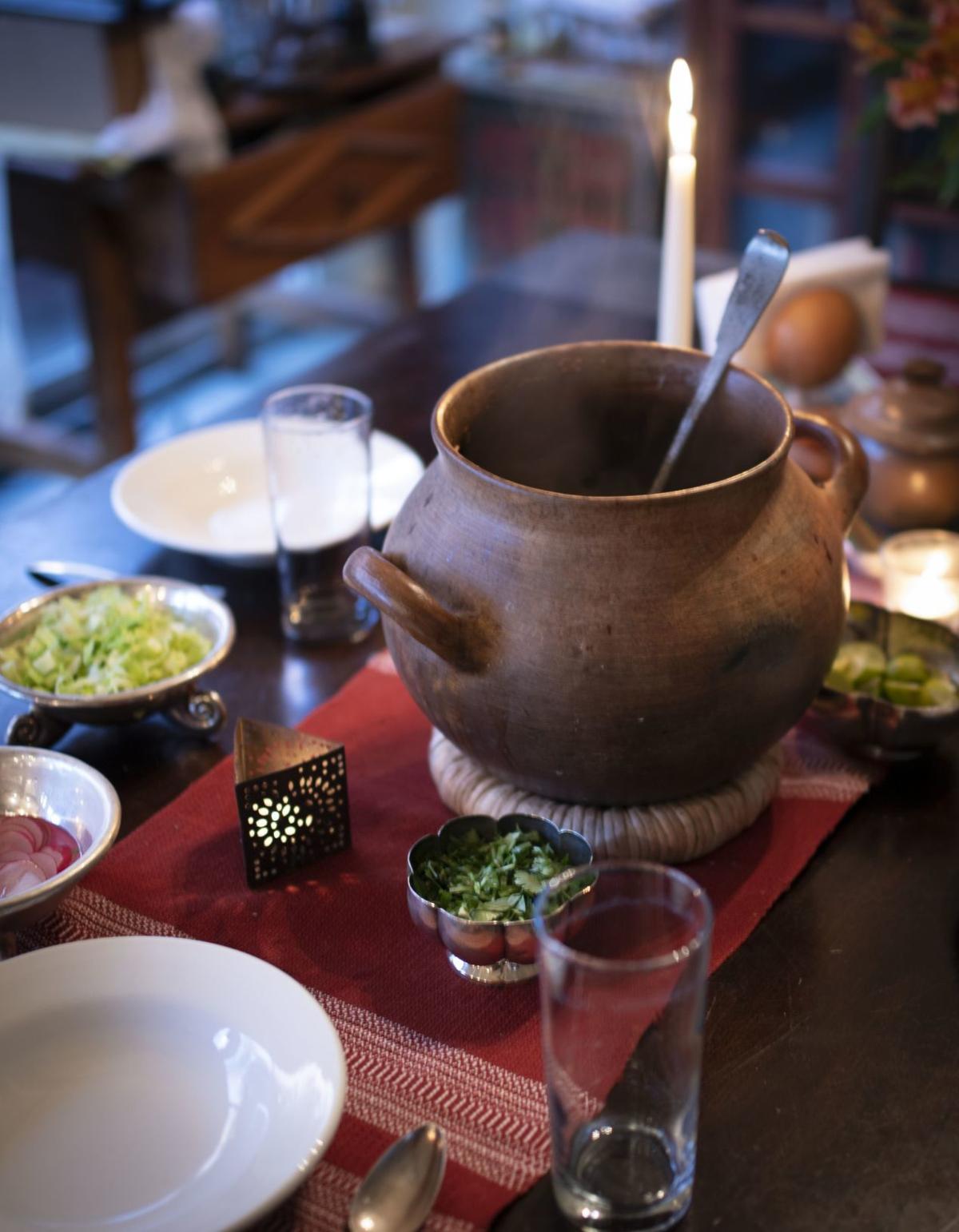 Pozole, a stew made with hominy, is traditionally served with a variety of garnishes. 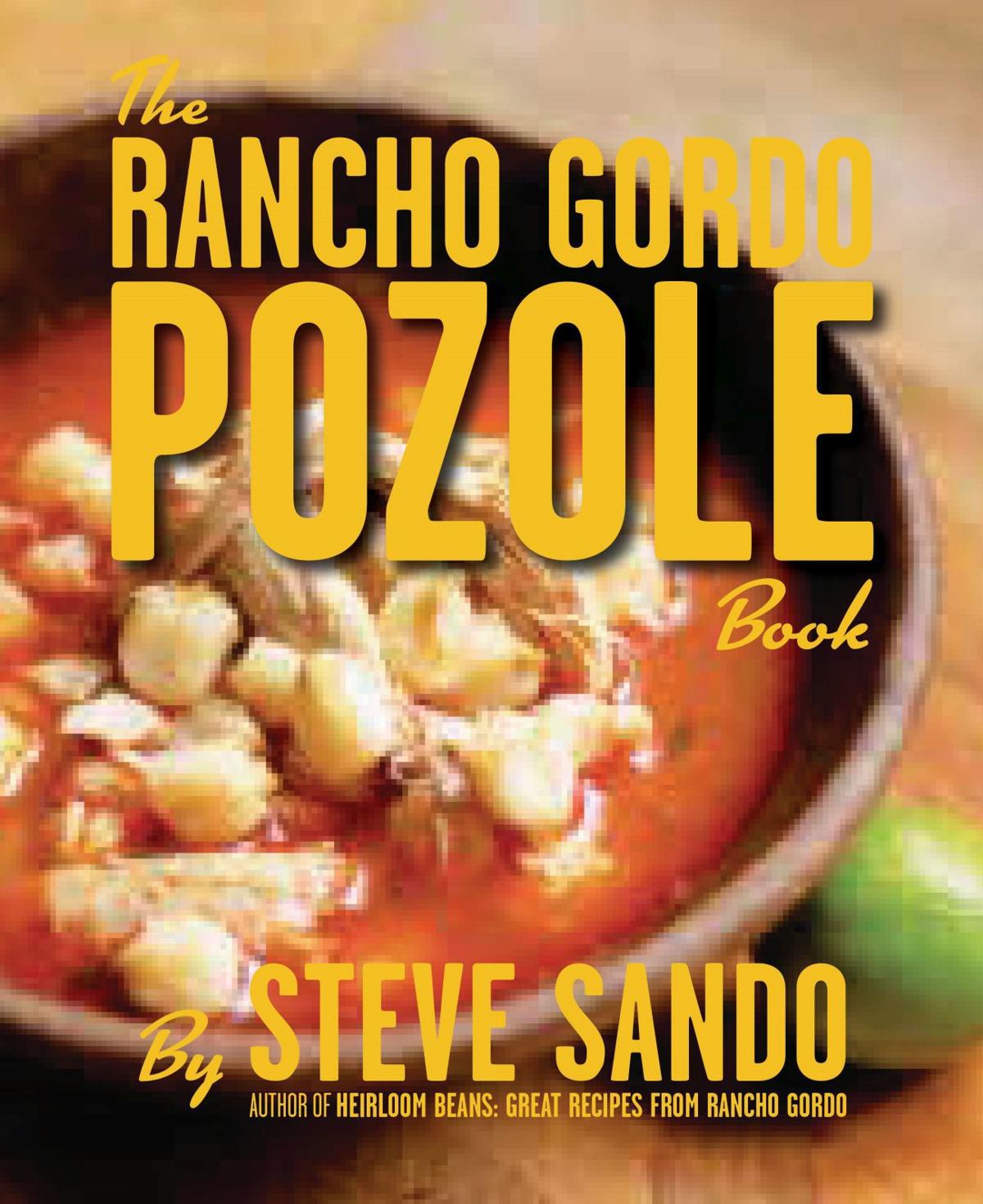 Napa author Steve Sando has published a guide the ingredients and preparation of the traditional Mexican stew, pozole. 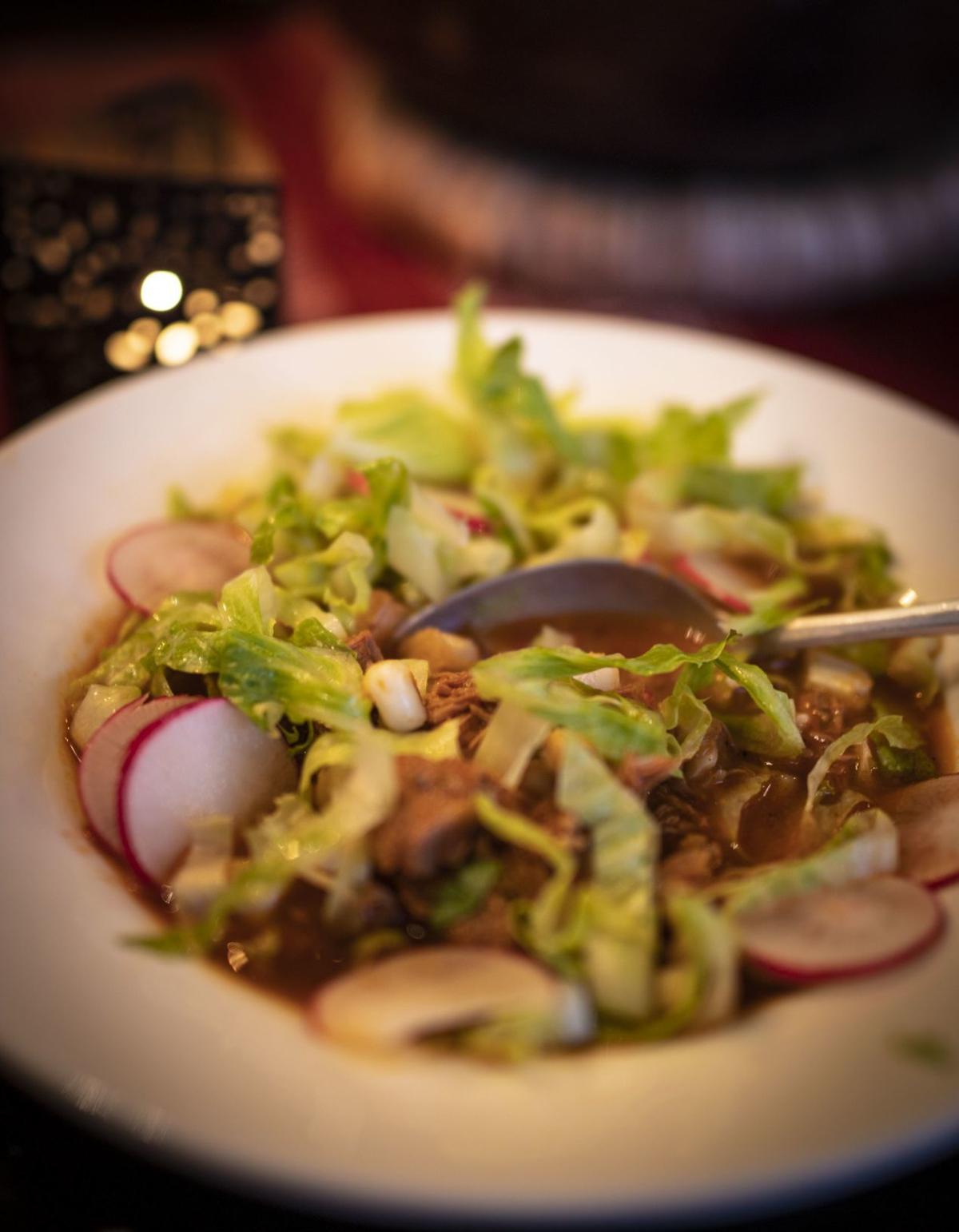 Pilar Sanchez's California Pozole is one of the receipes included in Steve Sando's new cookbook, "The Rancho Gordo Pozole Book." 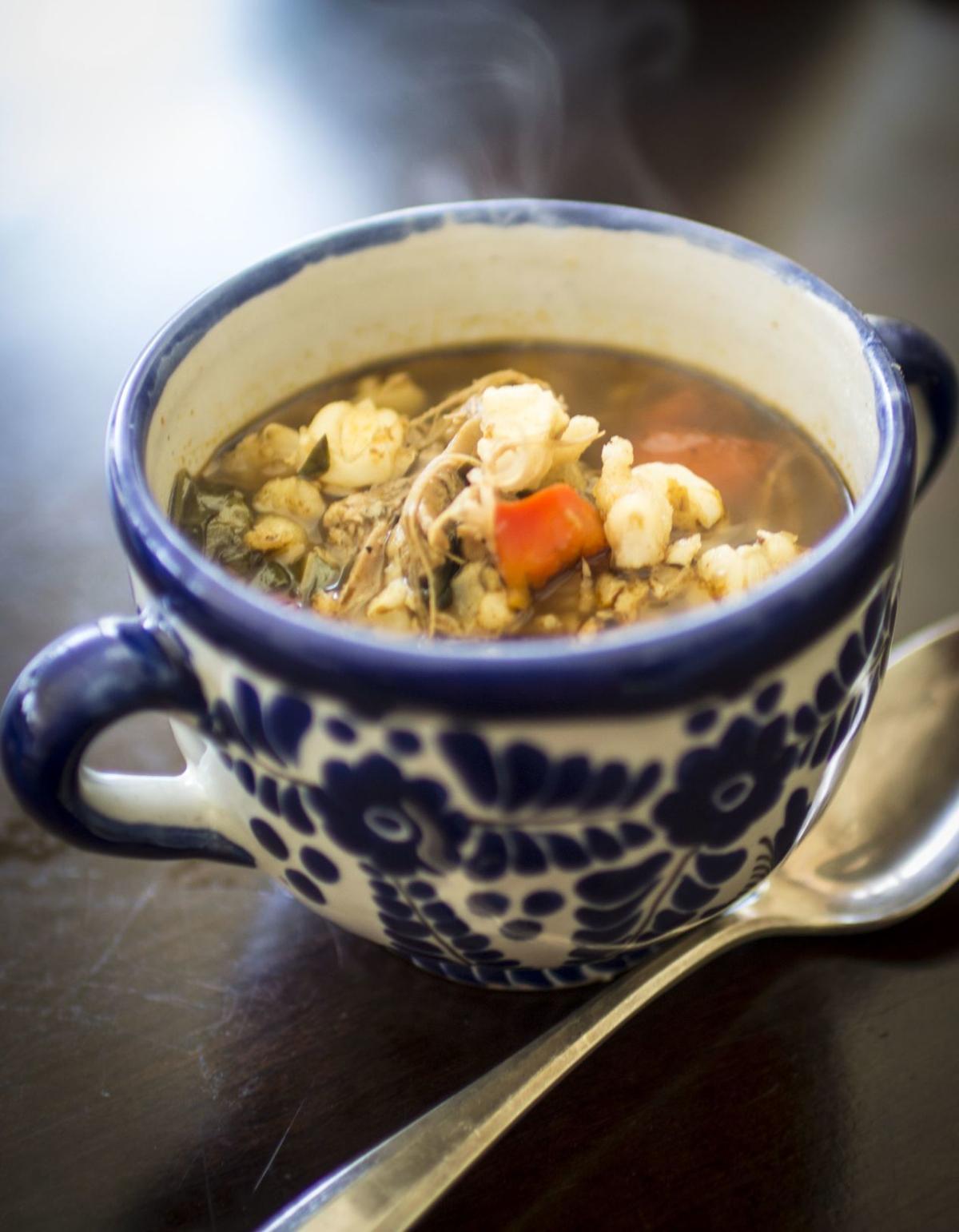 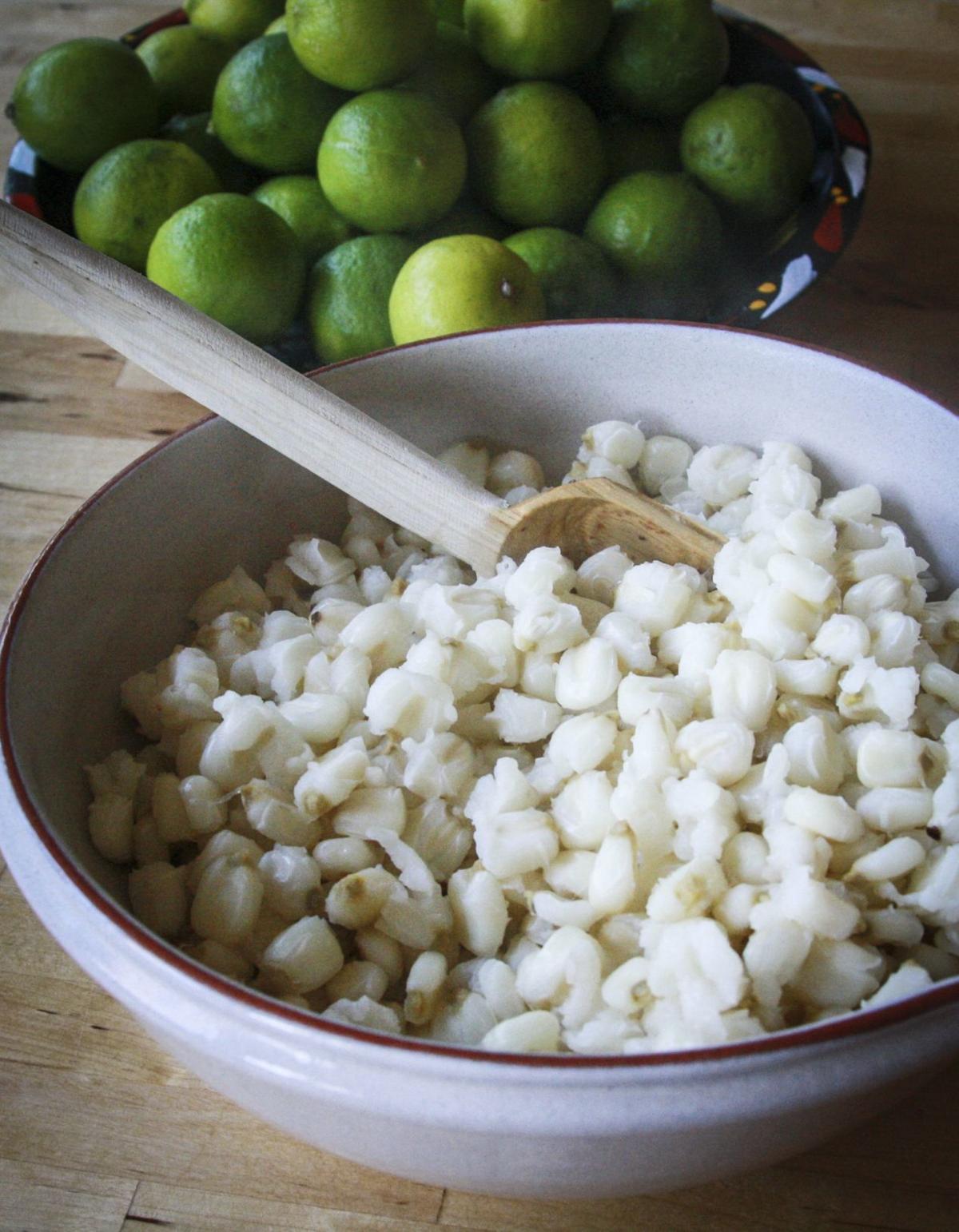 Hominy is a key ingredient of pozole. 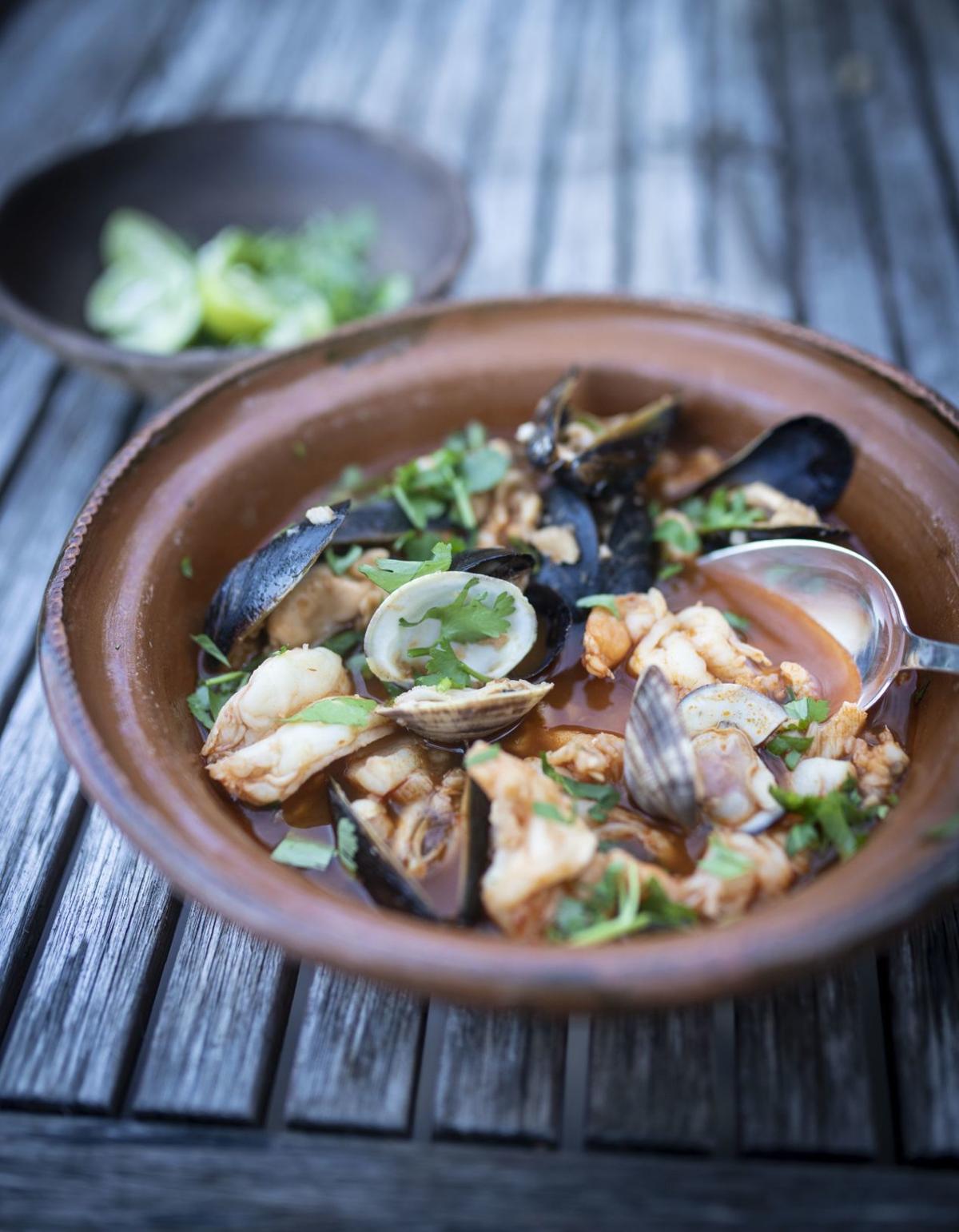 Regional variations of pozole throughout Mexico include this Acapulco-Style Seafood Pozole.

Steve Sando opens his new cookbook, "The Rancho Gordo Pozole Book,” by describing his own discovery of the traditional Mexican dish.

Sando, owner of Rancho Gordo, the Napa-based company that has championed — and helped preserve — heirloom beans, especially those of the Americas, writes:

“One warm evening in the early 1980s, I found myself in the beautiful city of Guadalajara, in the Mexican state of Jalisco. A group of us were visiting local friends and taking in the best of the city — and, for a lot of people, that list of “bests” includes pozole, the fragrant hominy stew found in most regions of Mexico.”

Growing up in California and thinking he knew all about Mexican food, Sando had, nonetheless, never heard of pozole. When the local hosts took the visitors to a pozolería, “the warm night, the beers, the new friends, the mariachis and the intoxicating smell of delicious food all hit me hard: I was in love.”

Following his host’s lead, he piled on garnishes, including — despite warnings — a hefty dose of chile de árbol salsa, made with those tiny, potent peppers. “At first, I couldn’t taste anything but my tears,” he writes. “But as I calmed down, the flavors took over — and it was perfect...I’d found my new favorite dish, a bowl that makes me laugh and cry at the same time.”

What follows is Sando’s roadmap for discovering pozole yourself, although possibly in a less dramatic way, and making a pot of it at home.

According to Sando, “There are a few twists and turns, but at its heart, pozole is no more than an elegant stew. At its most basic, pozole is a chile-infused soupy stew made with hominy and usually some kind of protein, which also helps make the broth.”

Hominy is corn that has had its skin removed, “in this case by cooking it in calcium hydroxide and then rubbing off the skins, a technique developed in Mesoamerica between 1500 and 1200 BC.”

This is where pozole has its roots. For the Mexican people (“who you may have known as Aztecs in your school days”), pozole was a celebration meal “and it included meat from conquered warriors.”

“Moving ahead to modern times, pozole has shed its cannibalistic origins,” Sando writes, but he considers it “one of the great, iconic dishes of the world. I believe it to be on par with paella, cassoulet, pho, and chile con carne.”

Transforming corn into a pozole-worthy ingredient requires a process called nixtamalization, which turns dried corn into something both digestible and palatable. “Beans and chiles helped the ancient societies of Mexico build their empires,” Sando writes, “but it was nixtamalized corn that fueled the construction of the pyramids and the development of an advanced society.”

After the dried corn is cooked, soaked and rubbed till the skin is removed, it can be ground to make masa or it can be used to make pozole.

Sando gives directions for trying nixtamalization at home, while also noting that this “is obviously a lot of work. All this leads me to prepared hominy, a product of the American Southwest. Fresh corn is dried by commercial processors, then producers nixtamalize it, cook it just enough to remove the skin, then dry it again. When you get the hominy home, you simply simmer it in water — perhaps with some onions — and in about an hour and a half, it’s cooked and ready to use.”

Another option is buying tinned hominy, readily available in supermarkets, but this, he notes “is a compromise.”

Once you have your prepared hominy, one way or another, Sando becomes your guide in what to do with it. He includes recipes for classic pozoles made with pork or chicken as well as regional variations, such as Alta Baja Vegan Pozole, Acapulco-Style Seafood Pozole, Oaxacan Pozole Mixteco, or Mexico City-Style White Pozole.

For fans of chef Pilar Sanchez, who with her husband Didier, once operated a popular restaurant in Napa, he provides her recipe for California Pozole, which, “is lighter than the traditional version and makes good use of the abundant zucchini so many of us have during the summer months.”

Sando includes notes for choosing garnishes and preparing broths as well as for the meats and poultry to use, including a “plea for quality meat.”

“Recently I made a French daube with meat from a gourmet butcher. I was using braising cuts and was shocked by the high price ... the daube was fabulous — so fabulous I decided to make it a week later, using the exact same cuts from the grocery store ... The entire family agreed without prompting that the version I’d made with sustainable raised, grass-fed beef was dramatically superior. For all my hard work, using cheap meat was no bargain. For your pozole, heritage pork is more than a fad and well worth looking for. The same goes for well-cared for, pastured chickens.”

He suggests, “If possible befriend your butcher and seek their advice. They know what they’re talking about and even though prices tend to be higher, they can help you save money by suggesting more reasonably priced cuts.”

And finally, Sando tackles the fiery topic of chiles — how to choose and use them in your pozole.

“If you’re not a fan of spicy chiles, don’t fret: I know quite a few Mexicans who don’t care for the heat at all,” he writes. “There’s magic in the dish without chiles, but I do hope you’ll try a little, according to your tastes.”

And for those who wish to fall in love as he did, he shares two recipes for chile de árbol salsa made with “those short, pointy little bullets of pain and joy.”

For the chile sauce:

5 to 6 cups vegetable or chicken broth

For the chile sauce:

Warm a dry comal or skillet over medium heat. Roast the onions, garlic, tomatillos and chiles, turning occasionally until charred and slightly softened, 15 to 20 minutes. Work in batches, if necessary.

Stem the serrano chile, but don’t skin or seed it. Place the poblano chiles in a large bowl. Cover with a plate and let rest for about 30 minutes. Transfer the other vegetables to a bowl and let cool, collecting their juices. Remove chiles from the bowl; remove and discard the charred skins. Halve each chile, removing stems, ribs and seeds.

In a blender, working in batches if necessary, combine the roasted chiles, vegetables and their juices, and enough hominy-cooking liquid to allow the blender blades to move. Blend well, scraping down the blender as needed.

In a large stockpot over medium heat, warm the oil. Add the vegetable puree; adjust heat to maintain a simmer. Cook, stirring occasionally, for 10 minutes. Stir in ground pumpkin seeds and cook, stirring, for another 10 minutes.

In the blender, combine the cilantro, oregano and 1 cup of broth. Blend well. Add to the vegetable mixture, along with 4 additional cups of broth.

In a medium bowl, toss the mushrooms with the epazote (if using), olive oil and a bit of salt. In a medium skillet over high heat, cook the mushroom mixture, stirring occasionally. Reduce heat to medium; cook for another 5 minutes until mushrooms are tender.

Add the hominy to the vegetable-puree pot. Cook until warm, 10 to 15 minutes. Add the mushroom mixture and adjust the seasoning, then return to a simmer. Thin with additional broth, if necessary.

Ladle into bowls and serve with your preferred garnishes.

A Taste of Pozole

Steve Sando will be signing copies of the book and they will be be serving pozole prepared by Fatted Calf.

The book will go on sale officially on our website on Nov. 29.

A look behind the scenes at the Napa Farmers Market.

Pozole, a stew made with hominy, is traditionally served with a variety of garnishes.

Napa author Steve Sando has published a guide the ingredients and preparation of the traditional Mexican stew, pozole.

Pilar Sanchez's California Pozole is one of the receipes included in Steve Sando's new cookbook, "The Rancho Gordo Pozole Book."

Hominy is a key ingredient of pozole.

Regional variations of pozole throughout Mexico include this Acapulco-Style Seafood Pozole.