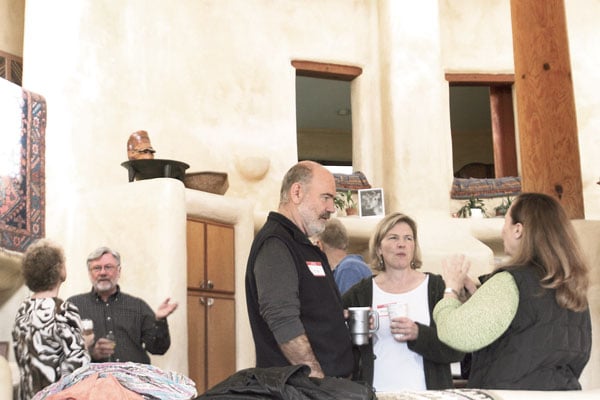 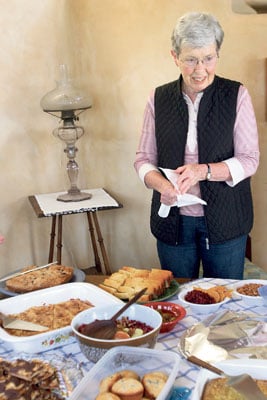 Marilyn Betcher, one of the original founders of the brunch bunch in Alta Heights, surveys the table at a recent Sunday gathering. 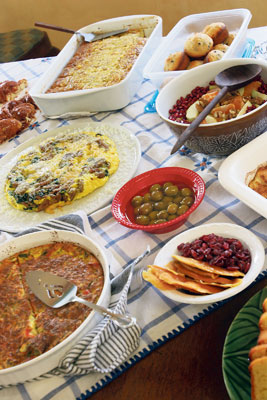 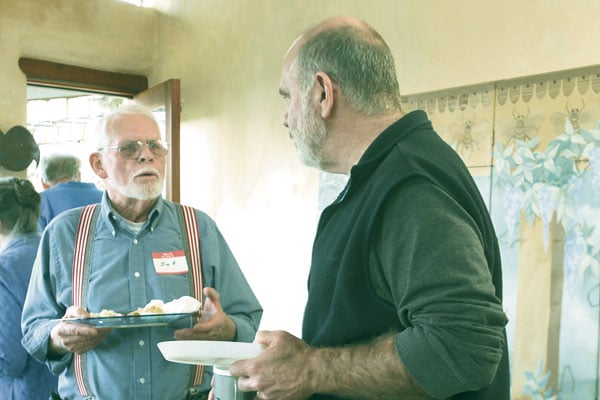 Four years ago when Karla Stromberger was facing ankle surgery, she decided the occasion called for a party.

“I knew I wasn’t going to be able to drive for eight weeks,” Stromberger, a retired physical therapist for the county school department, explained. “I thought I’d be proactive and invite some of my neighbors to brunch. I wanted them to know I might need help.”

More than a dozen neighbors turned up at the Atla Heights home where Stromberger had lived since 1975, bearing all kinds of breakfast dishes. Among them was Marilyn Betcher, who decided the gathering was so much fun, she proposed they do it again, Stomberger said. “From there, it just grew,” she said.

Four years later the neighbors still gather once a month, sharing recipes and updates on what everyone is up to. Each month a different person hosts the brunch. Everyone brings a dish and their own coffee mug. The host provides coffee, tea, plates and silverware.

Betcher first took on the job of coordinating the get-togethers. After a year Stomberger took over the job, sending out an e-mail to see who wants to host the group, and then notifying the rest. The list grew to about 80; but usually between 20 to 50 people show up each time, Stromberger said, noting it’s just the right size.

“The youngest person who ever came was 2 or 3 months old and the oldest was in their early 80s,” Stromberger said.

She also now sends out an e-mail after the brunch with photos of items that were inadvertantly left behind.

With all the options available for a brunch dish, the potluck part is always a surprise, she added.

“The thing that amuses me is what comes,” Stromberger said. “Sometimes it’s a lot of egg dishes, other times everyone brings fruit.”

A recent gathering, hosted by neighbor Phyllis Hunt, saw the table filled with egg dishes, along with coffee cakes, sausages and fruit salad. Jim Hie, however, brought his home-cured olives and homemade habañero sauce. “I do about 25 gallons of olives a year and give them away,” he said. “And I make six gallons of habañero sauce.”

One of her personal favorites, Stromberger said, is a blueberry bundt cake that Rich Collins bakes from a recipe he found on About.com. “He brings it warm,” she said.

“I’m the one who brings brownies,” Stromberger said. “That way we have some chocolate for breakfast,” she added, alluding to one of her favorite cookbooks called “Chocolate for Breakfast” and written by local innkeeper Barbara Passino, owner of Oaknoll Inn.

Stromberger also described another of her favorite brunch dishes. “I call it ‘Keeping the cardiologist in business,’” she quipped.

“I butter a 9-by-13 (inch) dish so that the cheese and eggs don’t stick. I usually use two cheeses, cheddar on one layer and jalapeño jack cheese on the other layer. No measurements, just one layer of cheese about halfway up the dish. I cut up at least four corn tortillas into smallish pieces — maybe thumbnail-size — and spread them on top of the cheese. Next I chop up three jalapeños in fairly small pieces and spread them on top of the tortillas. Sometimes I add some chopped onion at this point. Then I put on the last layer of cheese, to the top of the dish.

“For the size dish I use, I beat up four eggs with some milk and pour it over the mixture. I then add more milk until you can see it at the top of the cheese, but not to the top of the dish.

“Some people add some baking soda and/or flour to make it more substantial and keep it from falling quite so much when it is transported after coming out of the oven.

“I also put a couple of toothpicks in the cheese while it is cooking to keep the foil off of the cheese, so that it doesn’t stick.

“Oh, and make sure you wear a glove on the hand you hold the jalapeños with when you are cutting them up so that none of that heat transfers to your skin.

“As you can see, it is a bit of a loose recipe,” she concluded.

It takes very little effort to get a regular neighborhood potluck going, Stromberger said. “Someone has to manage the e-mail list and phone list, and make sure there is a volunteer to host for the next month. It helped once we set a specific day of the month to do this. After that we built flexibility into that schedule.”

A bocce team has grown out of the get-togethers, and so has a lot of recipe-sharing, but most of all, Stromberger said, it’s friendships that have grown. “It’s really fun seeing how the neighborhood really is a neighborhood.”

Stromberger has shared some of the recipes that have have turned up at different brunches. In addition, Napa chef Sarah Scott, who is often spotted at the brunch, has shared some recipes, and we culled one from Barbara Passino’s cookbook that does start a morning off sweetly, “Chocolate for Breakfast.”

This recipe is from a friend’s collected “Kitchen Dinners,” which she circulated to friends for Christmas season 1988.

This recipe was originally created by Dolores Lawrence of Swanson, Ohio.

Marilyn Betcher, one of the original founders of the brunch bunch in Alta Heights, surveys the table at a recent Sunday gathering.

Jim Hie, left, discusses his habañero sauce with Bob Hurley, who had bravely sampled it.
© Copyright 2021 Napa Valley Publishing, 1615 Soscol Ave. Napa, CA | Terms of Use | Privacy Policy | Do Not Sell My Info
Powered by BLOX Content Management System from TownNews.com.
You don't have any notifications.