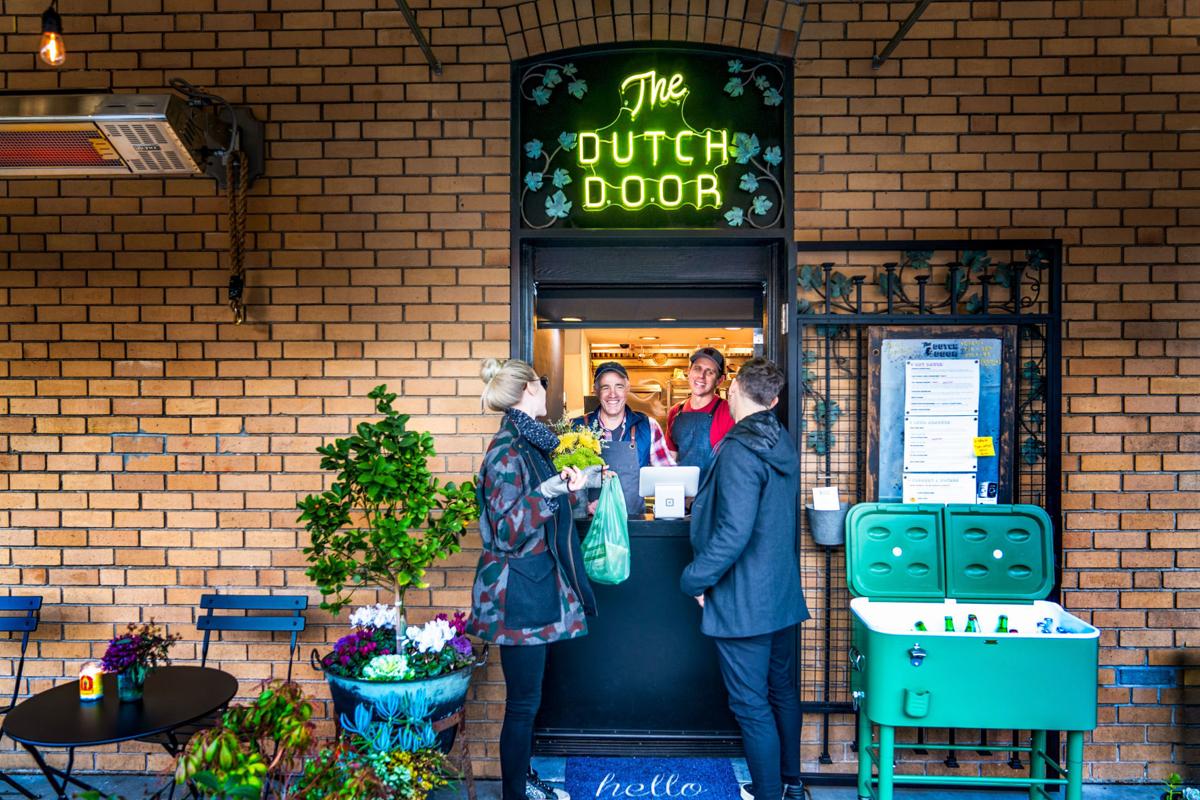 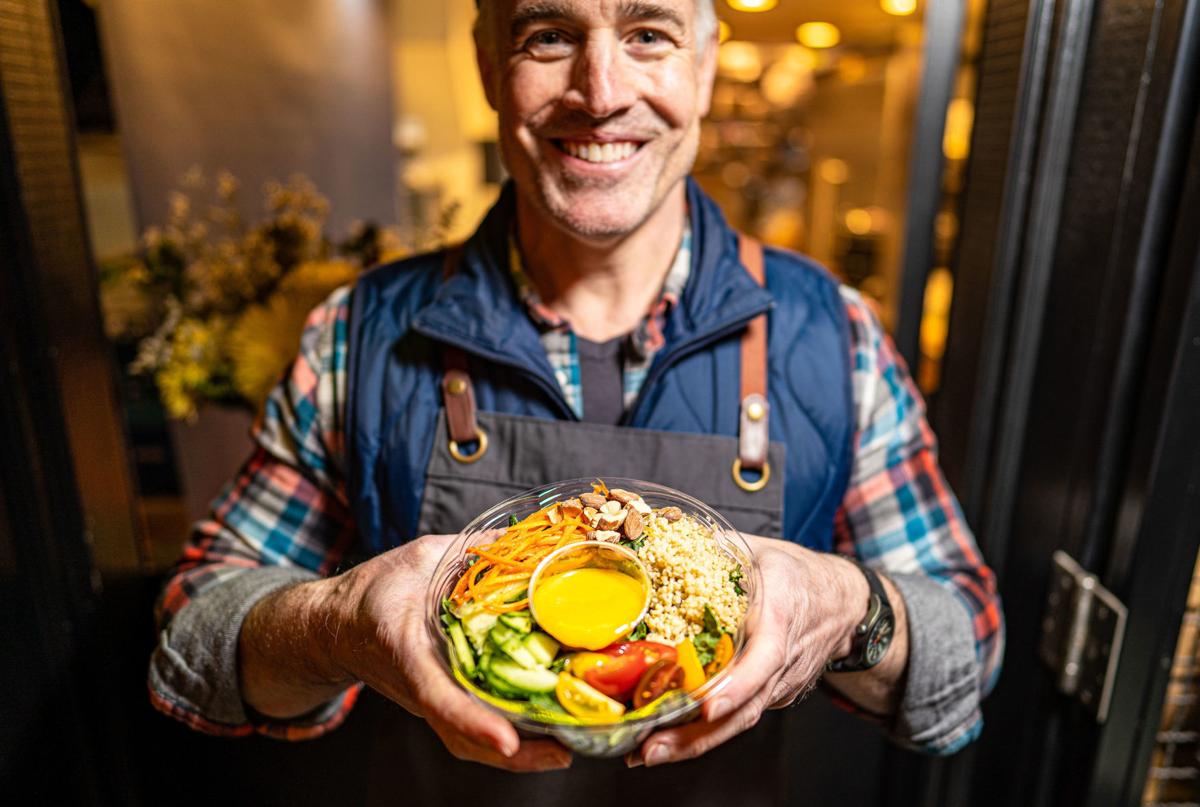 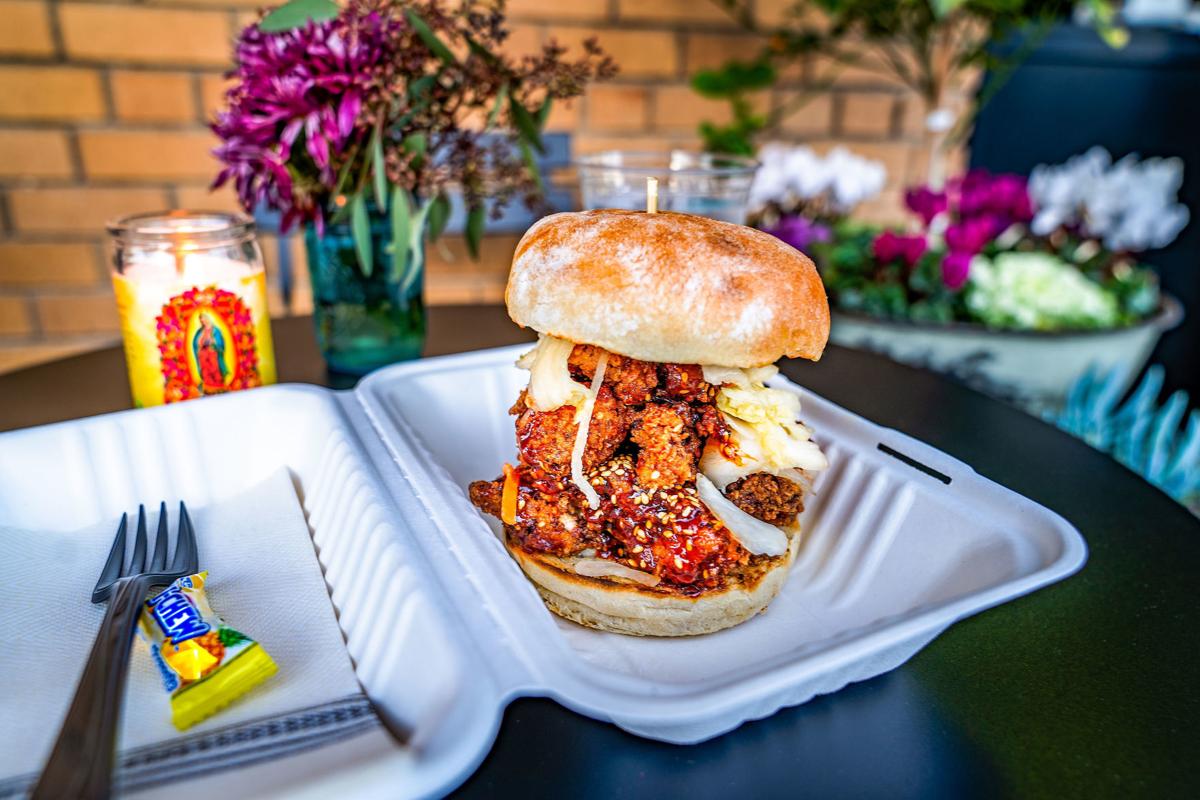 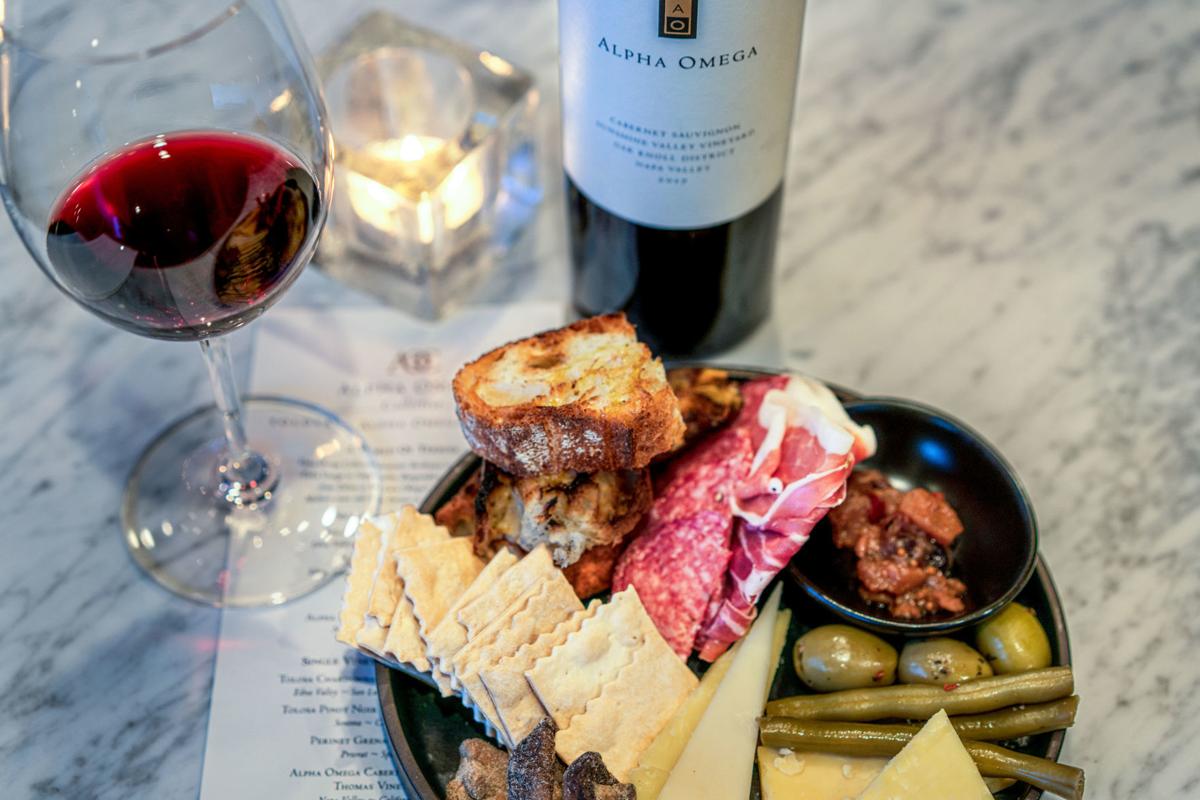 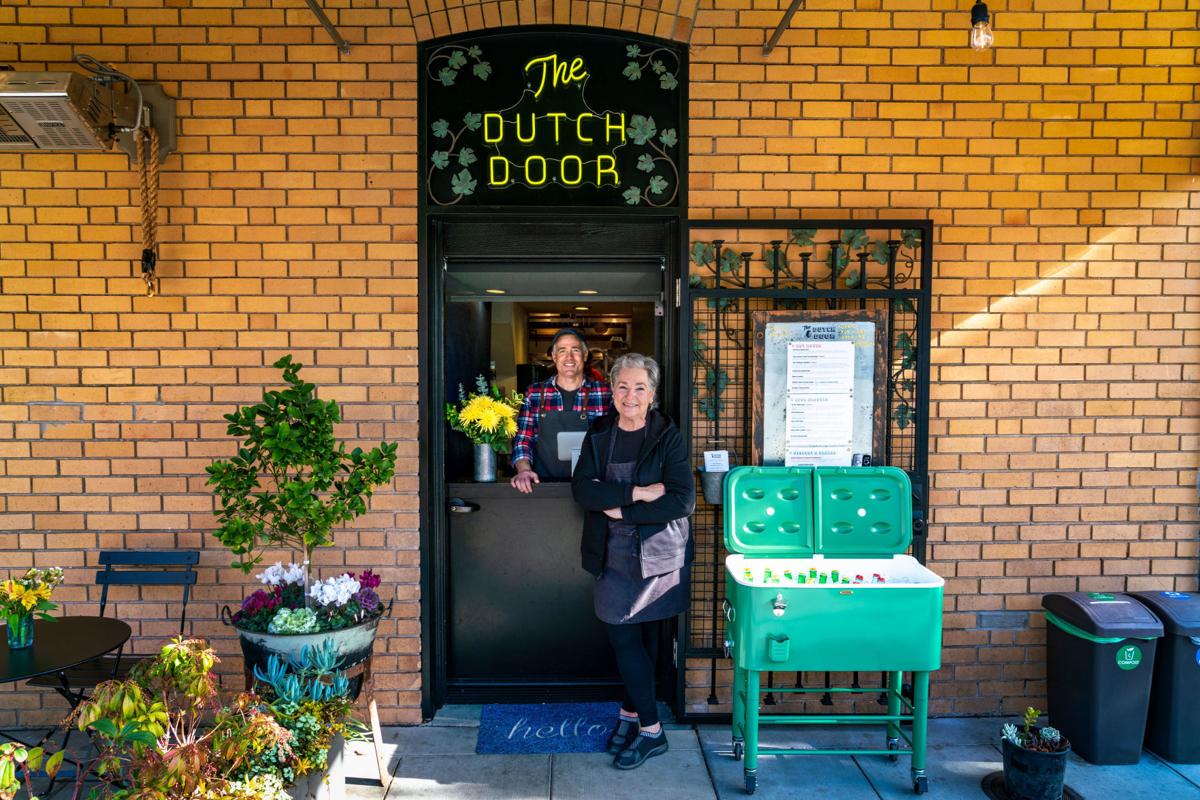 Not only is the food exceptional, but their range of offerings will thrill everyone from hard-core carnivores to plant-based fans, all looking for satisfaction and perhaps a nice photo opportunity for their Instagram feed.

“We wanted to open a place where the locals could come and eat good food that was healthy (everything is organic) and packaged responsibly (we use zero plastic) but that was also not going to cost them a small fortune,” said co-owner Mike Casey. “Brent [Pennington] just has a way of making anything he cooks taste great.”

Casey explained that the business and life partners opened The Dutch Door primarily because they felt there was a gap in the dining options in the Napa Valley that might provide quality fare that was “quick and non-fussy.”

“We love the food culture in the valley,” Casey said. “There is a long history of fine dining and marathon tasting menus full of rich food. And we enjoy all that, too, but what if you just want to grab a salad bowl or chicken sandwich to go? That’s where we come in.”

Casey and Pennington met in 2010 while working in San Francisco — both involved in marketing and public relations, both with an interest in food. Casey’s father had been a chef in Philadelphia, and Pennington had always been drawn to experimentation in the kitchen. His friends and family encouraged him to one day pursue his interest for cooking.

He followed his passion, and he and Casey eventually moved to Napa and opened the Pennington Provisions catering company. By 2018, the couple decided to open a restaurant, but the challenges around hiring staff and high rents led them to consider a range of options beyond the normal sit-down eatery.

“We heard that Alpha Omega’s Collective in downtown Napa had a commercial kitchen and that they were looking for someone who might be a good fit for the space and also a good fit for their vision,” Casey said.

The actual Alpha Omega Winery is located along Highway 29 between St. Helena and Rutherford. In 2018, the owners — Robin and Michelle Baggett — opened what they called a “collective,” which in essence is a remote tasting room to showcase their multiple wine brands, including Alpha Omega in Napa Valley, Tolosa in San Luis Obispo’s Edna Valley and Perinet in Spain’s Priorat.

“After deciding to open the Alpha Omega Collective in downtown Napa, we evaluated a few locations on both sides of the Napa River before opting for 1245 First St.,” said Jeff Knowles, Alpha Omega’s chief operating officer. “Not only was a presence on bustling First Street across from the Archer Hotel attractive, but equally enticing was the existence of a fully built-out commercial kitchen. Napa Valley is synonymous with good food. Therefore, offering freshly prepared, seasonal dishes made with quality local ingredients gives wine lovers one more reason to come to Alpha Omega Collective.”

The problem with any Napa Valley winery attempting to serve food is a maze of permit constraints that are meant to ensure no direct competition with restaurants. However, the Alpha Omega and The Dutch Door teams came up with an interesting approach to the conundrum — serve tasting-room fare on First Street and “gourmet-to-go” just around the corner.

“We selected Pennington Provisions, first and foremost, because Brent and Mike are terrific people and are as passionate about their vision as we are ours,” Knowles said. “We interviewed a multitude of potential culinary partners and tasted a lot of great food. The consensus was that they were the perfect fit for us and, equally importantly, a great fit for downtown Napa because they envisioned bringing something novel to our business with their complementary dishes and their gourmet-to-go idea of The Dutch Door. We knew our wine club members and fans of our wines would love their food.”

The result of the arrangement is that guests at the Alpha Omega Collective tasting room can order from a small menu titled “Pennington Previsions” or step outside and order from the walk-up window — actually a half-opened Dutch door — at The Dutch Door around the corner. A glass or a bottle of wine can be ordered at the tasting room by those looking to enjoy wine with either meal.

The Pennington Previsions menu was developed to pair with the various wines on the Alpha Omega Collective list and includes fairly standard cheese and charcuterie plates (one that includes wonderful crunchy, freeze-dried mushrooms and tangy-sweet fresh-made chutney — $23), a chewy winter crostini with whipped brie and espresso balsamic vinegar ($12) and a spicy-tender buttermilk-marinated Spanish fried chicken with Romesco aioli ($14).

The Dutch Door menu includes the Signature Supreme Dog that features Five Dot Ranch beef dog, roasted mushrooms, caramelized onions and tangy sauce on a toasted ABC Bakery bun and topped with crushed tater chips ($12); smoky plant-based chipotle chili that can be topped with cheddar cheese and includes a side of bread ($10); and various creative salad bowls ($12) that make for a tasty and surprisingly filling meal. A wild collection of sandwiches ranges from the “possible burger”(a plant-based burger “made in house and not in a lab” — $14), the Napa turkey wrap ($13) and the “Banh Mi Sando” that includes a mound of spiced pulled-pork tenderloin, toasted Bouchon Bakery baguette, avocado mayo, herb cashew pesto, pickled vegetables and Sriracha.

And although each item I’ve tasted is delicious, well thought-out and made with care, it is the K.F.C. (Korean fried chicken) sandwich ($14) that is the current showstopper. This is a wallop of a creation. Dare I say that it is the best chicken sandwich in the Napa Valley? Yes, I dare. Can it compete with those in the super-hip areas of Los Angeles or New York? Indeed it could. But who wants to share this wonderfully decadent twist on what has become an oh-so-popular as of late item — the humble fried chicken sandwich. In this case, though, The Dutch Door’s take is to douse chicken-thigh meat in Panko, deep-fry to perfection and then lightly toss with spicy-sweet gochujang sauce and sesame seeds then placed on a pillowy toasted local ABC Bakery bun that has been smeared with creamy avocado mayo and layered in Napa cabbage kimchi. Holy moly, this is a remarkable creation!

Those craving desserts will find a limited selection available that includes “Mamma Donna’s Italian biscotti” ($2.75). Most of the sweet recipes come from Casey’s mother, Donna, who also lives in Napa and can often be found at the restaurant, where she makes desserts and helps out with the business.

Other very good window-ordering food options can be found within Napa — Miminashi, Contimo Provisions, NapaSport, Grove at CIA and more — but The Dutch Door has sprinted out of the gate to create a wonderful, fresh and timely alternative for visitors and locals alike.

“I really value my health and really good, clean food that’s flavorful and not too expensive, and [The Dutch Door] delivers on all these aspects,” said Napa resident Ellison Wofford, who is the general manager at Sonoma’s Raen Winery and often picks up a meal after work. “It’s a place I can go to on a Tuesday night and then wake up the next morning and feel really good. Plus [Brent and Mike] are so friendly. I’ve been hoping since we moved here in 2013 that we’d get a place like this, and now here it is.”

“The future is tied to the past for us, especially as it relates to Debbie Lewis,” says winemaker Jos Widaman, when Tim Carl visits the Lewis winery founded in 1992 by Randy Lewis and the late Debbie Lewis.

Tim Carl looks back to the evolution of the Napa Valley dining scene and wonders, in light of the COVID-19 pandemic, what lies ahead.

After the Sept. 11 terrorist attacks, artist Mario Chiodo wanted to do something to address the hatred that had fueled them. The result is his sculpture honoring people who have worked to make the world a better place.