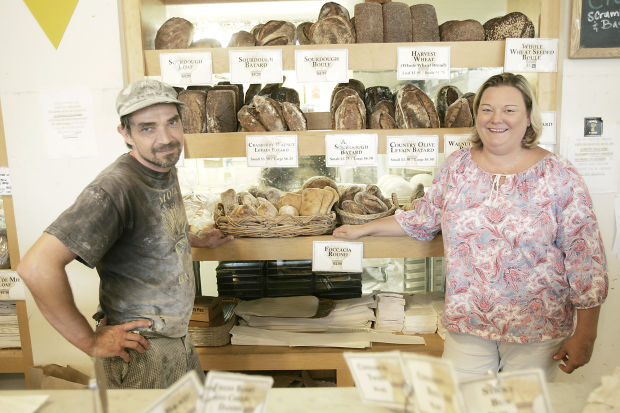 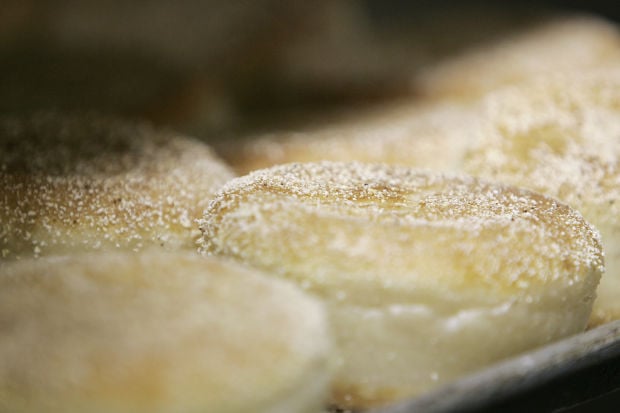 FRIDAY - SEPTEMBER 13, 2013 - NAPA, CA - A tray of English muffins in the kitchen at The Model Bakery which has recently published a cookbook called The Model Bakery Cookbook. J.L. Sousa/Register

FRIDAY - SEPTEMBER 13, 2013 - NAPA, CA - A tray of English muffins in the kitchen at The Model Bakery which has recently published a cookbook called The Model Bakery Cookbook. J.L. Sousa/Register

My favorite baking book had just about bit the dust, the cover fallen off, the pages splotched with cocoa and dribbled with melted butter, and the best recipes are all but indecipherable. I was thinking it might be time to retire “Fanny Farmer’s Baking Book,” which taught me to make pies, snickerdoodles and the monkey bread I still have to bake at the holidays.

(Note to new moms and dads: Think carefully about what you bake in those first years, because it will become a tradition and 25 years later, you’ll be greeted with, “What, aren’t you going to make monkey bread?” No new idea, however scrumptious, will be acceptable over, for example, monkey bread.)

I was wondering how hard it might be to find a readable version of “Fanny” when a new book arrived on my desk, which just might usher in a new era of baking.

Three years in the making, “The Model Bakery Cookbook” is a home-grown guide to good things, written by Karen Mitchell and Sarah Mitchell Hansen, the mother-daughter team that operates the valley’s thriving bakeries in St. Helena and Napa. Their collaborator for the project was Rick Rodgers.

The new book contains 75 recipes for their most popular offerings, including their memorable English muffins, of which Model Bakery sells and ships 800 to 1,000 each day. Other recipes cover the categories of breads, sweet yeast creations, quick breads, cakes, pies and tarts, and classic cookies.

It took three years, explained Hansen, because the real challenge was scaling down company recipes to a reader-friendly size. Not everyone, after all, wants to bake 1,000 muffins.

“We think most of the recipes people really could bake at home,” Hansen said. “Some, of course, are more complicated, like the English muffins.”

For the record, these plump, free-form muffins, which in no way resemble supermarket things, require making a yeast “biga” 12 hours in advance, and several hours of mixing and rising before they are cooking in melted butter on a skillet. There are some things one still prefers to buy at the shop.

On the other hand, other breads, like the dinner rolls, focaccia, ciabatta and even the pain au levain, made with wild grape yeast starter, get such carefully detailed instructions that an inspired baker, experienced or otherwise, is likely to succeed.

In between recipes for the cream current scones, cheese danish, morning glory muffins and brandied pumpkin pies, the authors share stories of a baker’s life.

Mitchell recounts how she grew up in Portland, Ore., “in a family of good cooks” that included her Auntie Emma, who owned a well-known restaurant called Berg’s Chalet. Auntie Emma’s recipes inspired some of Model’s products, including the Berries and Cream Cake.

After traveling around the U.S. and Europe with her, John, then a Marine pilot, and Mitchell eventually found their way to the Napa Valley in the 1970s.

In 1984, she was operating a catering business out of a back alley, and coveting the site of what was then the St. Helena Bakery on Main Street.

“The bakery products available in the Napa Valley in the early 1980s were San Francisco sourdough breads, often made from mixes,” she writes. “There were almost no artisan breads. Having traveled throughout Europe, I had fallen in love with European baking and was determined to bring European artisan baking to the Napa Valley. ... I had no idea how big the project would become.”

When the bakery became available, and Mitchell found herself the owner of the sole bakery in the upper Napa Valley and went to work transforming the 100-year-old building into a place that could create the products she was dreaming of baking, while retaining the charm, historical detail and “the feel of a 1930s cafe ... fortunately my husband is a building contractor with an MBA,” she notes.

“How the bakery got it’s name is a complete coincidence,” she writes. During construction when a friend dropped by to check up on the progress, “he mumbled something like ‘Ah, the model bakery.’ We asked what he meant. He explained that the bakery was known as the Model Bakery in the 1930s. We adopted the name instantly.”

Twenty years after the new Model Bakery opened to swift and continuing success, Mitchell’s daughter, Sarah, joined the family business, and was onboard when they were approached by Steve Carlin, who was developing the Oxbow Public Market in Napa. As a result of their conversations, the second Model Bakery opened in Napa in 2008.

“Mom still likes to go into the St. Helena bakery and make sure everything is running,” Hansen noted.

“Our baked goods are intentionally simple, with familiar old-fashioned flavors,” Mitchell writes. “Homespun is another way to describe their comforting taste and visual appeal. I have amassed a gold mine of recipes. They began as simple working recipes and have been refined and improved over the years.”

And now they are sharing them with fans.

As I was working on this story, I got a call from my son in Los Angeles, and when I told him I was writing about the new “Model Bakery Cookbook,” his ears, I could tell, perked up. “Really?” he asked.

Don’t worry, I said; a batch of cookies is on its way south. Some things, after all, are as good as monkey bread.

Three years in the making, “The Model Bakery Cookbook” is a home-grown guide to good things, written by Karen Mitchell and Sarah Mitchell Hans…