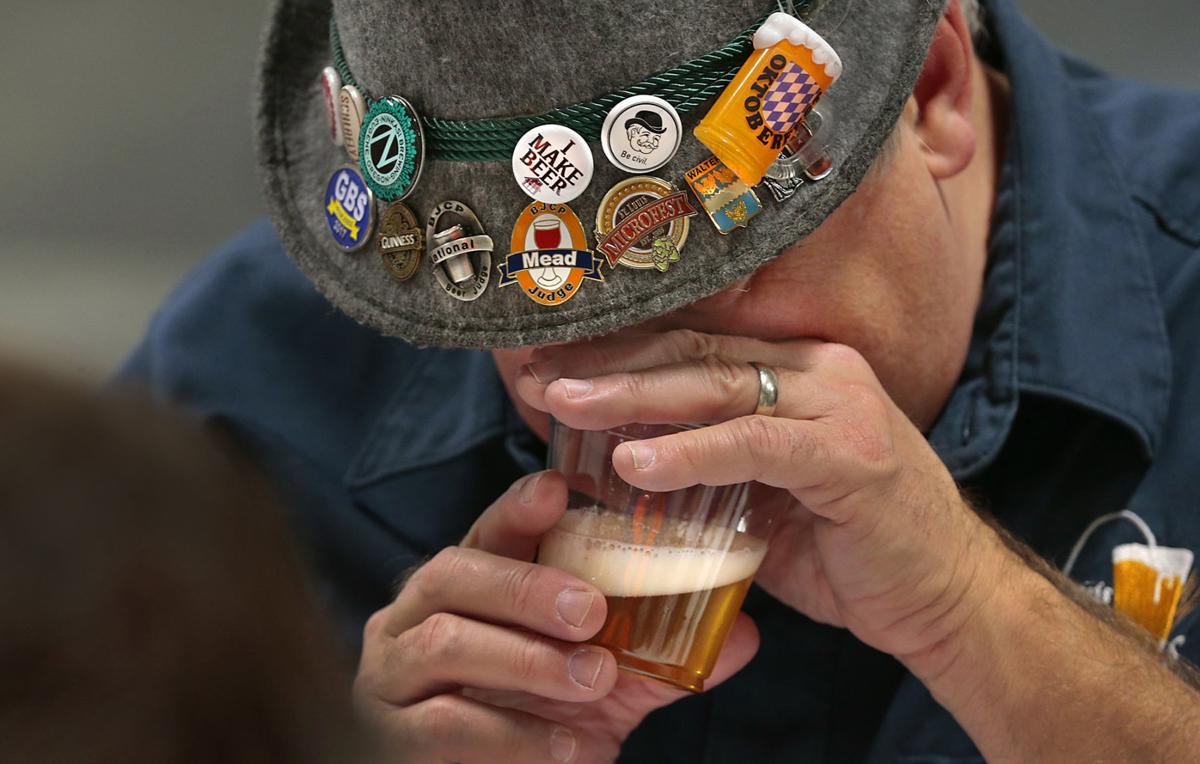 Mike Walters of St. Louis Brews judges the aroma of a light ale during the Happy Holidays Home-brew Competition on Wednesday, Dec. 11, 2019 at Alpha Brewing Company. Judges work in two-person teams, evaluating the best in aroma, appearance, flavor and mouthfeel -- a defined weight or thickness of the beer. 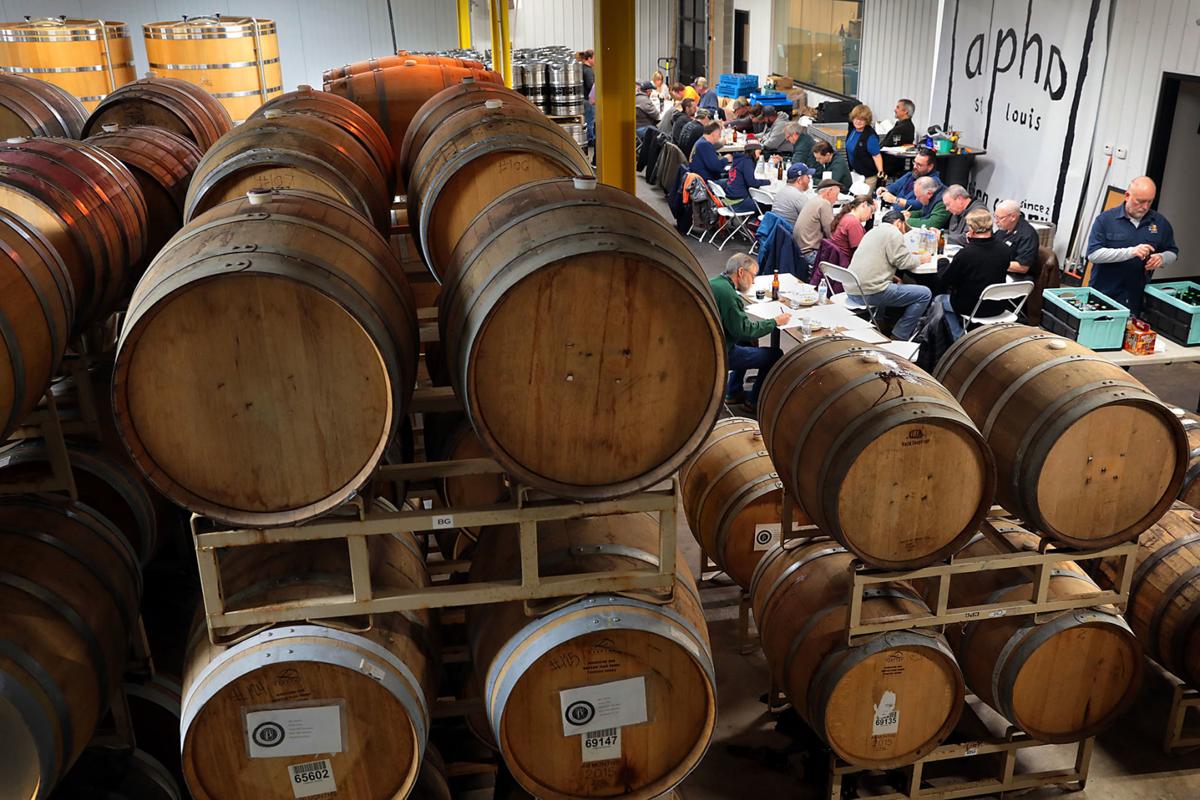 Wine barrels age a variety of beer as it rests on racks at Alpha Brewing Company as judges work to narrow down winners of the Happy Holidays Home-brew Competition on Wednesday, Dec. 11, 2019. The Alpha Brewing staff donated their space for part of the annual competition of home-brewers.

Mike Walters of St. Louis Brews judges the aroma of a light ale during the Happy Holidays Home-brew Competition on Wednesday, Dec. 11, 2019 at Alpha Brewing Company. Judges work in two-person teams, evaluating the best in aroma, appearance, flavor and mouthfeel -- a defined weight or thickness of the beer.

Wine barrels age a variety of beer as it rests on racks at Alpha Brewing Company as judges work to narrow down winners of the Happy Holidays Home-brew Competition on Wednesday, Dec. 11, 2019. The Alpha Brewing staff donated their space for part of the annual competition of home-brewers.

One example: "Define the techniques of krausening, adding gypsum and fining and how they affect finished beer."

The job is unpaid. There's a lot of science. But, for many, the worst day as a beer judge is still a pretty good day.

"It's drinking beer on a Sunday night and hanging out with like-minded people," said Chris Rahn, the owner of the Stubborn German Brewing Co. in Waterloo, Ill.

Certified beer judging, though not a well-known process outside brewing circles, plays an integral role in the craft beer industry. Many homebrewers hone their technique through the judging process, and the trends they embrace eventually filter through to independent breweries.

And sometimes, as in Rahn's case, a homebrewer becomes a beer judge becomes a brewery owner.

Rahn was working as an auto mechanic when he took up homebrewing as a hobby. He joined St. Louis Brews, the oldest homebrew club in the area, and studied to become a beer judge about eight years ago.

The Beer Judge Certification Program — run by a national organization of the same name — includes four main rankings: recognized, certified, national and master. Of the 7,200 certified judges in the United States, just 52 are masters. Rahn is one of nine national-level judges in the St. Louis region.

Four years ago, Rahn opened the Stubborn German. He has much less time to judge these days, but he volunteered at a session of St. Louis Brews' annual Happy Holidays Homebrew Competition earlier this month. .

The contest spans four days and attracts about 200 brewers and 70 judges from around the country.

Almost 600 entries were submitted, in categories such as porters, small stouts, strong stouts, fruit beer and European wild ales. The most popular category, with 47 entries, was a catchall of spice, herb and vegetable. Golden Sombrero, an ale featuring smoked habaneros, earned that crown.

Gary Glass, the director of the Boulder, Colorado-based American Homebrewers Association, rates St. Louis' Happy Holidays among the top 10% of the 600 sanctioned brewing competitions held each year across the country.

"People like to create something unique, and they're getting high quality evaluations of their beers," he said.

The judges at the Happy Holidays competition work in pairs and sample about half a dozen beers.

"More than that and you wear your taste buds out," said Mike Walters, the contest coordinator and a national-level judge.

Three pairs of judges evaluate each beer category. They swirl-sniff-sip, jot some notes, sip again. In between samples, they nibble on saltines and drink a little water.

Then the judges talk through merits and deficits. Points are awarded for aroma, appearance, flavor, mouthfeel and overall impression.

The winner in each beer category moves on to the "best of show" contest, which is overseen by the three highest-ranking judges.

Walters, who lives in Kirkwood, wears multiple hats at Happy Holidays. In addition to coordinating the event, held at Alpha Brewing Co. in Tower Grove South and the Shrewsbury City Center, he typically competes in some categories and judges in others. The software developer has been brewing for more than two decades and became a judge 10 years ago.

"If you have the ability to know what causes 'off flavors' and what good beer tastes like, it's a lot easier to hone your brewing process," Walters said.

He is a past best-of-show winner and, this year, took first place in the Pilsner category with a pale lager called Blank Czech.

Even with his experience, though, the execution can still fall flat. A few weeks before the contest, Walters worked with Stephen Hale, the founding brewer at Schlafly Beer, to make a batch for a St. Louis University course on beer and brewing.

Blank Czech came up short. The timing and temperature weren't quite right. But it gave the students plenty of fodder for their judging practice.

The SLU certificate in brewing science, which is new this year, is just the latest example of the evolution of homebrewing that Hale has seen since he took it up as a hobby 40 years ago.

"I would not say it was the Dark Ages, but it was definitely a lot different then," Hale said. "The ability to become better educated is far more widespread, and that's extremely helpful to the industry as a whole.

"It's a mistake for professional brewers to ignore what's going on in the homebrewing world."