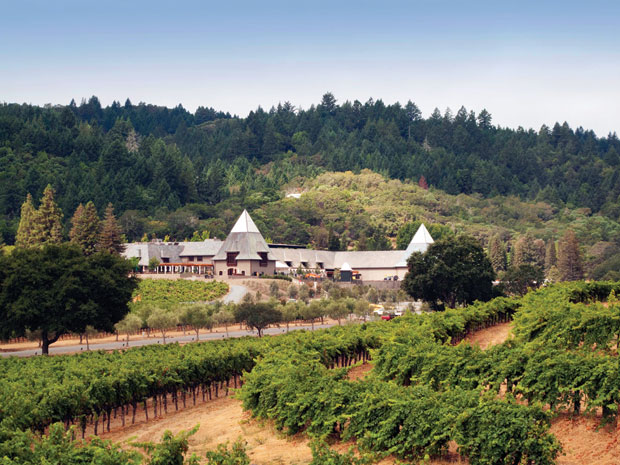 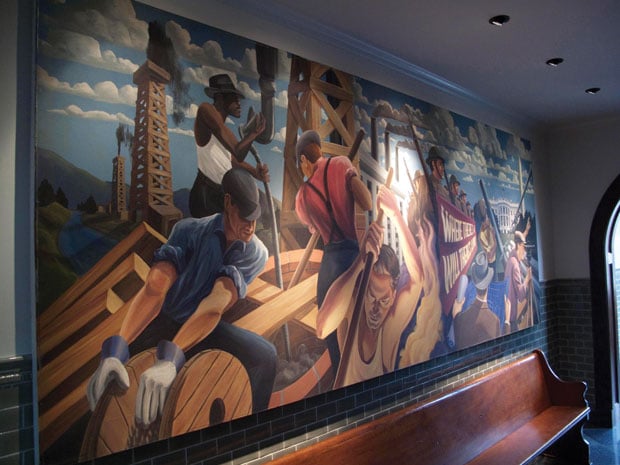 A WPA-style mural used in the film Tucker, the Man and His Dream greets visitors at the entrance to the Coppola Winery guest services area. Submitted photos 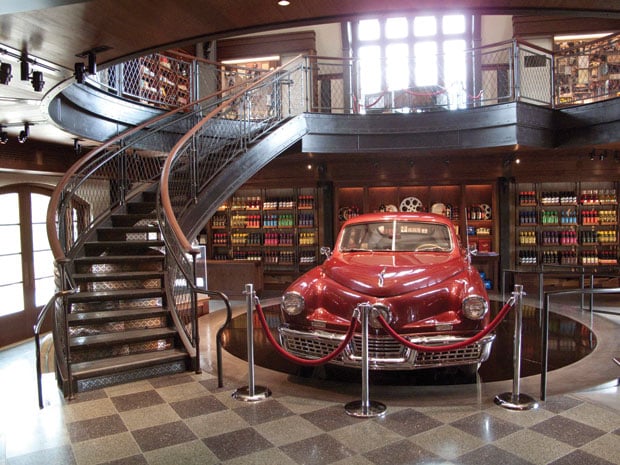 A restored Tucker automobile is displayed in the Coppola Winery “Movie Gallery” that also contains the famous “Godfather” desk and other memorabilia. 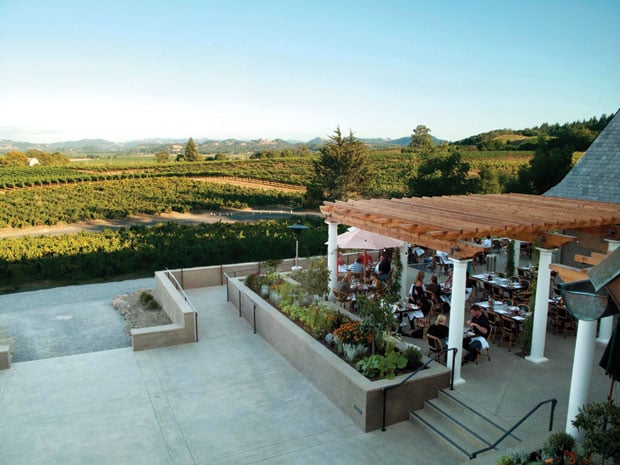 Wine tasting is not exactly family entertainment. Parking the kids on a hot bench outside while mom and dad sample some cool chardonnay is, for most rational people, not a great way to spend a family outing.

But in the bucolic hills west of Alexander Valley, Francis Ford Coppola and crew are making a stab at changing all that. In what can best be described as water park meets wine tasting, Francis Ford Coppola Winery near Geyserville is hoping to be the go-to family friendly destination in the wine country.

The former Chateau Souverain winery is nestled in the vineyards and the forests overlooking Alexander Valley. Built in 1973, the property went through a number of names and owners, including Beringer and its parent company Fosters Group. Coppola bought Chateau Souverain from Fosters in 2005, a move reminiscent of his 1995 purchase of the historic Inglenook Chateau winery, now Rubicon, in Rutherford.

“Francis fell in love with the property because of the existing structure,” said Corey Beck, director of winemaking and general manager of the Geyserville facility. “The winery and the slate roof. He also fell in love with the fact that it has a restaurant, and around here, that’s a hard permit to get.”

In addition to greatly expanding his company’s wine production, Coppola’s early-on vision for Chateau Souverain, according to Beck, was to create a family-oriented destination “resort.”

“The philosophy is about family and entertainment,” Beck said, “two things that are very dear to Francis. You have children and you live in San Francisco or L.A., you love wine, you love food and you want to come up to the wine country and experience it, but what do you do with the kids? He wants a place that can satisfy everybody. It’s about family, children, wine, and food in a destination for people to spend three hours or more.”

Guests arriving at the picturesque property are met with the original grand, two-pronged stairway leading to the main entrance.

“The one thing he (Coppola) didn’t change was the staircase; he’s very big on staircases,” Beck said.

After climbing the stairs, visitors get the first and major hint that this is not your average winery destination. Surrounded by the mansion-like winery and visitor buildings are two large swimming pools totaling some 3,600 square feet. Delayed by this year’s high rainfall, construction of the pools and surrounding sunbathing terrace should be completed in late fall. Backing the terrace is a row of 28 “cabines” (Italian for cabana) that guests can rent for changing and showers when using the pool area.

When completed, the pool area will feature a poolside café, certified lifeguards, lounge areas and, for those renting a cabine, distinctive “family” flags to hoist above the booth-like changing rooms.

According to the winery’s website, Coppola came up with the idea for the swimming pools while watching children play in the fountains in front of the Rubicon winery in Rutherford.  He also drew inspiration from Tivoli Gardens in Copenhagen, which blends common amusement park rides and activities with gardens, performance art, food and refreshments.

“Children can be looked after in the pool,” Beck said. “Mom and dad can have a glass of wine or something to eat. And we have a children’s menu — it’s all very kid-friendly and family friendly.”

Completing the outdoor activity area will be a performance pavilion and four bocce courts.

Visitors enter the winery complex through a new guest services building that serves as a centralized check-in. In  contrast to the fun and frivolity offered, the focal point of guest services area is a large mural used in Coppola’s 1988 film “Tucker, the Man and His Dream.” The WPA-style mural depicts straining construction workers, oil wells and marching soldiers carrying a banner that reads “Where there’s a will, there’s a way.”

Thirsty guests will not be disappointed. A full-service bar is adjacent to the guest services area and is flanked by the large main wine tasting area and a smaller tasting bar on a second level. Throughout the bar and tasting areas are displays of memorabilia from various Coppola films, including “Apocalypse Now,” “Dracula” and the Godfather series. A restored Tucker automobile, formerly displayed at the Rubicon winery, is now ensconced in a two-level room that also houses the famous “Godfather” desk and several Oscars earned by Coppola through the years.

Beck said that Coppola and his wife, Eleanor, took special, almost obsessive interest in every aspect of their new winery and visitor center. This includes the extensive selection of retail offerings displayed throughout the visitor center.

“For the most part, everything that you see here. Francis and Eleanor have either found or seen somewhere,” Beck said. “They’ve been very active in what this place is all about.” “He (Coppola) is not making a movie right now, so this was his set, directing and making sure that everything was done exactly as he envisioned.”

And for Coppola, his love of food was an important part of the vision he had for his Sonoma County winery. Appropriately, the new restaurant is named “Rustic — Francis’s Favorites.”

In the late 1980s, the Chateau Souverain Restaurant enjoyed fame among food fans thanks to its then-rising star chef, Gary Danko. After Danko’s departure — he eventually opened Gary Danko in San Francisco — the restaurant lost much of its appeal as a dining destination but remained popular among locals.

For Rustic, the Coppola team remodeled the space, upgraded the kitchen and expanded the dining area to include the outside terrace that affords a view of the Alexander Valley. The centerpiece is a wood-fired “parrilla,” a large, wood-fired Argentine grill manned by an “asador,” or grill master. Lining the walls of Rustic is a historic collection of more than 4,000 olive oil tins, labels and lithographic stones.

Chef Nicholas Petrilli is a wine country veteran who worked recently with Michael Chiarello at Yountville’s Bottega Restaurant. Petrilli said the Rustic cuisine is straightforward and uncomplicated, using fresh, high-quality ingredients. He said that Coppola, a lifelong foodie and cook, provided a clear direction for the restaurant.

“He would sit by the grill and watch as each dish came out,” Petrilli said. “He would suggest that we cook something a little more, change this … he knew what he wanted. It was up to us to make it work in the restaurant.”

According to Beck, the newly opened restaurant is a welcome addition to the otherwise sparse dining scene north of Healdsburg.

“All the locals who used to come up and have brunch here or whatever at Chateau Souverain could not believe how much they missed this place.”

Petrilli agreed, adding, “A good sign is the amount of repeat (local) business we’re getting.”

The wine list at Rustic is diverse, thanks to liquor laws governing restaurants owned and operated by wineries. Beck said that according to the law, only 15 percent of wines offered at Rustic can be Coppola wines, opening the list to competitors.

“What we’ve done, which has been terrific, is reach out to all our (winery) neighbors and those who we work with,” Beck said, pointing to labels from Trentadue, Seghesio and other nearby Alexander Valley wineries. “Every single one of them now has their wines on our list.”

Also on that list are several wines from Coppola’s Napa Valley winery Rubicon. Other than that, the two wineries operate as individual entities.

“We sell Rubicon in the restaurant but in terms of tasting, only our (Coppola) wines are served,” he said. “It’s really about Sonoma County, Alexander Valley, Dry Creek, Russian River … that’s the focus.”

“Rubicon is a little different in the sense that it’s 235 acres of organically farmed grapes, higher farming costs and estate wines,” Beck said. “Here it’s all about different tiers … we have your entry, everyday wine and then you move up from there. If you love Russian River chardonnay, great, here’s what we have. We have the best growers in Russian River including Dutton family, Saralee’s. We work with over 100 growers in Sonoma County now. When we first came over here we had five.”

According to Beck, who is also the current president of the Alexander Valley Winegrowers Association, most other wineries in the area look at Coppola’s big new facility as a boon to the AVA.

“Were all in this together,” he said. “If we can draw people up here they’re not just going to come here (to Coppola) but they’ll go to other wineries like Clos du Bois, Trentadue and everybody else. So everybody’s been really embracing of this. Francis has spent all this money on this (the winery complex) and they (other wineries) view it as marketing dollars that they don’t have to spend. So it works for everybody.”

Dan Berger On Wine: Vineglory: At least half the credit for a great wine should go to the grower

Winemakers in the United States can become stars, a phenomenon that doesn’t exist in Europe. Is it because they know that at least half the credit for a great wine should go to growers?

Napa Valley has lured many young winemakers from across the globe. But in the case of Laura Díaz Muñoz the trip to Napa was meant only to be a brief sidestep before moving on. That was in 2007. Today, she is winemaker and general manager at Ehlers Estate winery.

Wine lovers who are searching for specific bottles last week got a huge assist with the launch of a new search engine oriented to them that will make finding wines that much easier. It's called pix.com.

The outlook for restaurants: Reducetarianism and other food trends for 2022

The past few years have been beyond difficult for Napa Valley restaurants. Fires and the pandemic have combined to exacerbate an already tight labor market and forced many businesses to remain closed for long periods of time.

Allen R. Balik: The Wine Exchange: Looking for a ‘rewarding’ 2022

Allen Balik has decided to make 2022 the year to discover new wines, in addition to revisiting favorites.

Allison Levine is dreaming of Italy for the new year, especially of a winery she discovered in the Gavi region of Piemonte, Italy.

Signs that your phone may have been hacked

Signs that your phone may have been hacked

Grammar police! Are you using 'to whom' wrong?

Grammar police! Are you using 'to whom' wrong?

A WPA-style mural used in the film Tucker, the Man and His Dream greets visitors at the entrance to the Coppola Winery guest services area. Submitted photos

A restored Tucker automobile is displayed in the Coppola Winery “Movie Gallery” that also contains the famous “Godfather” desk and other memorabilia.

A rustic restaurant includes an outdoor terrace offering a spectacular view of the Alexander Valley. Submitted photo
© Copyright 2022 Napa Valley Register, 1615 Soscol Ave. Napa,CA | Terms of Use | Privacy Policy | Do Not Sell My Info | Cookie Preferences
Powered by BLOX Content Management System from TownNews.com.
You don't have any notifications.