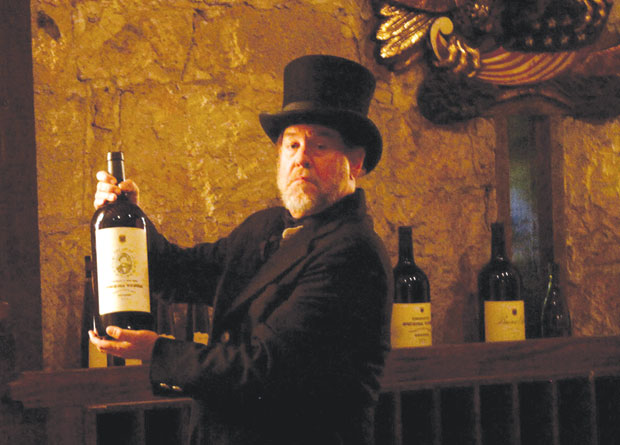 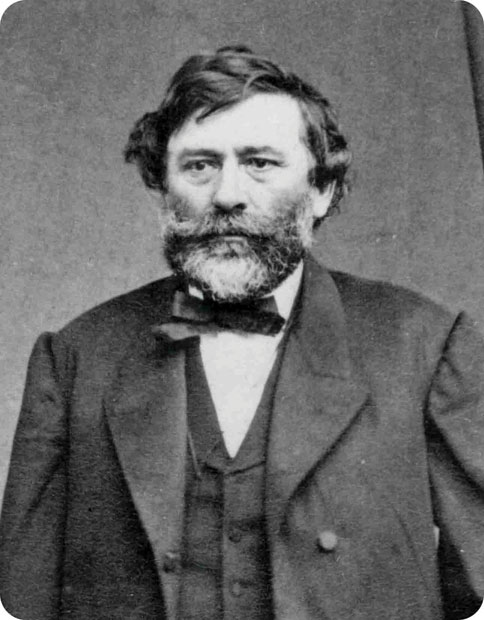 Count Agoston Harazsthy came to the U.S. from Hungary in 1840, and was eaten by a crocodile in Nicaragua in 1869, where he’d gone to make rum, after phyloxxera destroyed his vineyards in Sonoma. 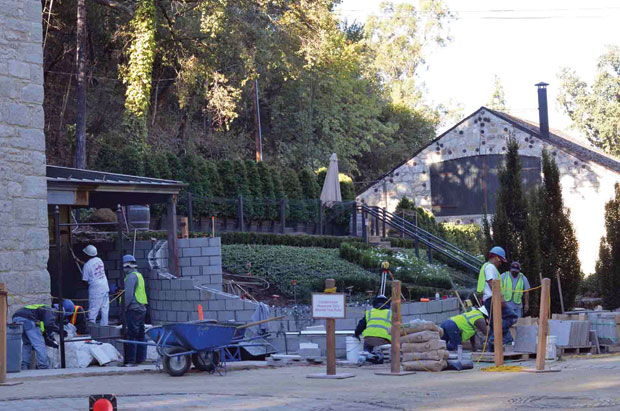 Workers are putting the final touches on restoration work at the historic winery before its celebration of Harazsthy’s 200th birthday on Saturday. Submitted photos

Buena Vista Winery is celebrating the 200th birthday of its founder, Hungarian “Count” Agoston Haraszthy and a rebirth of what was once California’s first and leading premium winery.

The winery is being reborn under the care of its new owner, Jean-Charles Boisset, a Frenchman with a passion for California’s wine history.

Haraszthy, known as “The Father of California Viticulture,” founded Buena Vista Winery in 1857 on a site in Sonoma where a christianized Native American had planted vinifera vines.

The winery predated Napa Valley’s Charles Krug by four years — Krug even worked for Buena Vista before forming his own winery.

Though once one of wine country’s biggest draws, Buena Vista has languished of late, having had five owners just between 2004 and last year, when Boisset Wine Estates bought the historic property.

Boisset, who has also reinvigorated the newer DeLoach Winery in Russian River Valley and Raymond Vineyards in Rutherford, regards Buena Vista as a star of his California holdings. It was the first winery in California he visited – when he was 11 – and he never forgot it as he and his father gathered an empire of wine in his native France.

Boisset acquired the property from Ascentia, the troubled wine company that finally expired on May 1, 2011.

He immediately set about revamping the wine offerings and is completing renovation of the old Champagne cellar, where he intends to make wine this harvest. The last time wine was made on the property was in the 1970s.

One step in restoring the winery’s reputation is to bring back some of fabled wines discontinued by recent owners, notably zinfandel and cream sherry.

He’s also reintroduced sparkling wine, although ironically, the Champagne cellar will be used to produce zinfandel and syrah from nearby vineyards that were once part of the 500-acre Buena Vista property.

The winery is also reintroducing a range of Sonoma wines following Buena Vista’s tradition. Recent former owners focused only on Carneros where they built a large modern facility that Boisset didn’t acquire. Most of the Buena Vista wines continue to be made there under contract, however.

Buena Vista will continue to offer Carneros wines and has also resurrected its respected Private Reserve label for its finest wines.

In addition, the playful Boisset has introduced The Count: Founder’s Red Wine, a $20 soft blend intended to appeal to those who don’t appreciate more tannic wines. Boisset donates $1 for every bottle of The Count sold in the tasting room to the Sonoma-Tokaj Sister City Committee.

The most significant restoration Boisset is undertaking is to the 1864 Champagne cellar. A new and expensive method was used to reinforce the walls against earthquakes. Instead of visible steel beams and bolts, the roof was removed and 60 six-inch holes were bored vertically in the thick stone walls every four feet around the perimeter of the building. These were then filled with steel reinforcing and epoxy so the building shows no sign of the work.

In addition, masons removed four inches of mortar between the large stones on the exterior and repainted it with matching mortar.

Inside, Boisset is creating a private club room for the Buena Vista Vinicultural Society, as he created the Belle Epoch Red Room at Raymond Vineyards.

The caves have been reinforced and will be used for visitor activities, too.

Also under way are a planned demonstration vineyard, a garden of food crops that originated in the Americas, stone paving, picnic accommodations, a new gate and improvements in the rustic parking areas.

“Count” Haraszthy, who was born in 1812 in Budapest in the Austro-Hungarian empire to a Hungarian noble family. He was the equivalent of a knight, to be called “sir;” he wasn’t really a count. Here, he was called colonel, a title of respect.

Haraszthy came to the United States in 1840, apparently the first Hungarian to do so. He settled in Wisconsin and planted vines, but later moved to San Diego, where he became sheriff, and then a state assemblyman.

He planted grapes vines in San Francisco and San Mateo, but it was too cool and foggy, so he bought a vineyard northeast of Sonoma in 1856. He started building the winery in 1857.

Haraszthy imported 353 wine varieties from Europe during the American Civil War, then California reneged on its promise to pay him.

In 1863, he founded the Buena Vista Vinicultural Society to support Buena Vista. That year, his sons Attila and Arpad married daughters of famed Mariano Guadalupe Vallejo.

Unfortunately, phylloxera started killing the vines, and he was blamed for mismanagement. The Vinicultural Society that he had formed fired him. Disgruntled, he left for Nicaragua to make rum, where he was allegedly eaten by a crocodile in 1869.

Boisset, who has a flair for the theatrical, is playing the connection with the visionary and his Hungarian roots to the hilt. He’s hired the local historic impersonator and actor George Webber, who has portrayed General Vallejo, founder of Sonoma, Mark Twain and others, to serve as “The Count.”

Webber has been promoting the brand in meetings with distributors and resellers around the country and will greet visitors once the renovation of the winery is complete.

Each Saturday, he appears in “The Count of Buena Vista,” a free historical performance at the winery. Tomorrow, in celebration of the anniversary, Webber will give his performance in the Sonoma Plaza, during a free 200th birthday celebration, from 11 a.m. to 2 p.m.

The winery is celebrating the date by holding a grand opening of the renovated Champagne cellar. Boisset has invited Hungarian officials to visit and sparked a sister-city agreement between Sonoma and Tokaj in Hungary. The winery and will even sell 50 cases of rich six-puttanyo Tokaji wine under the Buena Vista label.

Boisset has commissioned a history of Buena Vista and Sonoma by noted wine historian Charles Sullivan. It is scheduled to appear in January. “People need to learn that American has a long and respected wine history. It didn’t start in the 1960s,” Boisset said.

Agoston Haraszthy’s 200th birthday was Aug. 30, and to celebrate the Sonoma-Tokaj Sister City Committee is producing a free, three-hour program on Saturday, Sept. 1, from 11 a.m. to 2 p.m. in Grinstead Amphitheatre in the middle of the Sonoma Town Plaza.

The Sonoma-Tokaj Sister City Committee was created in the spring of 2012, and is made up of Hungarian-Americans in Sonoma and the Bay Area, as well as lovers of Buena Vista Winery and the Count.

A delegation from Tokaj led by Mayor János Májer is visiting Sonoma to celebrate the Count’s birthday and sign the official documents making Sonoma and Tokaj sister cities.

This free event is open to all, and will feature Hungarian music and dance, the signing of the Sonoma-Tokaj sister city agreement, a

bi-lingual production of a 20-minute play, “The Count of Buena Vista” and Hungarian culture exhibitions.

Napa's RD Winery has opened their large space to smaller brands who are just beginning and other brands wishing to expand. They call it RD Wine Collective.

Warren Winiarski: How the man who put California wines on the map is helping others deal with climate change

Winiarski shocked the world when his Stag's Leap Wine Cellars cabernet sauvignon beat the best of Bordeaux in the famed 1976 Judgment of Paris.

Three generations of the Balik family came together to celebrate Thanksgiving and Chanukkah with some special wines.

Watch Now: Good reasons to be careful with your credit cards

Experts say avoid these foods for a healthier mind

Experts say avoid these foods for a healthier mind

Count Agoston Harazsthy came to the U.S. from Hungary in 1840, and was eaten by a crocodile in Nicaragua in 1869, where he’d gone to make rum, after phyloxxera destroyed his vineyards in Sonoma.

Workers are putting the final touches on restoration work at the historic winery before its celebration of Harazsthy’s 200th birthday on Saturday. Submitted photos