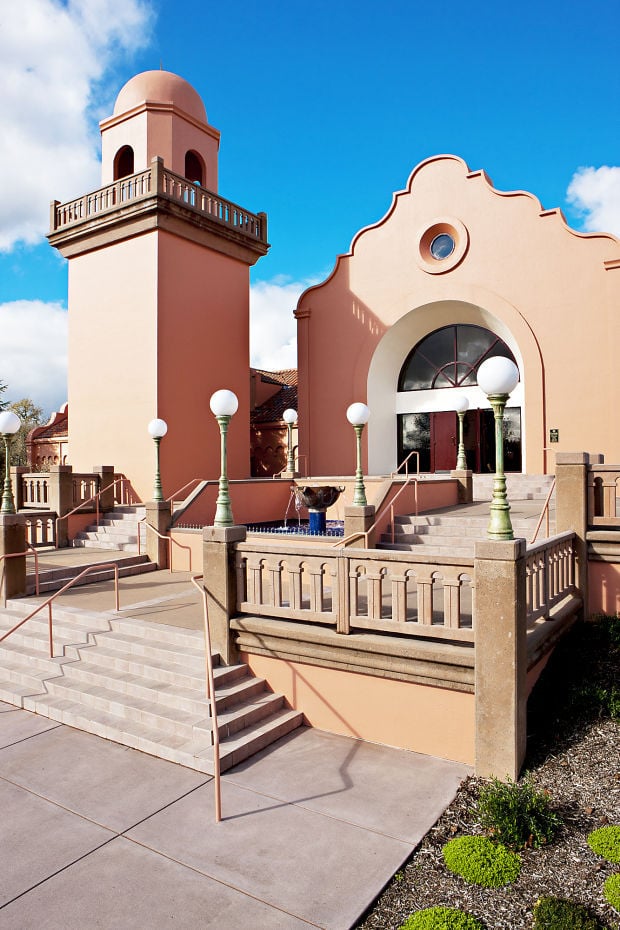 At the heart of the Oakville estate is the striking, mission-style winery. 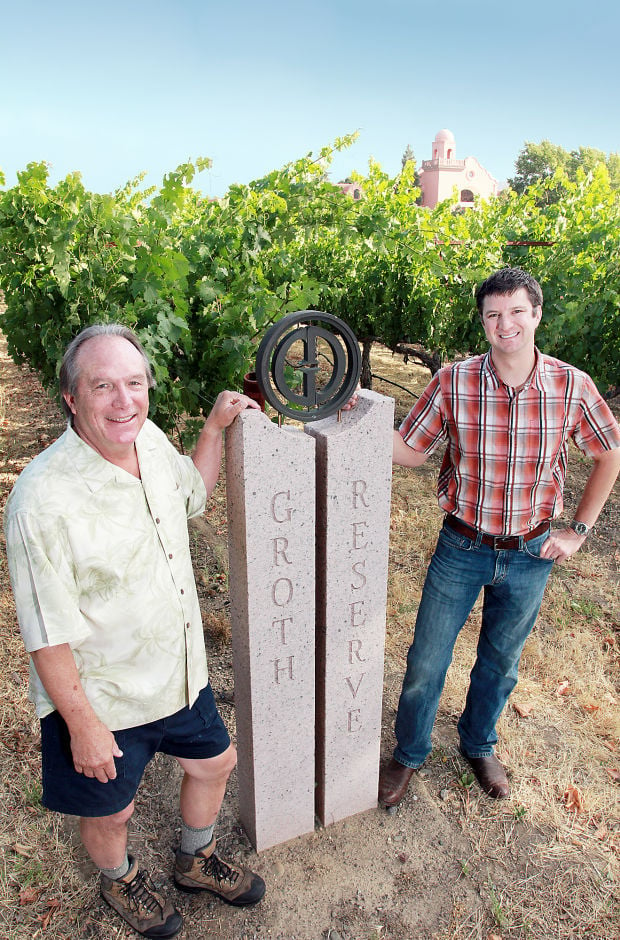 In 2014, winemaker Cameron Parry, right, joined the Groth winemaking team to help prepare for the retirement of veteran winemaker Michael Weis. In late July, Weis retired and Parry was named director of winegrowing. 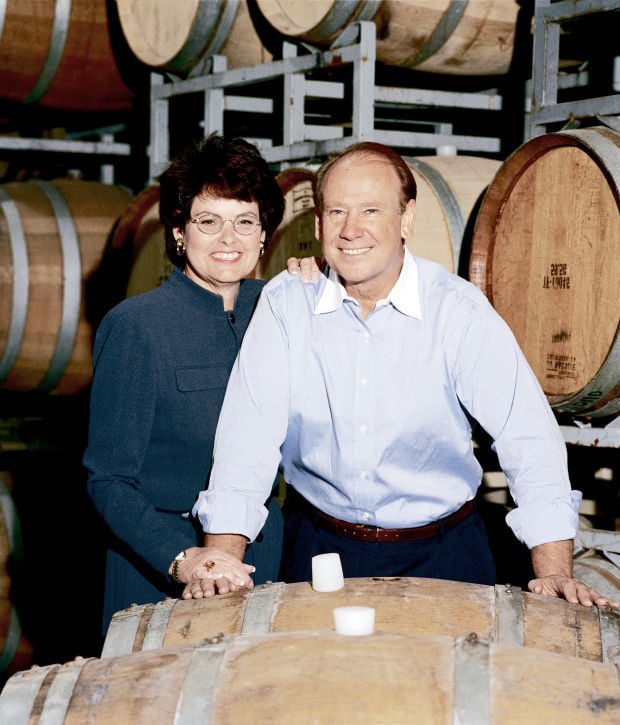 Judy and Dennis Groth founded their winery in 1984.

After two decades as winemaker for Groth Vineyards and Winery, Michael Weis cleared out his office in July and moved down the hall to a desk next to the new kid on the block.

That “new kid” is Cameron Parry, a veteran Napa Valley winemaker who was recently hired by Groth to succeed Weis when he eventually retires in the next couple of years. Weis decided that the short move to tighter office quarters was an important part of the winery’s plan to smoothly hand off Groth’s winemaking duties to the next generation.

“Michael had kind of a unique idea on how he should learn to work with Cameron,” said Judy Groth, who in 1982 founded the Oakville winery with her husband, Dennis Groth. “Now they both work in the same office side by side so it’s very easy communication. I feel kind of sorry for Cameron, though, because Michael is not too tidy.”

According to Dennis Groth, this “slow and steady” transition between winemakers is aimed at ensuring continuity in both the Groth product as well as its management style.

“You know we’ve been in business 32 years now,” Dennis said, “and you develop a way you like to make wine and the way you like your wines to taste. We thought a smooth transition like this would make a lot more sense than Michael telling me someday he’s gone, find a new one (winemaker).”

Weis led the search for his successor after he was charged with developing a strategy to take the family-owned winery into the next generation. Groth’s management team has changed little in the winery’s 32-year history, Dennis said.

“We were sitting in a staff meeting,” he said, “and Carl Ebbeson, who is our controller, said ‘Well there are four out of seven people in this room that are on Medicare (including Weis).’ I said, ‘You know, we ought to talk about succession plans.’ So I told Mike to give me a succession plan; that’s your big project.”

“This is only our third winemaker decision in our 33 harvests here,” said Suzanne Groth, who joined her parents in the family business in 1998. She now serves as vice president of sales and marketing.

Weis joined Groth in 1994 after working 20 years in the wine industry. He earned a masters degree in microbiology from UC Berkeley, then studied winemaking at UC Davis before being hired by Robert Mondavi winery in 1973. Later he relocated to Los Angeles where he worked as winemaker for nine years at the historic San Antonio Winery.

After returning to Napa Valley in the mid-1980s, Weis was again hired by Mondavi to run its recently purchased Vichon Winery in Oakville. He held that position until joining Groth. Weis will continue as Groth’s director of winemaking until he officially retires.

“My plan is to be kind of segued out by the time I’m 70, so that would be about three years,” Weis said.

Parry comes to Groth after a 10-year stint as winemaker at Chateau Montelena. Before that he worked for several wine producers in Napa Valley, Sonoma County and Chile. He studied microbiology and biology at New Mexico State University before earning a masters degree in food science/enology at UC Davis.

“Cameron’s got a tremendous amount of experience making great wines,” Weis said. “I’ve learned as much from him about the new stuff as hopefully he will learn from me about the old stuff. The generational difference between winemakers is tremendous as far as the new stuff that they’re learning now over at Davis, new technologies and a lot of new equipment that has been coming out.”

Suzanne said that she is also impressed by Parry’s skills outside the winery.

“I think as a family we need to consciously look to the next generation for having even more connection in the vineyard,” she said. “I’ve heard Cameron say, in just the short amount of time he’s been here, that ‘If you want to find me I’m going to be out in the vineyard because 90 percent of what goes into the bottle is going to be there.’ So we’re already seeing that Cameron’s boots-on-the-ground experience is going to be really valuable to us.”

“The concept of the transition,” Weis added, “is that eventually Cameron will be Director of Wine Growing which will then encompass our vineyard, outside growers, production and maintenance. The whole nut, so to speak.”

“My epiphany wine was cabernet sauvignon,” Dennis Groth said. “I remember that I first experienced great wine at an event where we drank the 1968 BV Georges de Latour. It was a great vintage and a great wine and I said ‘Wow!’”

That love of cabernet led the Groths to the Napa Valley in 1981 when Dennis was executive vice president of Atari. The couple was seriously considering buying a vineyard property called Les Pierres west of Sonoma when they got a call from Napa realtor Ren Harris, who urged them to visit Oakville before making a decision.

“We came over to Napa Valley and we looked at this property,” Dennis said. “One of the things we said was that we always wanted to own a property that could grow cabernet sauvignon and we couldn’t do that at Les Pierres. We always wanted to make a great cabernet.”

Though less than a third of the 121-acre vineyard was then planted to cabernet, the Groths were encouraged by Oakville’s demonstrated potential for great cabernet sauvignon. The couple bought the vineyard and, in 1982, purchased the Oak Knoll property. After Atari sold in 1984, the Groth family moved from the south Bay Area to Oakville.

Within a few years the Groth’s hunch about the Oakville vineyard’s cabernet potential paid off. Robert Parker awarded 100 points to the Groth 1985 Reserve Cabernet Sauvignon, the first California wine ever to earn a perfect score by the renowned wine critic.

When Weis came on as winemaker in 1994, he worked to build on the early successes at Groth by replanting blocks and improving vineyard practices. Starting in 1999, 54 acres of cabernet was replanted at the Oakville estate. In 2007, the Groths completed a two-year major expansion project at the winery.

Weis said that the quality of the fruit from Groth’s estate vineyards and contract growers — all located within two miles of the Oakville winery — has allowed a more gentle, hands-off approach to his winemaking.

“There’s only been one vintage that I’ve worked with here where we had to fine (filter) the wine, because usually the wines, if we can get them right, are very soft, very lush, good tannin, good structure. It’s just a really unique place, here. Very solid.”

This light touch in the winery aligns with Parry’s philosophy.

“Tools are just that, they’re tools,” Parry said, referring to the growing sophistication of winemaking technology. “It all starts in the vineyard. That’s as good as it’s going to get…what you can grow out there. My job here in the winery – really all of our jobs here in the winery – is just to hold on to that quality. We can use those (winemaking) tools, carefully, conservatively to kind of nudge things and shape things a little bit. But really, if it’s not out there, there’s nothing we can do here that’s going to make it any better.”

Weis said that during his career he has seen the role of winemaker change, particularly in the higher-end, fine wine arena.

“When I first started in the business,” he said, “the mindset was like the winemaker had the magic wand. He could make the silk purse out of the sow’s ear. Then there was a big shift about 20 years after that where (the industry realized) ‘OK, wait a minute. If we bring in crappy grapes we’re going to make good wine. But if we want to make really great wine we have to bring in really great grapes.”

“You get into the ‘90s,” Parry adds, “and you start to see the rise in the cult wines … the tiny producers who developed a lot of techniques and focus on vineyards and (fruit) quality. They could (do that) because they were tiny and it was easy to have a lot of touch. What you see in the 2000s is that a lot of those cult techniques and mentalities move out of just the small wineries and are more broadly applied across the industry.”

Dennis Groth sees the quality aspect of Napa Valley wines continuing to grow with each harvest. Likewise, he and his family are looking to Parry and others at the winery to continue to push Groth wines to even higher levels.

“In the long haul, if you’re going to make wine in Napa Valley, quality is important and we (wine producers) are just advancing the whole quality spectrum immensely,” Dennis said. “I think we just really learned how to make the great wines that Napa Valley is capable of doing.”

At the heart of the Oakville estate is the striking, mission-style winery.

In 2014, winemaker Cameron Parry, right, joined the Groth winemaking team to help prepare for the retirement of veteran winemaker Michael Weis. In late July, Weis retired and Parry was named director of winegrowing.

Judy and Dennis Groth founded their winery in 1984.