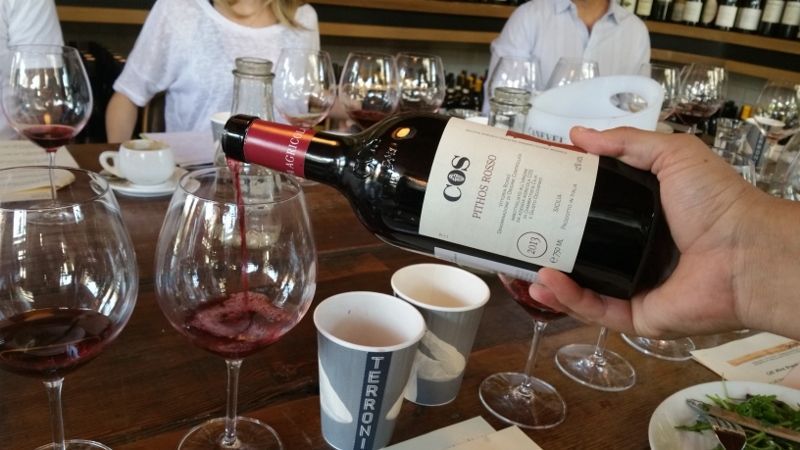 COS winery is named for the three young winemakers who started it in 1980 in Sicily. 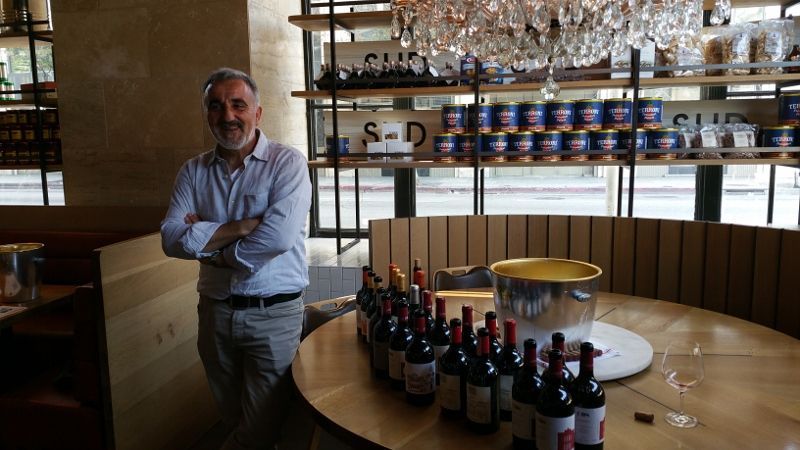 Giusto Occhipinti uses biodynamic methods to make his COS wines.

The term “natural wine” can conjure up many strong reactions, and many of them are not positive. While natural wines can show the diverse personality of a wine, others think of natural wines as full of faults or an excuse for poor winemaking.

It is time to stop thinking about natural wine as the “sulfite-free” wines sold at Trader Joe’s. While there is no certification or accreditation to qualify natural wine, it is about encouraging a return to the vineyard and away from processing and manipulation.

COS winery in Sicily is a producer of natural wines, but they did not begin out that way. COS was started by three school friends, Giambattista Cilia (C), Giusto Occhipinti (O) and Cirino Strano (S). When they began in 1980, they wanted to make wine for their own enjoyment. They became the youngest winemakers in Italy when they bought Joseph Cilia’s old family winery. But, they also continued their university studies between 1983 and 1985, at which point Cirino Strano decided to become a doctor and left the wine business.

COS continued to grow, and over time Giusto and Giambattista began to adopt principles of biodynamic culture. Their philosophy continued to evolve as they began to focus on making natural wines.

“First and foremost, we were interested in understanding the minerality of the soils and its influence on the vine,” Giusto Occhipinti explained. Natural wine expresses a piece of land and, therefore, does not use fertilizers because it changes the parameter of the land. Giusto continued, “To depend only on the vine can be dangerous, as it changes often, but not the soil.”

The soil in Sicily is varied. With present-day agriculture dating back 3,000 years, Sicily is the largest island in the Mediterranean. The influences of the Greeks, French, Arabic and Spanish have all left their mark over the years. While you cross the island in two hours by car, Sicily is like a small continent with three diverse climates. The diversity results in a range of 100 days for harvest with the Western part being harvested in early August and the Eastern part being harvested in November. There are 80 indigenous varieties and 70 percent of the grapes are cultivated in the hills. The Western part of Sicily produces primarily white wines, and the Eastern part produces more red wine.

COS is located on the crest of one of the five mountain ranges in Sicily in Southern Vittoria, which is located at the same latitude as Tunisia. Cerasuolo di Vittoria became a DOC in 1974, and was granted DOCG status in 2005, making it the only DOCG in Sicily. A hot climate with a good breeze and diurnal shift, it is not uncommon to think of the wines, especially the indigenous Nero d’Avola, as fat, extracted and concentrated with high alcohol. But at COS, their wines naturally hit 12 percent alcohol and do not have an intense color like other Nero d’Avolas.

COS began making white wine in 1991, vinifying it like red wine by leaving it on the skins for 10 days to eight months, resulting in orange wines. Grapes spending time on skins is more about infusion than maceration.

COS is more interested in how you achieve a wine than the result. The wines define where they come from and represent the diversity in the area. After all the hard work in the vineyards, the process of winemaking seemed overpowering the grapes.

They felt that the use of oak became too dominant over the delicate wines so they shifted to amphora, the clay jars that the ancient Greeks used. Amphora allows the wine to breathe as it does in oak but without influencing the wine. There are no modifications or manipulations made in the winery. There is spontaneous fermentation from native yeasts, and the wines are bottled without added sulfur.

As natural wines, COS wines embody the place where they are from and as such, will vary from year to year. Giusto Occhipinti summarizes it perfectly: “Wine is like a diary of the year.”

The wines of COS

Where in California do you “wear both sunscreen and a jacket in June” asked Ted Glennon, former sommelier, current winemaker, and spokesperson…

How to make your sponges last longer

How to make your sponges last longer

WHO experts answer questions on monkeypox

WHO experts answer questions on monkeypox

How to cook safe at your summer BBQ

How to cook safe at your summer BBQ

COS winery is named for the three young winemakers who started it in 1980 in Sicily.

Giusto Occhipinti uses biodynamic methods to make his COS wines.