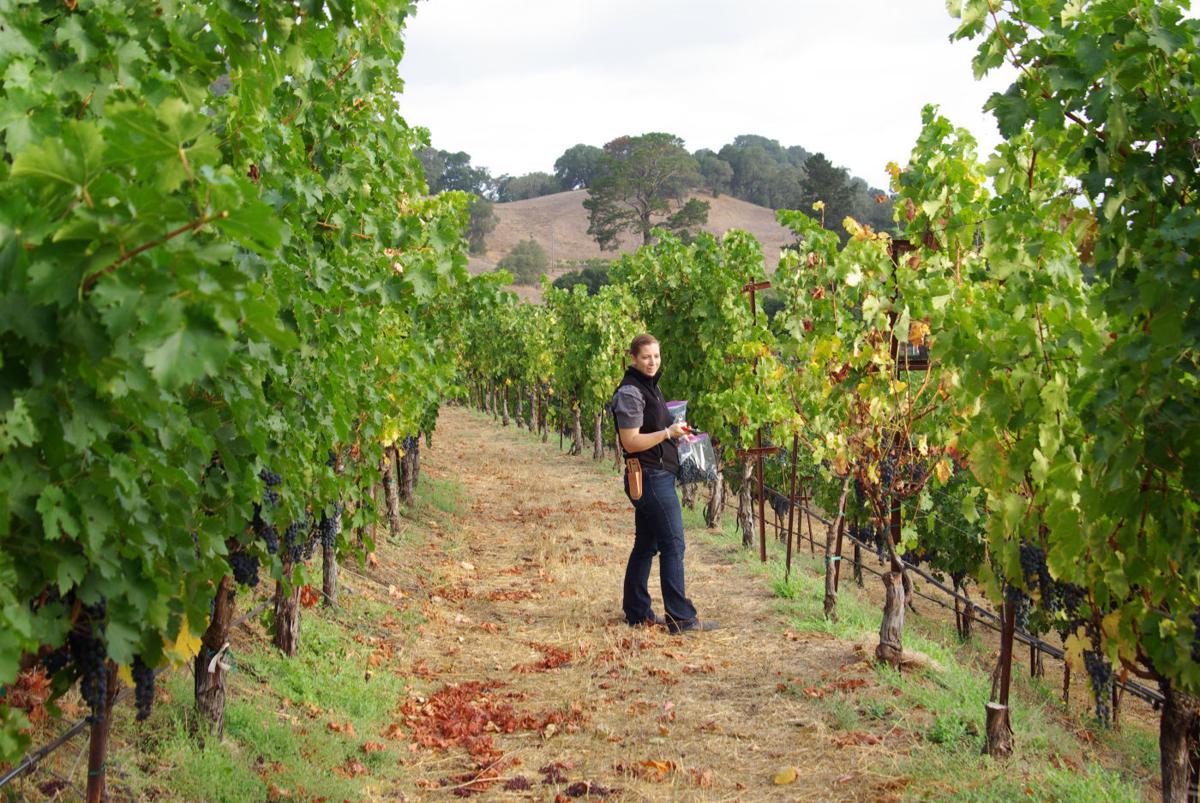 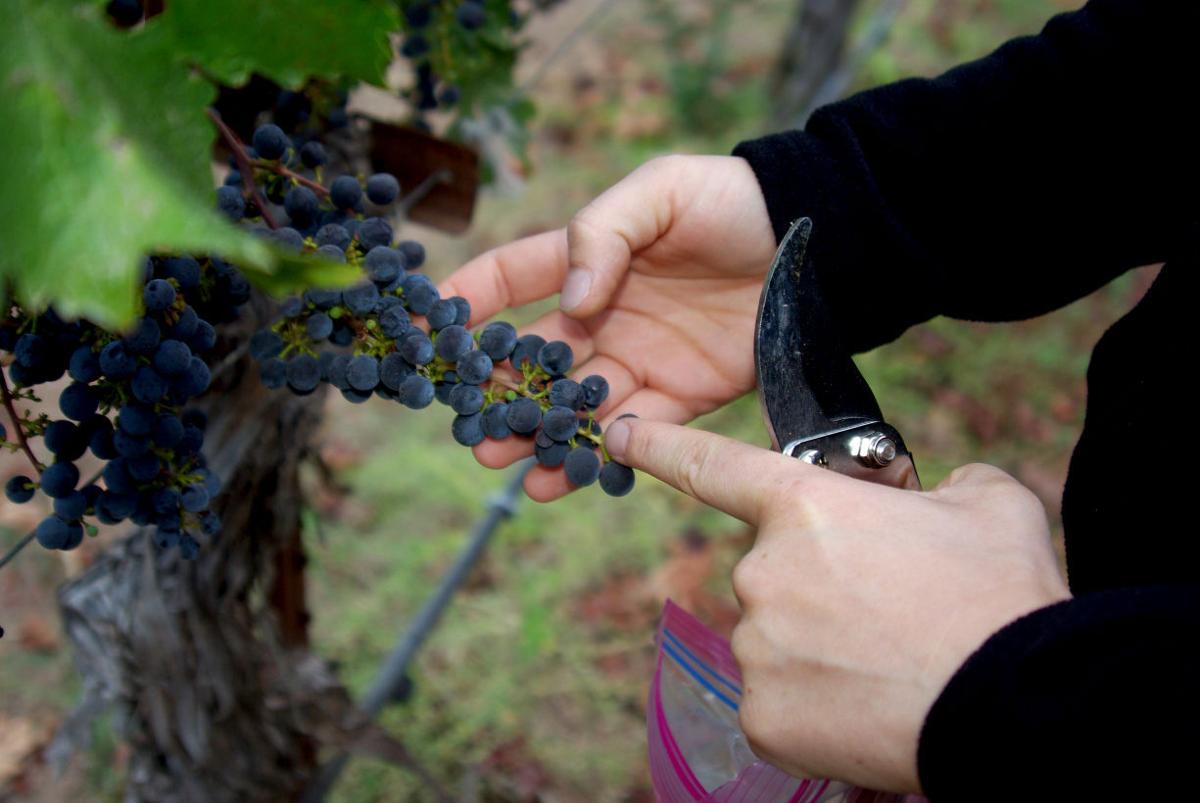 Bella Union winemaker Megan Melief checks the condition of the grapes prior to harvest. 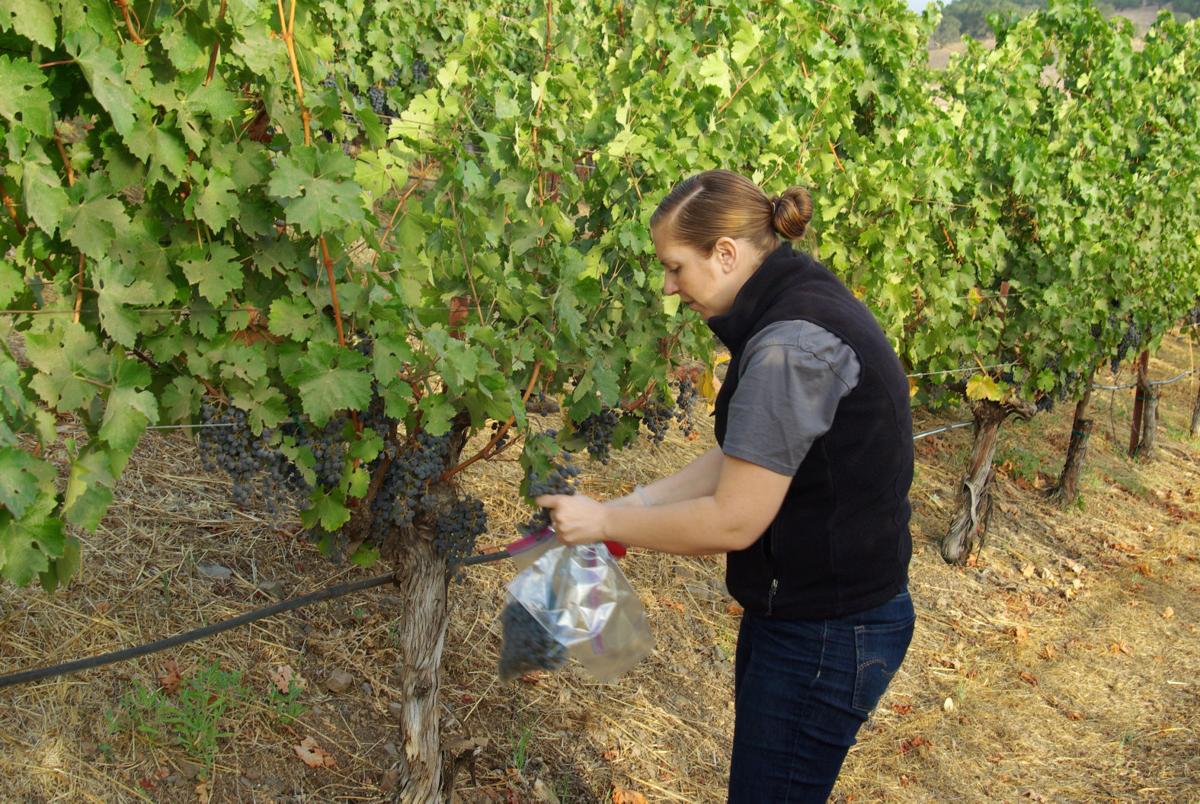 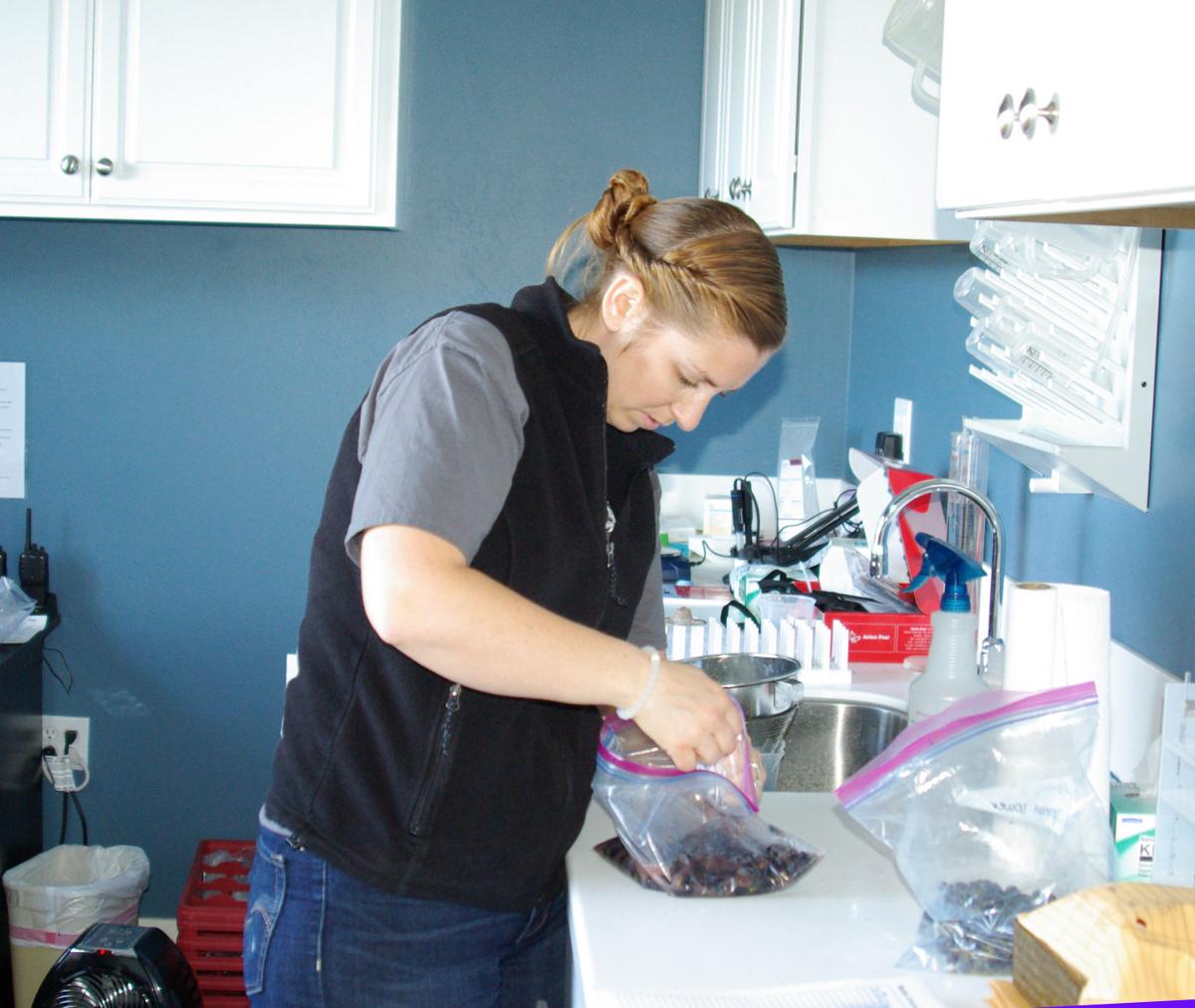 Back in the Bella Oaks lab, Melief measures the Brix, or sugar levels, of the grapes. 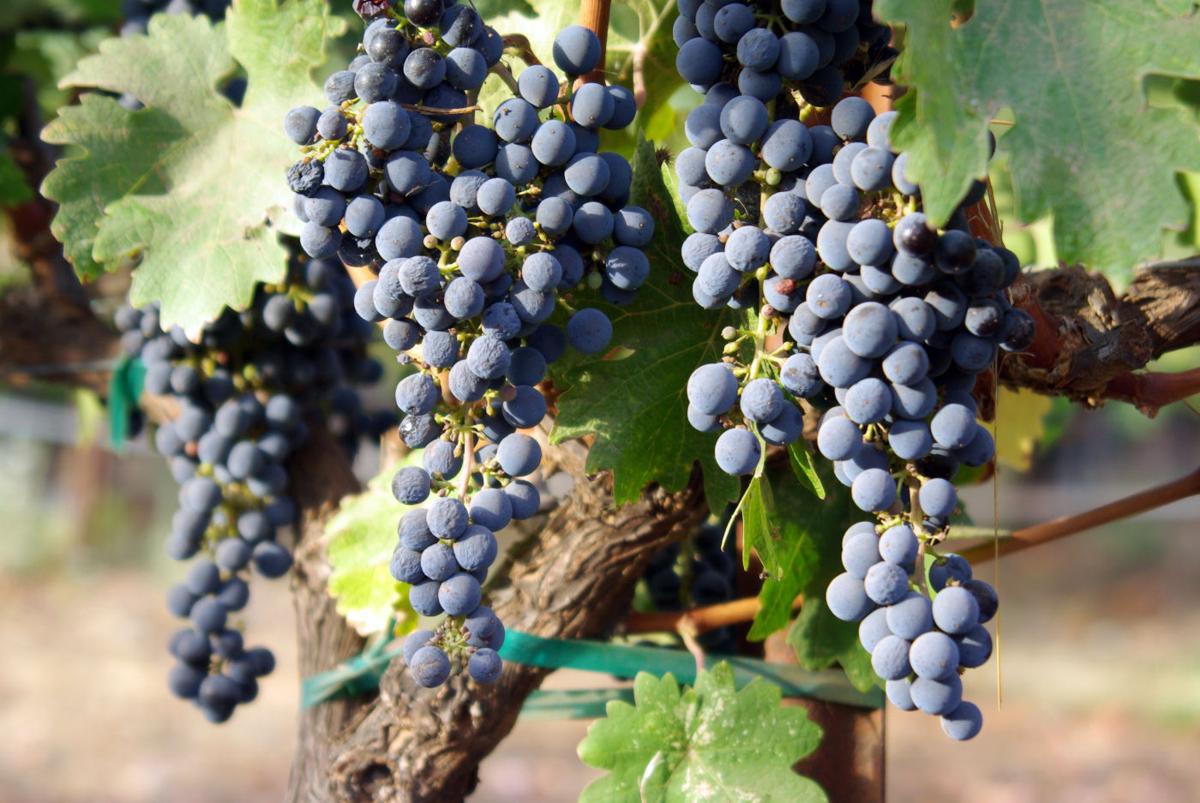 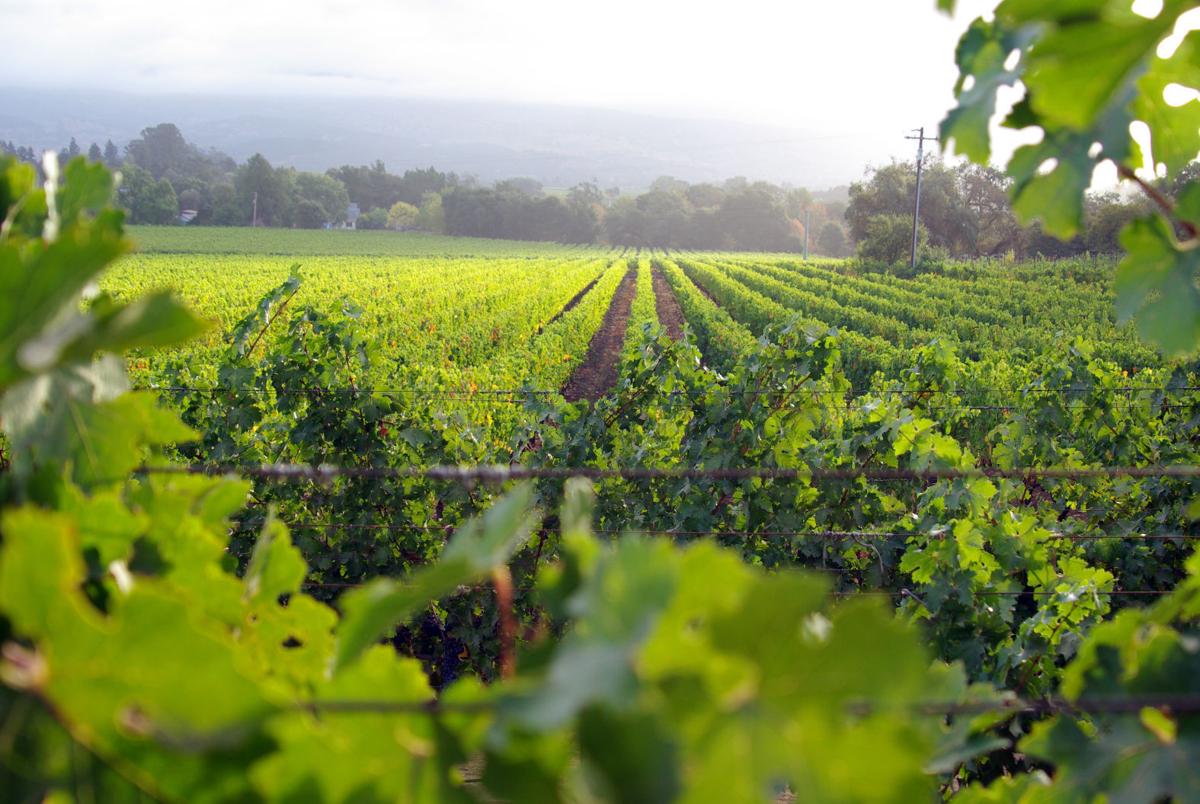 Arriving at 7 a.m. on a recent foggy Coombsville morning, I met up with Megan Melief, winemaker for the relatively new Bella Union Winery.

Bella Union Winery is owned by the partners of Far Niente and dedicated to the “Art of the Blend.” Whereas Far Niente produces stellar estate cabernets, and sister winery Nickel & Nickel produces fine single vineyard Napa cabernets, Bella Union is sourcing grapes from different sites in Napa Valley to make a distinctive blend.

Winemaker Melief needs to get out into the vineyards at least twice a week beginning each August to ascertain if and when the grapes are ready for harvest. This means traversing Napa Valley. “It’s a lot of driving,” she said with a smile.

That morning under a peaceful, spongy sky, I met the young winemaker at the Sproul Vineyard just off of Third Avenue in Napa, in the east valley Coombsville area.

I was going to observe what a winemaker actually does prior to harvest.

Melief was taking cluster samples, whole clusters of grapes from a random selection of vines. The clusters are chosen to provide an average of acids and Brix (sugar levels) in a given block of vineyard.

She walked around purposefully, looking up and down rows, choosing some clusters in front, and others in the middle of the thriving vines. She picked some clusters along the beginning of rows and selected grapes from rows farther back.

Everything went into a regular gallon plastic freezer bag for safekeeping. Later, she would take the cluster bag back to the winery for preliminary testing and then send the samples out to a lab for further analysis.

Melief constantly tasted the grapes. “The reality is, no matter how great the numbers are, if it doesn’t taste good, you can’t pick it,” she said. To me, almost all the grapes I sampled taste good and sweet, but after a while even I could notice slight differences.

The grapes in the Sproul Vineyard looked smaller than normal. Melief concurred and speculated that the drought may be a factor. “You can irrigate to a point, you’ll never be able to catch up,” she said. Nonetheless, she was still pleased with the grapes’ flavors, and predicted that this vineyard would need to be harvested soon.

We next drove northwest to the Bella Union’s Oak Knoll vineyard at the end of Darms Lane. The sun had broken out and it was a turning out to be a pretty morning. This vineyard looked more vigorous than the Coombsville one, yet some of the leaves were already beginning to turn yellow. Melief mentioned that this isn’t unusual during the pre-harvest period, but it means harvest is pretty near.

I wondered why winemakers and vineyard workers are out so early in the morning. It turns out to be a simple, practical reason. The grapes get hot and so do the people. I learned that it’s best to be finished with vineyard work by 11 a.m. at the very latest.

I followed Melief as she went up and down the four separate blocks of the Oak Knoll vineyard. There was a slight elevation at the upper block, rising to about 200 feet, with scores of old oak trees higher up beyond the vineyards. She sampled grapes from the upper, middle and lower blocks. She said, “When I get over 24.5 Brix I worry about acids and flavors.”

Like many winemakers, Melief’s path to winemaker was far from linear. In 2005, she graduated from UC Berkeley with a degree in molecular and cell biology. Then, despite getting a Masters of Pharmacology degree from the University of Washington, the call of wine became her passion. She worked in Washington wineries, then moved back to California. She eventually found her way to the Far Niente, and then began crafting here first vintage of Bella Union Cabernet oi 2012. She was named winemaker of Bella Union winery in 2014.

We then drove up to the Calistoga vineyard, just off of the Silverado Trail and Lincoln Boulevard. Melief was not satisfied with these grapes. “The acids are still too high. It’s not ready, the flavors haven’t developed yet,” she said.

I sampled some grapes and agreed, finding these grapes OK, but with still pale flavors, unlike those of the other grapes I sampled that morning. She predicted that harvest date for this vineyard would be two weeks or more away. For this company like many others, harvest isn’t simply a matter of picking the grapes at the right time. Important scheduling decisions must be considered such as the availability of manpower, crush pads, tanks and storage. It’s a logistical juggling act which can get complicated. Yet it’s all part of the wine business.

Back at the humble Bella Union lab, Melief squished each cluster bag and poured juice into test tubes. Her science background certainly helps her methodically test each sample. She measured the Brix from the various vineyards and recorded more than a two degree difference between some of the vineyard blocks. The test tubes would be sent to a lab in St. Helena for further study.

“You can plan it, “said Melief, “but you never know what’s going to happen. You have to constantly make adjustments. You need to be open and flexible and expect the unexpected.”

Located on Bella Oaks Lane in Rutherford, Bella Union produces a fine blended Napa cabernet. The name Bella Union is an homage to the Bella Union Mining Company that used Bella Oaks lane, known then as the Bella Union Roadway back in the 1880s. The road connected the mercury mine in the Mayacamas Mountains with points to the south. This 25-acre, state-of-the-art winery is the latest feather in the cap of the Far Niente family of wines.

Bob Ecker is a wine writer living in Napa.

Dan Berger On Wine: Many Infinities

Dan Berger writes an introduction to wine diversity for the Chardonnay-weary.

The 27th annual Music Festival for Brain Health will combine live and virtual events this year.

The wines of the Devil's Cellar -- Casillero del Diablo in Chile

Chile may be a half-world away from Northern California but they share winemaking traditions that go back centuries, as well as one enterprisi…

Dan Berger On Wine: We're having a heat wave

The heat dome that hit Washington and Oregon is harbinger of the impact of global climate change, giving the wine industry a warning shot and a chance to assess what winegrowers face down the road, said environmental scientist Greg V. Jones.

The Wine Press: A trio of wine tastings in Napa

One Attitude-Adjusting Day In the Napa Valley: 2021

If you had just one day in Napa Valley, there are hundreds of options, but these three visits put a group of three in a thankful, and even joyful, frame of mind.

While the concept of natural wine is not new, it remains one of the least understood categories by the consumer

Bella Union winemaker Megan Melief checks the condition of the grapes prior to harvest.

Back in the Bella Oaks lab, Melief measures the Brix, or sugar levels, of the grapes.