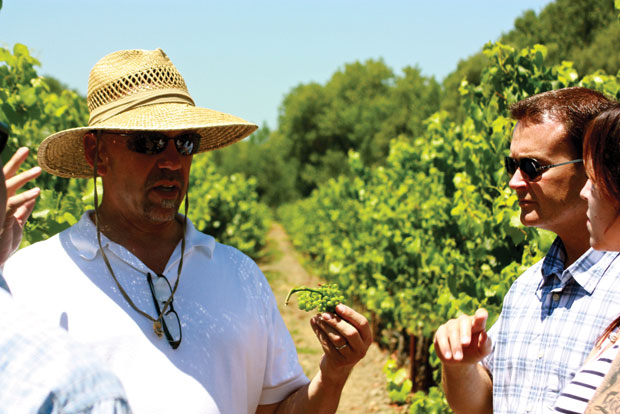 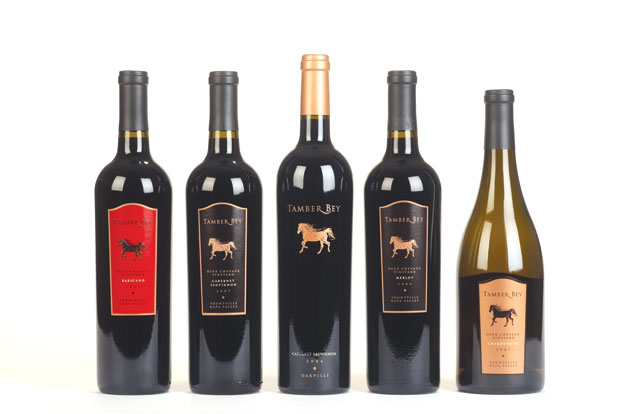 For a substantial chunk of his business career, Barry Waitte “played with the big boys” in the worlds of high technology and venture capital.

When he wasn’t moving money around or investigating a tech breakthrough, Waitte and his fianceé — now wife — Jennifer, spent days on the backs of Arabian horses, taking part in single day endurance races that stretched for either 50 or 100 miles.

But the lure of the grapevine got to Waitte, and he decided he’d rather grow grapes than pound stakes in high finance.

Not only was he familiar with Napa Valley but he felt Napa was the best place to make the type of wine he likes to drink.

“My parents used to vacation in St. Helena ... I’ve been coming here since I was 2 years old,” he recalled over a glass of a lush merlot enjoyed on the veranda of his Yountville wine estate.

“I love wine,” Waitte said, “and I looked into all aspects of the business before I chose the role of a grower.”

Just about a dozen years ago, Waitte purchased a choice 60-acre vineyard at the northern end of the Yountville appellation, containing cabernet sauvignon, merlot and smaller tracts of red Bordeaux varieties. When he brought a couple of horses to the property, he named the property Deux Chevaux.

Within months, he learned another nearby property was on the market. This one at the southern boundary of the Oakville appellation,

17 acres on Yount Mill Road, had a mix of established vines. This property became the winery’s namesake Tamber Bey Estate, which combined the names of the first Arabian horses that Waitte owned and raced. On this relatively cool climate property, Waitte planted a number of choice cabernet sauvignon clones,

By the end of the following year, Waitte decided he wanted to do more than sell grapes to others. He figured he could do that and also make some of his own wine. To that end, he asked respected valley winemaker Thomas Brown to help him realize his new winemaking goal.

The Deux Chevaux property needed to be replanted, Waitte noted, but he kept about 2.5 acres of the Dijon clone chardonnay. “Those vines are 30 years old now,” Waitte reveals, “and they consistently produce top fruit. We released our first chardonnay from the 2001 harvest and we’ve gotten anywhere between 250 and 600 cases of exceptional chardonnay from Deux Chevaux every year.”

In the fall of 2003, Tamber Bey entered the market with 50 cases each of 2001 chardonnay, merlot and a cabernet sauvignon blend from Deux Chevaux Vineyard.

“Within weeks, the majority of the production was delivered, primarily to a select list of friends and family, and the entire inventory was sold by the end of the year,” Waitte said.

Since that time, the Tamber Bey portfolio has grown to eight wines with production this year expected to top out at 6,500 cases.

Waitte loves Bordeaux blends. The three produced at present are based on cabernet sauvignon (Rabicano), petit verdot (Tovero) and cabernet franc (Sabino) – the names all horses’ color coat patterns — with one to come focusing primarily on merlot.

Also, the current harvest will bring two more wines to the portfolio — a pinot noir made from purchased Sonoma fruit and a sauvignon blanc from an Oakville grower.

Tamber Bey has four newly planted acres of vines maturing this year, with Waitte planting another four acres once harvest is over.

All of this activity is what attracted well known France-born winemaker/viticulturist Frederic Delivert to join the Tamber Bey team. While Brown will continue to consult on the project, the day-to-day winemaking program will be overseen by Delivert. Tamber Bey’s winemaking efforts are about to expand and the new winemaker is looking forward to building a new winery in future years for the venture.

“I am open to trying new things,” Delivert observed. “I was attracted to this project because of the number of varietals I will work with. I like blending and this is the perfect place to do that.” Waitte intends to add a chardonnay fermented in stainless steel tanks that will not spend any time in wood. That will be Delivert’s first new project.

Waitte said he does not want to grow beyond 10,000 cases — and that growth won’t occur for at least five years, he says.

He’s happy at the moment because “we sell out every year. We have a tasting room in St. Helena and I have to limit sales so we have enough wine for it.”

Tamber Bey distributes only two of its wines in 20 states. “That’s because only two of our wines are more than 1,000 cases — the rest are under 500,” the vintner adds. He notes that 75 percent of Tamber Bey wines are sold to individuals, with 50 percent alone coming through the company’s Eqqwine Club.

Waitte met his wife, Jennifer, when he purchased a horse from her. One of the best endurance riders in the country, she was a member of the United States World Cup team. The couple has four Arabian performance race horses on their wine estate and continue to take part in endurance races in California and elsewhere.

A collective of family wineries has come together to form Mia Carta tasting room in downtown Napa.

Gretchen and Brian Brakesman talk about the founding of their Red Thread winery in Napa Valley.

Dan Berger On Wine: How sweet it is

Sugar sells, writes Dan Berger, and this is leading to a widespread use of sugar in wines that once were dry, but which now aren’t? What can you do? One idea he suggests is try Cabernet Franc.

Lang & Reed: From Franc to Blanc

June 19 is Drink Chenin Blanc Day, writes Allison Levine -- not that anyone needs the excuse of one day to drink it.

Allen R. Balik, The Wine Exchange: Must we taste like a pro?

Wine tasting is both simple and highly complex. How do you go about getting the most out of a glass of wine?