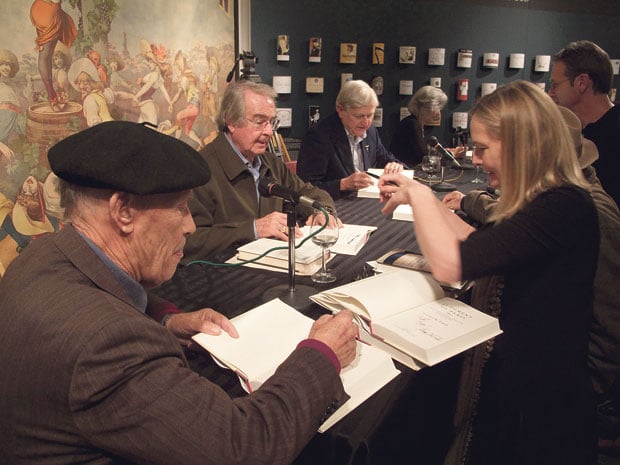 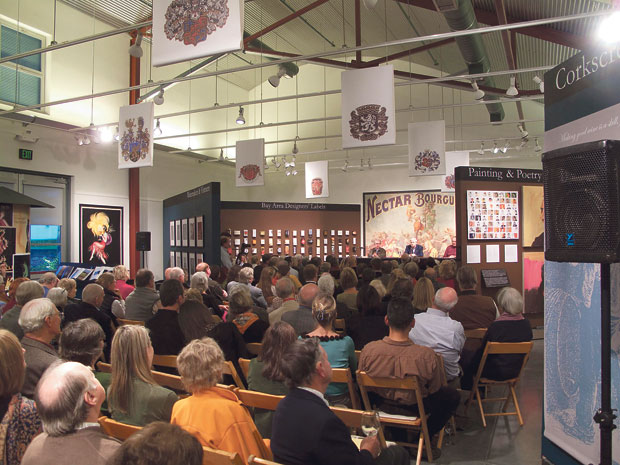 More than 180 people gathered at the Napa Valley Museum to listen to the story that helped define the country’s history with wine. 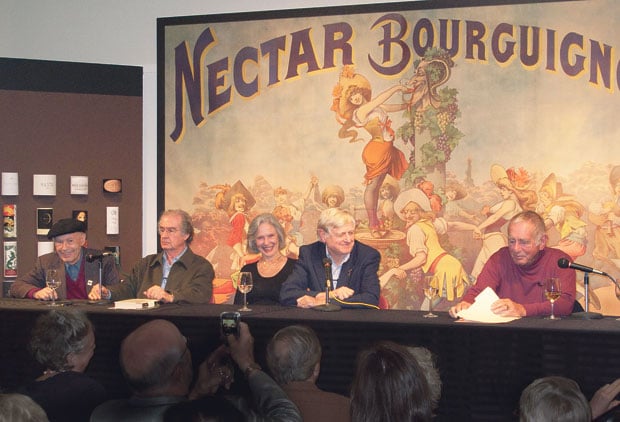 Five of the six people most responsible for a defining event in the history of the Napa Valley wine industry retold the story to a packed house recently at the Napa Valley Museum in Yountville.

“The Judgment of Paris Revisited” celebrated the historic 1976 Paris wine competition that mortified the French, surprised international wine enthusiasts and vaulted Napa Valley wine into the international wine spotlight. The tasting event has been heralded as a critical turning point for the California fine wine industry, which, at the time, lacked credibility and awareness in the “serious” wine industry.

More than 180 people relived the tale as the museum brought in George Taber who, in 1976, was the only reporter covering the Paris tasting.

Taber was joined for a panel discussion by Warren Winiarski, who made the 1973 Stag’s Leap cabernet sauvignon that won the red wine part of the competition, and Jim Barrett, owner of Chateau Montelena, whose 1973 chardonnay won the white category. Joining the panel later were winemaker Mike Grgich, who crafted the winning chardonnay, and Joanne DePuy, who was critical in transporting the California wines to Paris in 1976. Each of the five played a key role in the historic tasting that was staged by Steven Spurrier, a Paris-based British wine merchant. Spurrier was unable to attend the museum event.

Taber also wrote a book on the subject in 2005 titled “Judgment of Paris: California vs. France and the Historic Paris Tasting that Revolutionized Wine.”

The competition pitted six California cabernet sauvignon wines against four French Bordeaux wines and six California chardonnays against four chardonnays from the French Burgundy region. All but two of the 11 judges were respected French wine experts who judged the wines in a blind tasting. To the surprise of the judges, and Spurrier himself, the Stag’s Leap cabernet and Chateau Montelena chardonnay significantly outscored the pedigreed French equivalents.

As significant as it became, Taber said the event started as a simple publicity stunt conceived by Spurrier to promote his wine shop in Paris.

“He had also started the very first wine school in Paris,” he said, referring to the Académie du Vin. “The French had never had a wine school before Steven Spurrier started one. He was trying to promote his two businesses … the shop and the wine school.”

The event was suggested to Spurrier by Patricia Gallagher, an American who was serving as director of the Académie du Vin.

“They had been hearing from visiting Americans that there were some interesting things going on in California,” he explained. “ She said (to Spurrier) that maybe (he) should have a tasting to show the French what the Californians are doing.”

One of those visiting Americans was San Francisco-based wine critic Robert Finigan, who in 1975 helped set up tastings for Gallagher with several Napa Valley wineries. Spurrier made the trip later, visiting several wineries anonymously and purchasing wines he liked. Serving as Spurrier’s guide in the Napa Valley was Joanne Dupey, who owned Wine Tours International.

Back in Paris, Spurrier and Gallagher assembled the judging panel and tried to generate media interest in the event. Spurrier was careful to choose only the finest French wines to compete.

The judging panel, too, was a top-notch group selected from French wine nobility. Spurrier and Gallagher were the only non-French judges.

“Nobody has ever challenged him about the quality of the judges,” Taber said.

Meanwhile, there was concern about how to get the American wines into France. Complicated custom regulations at the time made importing wine to France difficult. Coincidentally, at the time DePuy was arranging a trip to France for a delegation of Napa Valley winemakers. Since each tourist to France was allowed to bring in two bottles of wine, DePuy agreed to bring along the two cases of Napa Valley wine with her group of 20.

Spurrier had scheduled the event for May 24 at the Intercontinental Hotel in Paris.

“He was given the room for free if he could get in between lunch and a wedding party that was coming in at 6 o’clock,” Taber said.

Spurrier and Gallagher were having a tough time attracting press to cover the event. In desperation, Gallagher remembered Taber had taken a wine class she had taught a few months earlier. Trading on their acquaintance, she gave him a call and pushed him to attend the tasting. Taber said he was planning to skip the event, seeing it as a “non story.”

“It was the day before my 34th birthday,” he continued. “I was the only journalist who was dumb enough to show up that day. Remember, this was a publicity event. It was obviously not going to be a very interesting story because, clearly, the French were going to win. So why should anyone write a story about French wines defeating California wines in Paris? It’s a dog-bites-man story.”

Being the sole newsman in attendance, Taber was virtually ignored and, therefore, provided “a freedom that would not normally be given to a journalist.”

He was given a list of the competing wines in the order that they would be blind tasted and had access to overhear judges comments and conversations during the evaluation. At one point, Taber’s skepticism about the event’s story potential changed dramatically when he overheard a comment by judge Raymond Oliver who had just sampled a white wine.

“He said in French ‘Ah, back to France’ and I looked down at my list of wines and he had just tasted a Freemark Abbey chardonnay,” Taber beamed. “To me, it was an ‘ah-ha’ moment.”

When Chateau Montelena was announced as the winner of the white category, Taber knew he was on to something. He said the mood among the judges changed dramatically going into the red wine part of the competition.

In the end, however, the judges chose the Stag’s Leap cabernet as the best of the tasting. Following the Napa Valley upstart in second through fourth places were three world-class Bordeaux wines.

Winiarski told the museum gathering that he was in Chicago when his wife, Barbara, called from California to give him news of the victory.

“She said ‘Do you remember Steven Spurrier … he took our wine to Paris for a tasting.’ I said ‘yes’ and she said ‘Well, we won’. I said ‘That’s nice.’”

Winiarski said he felt that his nonchalant response to the news was justified. At the time, he was unaware of who the tasters were or what wines were in the competition.

“Even though it was nice to win a tasting, (at the time) the significance of that tasting was not available to me.”

Barrett was in France visiting a winery with Joanne DePuy’s tour group when he heard of the victory from Taber, calling from Paris for a comment. Realizing that he was in a French chateau, Barrett also kept his response subdued.

“ I said ‘Well, Mr. Taber, all I can say is not bad for kids from the sticks,’” Barrett said. “The next day I sent a telegram back to the winery. I said congratulations to team Montelena and all the people at the winery.”

One of those people was Grgich, who told the museum audience that the victory was a highlight in his long career as a Napa Valley winemaker.

“I very much appreciate the Paris tasting,” Grgich said. “My dream came true.”

“Mike is an extraordinary winemaker,” he said. “I personally owe him a tremendous amount for having made that wine and all of the people who were helping him make that wine.”

Despite the ultimate significance of the event, Taber’s Time magazine story was only four paragraphs long, appearing as the second story in the magazine’s Modern Living section.

“The second story is usually the filler. The first story was about a new theme park in Atlanta,” Taber laughed.

It wasn’t until 20 years later that Taber decided to do a book on the event. He was visiting Napa Valley for a 20th anniversary celebration of the Judgment of Paris.

“In talking with (Napa Valley) winemakers,” he said, “it became clear that this tasting in Paris had been the turning point in the history of California wine. This is what put California on the map.”

For his part, Spurrier paid a price for staging the historic competition.

“Nobody knew who had written the story,” Taber said, “so I had no problem. Steven, on the other hand, was marched out of wineries all over France. There is nobody in the world who loves French wines more than Steven, but he had about 10 years of being in the woodshed before the French would let him out.”

In subsequent years, Taber and the others involved in the Judgment of Paris realized the event’s singular importance in the history of the California wine industry.

“It liberated the aspirations of many winemakers in many places,” Winiarski told the gathering. “It removed the false boundaries that had been set for so long by the French wines.”

Barrett said the victory was a source of pride for the entire Napa Valley winemaking industry.

“We were doing something together … it was really a band of brothers that was making these Napa wines and doing better and better and better. Napa really set the stage that caused winemaking to be changed and globalized all over the world.”

Taber agreed, indicating that the event was a shot heard around the winemaking world.

“The Paris tasting inspired winemakers around the world to say, ‘If these guys from California can do it, we can do it in Australia, New Zealand, Italy and Spain.’ Everybody kind of picked up their game and the globalization of wine we have today really started with the Paris tasting.”

According to Taber, there continues to be interest in the event almost 35 years later. Much of it has to do with the continued growth and sophistication of the American wine consumer.

“The day before the Paris tasting,” Taber said, “California wines were like the Rodney Dangerfield of the world’s wines … they got no respect. After the Paris tasting they suddenly were on the map. Everybody likes that kind of story.”

Dan had gathered affordable wine recommendations from local vendors -- who will deliver it to your door.

Cabernet Sauvignon is hot and getting hotter -- but rarely do current vintages resemble a classic Cab.

Coronavirus closed their tasting rooms. Now they're turning to the virtual sphere.

Tasting rooms are an irreplaceable revenue source for Napa Valley's wineries. Now that they're closed, many are taking their tasting experience online.

Eduardo Dingler, Wine to Sake: A recap of Benvenuto Brunello 2020

The mood was still celebratory when Benvenuto Brunello 2020 took place in February 2020.

The World in a Glass: What's cooking from wineries

Only a small fraction of wine is cellared and aged by relatively few collectors. But the reward of that cellaring can be a warm welcome message to those who enjoy and appreciate the character of a properly aged wine.

More than 180 people gathered at the Napa Valley Museum to listen to the story that helped define the country’s history with wine.