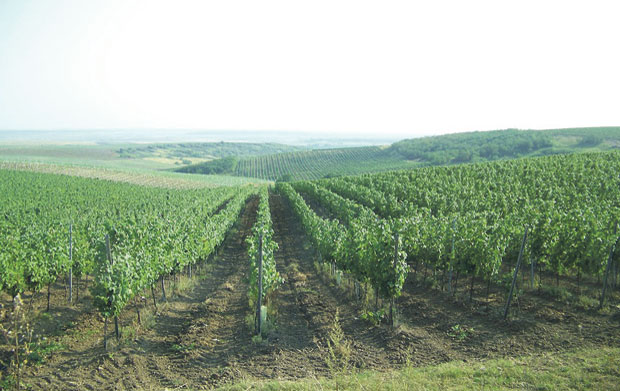 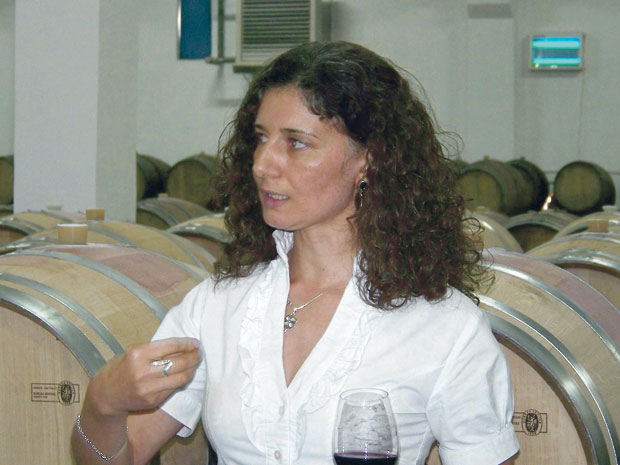 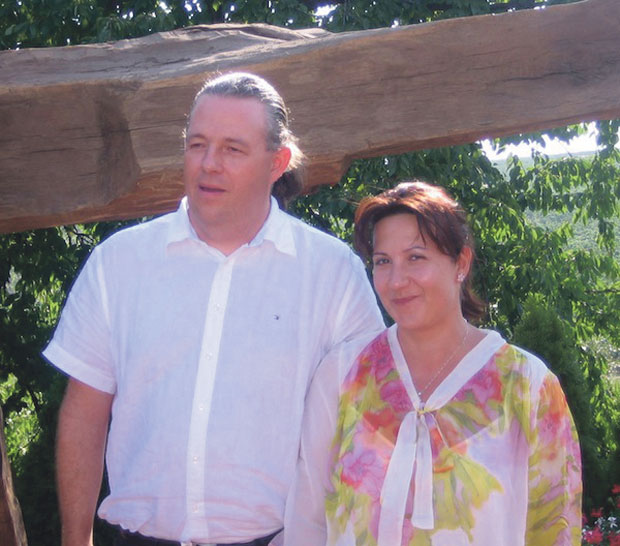 Phillip and Elvira Cox are the owners of Cramale Recas.  Paul Franson photos 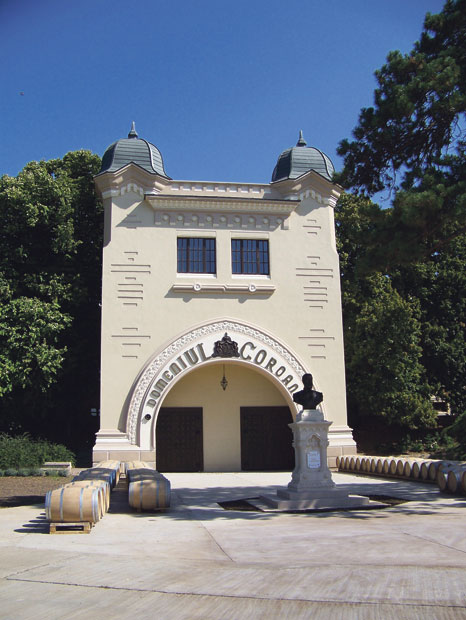 Domeniul Coroanei Segarcea (750 acres) owned by a successful agriculatral businessman who also has almost 70,000 acres of corn, soybeans and other crops). 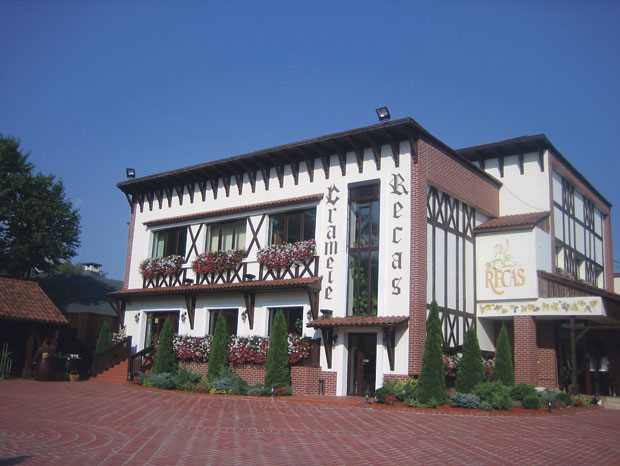 The visitors center at Cramale Recas would be equally at home in Napa Valley. 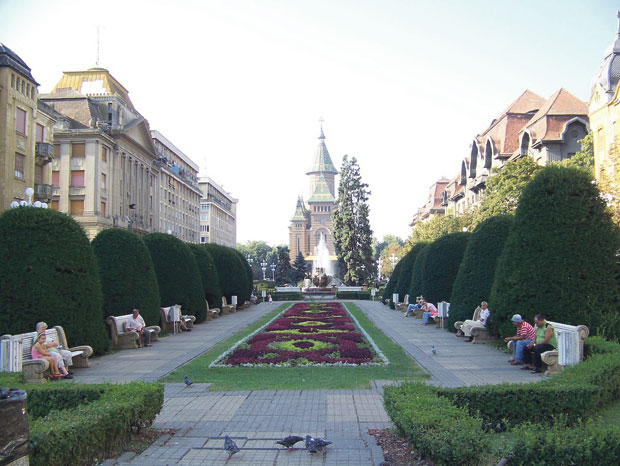 The lovely park in downtown Timisoara leads to the ornate Orthodox cathedral, where the 1989 revolution erupted.

This year, the United States became the largest wine market in the world, and every country that makes wine wants to get its share of it.

One of the latest is Romania. Six of the country’s many wineries have banded together to secure its share of the U.S. market, and they’ve secured $3.5 million from the European Union and the government of Romania to fund the effort.

One part of the marketing effort is an upcoming visit to Napa and San Francisco; another was inviting some writers to visit recently, which I did. As pioneers, we writers did encounter some rough spots, but the visit was interesting, the people friendly and the wines good, if not spectacular.

The effort is not surprising. Romania, with nearly 500,000 acres of vineyards, is the seventh largest wine producer in the EU and in the top 10 worldwide.

Wine has been made in the Balkan country the size of Michigan for millennia; Bacchus was supposedly born in Dacia, as it was once named.

Unfortunately, during Communism and the corrupt and repressive dictatorship of Nicolae Ceausescu, the government forced the collective vineyards to plant high-yielding, low-quality varieties, often in the wrong places and with poor configurations and trellising.

Since the revolution in 1989 — the only bloody one in Eastern Europe (Ceausescu was shot) — the democratic government has sold the vineyards to private companies and individuals, many from outside the country.

These new owners have invested significantly, often with EU help, to replant vineyards and upgrade production facilities. As a result, the vineyards and wineries we visited in mid-August were mostly modern, beautifully tended and spotless with first-rate equipment.

New facilities aren’t enough to overcome outdated winemaking, however, and most of the owners have hired Western consultants — Australians are particularly popular — to improve winemaking and train Romanians to make modern wines.

At least at the six wineries we visited, the vineyards, production and even wines are more New World in character than Old World, within the boundaries of the continental climate.

Romania lies on similar latitudes to Bordeaux, Piedmont and other renowned winemaking regions. Its vineyards are planted in disparate regions, some on flat soil near the Black Sea, others on rolling foothills the impressive Carpathian Mountains inland that bisect the country

It’s hot in much of Romania in the summer, cold in the winter. Its vines receive adequate natural water and aren’t generally irrigated. As a consequence, they have relatively small and balanced canopies without excessive manipulation. Either taste or the weather results in lower sugars and alcohol than common in many New World wines.

Historically, the majority of the wine production was white, but it is now close to 50/50. Likewise, Romanian consumers have preferred sweet wines, but dry wines are becoming more popular and most exports are dry.

Many, perhaps most, recent plantings have been of popular international varieties such as pinot grigio and merlot, which seem to do particularly well, as well as chardonnay, cabernet and syrah.

One of the six wineries in the group attacking the U.S. market, is Murfatlar, which, with 8,200 acres, is the largest in the country.

None of the other five are among the largest, however, and  their progressive outlooks may not be typical. A number had female top winemakers, for example.

The winery group involved in the promotion includes:

•  Domeniul Coroanei Segarcea (750 acres) owned by a successful agriculatral businessman who also has almost 70,000 acres of corn, soybeans and other crops);

• Senator (2,250 acres), whose crew-cut managers and owners have a  Western outlook. It has made Vampire and Werewolf wines.

Most of these companies have some presence in the U.S. market. Twelve percent of Romania’s total exports of 1 million cases valued at $19 million went to the U.S. in 2010, mostly to Romanian communities.

One of the most promising wineries is Cramele Recas, which is introducing new wines, including local feteasca negra and feteasca regala. It’s working with Cameron Hughes Wines to sell its merlot and pinot noir in the Sam’s Club network.

It is also supplying the $4 Unwined line to the Fresh & Easy supermarket chain, and has provided Pinot Evil to the Wine Group. It exports 40 percent of its 1.1-million case production and is the largest exporter in the country.

Recas has invested $21 million in the vineyards since 2001. The winery has just hired its second Australian winemaker; it also has a Spanish winemaker.

Liverpudlian Cox has a simple philosophy.  “We give people what they want,” he said, noting that they had planted a lot of pinot grigio to meet demand.

Carl Reh Winery-Crama Oprisor also just hired an Aussie consultant. It makes about 1.3 million liters per year, and ships 875,000 liters to Germany, most in bulk.

Along with Domeniul Coroanei Segarcea and Senator Wines, Carl Reh has little presence in the U.S. market. All three are seeking importers.

Segarcea has an impressive facility set among vineyards; owner Mihai Anghel and his wife, former cardiologist turned winemaker Cornelia Anghel, seem to be shooting higher in price than most of the other companies visited.

Halewood, which exports much of its production to home base England, and Senator seem knowledgeable about the U.S. market, too.

Murfatlar, by far the largest Romania winery with production of 2.5 million cases, has several U.S. importers. But like all of the Romanian wineries, it is seeking broader distribution in the U.S. It has spent $70 million each on vineyard and cellar improvements, and has both Australian and French consultants.

Most of the producers see their biggest potential in the moderately priced international dry wines that are most popular here, but they also say there’s a market for the unique Romanian varieties.

Few seem interested in exploiting some small but hot markets here with wines in which they historically excel — off-dry white, red, rosé and muscat wines.

The group will have a tasting of Romanian wines for the trade and media Sept. 29 at La Toque. Contact (Ms.) Jordan Robinson at Jordan.robinson@aboutdci.com to attend.

A quick tour of Romania

Romania has a population of 22 million people. It’s surrounded by Hungary, Serbia, Bulgaria, Ukraine and Moldova (which speaks the same Romance language).

The Danube River flows along its border with Bulgaria and across the country, draining into the Black Sea.

The country is cut in two by the Carpathian Mountains; the northwestern part is Transylvania, and there was a real Count Dracula, He’s called Vlad Tepes, Vlad the Impaler, for the technique he learned from the Turks of the Ottoman empire that ruled his land.

Vlad is a hero to Romanians, and his castle is a top tourist attraction, though we didn’t get near it or into the picturesque mountains.

Most of the country we drove through was covered with corn and sunflowers as far as you could see — Kansas without tornadoes.

Bucharest, the capital, is in the southeast though not near the sea. About 10 percent of Romanians live there. It was not badly damaged in World War II, but suffered from heavy-handed Communist redevelopment.

Still there are many attractive areas and an interesting old town filled with restaurants and clubs.

The Black Sea beaches are lovely, too.

The food is mostly a combination of tasty Mediterranean-Middle eastern Turkish, and heavy, middle-European concoctions of pork, cabbage, polenta, potatoes and such. It’s no place for a vegetarian.

The wines we tried (mostly dry ones designed for export) were fine with food, some good on their own. In U.S. markets, they’re typically inexpensive; $8 to $15 or less. The native wines are interesting, but I didn’t taste anything that might become the next big thing — a pinot grigio or malbec. Maybe it’s the complicated names.

Phillip and Elvira Cox are the owners of Cramale Recas.  Paul Franson photos

Domeniul Coroanei Segarcea (750 acres) owned by a successful agriculatral businessman who also has almost 70,000 acres of corn, soybeans and other crops).

The visitors center at Cramale Recas would be equally at home in Napa Valley.

The lovely park in downtown Timisoara leads to the ornate Orthodox cathedral, where the 1989 revolution erupted.