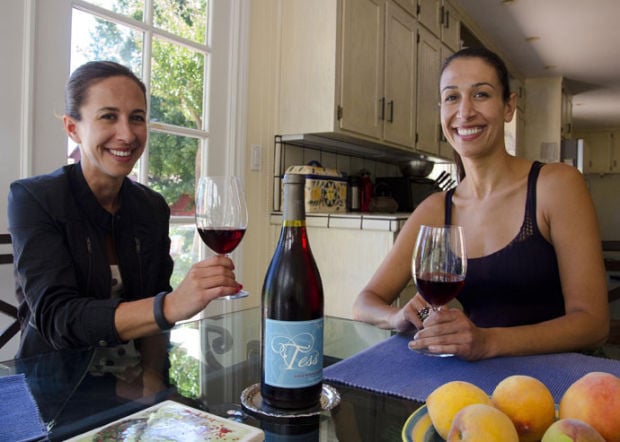 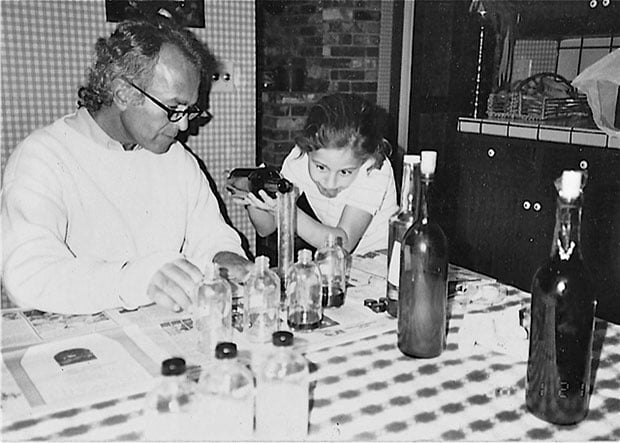 Tony Peju and daughter Ariana at a family blending session in the 1980s. Submitted photo

During the early years of their family’s namesake Rutherford winery, Lisa and Ariana Peju would frequently join their parents at the kitchen table for impromptu wine blending sessions.

The youngsters’ father, Tony, would mix a little of this and a little of that and everyone would have a taste. It was good family fun, the sisters remember, but also productive. One of the blends — a combination of red and white varietal wines — became Peju Provence, a longtime favorite in the winery’s tasting room.

Some three decades later, those kitchen-table blending sessions inspired the Peju girls to launch Tess, a new wine brand targeting the younger, more casual wine consumer. The new label is evidence of the sisters’ growing leadership role in the family winery started by Tony and Herta (H.B.) Peju in 1983.

“It’s great to be able to work together and create something together that is an extension of Peju,” Ariana said, noting that she and sister Lisa are the force behind the Tess project. Though the wine is produced from Peju estate fruit, she said, Tess is being marketed as an independent brand outside of the established Peju wine portfolio.

Like Peju Provence, Tess is a blend of both red and white varietals sourced primarily from Peju’s Tess vineyard in Pope Valley. The new wine’s character, however, is distinctly different than Provence, according to Peju/Tess winemaker Sara Fowler. Tess, she said, is “a bridge wine” that will appeal to both red- and white-wine drinkers.

“It has more tannin structure and has a little more red-wine focus (than Provence),” Fowler said. “We were looking for kind of a white-wine-like red wine — the crisp freshness that we get from a white wine with some of those tannin structures and profiles of red wine.”

The original Tess concept was geared toward female wine drinkers, Fowler said, “knowing that women are the ones that are purchasing more wine. But this is by no means meant for women only. We want men to drink it too, and we think they will like it because of the tannin structure.”

While the label suggests that Tess be served chilled, the wine seems to change character with every degree of temperature change. Served chilled, Tess presents more of a white wine flavor profile and mouth feel. At cellar temperature, the wine reveals more tannin and the bolder flavors characteristic with red wines.

Fowler said the Tess proprietary blend will change from year to year as she aims for a specific flavor profile in the wine.

“We are looking for a something that is easy drinking, enjoyable but a food wine so we really want to make sure that there’s enough acidity in there,” she said.

“It’s probably my most difficult wine to put together because there are so many components and so many aspects,” Fowler said, noting that Tess is one of more than 20 wines she crafts each year.

The popularity of Peju Provence, a refreshing, fruit-forward wine that is usually served chilled. encouraged the sisters to pursue the Tess project, Fowler said. Provence is sold only in the Peju tasting room or on the winery’s website.

“People would ask for Provence out in the (retail) marketplace and we would have to tell them no,” she said. “So we knew that there was already a place for a wine similar to Provence but we didn’t want to make the same wine and send it out. If you taste them (Tess and Provence) side-by-side they are different but they are similar.”

“We want to get across that wine doesn’t have to be pretentious,” she said, “it doesn’t have to be what people say it has to be. We’ll say ‘Go ahead, throw some fruit in it, make it a sangria, make it cold, make it warm, whatever. It can be whatever you want it to be.’”

Tess is being sold in 26 states for $20 per bottle. The wine can also be purchased at the label’s website TessWine.com.

Tess is being sold in 26 states for $20 per bottle. The wine can also be purchased at the label’s website TessWine.com.

Napa's RD Winery has opened their large space to smaller brands who are just beginning and other brands wishing to expand. They call it RD Wine Collective.

PennyWise Episode 40: How to be sure your donation makes an impact

PennyWise Episode 40: How to be sure your donation makes an impact

Revamp your workplace wardrobe with these money saving tips

Revamp your workplace wardrobe with these money saving tips

Gifts for couples who have everything

Gifts for couples who have everything

Tony Peju and daughter Ariana at a family blending session in the 1980s. Submitted photo