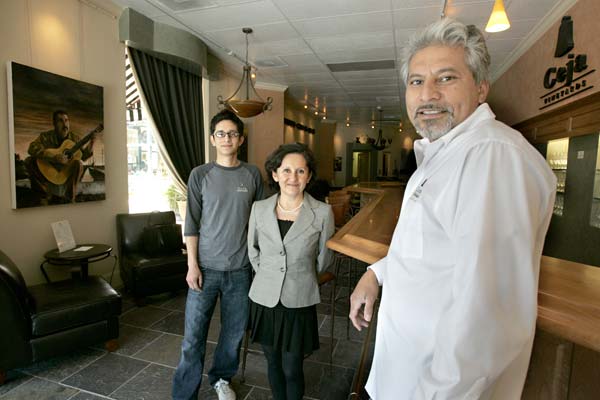 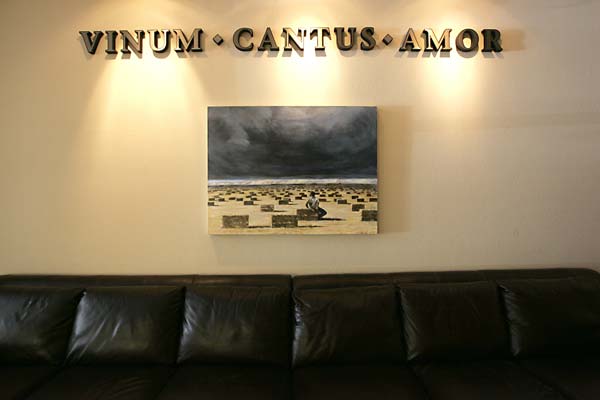 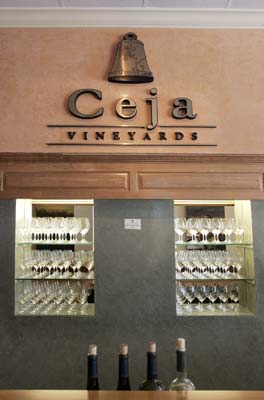 As far as the Cejas are concerned, it’s not only about wine.

Their decision to locate an inviting, elegant tasting salon in downtown Napa came from a desire to provide the community with an opportunity to explore Latin culture through the arts, through cuisine, as well as through the family’s approach to winegrowing.

In fact, it was third generation Ariel Ceja who first alerted his family to the importance of having Ceja Vineyards in on the ground floor of downtown Napa’s renaissance.

He and his parents, Amelia and Pedro, along with Pedro’s brother, Armando and wife, Martha, want to share the hospitality for which they’re widely known with locals and visitors alike in casual comfort along Napa’s main drag.

“We want our friends — and people we hope will become our friends — to have a place where they can have a conversation and not have to shout to be heard,” says Amelia, the diminutive powerhouse who serves as president of the ultra premium Latino family-owned winery she, her husband and in-laws founded a decade ago.

Enjoying a glass  of wine with friends, listening to music, enjoying the handiwork of up-and-coming artists, noshing on cheeses and longaniza — all the while catching up with friends — is what downtown Napa’s newest tasting salon is all about, she says.

Although the new salon was the brainchild of Ariel Ceja, bringing it online proved a collective family effort. Pedro and Armando Ceja’s brother, Nacho, took his siblings’ ideas and ran with them. He converted a former commercial space at First and Randolph streets to its present look — warm terra cotta-colored walls, plaster and molding, complete with cherrywood wine bar, cocktail tables, chocolate leather couch and matching easy chairs. The family has incorporated an imposing statue of Bacchus along with artistic mountings of several grapevines.

“Sparks fly when the (Ceja) brothers get together,” says Amelia Moran Ceja, who was the first Mexican-American woman to serve as president of a wine production company. The Cejas and Morans raised their  families among the vines, she adds. In fact, Amelia first met her husband, Pedro, when both worked a harvest here in the ’60s.

Their parents settled in the Napa Valley with respective families more than four decades ago, after both breadwinners had experience in the U.S. as part of bracero and other farmworker programs.

Armando Ceja launched his winegrowing career at age 7 and he made his first wine at 18. His formal viticultural and enological studies took place at UC Davis. He worked in Napa and Sonoma vineyards for nearly two decades before the Ceja family planted its own vineyards in the early ’80s. Today, they own five vineyards, four in Carneros and one in Petaluma. They also harvest the fruit from a leased vineyard in northeast Napa.

There was never any doubt that one day the Cejas would have their own wine brand. Ariel says his parents broached the subject often, even as he and his siblings “voluntarily” joined the family work force during summer and school breaks.

With 750 cases of pinot noir, merlot and chardonnay, Ceja Vineyards released in 2001 its first wines from the 1998 harvest.

While Ariel Ceja got his viticultural education on the job as he grew up, a passion for film was realized when he enrolled in film production classes at Occidental College.

After wrapping up studies in Los Angeles, he joined the family wine business team two years ago and serves as general manager today. He’s putting his film studies to good use by launching video blogs and a new cooking show on the Internet. He intends for these efforts to be both “bilingual and bicultural. I think it’s important that we show our heritage to the masses.”

Amelia notes that Ceja wines are on the lower end of the alcohol spectrum and are consciously made to be food friendly. She feels that a majority of Americans know little more than tacos, burritos and refried beans when it comes to Mexican cuisine. She maintains Mexican cookery is a lot more, and feels that her son’s plans to work with family and regional chefs to explain their culinary heritage will be well received by all who log onto the winery’s Web site.

Titled “Salud Napa Valley,” the first Internet show will focus on beans, freshly made corn tortillas and cabernet sauvignon. It will be recorded in both Spanish and English.

In addition to offering wines for sale and a place to taste Ceja wines, the new salon will also provide incentives for joining the Ceja wine club.

Located at 1248 First St., the Ceja Vineyards tasting salon is open from noon to 6 p.m. Sunday through Thursday and from noon to 10 p.m. on Fridays and Saturdays. During the summer months, when the Chefs Market is up and running, the salon will stay open on Thursday nights as well.

Featured artist in the salon’s gallery at present is young northern California painter Maceo Montoya, featuring what Ariel calls “socially conscious works. We want the salon to be a platform as well for the voiceless…to spur conversation…to be a hip, conscious place.

“We intend to dedicate one wall to the works of high school and Napa Valley College students, to showcase the photographs and paintings of young artists.”

Also coming up at the salon will be an evening of short films as well as a concert by a young flamenco artist.

“Robert Mondavi brought California wine to the attention of the world,” Amelia Ceja declared. “I believe we represent a new chapter in winemaking, in showing how integrated the cultures of America and Mexico are today. And we want to show that Ceja wines can be paired with the foods of the world.”

Only the third winemaker in the decades-long history of Napa Valley's Signorello Winery, Priyanka Dhar French is among a handful of Indian women making a mark in California winer industry as she helps Signorello rebuild after the 2017 wildfires.

The Cabernet Sauvignon harvest continues as most — but not all — growers report a light crop following two years of low rainfall.

Wine “experts” come in all shapes and sizes, from generalists to specialists. What constitutes expert knowledge in one area of wine may have no meaning in other areas. This is one aspect of wine that makes it such a complex and difficult subject to master.

Allen Balik, The Wine Exchange: Quintessa: A quest for balance

A visit to Quintessa in Rutherford yields insights into their decision to go to biodynamic farming.

Dan the Wine Man Dawson comes up with three wines to pair with Ken Morris' Cooking for Comfort grilled fish recipes for Sept. 14, and they are not all whites.