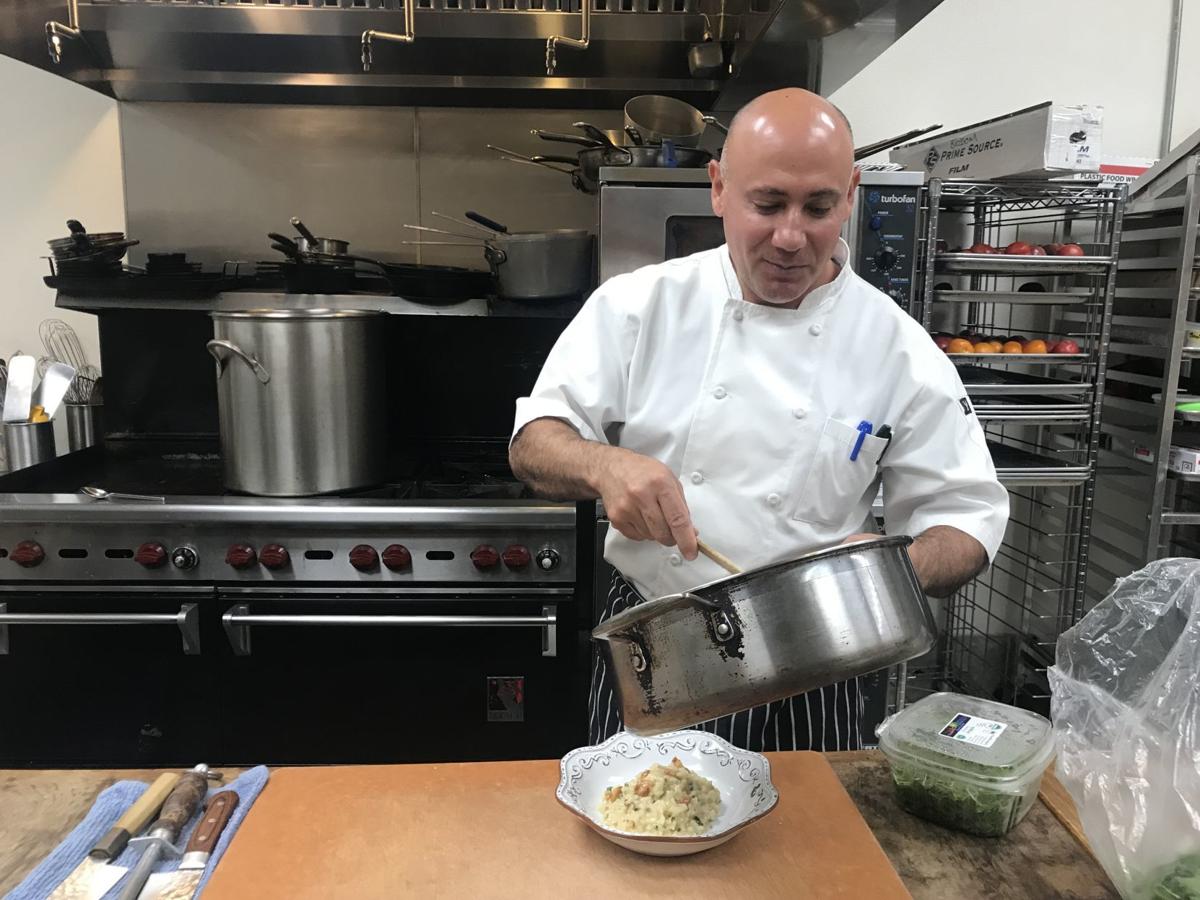 Chef Nicolas Montanez at work in the kitchen of Peju Province Winery in Rutherford. 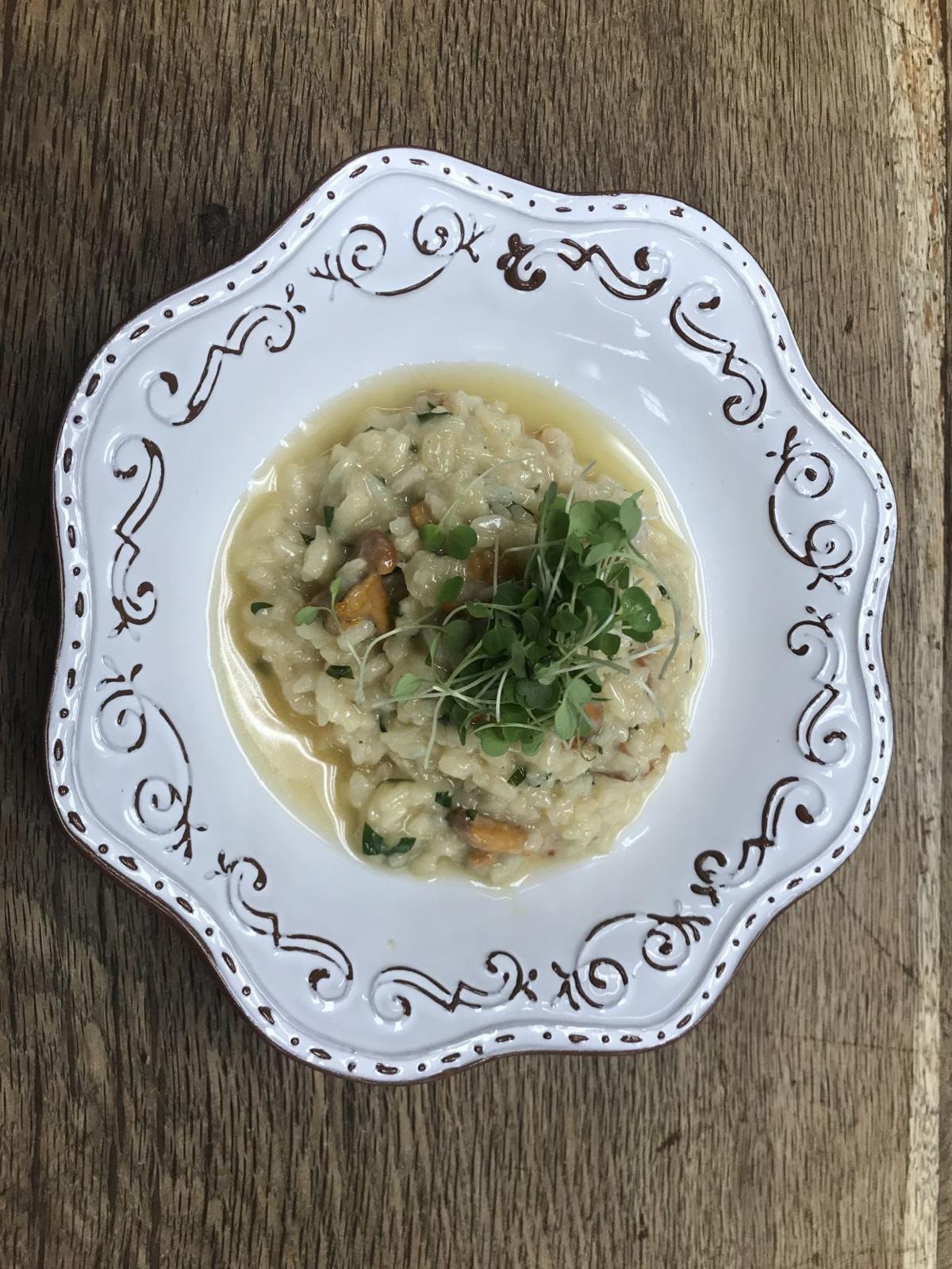 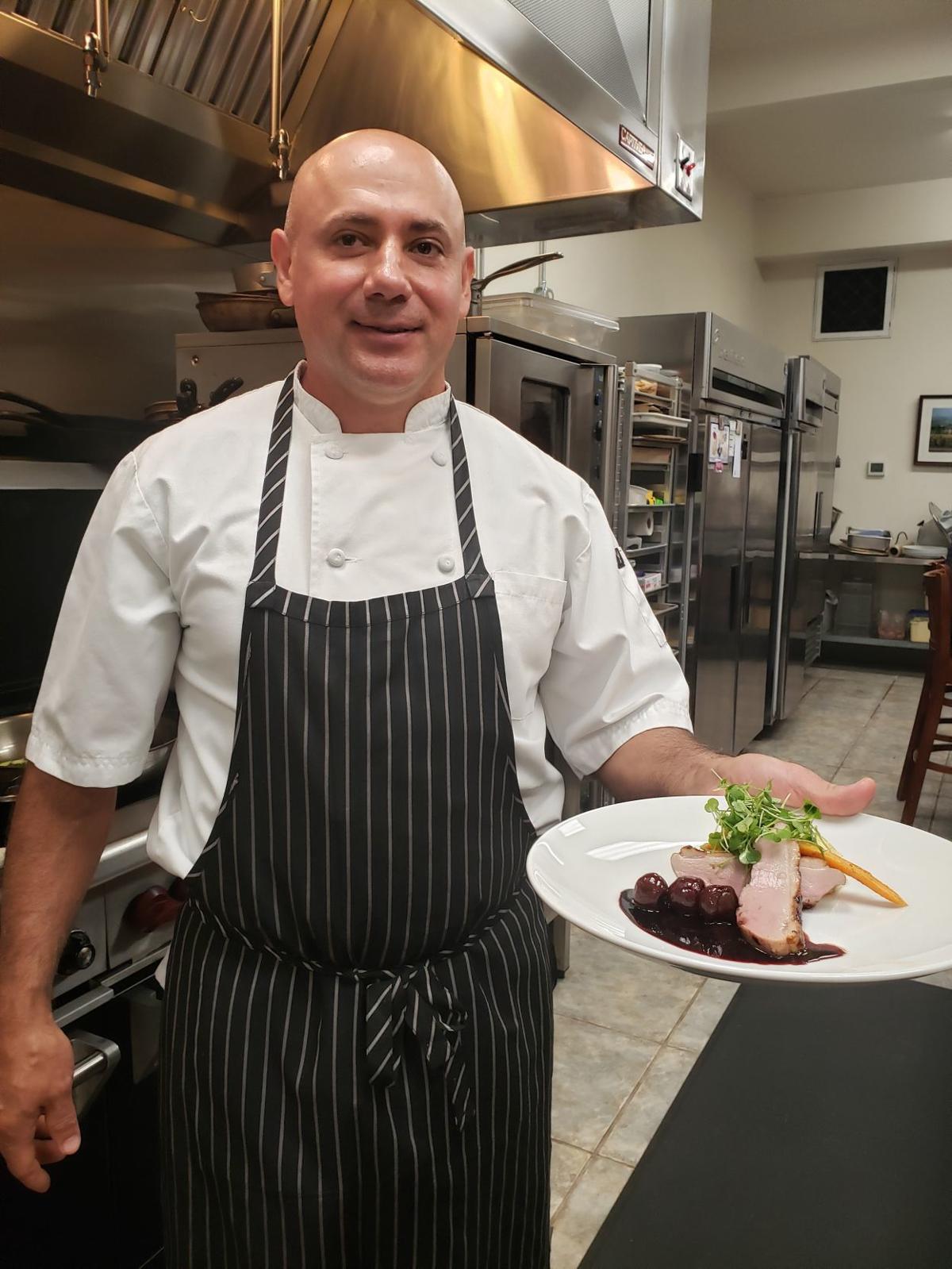 “I was lucky.” This was a recurring phrase in a conversation with Nicolas Montanez, as he described the the journey followed to his current job as executive chef at Peju Winery.

In the winery kitchen, Montanez was taking a break to chat after stirring up a corn and chanterelle risotto for Peju employees.

Winery chef can be a peach and plum of a position. You’re generally working less grueling hours than a restaurant chef. You get to design memorable meals for special occasions, working with the best of the best ingredients, often from winery gardens. You experiment with food and wine pairings. You might even get holidays off.

For Montanez, however, it’s the next step in a three-decade long career fueled by a boundless curiosity about food.

“When I came to the U.S. in 1988, I just wanted to work,” he said. He graduated from high school from his home state, Michoacán, Mexico, and headed north to Napa Valley.

“I got a job washing dishes at the Calistoga Inn. I was lucky. In a few months, I was cooking. I never imagined I’d be cooking. I just wanted to know why chefs did something. And my interest grew.”

Montanez spent “six or seven years” at the Calistoga Inn, absorbing all he could learn and taking on more responsibility. Then, in 1995 the Culinary Institute of America opened its first California campus at Greystone in St. Helena. “I really wanted to learn,” he said, and he moved over to work as a chef at the CIA.

“After two years, they would give you a scholarship to go to Hyde Park [the CIA’s first and main campus in New York]. I went to Hyde Park, and worked in the continuing ed department while I was studying.”

The two-year training program at the CIA concluded with an externship at L’Absinthe, a well-known New York bistro, where his interest in French cuisine found a full flowering.

After he completed his training, he came back to Napa Valley to work at Greystone as sous chef.

“I was lucky to get involved with the CIA,” he said. “I really broadened my knowledge. I worked with great chefs like Jean-Louis Palladin [the French chef who introduced nouvelle cuisine to Washington, D.C.] and Rick Bayless, who was a pioneer in portraying authentic Mexican cuisine in this country.”

While Montanez traces his love of cooking back to his family in Michoacan — “where there are the best avocados in the world” he said, whatever style of cuisine he undertakes, he said his underlying philosophy is of deep respect for the traditional recipes with his own touches.

His next step was an invitation to cook at Villagio Estate in Yountville where he was able to experience the full gamut of hospitality cooking. “I learned from different spaces, catering, and banquets,” and the challenge kept him absorbed for the next 11 years.

After this, he decided to return to the Calistoga Inn. “I had a good relationship with the owners,” he said. “It is like my second home.”

Five years later, he was ready for an new experience, which brought him to Peju last spring.

The family-owned winery on Highway 29 is recognizable for its distinctive tower and its row of 40-foot-tall sycamore trees that are bedecked with red lights during the winter holidays.

Originally from Los Angeles, Tony and Herta Peju purchased the land to create Peju in 1982, and their daughters, Lisa and Ariana, grew up with the winery. Immersed in the family business today, they have launched a second winery, Calmére Estate Winery in Carneros.

A stop at Peju invites visitors to explore the estate gardens and art, outside and indoors, which includes a stained glass, originally from Munich, Germany.

Working closely with Fowler, who joined Peju as winemaker in 2006, brings another dimension to Montanez’s continuing exploration of food, and he is enjoying it all. “Wineries allow you to dedicate enough time to use your style,” he said. “It allows you freedom and time so that you can really focus.”

He prepares special lunches, farm-to-table dinners, and events for wine club members. At a recent media lunch, he wowed reporters with a menu that included a quinoa and grape salad with a citrus vinaigrette, roasted wild king salmon with Italian salsa verde, garden zucchini and yellow sweet corn tamales, roasted baby rainbow carrots with garden herbs, and for dessert, a classic pavlova with fresh cherries macerated in Peju’s Port-style wine.

“I like to use what is in season,” he said. “That is wine country cuisine, light, fresh, lively and abundant.”

Montanez provided the recipes for the risotto Peju employees were enjoying that day. We also have the recipe for Montanez’s prize-winning chili, which took top honors at this summer’s Rutherford Chili Ball.

In a medium-size saucepan, heat the oil in a medium flame, add the onion and sautée for 3 to 4 minutes.

Add the rice and continue to sautée for 8 to 10 minutes until the rice starts to separate but do not let it gain color. (Make sure to stir constantly.)

Add the white wine and continue stirring. When the wine evaporates totally add 1/2 of the corn stock.

Bring it to a low simmer stirring constantly to develop the creaminess.

Continue to add corn stock as needed until the rice becomes tender to the tooth and creamy. (While the corn stock is absorbing into it, you must be stirring constantly to prevent from sticking and to develop creaminess in the risotto.

Add the rest of ingredients and continue to cook in a low fire until all ingredients get well incorporated and the risotto gains the right consistency.

Season it with salt and white pepper to taste. At this point, it must be served and enjoyed.

You can add any kind of garnish or a complementary protein to the risotto or enjoy by itself.

Note: The corn stock should be hot when adding it to the rice.

Salt and white pepper to taste

Roast the corn with the leafs in a 300-degree oven for 45 minutes.

Peel off the leaves from the corn and slice the kernels. Save the cobs to make the stock.

Combine 1/2 of the kernels with the heavy cream and bring it to a low simmer for 15 minutes, pour it into the blender and make the puree. Set aside until needed

Save the other 1/2 of corn kernels until needed for the risotto.

Combine the cobs and water and bring it to a simmer for 1 hour in a medium fire.

Strain and discard the cobs and save the stock until needed.

Note: the corn puree, corn kernels and corn stock can be made a couple of days before making the risotto.

Soak the beans in plenty of fresh water for a day.

Strain the beans and add new fresh water, making sure the water level is at least 8 inches over the beans. Bring it to a slow simmer for about 1 1/2 hours or until they are tender. Add a couple tablespoons of salt during the last 15 minutes of cooking. Set aside the cooked beans until needed.

In a large bowl combine the meat, corn flour, 2 tablespoons of salt and cumin, toss it well to make sure the meat gets a good coating.

In a large sauteé pan, heat the corn oil to medium, add the meat and sear for a couple of minutes until you get the a nice brown color in the meat. Set aside the seared meat until needed.

In a large sauce pot, combine the onions, garlic, tomatillos, jalapeño chiles, fresno, poblano, padron, and shishito chiles. Cover with fresh water and bring it to simmer for 10 minutes. Strain it, add the chopped cilantro and blend it in a few batches to make the sauce.

In a large sauce pot, heat 4 tablespoons of corn oil. Add the tomatillo sauce, the pork meat, and salt to taste. Bring it to a low simmer for about 1 1/2 hours or until the meat is tender.

When the meat is tender, add the strained cooked beans, season it to taste and bring it again to simmer. At this point, your chili is ready to be serve.

Garnish the chili with fresh chopped green onions, roasted chopped poblano chiles and avocado if you like. Enjoy!

— A cornbread muffin will be a good accompaniment to your Cinco Chiles Verdes Chili!

— For the roasted poblanos: they can be roast over open flame or in the oven. Once they are roasted peel, deseeded them and chop.

— If you can’t find the fresno, shishito or padron chiles just add a few more of the other chiles.

At the media preview dinner for Adam Perry Lang’s new restaurant, opening in Yountville on Oct. 15, it was interesting to note how many local …

Chef Nicolas Montanez at work in the kitchen of Peju Province Winery in Rutherford.