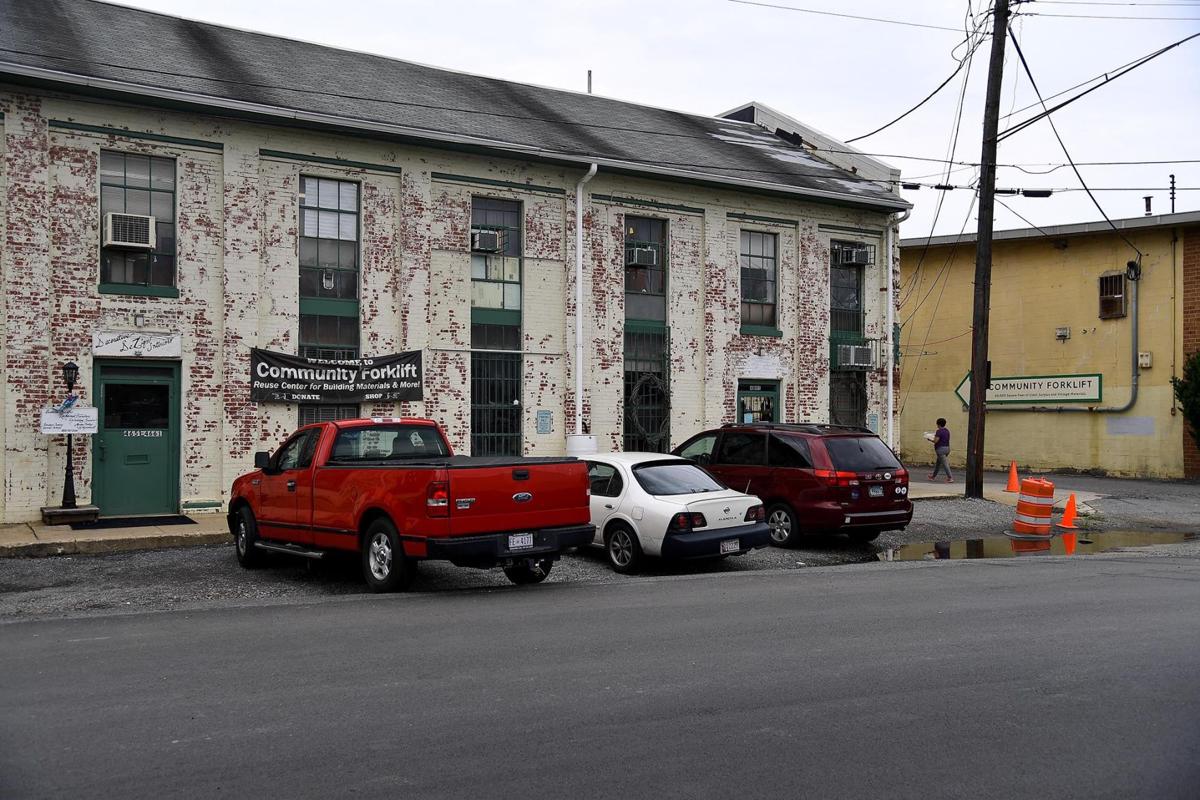 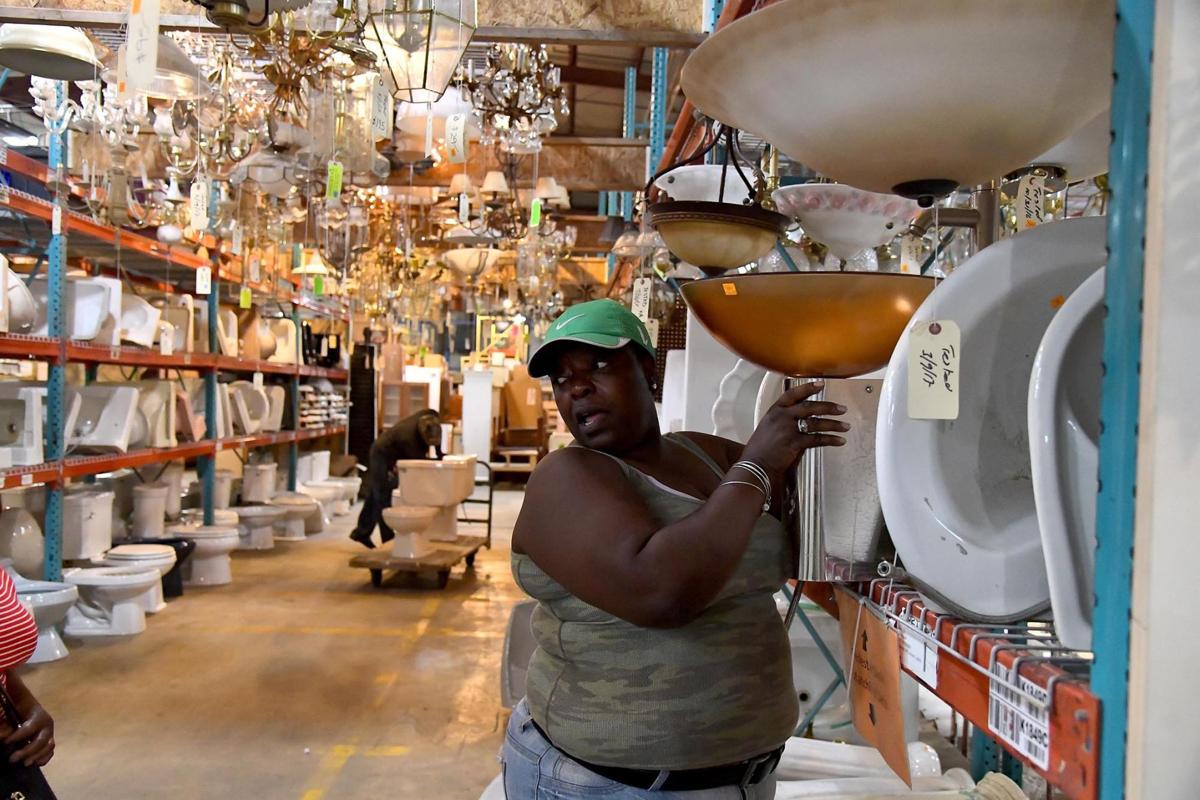 Deanna Williams came to Community Forklift to buy a refrigerator but found several other items of interest. 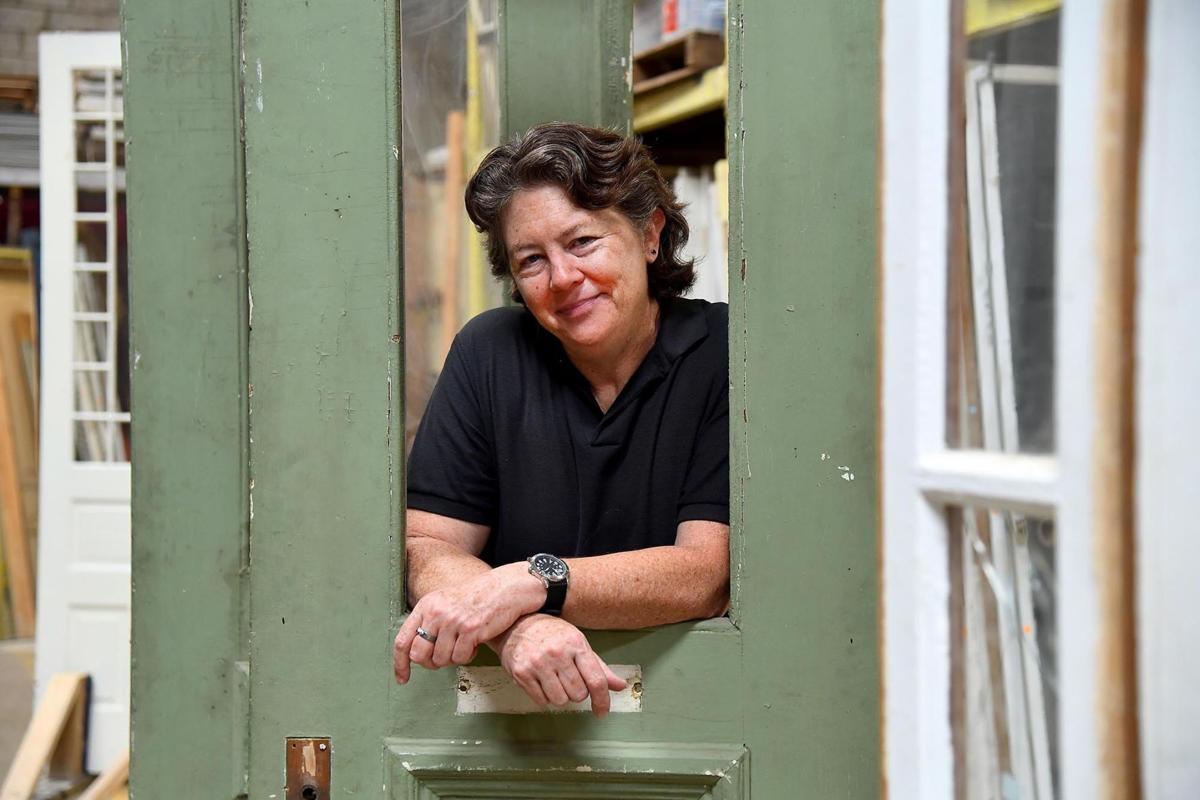 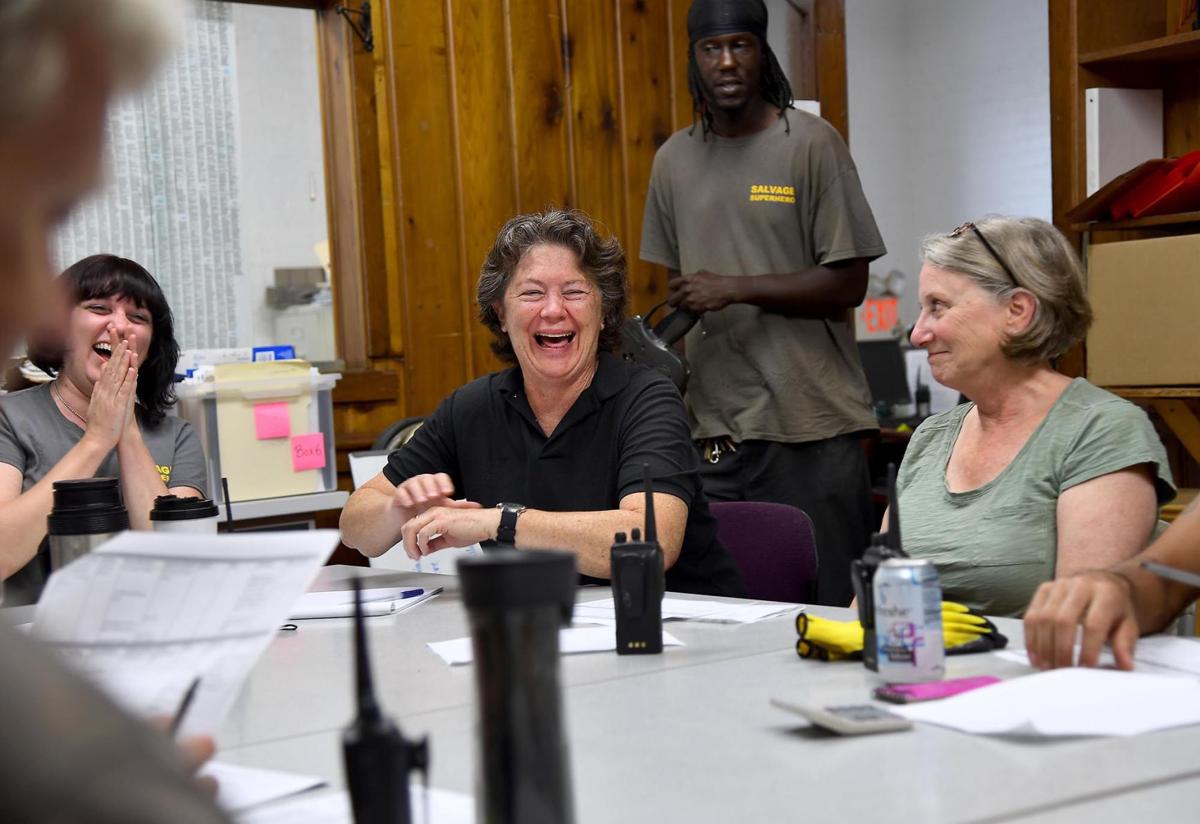 Nancy Meyer, center, tries to create a collaborative workplace where employees work together to solve problems. During a weekly morning meeting, Meyer laughs with Chris Valendez, from left, and Melissa Cooperson. 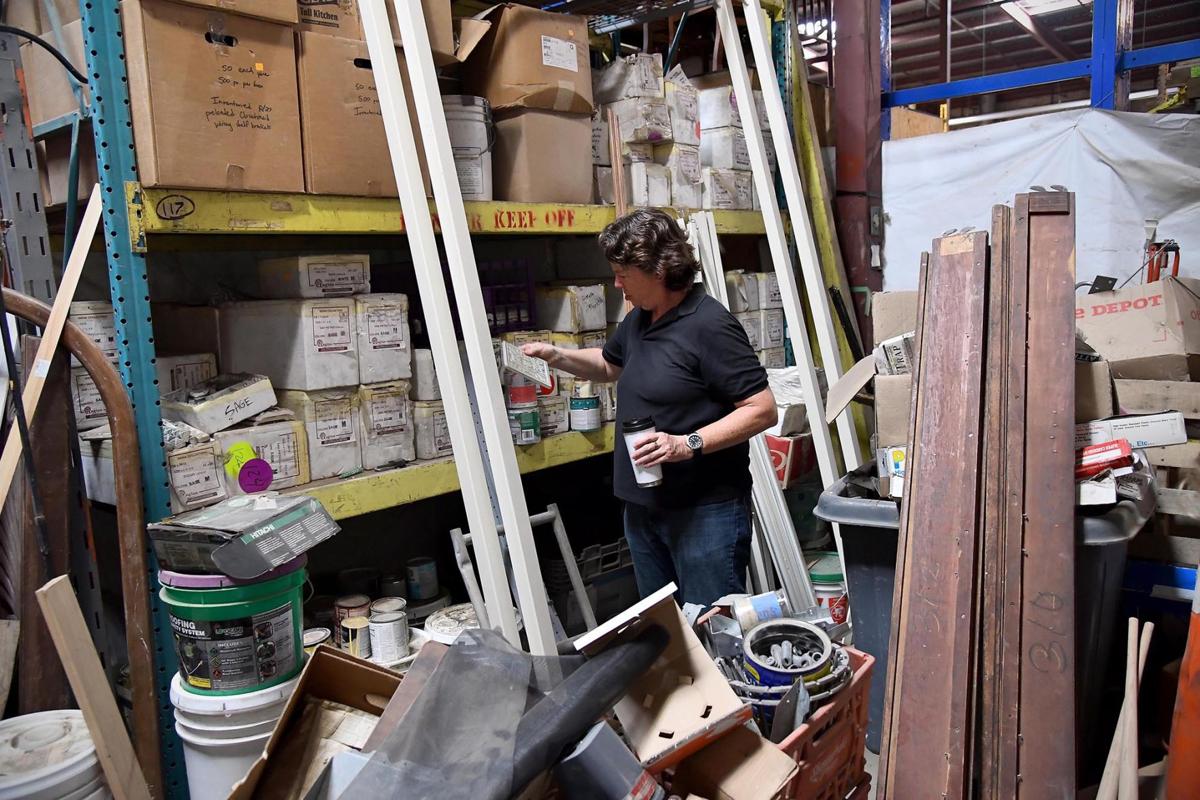 WASHINGTON, D.C. - Community Forklift's 34,000-square-foot store looks like the treasure chamber of an Egyptian pharaoh's tomb, if that pharaoh had a penchant for mid-century modern furniture and home repair supplies.

Giant slabs of milled wood, stacked cans of recycled paint, and doors and windows of all shapes and sizes form a maze of intersecting rows. Hundreds of pieces of furniture -- oak writing desks and ergonomic office chairs -- fit together in a complex game of Jenga.

There's no telling what you might find at the nonprofit reuse center on any given day. One Monday morning, someone has just dropped off an antique copper bird feeder. Staff members debate how to move a train conductor's desk, at least 10 feet wide and of uncertain origins, out of a walkway. There's buzz over a row of early-20th-century toilets that recently attracted celebrity interest.

"I was walking down the hall one day, and all I could hear was 'Woody wants yellow,' " said the nonprofit's chief executive, Nancy Meyer. Hollywood director Woody Allen had requested one of the vintage toilets for use in an upcoming project, she said.

Once, someone dropped off a pile of worn prints. They were almost thrown away before someone on staff realized that one, an original Jimi Hendrix poster, was worth about $3,000.

Another time a truck pulled up with a headstone marking the grave of President Harry S. Truman's secretary of war, Robert P. Patterson, who oversaw the army's desegregation.

"It's like 'Antiques Roadshow' on speed," Meyer said. Community Forklift accepts unwanted furniture, building materials, tools and appliances -- Meyer estimates that it has kept over $30 million in materials from going to waste -- and sells those goods at discounted prices. (It also offers free supplies to families and individuals in need.)

Just as anything may turn up at Community Forklift, the objects the nonprofit accepts may go anywhere, too. Once, a homeowner found the bowling lanes from the very alley where she and her husband met. She used them to make her husband a "man cave" in their home. Local artist Clarke Bedford often uses the center's materials for assemblage, sculptures made out of found objects.

"This is about recapturing or resuscitating the value inherent in an object," Meyer said. For the lifelong maker-of-things and activist, each of the store's objects has a history -- environmental, political, personal -- and a future.

Sitting at the desktop computer in her cluttered office, Meyer pulled up an old black-and-white photograph of a dozen or so girls standing on a suburban street.

These were Meyer's childhood friends in Teaneck, New Jersey, who formed something like a "Little Rascals" gang. Meyer acted as the group's leader, organizing elaborate schemes. Every week, she led her friends around the neighborhood on junk collection days, scavenging for discarded treasures. Once, she found an accordion.

"It was magical," Meyer recalled. "As a kid, you can't get things for money, and all of a sudden, people are putting out things for free."

She learned to make things from found materials. With her father, she built a wooden letter holder.

After high school, when other friends enrolled in college, Meyer and her girlfriend took a road trip through Appalachia. There, Meyer learned about the region's history of grass-roots organizing, as well as its cultural heritage. She had begun teaching herself how to make musical instruments and looked for an apprenticeship with an artisan who crafted dulcimers, string instruments popular in that part of the country.

Meyer eventually found an apprenticeship near her girlfriend's relatives' home in suburban Maryland, but she had run out of money. One day, she came across a flyer with a contact for women interested in learning a trade. That led her to Libby Howard, who founded the organization Women Working in Construction and taught carpentry to women in Washington. Howard had testified in a gender discrimination and sexual harassment lawsuit that eventually led the Labor Department to issue regulations intended to rectify the near-total exclusion of women in the construction industry.

Those regulations were issued in 1978, the year Howard found Meyer her first job on a construction site. The site's superintendent, Meyer remembered, reluctantly agreed to hire her to comply with the new labor laws and swore he'd fire her the next day.

But Meyer worked hard, gripping her hammer so tightly she often left work unable to open her hands. Her mouth turned blue from the extra nails she carried in it. And after six months, when she moved on to another site, her superintendent told her he'd give her another job any day.

"I felt like I had the weight of other women on my shoulders," Meyer said. "Like if I gave up, I would have shown that we couldn't do it, that we weren't strong enough."

Often the only female worker on her construction jobs, Meyer was either shunned or harassed; she once had to fend off an aggressive co-worker with a hammer.

Eventually she took over Women Working in Construction, renaming it Blue Collar Tradeswomen. She recruited other women to the trade and worked to improve conditions for them on job sites and in unions. Meyer herself held various construction jobs until the early 1980s, when she was hit by a drunken driver, an accident that made heavy lifting difficult for her. She sued the driver and used the money to enroll in Virginia Commonwealth University in Richmond, where she studied art and social change.

After college, Meyer took on a number of advocacy roles. She ran a community arts center, a number of women's shelters and an LGBT health program, and she served on the board of the D.C. Coalition Against Domestic Violence. She also worked at a recycling center at the University of Maryland, collecting discarded glass and aluminum goods and selling them to local vendors. Then, in 2007, she heard about a nonprofit focused on environmentally sustainable reuse in suburban Hyattsville, Maryland.

"I had 20 years in nonprofit experience, and I happened to know something about building materials," Meyer said. "So I thought I could be helpful. I was just looking for some part-time work."

When Meyer arrived, Community Forklift, founded in 2005, was in serious debt. Only half a dozen staff members managed the enormous warehouse, which was so disorganized that customers could rarely find the materials they wanted. One table of hardware was so cluttered that staff called it the "table of luck," because if you closed your eyes and dug through its overflowing piles, you might find anything. Earning little revenue, Community Forklift could barely afford rent.

Meyer's part-time job eventually became a full-time mission to get the nonprofit off the ground. She negotiated with the landlord for a lower rent, cleaned up the store, created guidelines to standardize prices and designed internal structures that would make operations more efficient. Because Community Forklift couldn't afford advertising, she launched a grass-roots marketing campaign to educate the community about environmental issues and promote the nonprofit. Community Forklift still hosts educational programs, including monthly arts festivals and DIY reuse workshops.

When Meyer took over in 2012 she expanded the store's staff, which now totals about 50 part- and full-time workers. She hoped to recruit employees who, she said, are often treated as disposable in today's economy. Several women head Community Forklift's leadership team. All the jobs pay above minimum wage and offer health benefits but do not require a college degree. Meyer has worked with Project Empowerment, a local advocacy organization that helps formerly incarcerated people, among others with barriers to employment, find part-time work. Two men who joined Meyer's staff through that program will become full-time employees this fall.

But she said Community Forklift still has work to do. She hopes to turn its indoor space into a combination store and museum where customers can not only buy materials but also learn about their histories. Meyer worked with other environmental activists in the community to get Prince George's County's "Port Towns" -- Bladensburg, Colmar Manor, Cottage City and Edmonston -- designated as an "EcoDistrict." She hopes to take advantage of that designation, which marks the community as a leader in sustainability, to expand Community Forklift's campus into a sort of "reuse commons," with spaces where inventors and entrepreneurs can work with reuse materials, plus art galleries, performance spaces and a park.

Meyer imagines that Bedford, the assemblage artist, might make use of the space. She feels a special connection to his work, which creates new meaning from found materials.

"Community Forklift is sort of an assemblage," she said.

Napa Journal: Reaching out while sheltering at home

Columnist Courtney checks in on his relations by phone. Home confinement is having its effects.

Surviving the test of time: Recipes from a home chef

Editor’s note from the department of silver linings: There is not a lot of good news as the coronavirus sweeps around the world, but one fine …

Safety measures are in place at the Napa Farmers Market.

Deanna Williams came to Community Forklift to buy a refrigerator but found several other items of interest.

Nancy Meyer, center, tries to create a collaborative workplace where employees work together to solve problems. During a weekly morning meeting, Meyer laughs with Chris Valendez, from left, and Melissa Cooperson.