Become a Member
Read Today's E-edition
Share This
A heart for animals: Berryessa resident copes with the aftermath of the 2020 wildfires
Share this
1 of 4 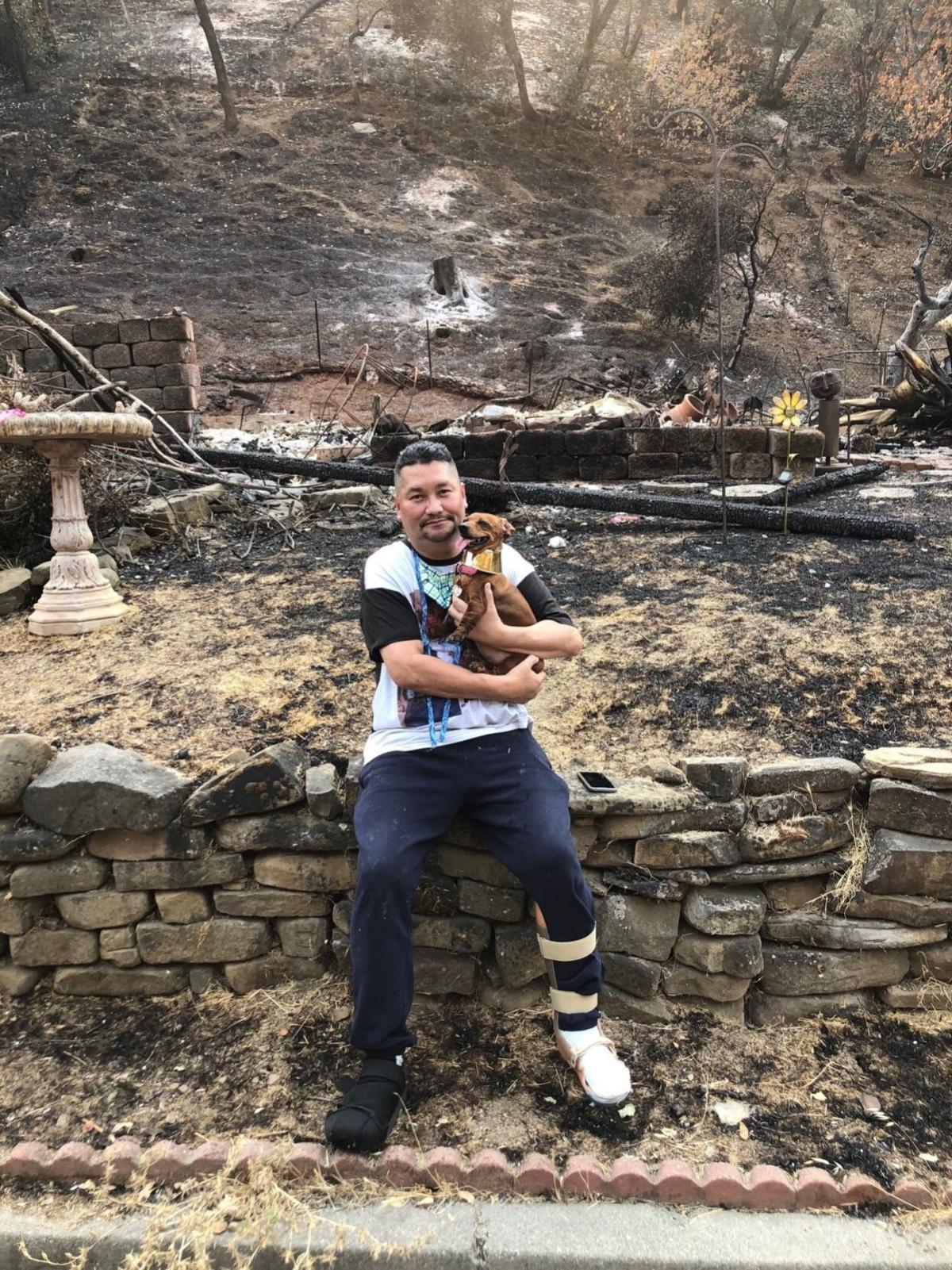 Richard Wilson holding his dog, PiPi Chan, in front of his Berryessa Highlands home that was destroyed by the 2020 wildfires. 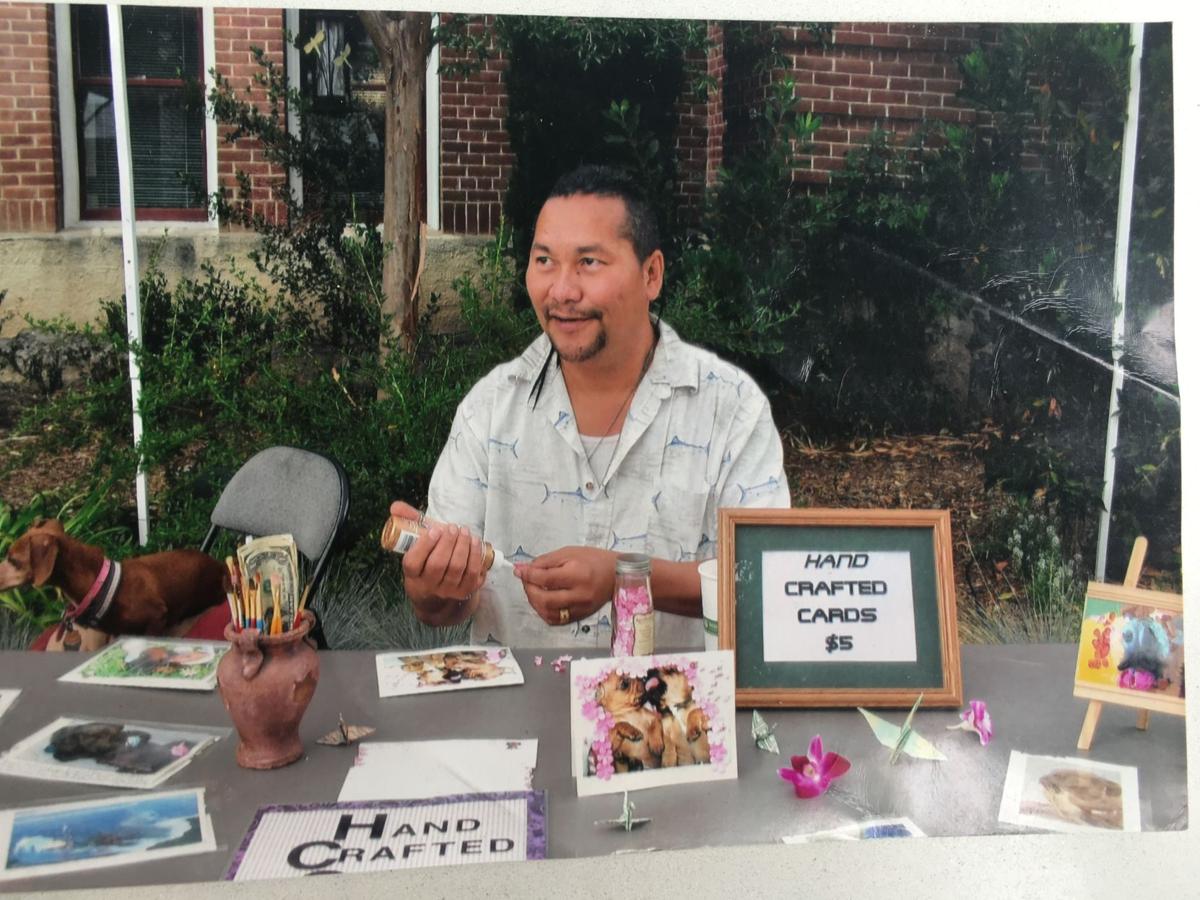 Richard Wilson selling his hand-crafted, pet-themed cards at an event in Sonoma. 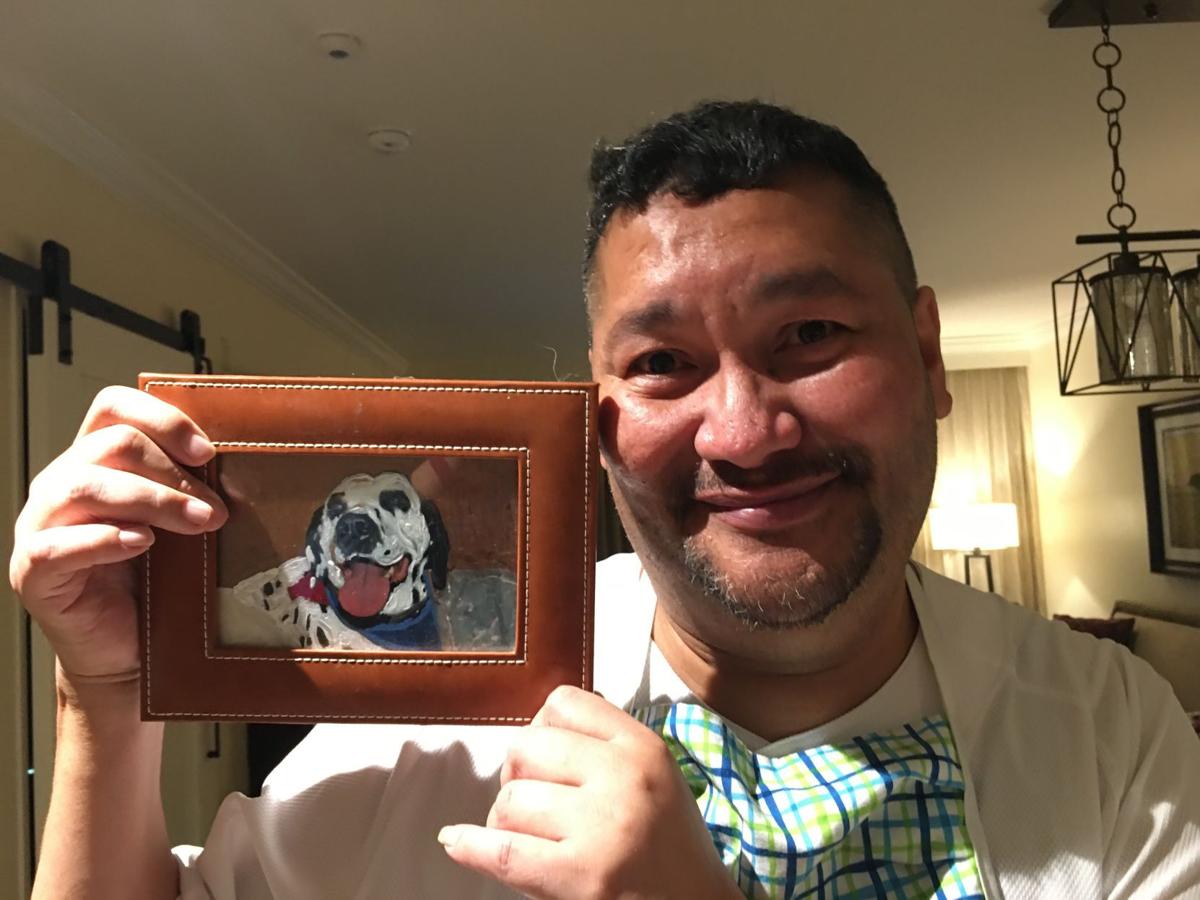 Remembering Koochie, the beloved Dalmatian Wilson honored by creating Koochie Kardz. Richard Wilson holds one of the few pictures he was able to save from the fire. 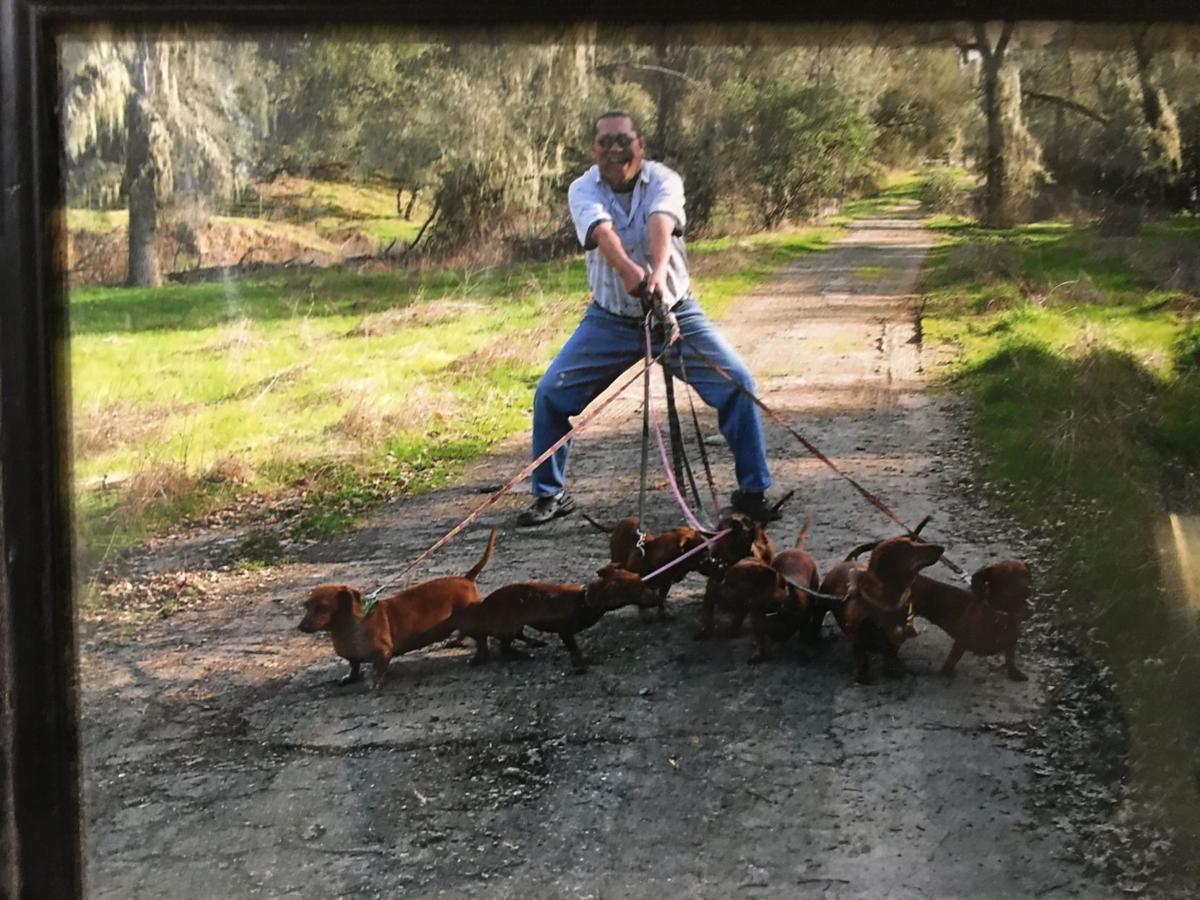 One of the few photos he was able to save shows Richard Wilson in happier days walking his Dachshunds.

Richard Wilson has a heart for animals. Over the years, he has donated emergency oxygen kits for pets to fire departments in Napa County to help animals survive fires.

Now, Wilson is grieving for the pets that he couldn’t save when fire swept through his Berryessa Highlands neighborhood and burned his home along with those of his neighbors. Though he saved his five dogs and two cats he lost 18 exotic birds, a turtle and his fish.

“I had neighbors that said they thought there was no way the fire would jump the lake, over to the Highlands,” Wilson recalls. “When the sirens went up our street telling us to vacate, I literally had 15 minutes to get out.”

In that short time, he managed to grab some photos that were hanging on the wall as well as his dogs and cats and their food but had to leave his other pets.

Unable to drive due to a fractured ankle and neuropathy in his feet, Wilson got a ride to safety with his neighbor Cheryl Blanchett, as she evacuated. Though Blanchett’s car was packed with her own pets and belongings, she somehow fit Wilson and his pets into her vehicle.

“I had two small dogs on my lap,” Wilson said. “There was no room for me to bring a carrier. My medium-sized dog was sitting on her cat carrier.”

With the exception of what fit into his neighbor’s car, Wilson had to leave everything else behind when he evacuated his home – a place he had owned for 28 years.

With a breaking heart, he left food and water for his turtle and 18 exotic birds in his aviary on the patio. He also had to walked away from the fish in three tropical fish aquariums inside his house.

In addition, he left his wheelchair, walker and medications.

It was especially painful for him to leave behind what he had inherited from his mother—the antiques and “fine things like room dividers” that had been in his family for generations and the art made by his mother, a Japanese artist.

“With the neuropathy in both my hands and feet I can barely open a bottle now, let along do artwork,” Wilson said.

In the past, Wilson built ornamental bird houses that he donated to be auctioned off for the Humane Society of the North Bay and other animal causes.

He also painted pet-themed greeting cards that he sold for $5 each at Farmers Markets, the Harvest Festival in St. Helena and other events to fund the purchase of the pet oxygen kits for fire stations.

Wilson was honored by the American Red Cross during their “Real Hero’s” award breakfast as the “animal person of the year” in 2012 for his donation of emergency pet oxygen masks to Napa County fire stations, according to a Napa Valley Register article from eight years ago.

Each of these kits came with masks in three sizes, capable of fitting large, medium and small dogs as well as cats. Wilson donated these kits to 14 fire departments in Napa County and has been planning to also donate these kits to fire stations in Solano and Sonoma counties.

Wilson’s inspiration to use his art to purchase the kits arose from his desire to honor the memory of Koochie, his beloved Dalmatian dog, after she died. He created a line of Koochie Kardz in her memory.

Wilson’s devotion to his animals – as well as the pets of other animal lovers—didn’t stop when they died. In the past, he has recruited other animal lovers to help him clean up the gravesites at the Bubbling Well Pet Memorial Park where he has nine pets buried. He furnished cleaning supplies for the other volunteers. This endeavor was written about in a Vallejo Times Herald article in 2015.

“I put flowers there and clean up the area,” he said. “It makes me feel good.

I hope that when I go someone will clean the gravesite of my pets.”

“It is ironic and very sad that someone as dedicated to helping animals survive fire as Richard lost some of his pets when fire consumed his property,” said Zaza Fetterly, a fellow artist and dog and bird lover who often exhibited her artwork at the same Farmers Markets where Wilson’s art was on exhibit.

“Richard would rescue exotic birds from all over. When I was moving, I boarded my parrot at his place. He had an aviary in a beautiful garden,” Fetterly said. “I was very close to my parrot, so visited him there a lot.”

“For 10 years, my parrot was always with me – most of the time on my shoulder singing and talking,” Fetterly continued. “He would greet you with lots of phrases and he often sang the French national anthem. He immediately bonded with Richard and loved being around all the other birds at his place.”

Now, during some sleepless nights, Wilson agonizes over the animals he could not save and worries about finding a place to live that will accept his pets.

His spirits are lifted by the kindness and generosity he has experienced since the fire. Whiskers Tails & Ferals is taking care of two of his dogs and Jameson Humane “generously donated lots good quality dog food and pet supplies,” he said.

Wilson’s family, who affectionately call him “Koochie,” say that anyone who has ever known him knows that his animals mean everything to him, and they’d like to cheer him up.

His niece, Rachel Wilson, created a fundraiser for her “Uncle Koochie, because he hates asking for help and needs basic necessities.” Insurance is covering the cost of his home but won’t be able to cover the nearly $100,000 worth of belongings that burned.

Hubcap Ranch and the historic Aetna Springs resort are among the remote, east Napa County survivors of the massive Hennessey Fire.

Cal Fire records show Napa County hasn’t had a fire the size of the Hennessey Fire since at least 1932.

As an antidote to all the canceled art shows, on Saturday, Oct. 17, from 10 a.m. to 5 p.m. an Art Drive Pop Up event gives art lovers to the opportunity to meet 19 Art Association Napa Valley artists and see their work.

The Spirit of Giving: The Napa community's inspiring response to hard times

During this challenging time the desire to help others is alive and well in the Napa community. Rosemarie Kempton shares examples of Napa’s compassion and generosity.

Art in the library: The 'divine spark' of Frank Trozzo

Watch Now: Tricks to get the most out of your tech devices

Watch Now: Tricks to get the most out of your tech devices

Five of the best foods for lowering blood pressure

Five of the best foods for lowering blood pressure

Richard Wilson holding his dog, PiPi Chan, in front of his Berryessa Highlands home that was destroyed by the 2020 wildfires.

Richard Wilson selling his hand-crafted, pet-themed cards at an event in Sonoma.

Remembering Koochie, the beloved Dalmatian Wilson honored by creating Koochie Kardz. Richard Wilson holds one of the few pictures he was able to save from the fire.

One of the few photos he was able to save shows Richard Wilson in happier days walking his Dachshunds.