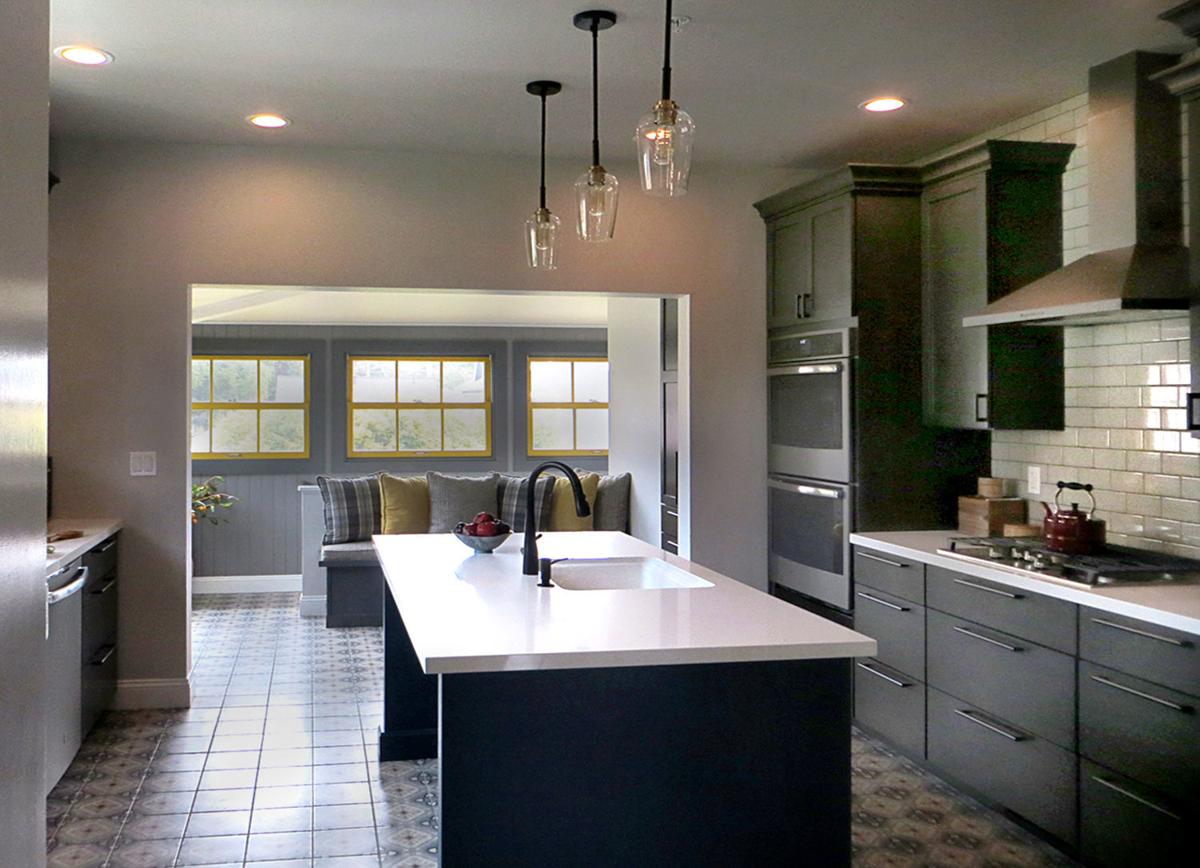 This 100-year-old kitchen was enlarged by removing walls and connecting it to the stair landing. The pattern on this decorative porcelain tile gives the floor a distinct personality. Shaker-style cabinets done with a charcoal finish and island done in a complimentary blue. All new appliances in a matte, slate finish blends into the color of the cabinets. The countertop is Silestone quartz. 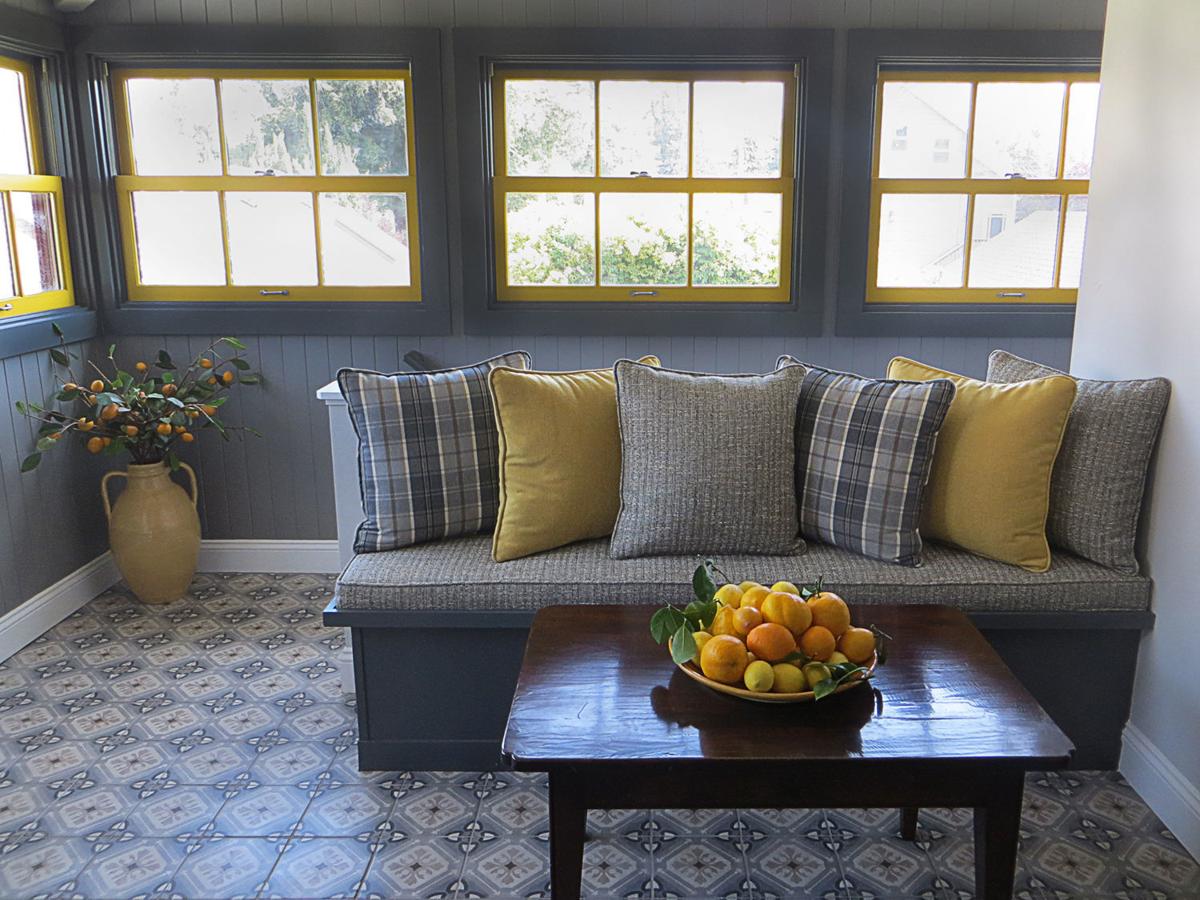 This new opened space accommodates a built-in bench. The walls and windows at the landing were painted in two shades of gray and mustard-yellow. Fabrics for pillows were chosen to coordinate. 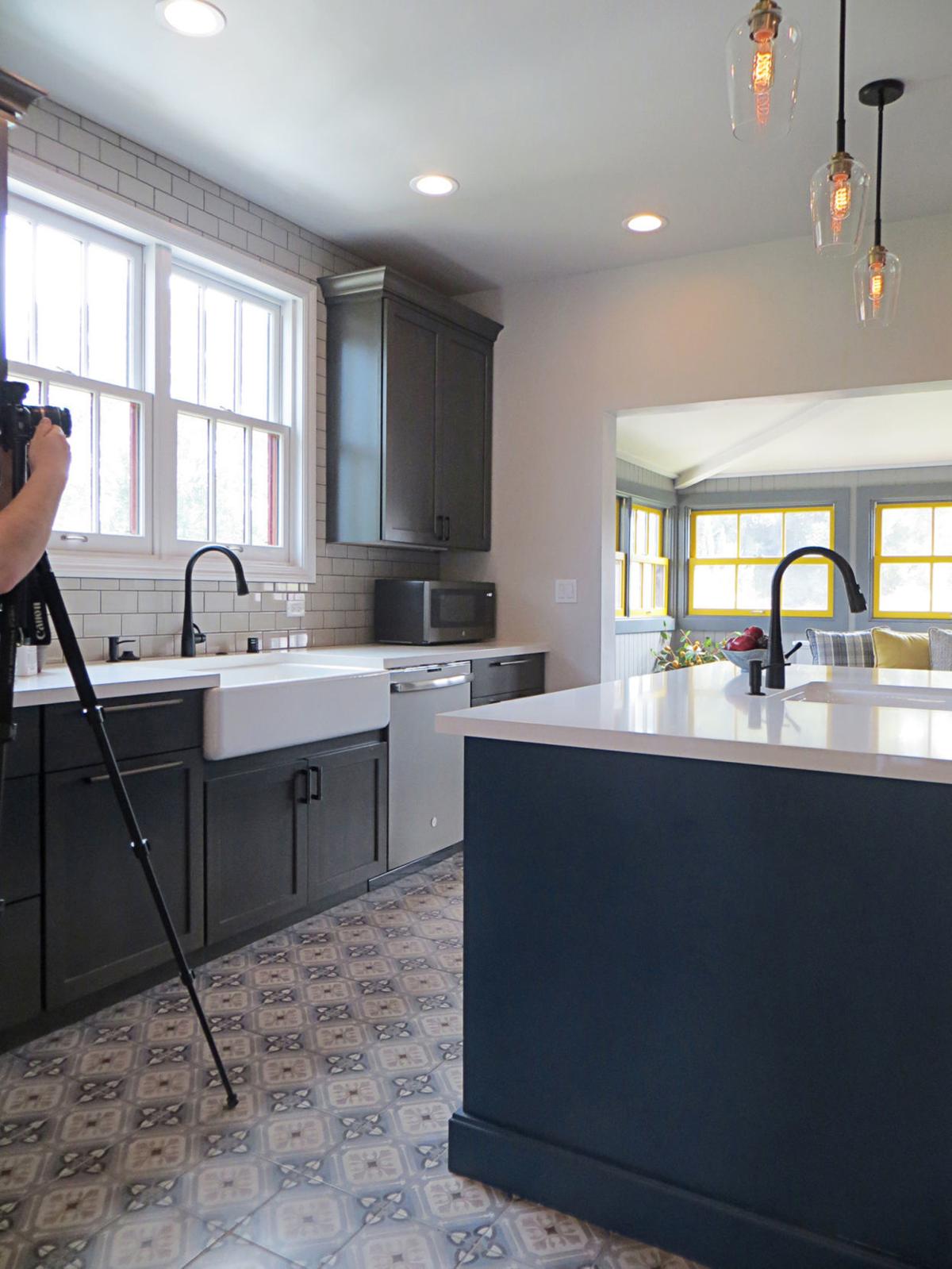 Suzanne Simas, new owner of the Rota family home, sets up a tripod and takes photos of her new home. This angle also shows the other side of the kitchen.

This 100-year-old kitchen was enlarged by removing walls and connecting it to the stair landing. The pattern on this decorative porcelain tile gives the floor a distinct personality. Shaker-style cabinets done with a charcoal finish and island done in a complimentary blue. All new appliances in a matte, slate finish blends into the color of the cabinets. The countertop is Silestone quartz.

This new opened space accommodates a built-in bench. The walls and windows at the landing were painted in two shades of gray and mustard-yellow. Fabrics for pillows were chosen to coordinate.

Suzanne Simas, new owner of the Rota family home, sets up a tripod and takes photos of her new home. This angle also shows the other side of the kitchen.

Who wouldn’t want to hear the words, “Your grandmother would be so proud”? They were said by Napa native, Ernest Rota, to his daughter, Leslie. He was referring to the recent completion of their family home’s renovation. It’s a saltbox style home located on a picturesque street in one of Napa’s historic neighborhoods.

The house was built sometime in the late 1800s (records date only to 1900). It was purchased by Ernest’s parents in 1935. His father, Camillo, an Italian immigrant from Bergamo, had previously boarded at the Depot Saloon after serving in the United States military during World War I. At the time, the Depot was also a boarding house and grill — and where Camillo met his future wife, Aurelia Varni, who was employed as a waitress.

Much has been written about The Depot over the years, and I mention it again because of an interesting connection to the Rotas’ renovation. The Depot was originally built and established by Giovanni Battista (aka Giobani) and Virginia (Tornari) Ferrogiaro. On Oct. 5, 1881, they purchased the 6,000 square-foot lot that had previously been the site of the Washington Hotel (formerly known as the Ghisletta Hotel) before it burned down.

Besides being the place where Cayetano Juarez died (while sitting at the bar in 1883), the Depot is known for its malfatti. Virginia, a native of Corbesassi in the Lombardia region of Italy, introduced malfatti to the Depot. This may be a surprise to some, but this savory dumpling is a signature recipe in Lombardia. When I say “recipe” I mean “a handful of this and a-little of that.” Is Virginia’s malfatti the same that we enjoy today? Maybe.

In 1925, Joseph and Theresa Tamburelli purchased the Depot from Virginia. (Giobani passed away in 1890). Did Virginia pass down her malfatti recipe to Theresa? Maybe. Did Theresa, also a native of Italy, have a recipe of her own? Maybe. There are hundreds, or perhaps thousands, of malfatti recipes throughout Italy. Some are made of herb, cheese, and breadcrumbs. Some are spinach, cheese and flour. And some are just rolled pasta dough cut in a haphazard (or bad) way. “Mal fatto” translates as “badly made.”

Fortunately for us, Theresa shared a malfatti recipe with Clemente Cittoni when he became part-owner and chef at The Depot. It may be Virginia’s original recipe or it may be Theresa’s version. In either case, we can pick up an order at Clemente’s Italian Takeout at Val’s Liquors on Third Street. Or, we can order a variation from Lawler’s Liquors on Jefferson Street, once owned by Theresa’s sister, Rose Martini.

This stroll down Napa history lane sets the stage for the connection I referred to earlier. In 2016, when helping Leslie with a design update for the Claffey and Rota Funeral Home, she asked if I could recommend an architect. I thought of Kevin Zeller from Zero Ten Design. Sadly, that same year, the Rota family suffered the loss of Ernest’s son, Bob.

Bob had purchased and lived in the family home since 1974. The funeral home project was put on hold and the renovation of Bob’s home began. Leslie and her daughter, Suzanne, (who would become the new owner), asked Kevin to draw plans and hired contractor, Rick Leonard, to implement them.

In writing today’s story, I am reminded of how small a town Napa once was. Giobani and Virginia Ferrogiaro’s great-great-grandson (Kevin) became the architect for Camillio and Aurelia’s great-granddaughter (Suzanne). If it wasn’t for The Depot, we would not only be deprived of malfatti, but the Rotas may never have met. They would never have bought their treasured home, and I would never have had the pleasure of helping them restore it, write about it, and also dig deeper into the history of Napa’s malfatti.

If you think this is serendipity in its finest form, there’s even more. It was Bob Rota who first contacted me to help with the funeral home because he was a fan of my weekly column in this Home & Garden section. I only wish he could read what I’ve written today.

Back to the renovation: It was extensive. My part, alone, took a year to complete. But this 120-something year-old house is now as good as new from its foundation to its pitched-roof peak. But, even with the many updates, Suzanne wanted to acknowledge its inherent charm.

For instance, she kept the considerable amount of millwork and extended the hardwood floors. The original floors had been installed by Ernest’s brother, Roy. The round pegs at the ends of planks (to help keep them in place) were hand-sanded, and therefore, not perfectly round. One can value and appreciate such imperfection. The new pegs are machine-cut and impeccably-round. Not quite as heartwarming but still a good design choice.

Interior walls were reconfigured in order to bridge the kitchen and stair landing and to open up the space. It now accommodates a built-in bench and island. Traffic flow to the bedrooms was improved, and the master bath was redesigned in order to accommodate a soaking tub.

Suzanne’s style preference is mid-century modern blended with industrial. She took a slice of each, without veering in either extreme, and incorporated it into the era of the house. The modern aspects were achieved with straight-line, no-frill cabinetry and solid-patterned countertops and backsplashes. The industrial bent came from the black metal light fixtures with Edison bulbs and black hardware throughout. Suzanne chose a stunningly-handsome, slate-toned finish for her kitchen appliances. This gray, black, and white color palette also aligned with an industrial aesthetic.

To keep a cohesive design throughout, we chose varying shades of gray for all the walls. The cabinetry, quartz countertops, and wall tiles were the same except for a slight variation in shade and size. These staid and deliberate decisions not only unified the interiors but created opportunities to showcase more personality in other areas. For instance, Suzanne opted for a barn door to enter her master bath. The door’s black hardware is another nod to an industrial look and the strong, black and white hexagonal floor tile connects to the era of the house.

Given the neutral color palette, I campaigned for a splash of mustard-yellow on the inside window frames at the stair landing. Although Suzanne was skeptical, I was grateful that she took this leap of faith. I was even more grateful when she did not reject my floor tile. It wasn’t what she expected. It wasn’t what her family and friends expected. Although it looks like a patterned, cement tile (which can crack), it’s made of porcelain (which won’t crack) and is very user-friendly. It also adds the dramatic focal point the space needed.

Such a tile could be a daunting commitment, but because the pattern is reminiscent of those found in 120-year-old homes, it will always be in style in this particular house. The colors are muted and slightly worn, which makes one think the tile has been there from the very beginning.

This was a heartfelt renovation for all involved and we do, indeed, hope that Camillo and Aurelia would be proud.

Patti L Cowger is an award-winning Napa-based interior designer and owner of PLC Interiors. For more information about her design services, visit her website at plcinteriors.com call (707) 322-6522 email PLCinteriors@sbcglobal.net or follow @plcinteriors.