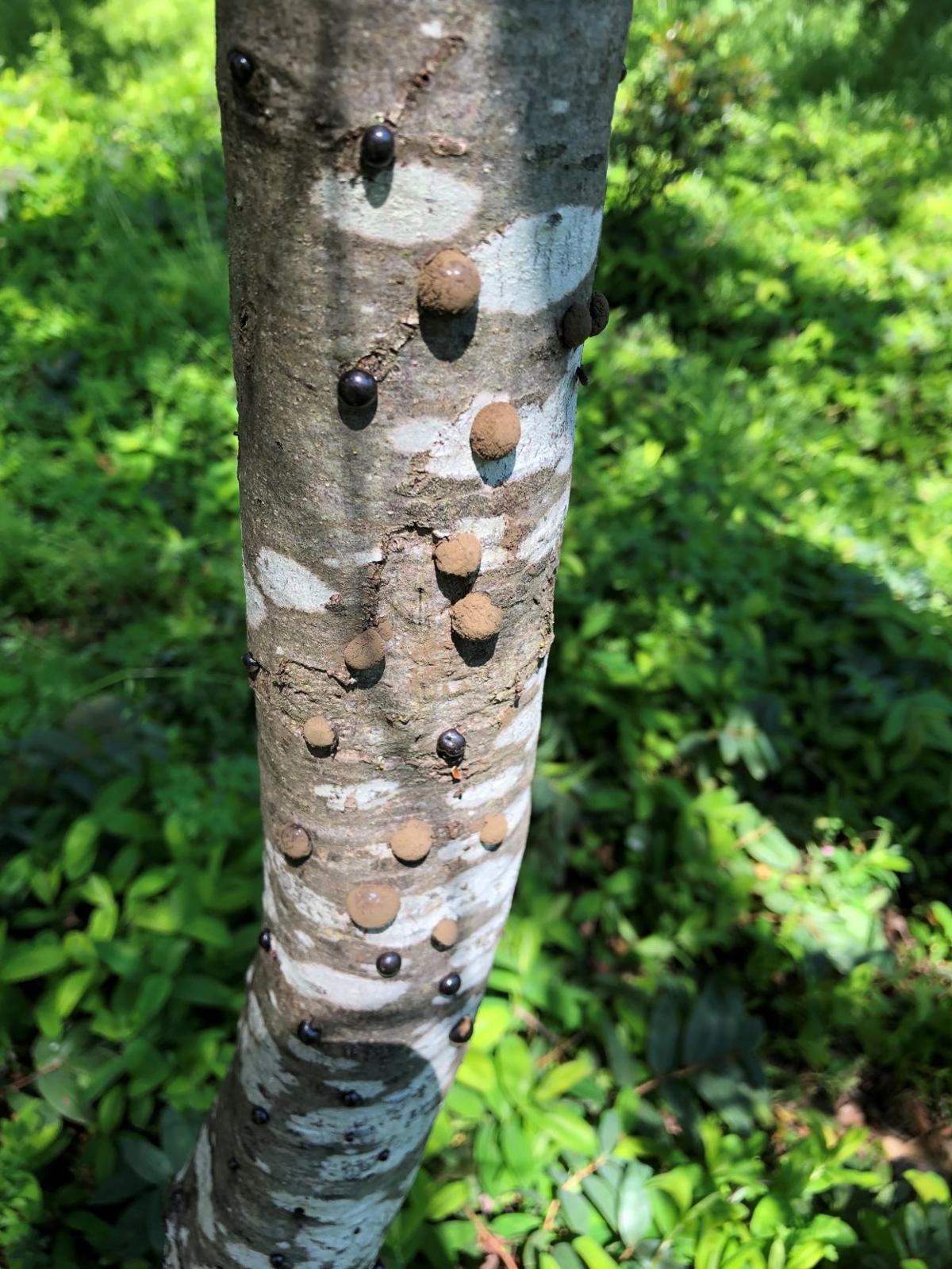 In this space over the past few months, I have been introducing a few “tree associates.”

One is beneficial: “dead man’s foot”, the fruiting structure of a fungus that absorbs water and minerals from the soil and passes them along to trees in exchange for carbohydrates.

Some are harmful: oak root fungus, which kills living tissue in trees and causes a soft white rot of the inner wood. And split gill fungus, a saprot that invades tissue killed by fire and sun injury.

One is neutral: slime mold, a creeping organism from the Protist kingdom, not a fungus, plant, bacteria or animal.

Since another common one showed up recently, I am continuing on this theme. This one is typically seen around Napa Valley, producing its fruiting structures on coast live oaks. Literature gives it and another similar and closely related fungus various common names. One is “cramp balls.” Medicinal lore says carrying them with you will relieve cramps. Another is “coal fungus.” Mature, dry fruiting bodies burn and look like charcoal.

The scientific name is a mouthful: Annulohypoxylon thouarsianum (I will refer to it as H.t.). Formerly Hypoxylon thouarsianum, the name was changed a few years ago, as Taxonomy undergoes continual refining. The similar but distinct “true” coal fungus is Daldinia concentrica, which I have not seen here. It is more common in Britain and Ireland.

H.t. is one of many opportunistic invaders of trees that have been compromised by other agents. Commonly seen on trees killed or dying of Sudden Oak Death (SOD) disease (Phytophthora ramorum – another mouthful!) charcoal fungus is not SOD. Rather, it is part of a succession of organisms that take advantage a food source, returning a dead or dying tree back to nature. Other opportunists include a wide array of fungi and insects including ambrosia beetles and bark beetles.

H. t. emerges as dark, shiny small hemispheres, the spore-producing structures growing out of the fungus in underlying dead or weakened tissue. As they mature, the glossy membrane covering the surface ruptures and reveals a layer of greenish, powdery spores. Eventually, the fruiting bodies dry, looking like small hemispheres of charcoal.

In “A Field Guide to Insects and Diseases of California Oaks” (USDA, 2006) the authors, Swiecki and Bardhardt, note that other host tree species for this fungus include California black, blue, interior live, canyon live, valley oak and tanoaks. And since the fungus causes a white rot of the sapwood, infected trees may be subject to structural failure of branches and trunks.

In the Napa SOD Blitz training session on April 26, Matteo Garbelotto explained that oaks infected with SOD — and H.t. – may live with the infection for up to five years. They become as susceptible to structural failure as dead trees. This is one of the reasons it is of value to test living oaks for SOD, and to inspect them for signs of charcoal fungus. The new “OakSTep” testing program will give enrolled professionals a new opportunity to test living oaks for evidence of SOD infection.

Thank you to all who attended the training session and then went out to collect samples for the Blitz. We had an excellent turnout. I took the box of sampling envelopes to the Berkeley Forest Pathology and Mycology Lab for analysis. The lab will process samples from the many SOD Blitz locations and release the statewide results in October.

When the SOD Map is published, the citizen scientists who contributed will be able to click on the icons shown on the map where samples were collected and see their initials. Volunteers are playing a major role in fighting a disease that threatens our California oak woodlands.

Bill Pramuk is a registered consulting arborist. Visit his website, www.billpramuk.com. Email questions to info@billpramuk.com, or call him at 707-363-0114.

A study showed 50 of out 265 surveyed trees testing positive for the sudden oak death microbe in Napa County.