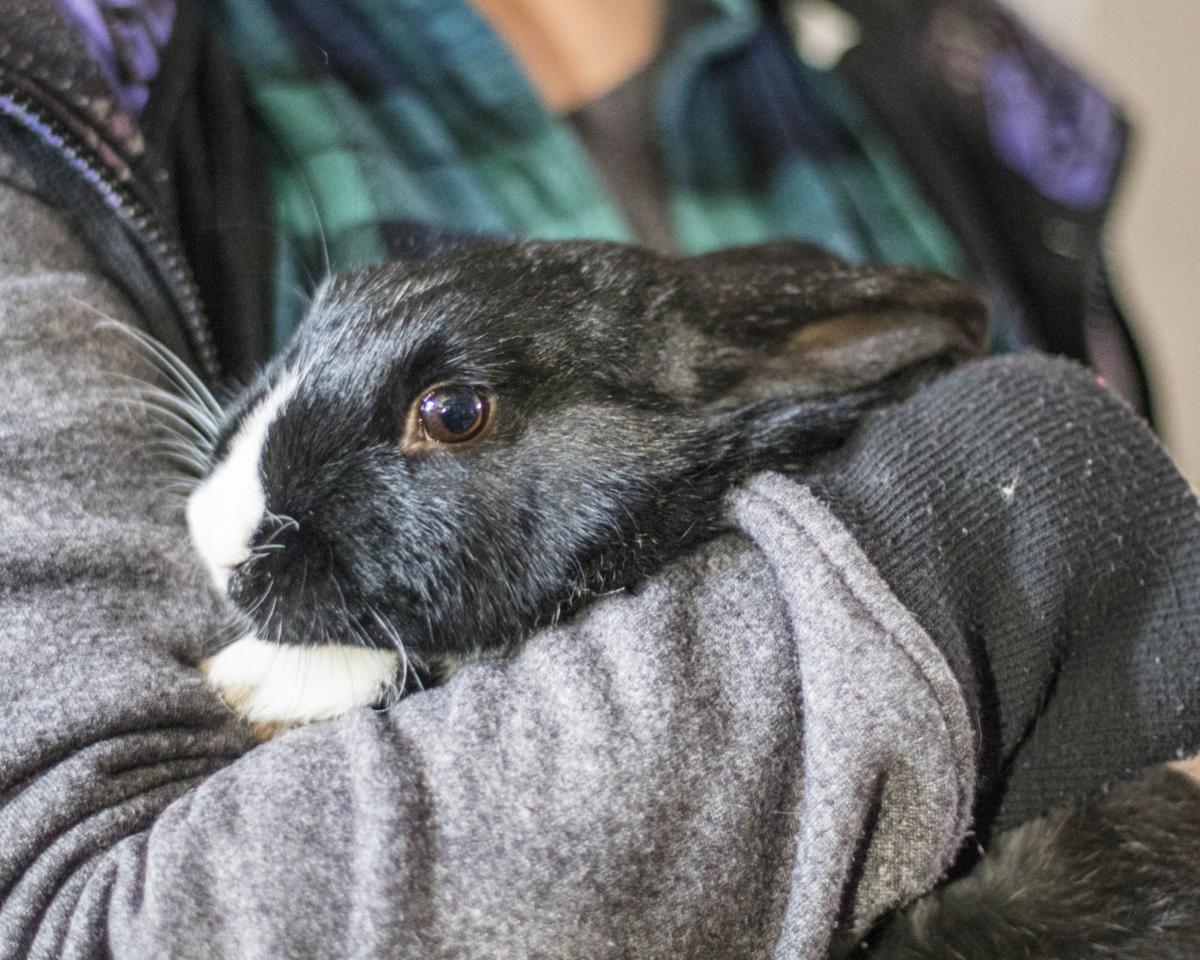 Napa Bunny Colony Rescue Operation (NBCRO), founded by Nathalie Lemaire, promotes the rescue and fostering or adoption of domestic rabbits have become feral after being abandoned or lost. 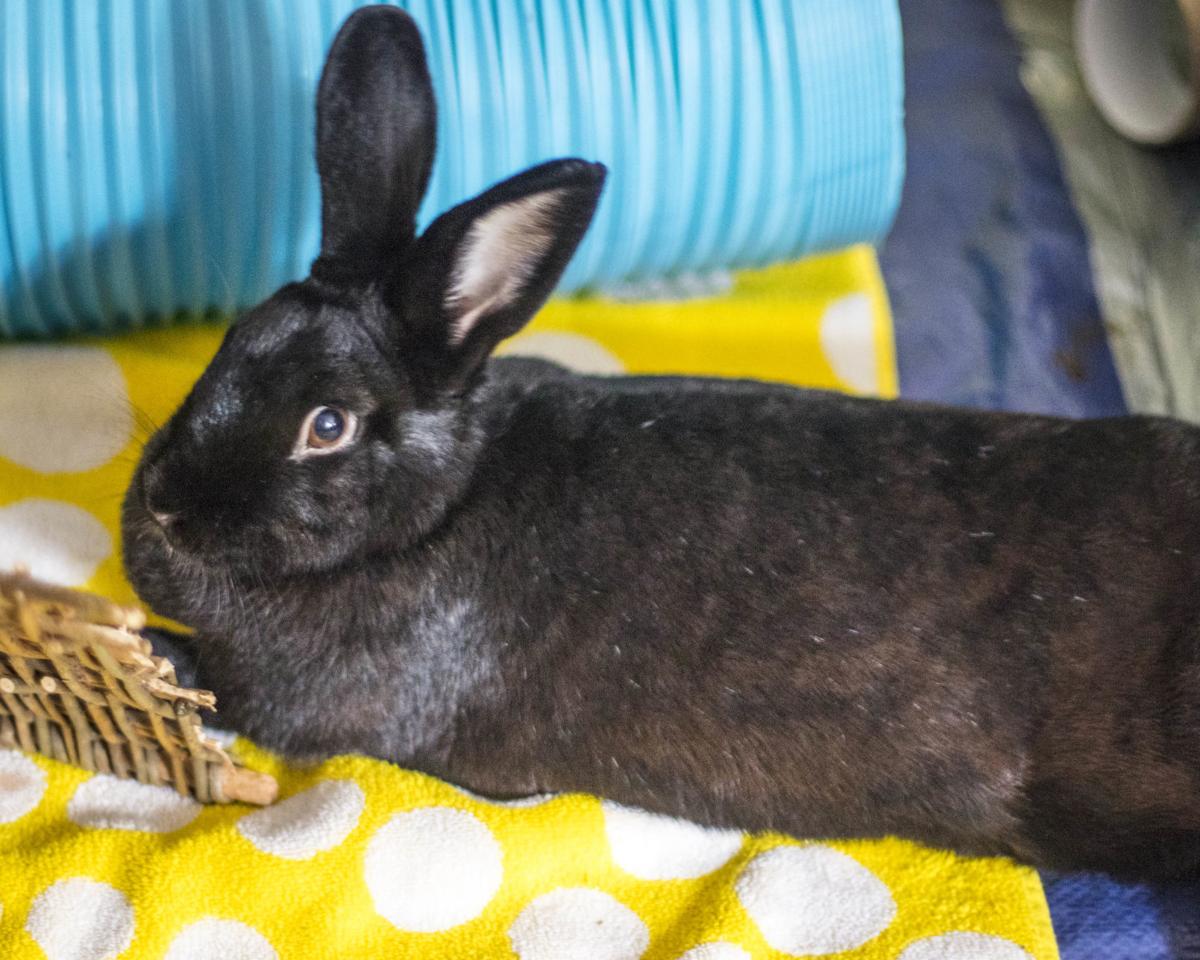 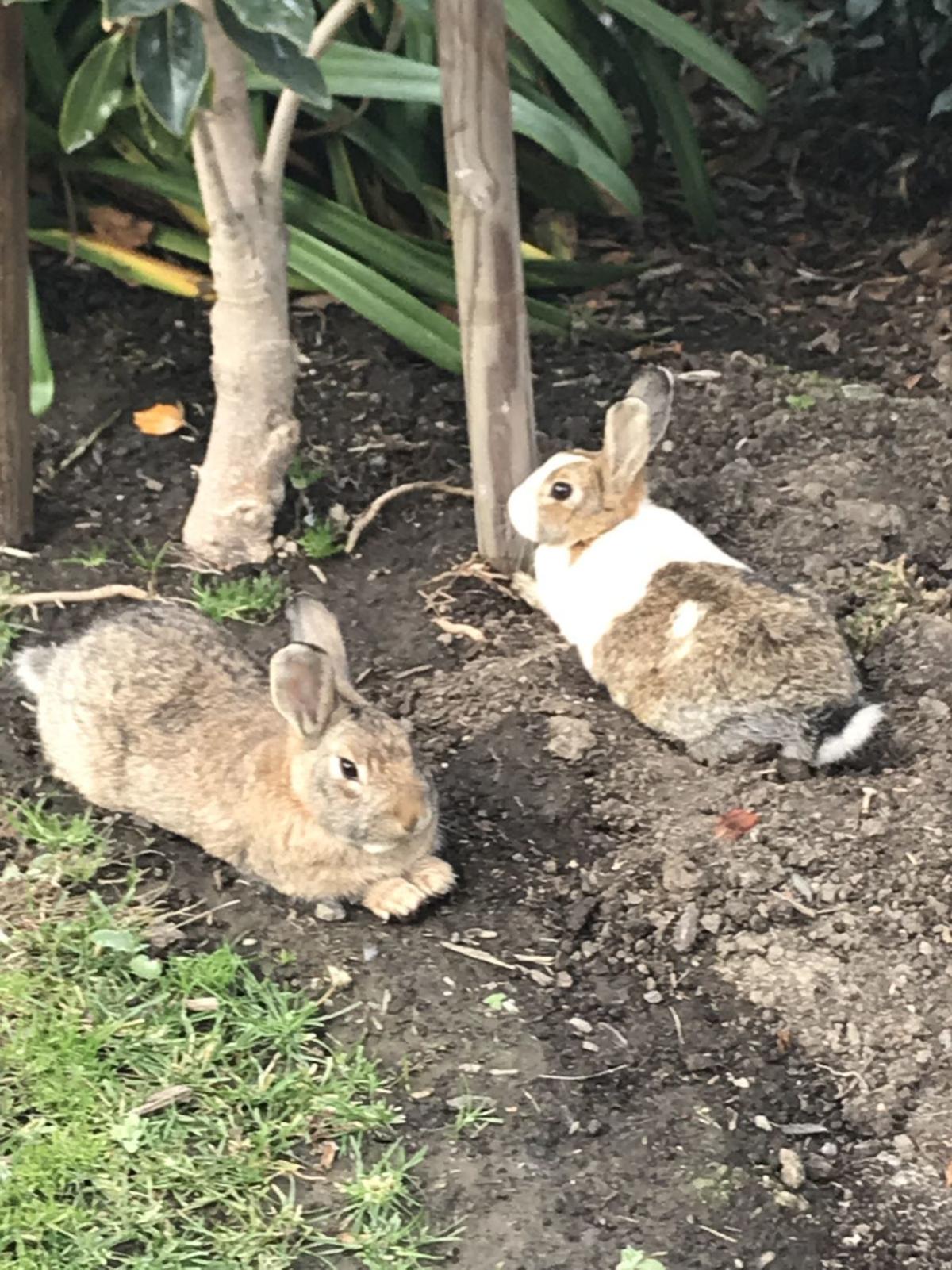 Abandoned rabbits can quickly die of exposure or fright, but they can also swiftly reproduce, leading to colonies of feral rabbits. 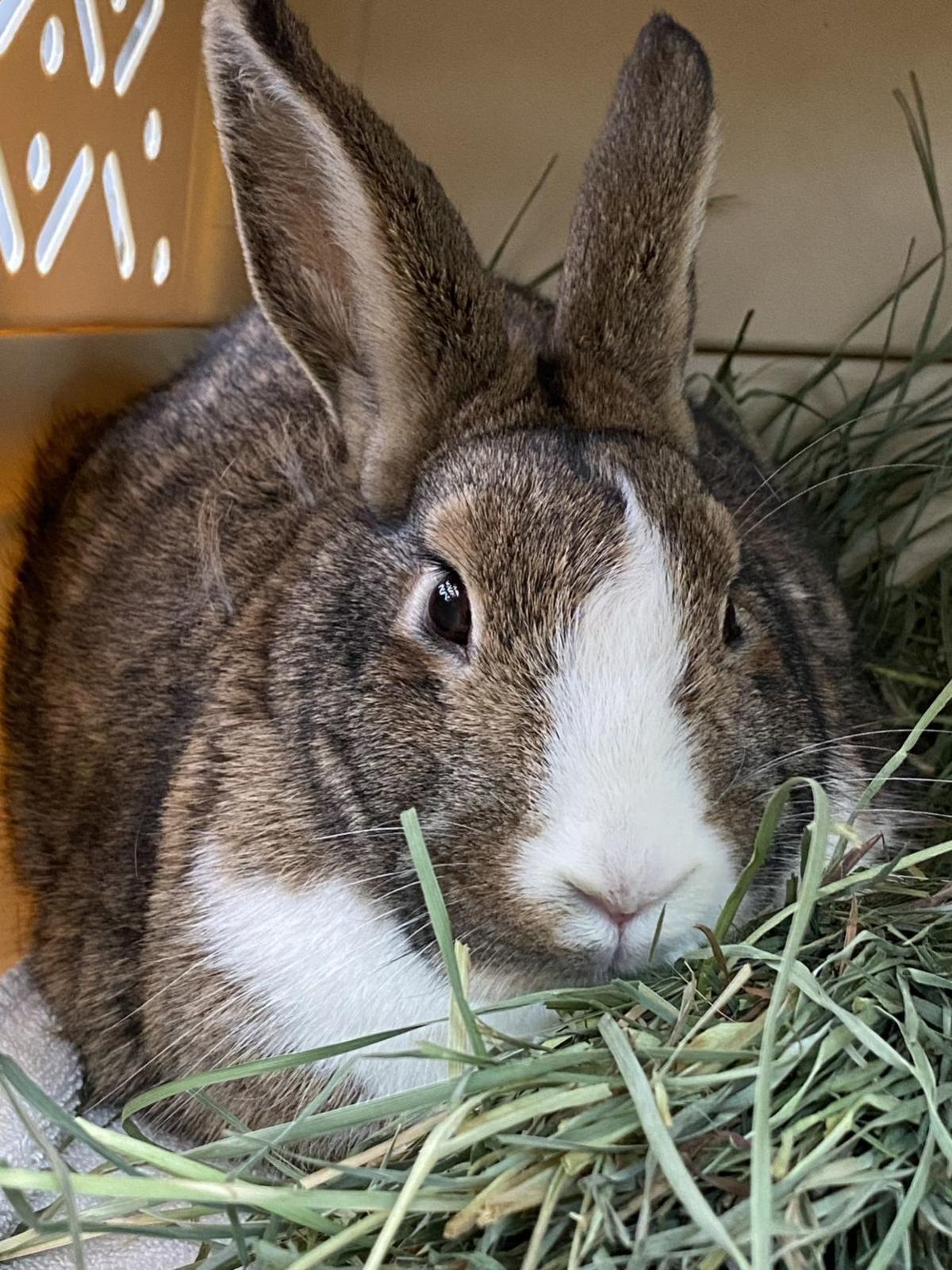 A rabbit's pregnancy lasts one month. A female can give birth to as many as 14 babies in one litter, 12 times a year

Typical rabbits spotted around the Napa Valley are jack rabbits that leap through vineyards and scurry up hillsides in a flash. Lesser known to most, are feral rabbits. These are domesticated rabbits that have either been abandoned or escaped, and quickly breed and repopulate in an area inhabited by people, which is dangerous to animals living outdoors.

Late last year, an all-volunteer team of animal rescuers assembled to save a colony of feral rabbits that established residency in a central Napa neighborhood. This effort led to the development of the Napa Bunny Colony Rescue Operation (NBCRO), founded by Nathalie Lemaire.

A journey of many decades led Lemaire to Napa. Originally from France, she adopted her first house rabbit when living in a Paris apartment with limited space. Along with her then-boyfriend, they were thinking about getting a pet.

“He said we should get a rabbit. You can litter box train them,” she recalls. “I was like OK; so next thing he comes home with a rabbit. He was a dwarf breed and a baby when we got him, we would take him everywhere. He was free roaming in our apartment. When I moved to the United States I brought him with me. That rabbit was the most well-traveled rabbit, and always part of our family. He passed away when he was 13 years and two months.”

That first rabbit created a path to animal advocacy for Lemaire. Early on, she became involved in the House Rabbit Society, a national non-profit organization that rescues rabbits and focuses on education. She has served as a donor and volunteer and always had rabbits of her own along the way.

Learning as she went, she had rabbits with illnesses such as cancer, “I learned a lot more about rabbit health. I learned about special needs and rabbit care.”

After leaving a corporate job less than three years ago, she used that knowledge to foster rabbits in need of a high level of care.

Through Lemaire’s volunteer work, she became known as a local “Rabbit Lady.” Therefore, when Jameson Animal Rescue Ranch (JARR), without in-house rabbit expertise at the time, received a call about the Napa rabbit colony, they redirected to Lemaire.

“I didn’t want to start a rescue,” Lemaire said, “I just couldn’t walk away from this. I would be lying at night in bed, thinking about the rabbits, because I knew that these rabbits were domestic rabbits. They were all youngsters and babies.”

She visited the neighborhood and began knocking on doors and talking to the residents to assess the situation and gain access to properties. Lemaire enlisted the help of Deborah Claassen, her “partner in crime in all of this” to volunteer and pick up animals, as well.

Some of the neighbors told her that usually rabbits are abandoned a few months after the Easter holidays. “Sadly, people drive neighborhoods and dump bunnies.”

Rabbits cannot fend for themselves and they can die instantly of fright. They are also prone to the elements, especially extreme heat. Other problems in the Napa neighborhood included poisoning, as well as vehicular fatalities.

Lemaire explained how fast rabbits can breed, “Their pregnancies last about one month, which means that a female can give birth to 14 babies in one litter, 12 times in one year. This whole situation had been going on for years. There could be 100 rabbits, or up to 200 counting all the babies we couldn’t see. The only reason that there weren’t more is that they were dying.”

“I figured I had to do something,” Lemaire said, “Because no one else would.” She contacted the House Rabbit Society, SaveABunny (based in Mill Valley), the City of Napa, Animal Control and the Napa County Animal Shelter.

Animal control advised Lemaire that they actually knew about the colony, but were not required to do anything by law. Stray laws apply only to dogs, which is why there are also feral cats. According to Lemaire they will not pick up animals such as cats or rabbits unless they are in distress.

To save the colony, NBCRO came up with a plan to humanely attract, catch, and then spay or neuter, to rescue the rabbits. Animal activists and rabbit lovers from all over the Bay Area gathered to help. On one day, 17 rabbits were captured and saved.

JARR provided a temporary space for shelter, though Lemaire and Claassen are now entirely on their own, seeking donations as well as investing thousands of their own dollars to set up what is an entirely foster-based rabbit rescue program. Napa Humane was instrumental in providing spay and neuter services critical for population control, with initial funding from JARR.

Lemaire reports that it has been tough, but is now taken care of. “There are over 60 rabbits that have survived,” she said. “Most are already placed in permanent homes. This is the happy part of it. This is not reoccurring at this point. I had to do this.” In recent weeks, feral rabbits have not been spotted in the neighborhood. “We may have them all!”

The goal now is to find foster and permanent homes for the remaining rabbits. Roughly 15 rabbits are available for adoption and seeking permanent human companions. Lemaire is intent upon education about domesticated house rabbits, and promoting them as companion animals that can be easily house trained and safely live indoors. Will she do this all over again?

“Yes,” Lemaire said. “I will do it all over again if there are animals in need.”

To continue rescue efforts, pay for veterinary needs and assist with fostering and adopting out rescued rabbits, the Napa Bunny Colony Rescue Operation is seeking money. Donations can be made at GoFundMe: https://www.gofundme.com/f/napa-bunny-colony-rescue-operation. For more information send an email to napabunnies@gmail.com, call (707) 690-0708 or like their Facebook page at facebook.com/NapaBunnies/.

The danger for pets in the heat is real. Just like a person, a pet can develop heatstroke, a warm-weather rash, become dehydrated and quite literally get burned. Be aware and think ahead.

Furry and Feathered Friends: The Importance of Pets in the Pandemic

May is National Pet Month, a fitting month to launch a column on pets.

This 12-week old kitten is an adventurous explorer who hangs ten on the dust mop as her foster mom tidies up!

Mama Cass is one year old and spayed and ready for adoption! She is also microchipped and vaccinated.

If you are looking to add a cat to a home with other pets, our young mama kitty Theodosia would fit in with ease!

This big 12-year old lover boy has been a true gentleman when meeting the other pets in his foster home. He is vaccinated, microchipped and ready for adoption.

Wineapawlooza, the annual benefit for Jameson Ranch Animal Rescue, is going online in 2020 because of COVID-19, but organizers promise lots of fun and surprises, virtually.

In Napa County, there are many hiking trails that wind through public parks and open spaces, ideal for exploring with pets.

This little ray of sunshine is Raegan. She is confident and outgoing and assumes that all dogs and cats she meets will be her friends (or she will make it so).

These 14-week old kittens are purrfectly delicious and they'll be ready for adoption very soon.

'Pawlooza in Place' raises more than $1 million at online event

WineaPAWlooza 2020, “Pawlooza in Place,” raised more than $1 million at their first virtual and live auction held on July 25.

Furry and feathered friends: Be ready to go when disaster strikes

While we should all have a plan for the people in our homes when an emergency or disaster strikes, a plan for pets too could be lifesaving.

These are the final two kittens available from the litter of Beach Bums, Stinson & Dillon.

McGregor wants to be friends with everyone and would love another kitten or playful cat to nibble on and play swatty swat games with!

Furry and Feathered Friends: The chicken that flew from Modesto to Napa

A chicken flew from Modesto to Napa to land at her forever home earlier this month.

Furry and Feathered Friends: The chicken that flew from Modesto to Napa

A chicken flew from Modesto to Napa to land at her forever home earlier this month.

If you already have a pet in your home, the benefits of ownership are plentiful. If not, many local animal rescue organizations and shelters across Napa County are housing cats, dogs and other species seeking forever homes.

An inspiring collaborative effort during the August wildfires saved the horses at Rockridge Ranch Equine Rest and Retirement in Pope Valley.

Cities with the most roommates

Cities investing the most in high-density housing

Cities investing the most in high-density housing

Save on these household items you can make yourself

Save on these household items you can make yourself

15 cities with the biggest rent drops since covid

15 cities with the biggest rent drops since covid

Napa Bunny Colony Rescue Operation (NBCRO), founded by Nathalie Lemaire, promotes the rescue and fostering or adoption of domestic rabbits have become feral after being abandoned or lost.

Abandoned rabbits can quickly die of exposure or fright, but they can also swiftly reproduce, leading to colonies of feral rabbits.

A rabbit's pregnancy lasts one month. A female can give birth to as many as 14 babies in one litter, 12 times a year