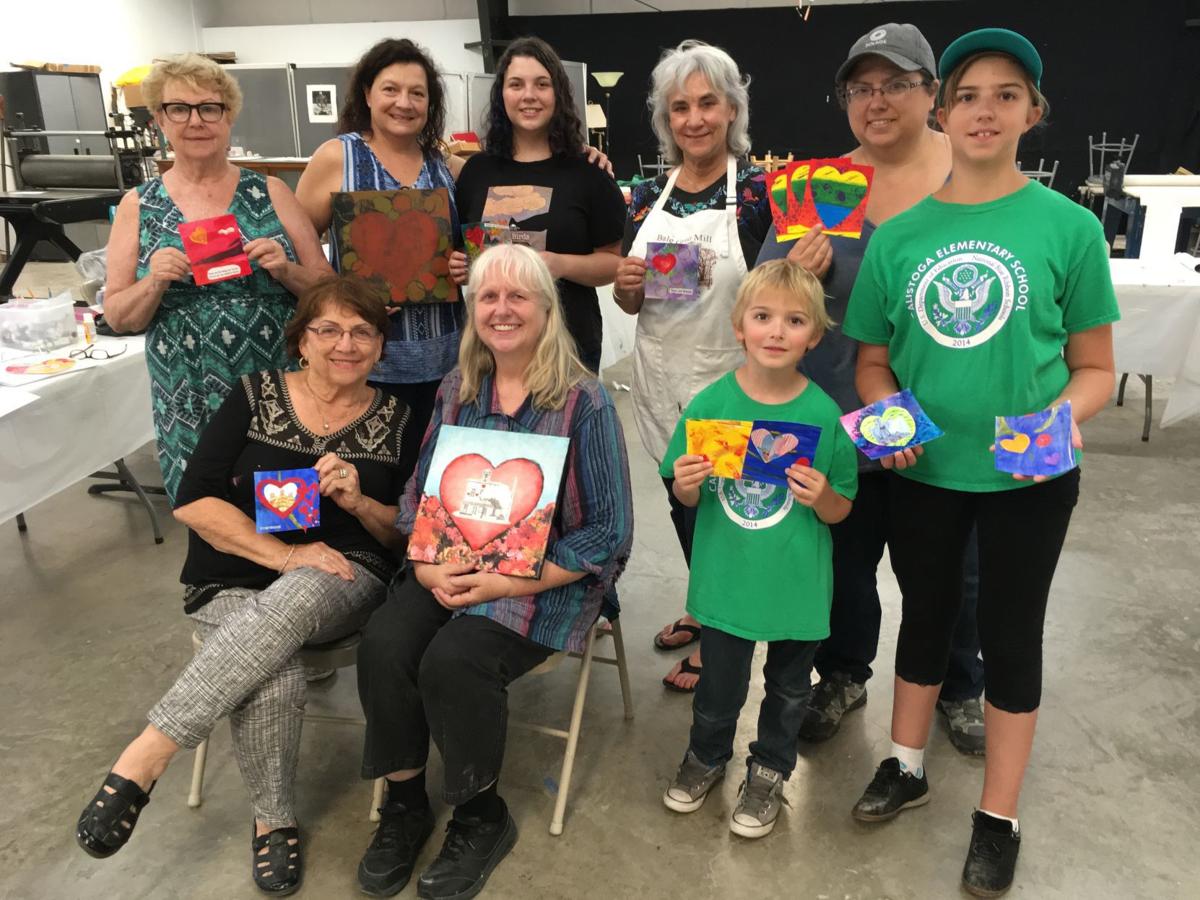 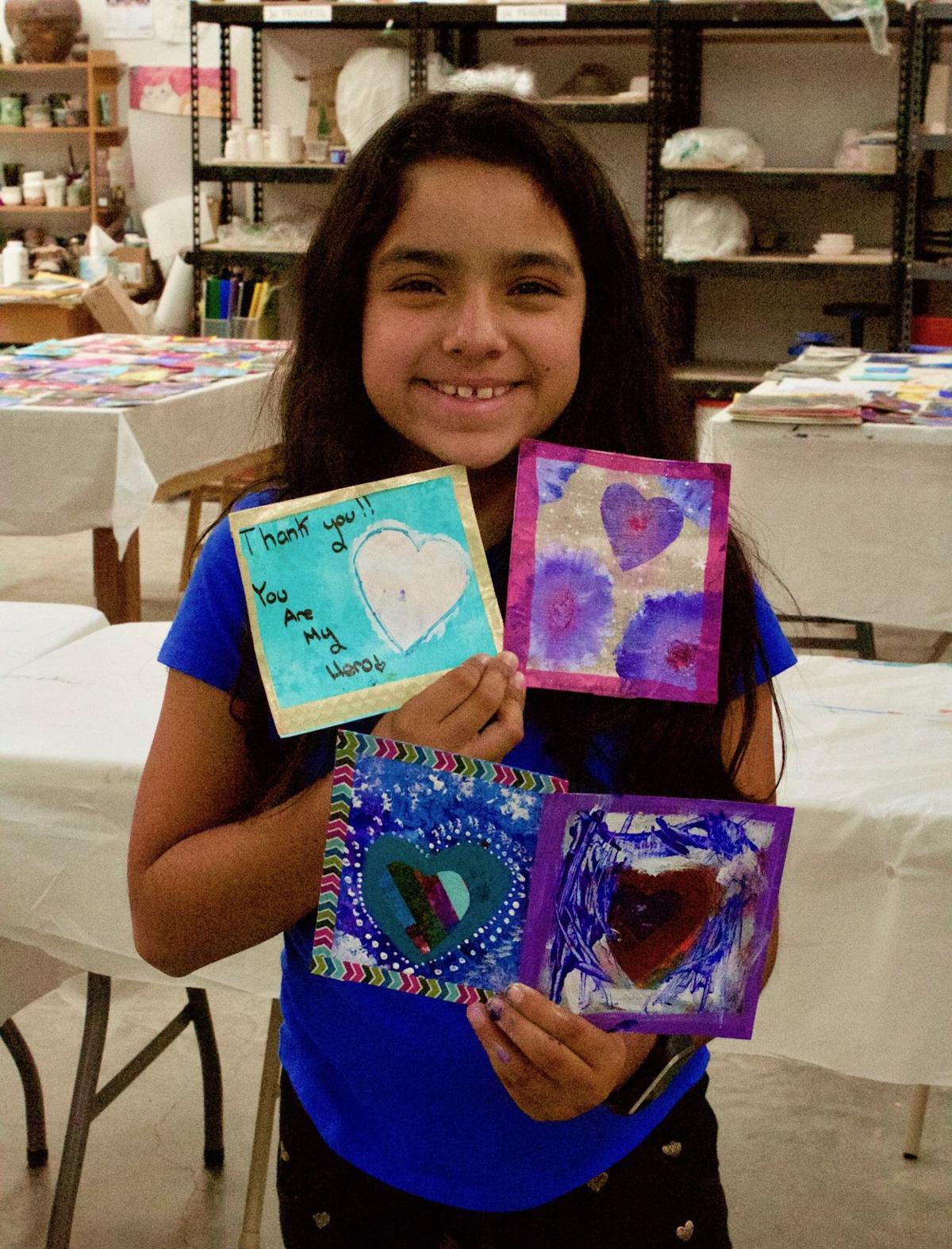 Maya Gutierrez Arriaga shows the cards she made for the Grateful Hearts project.

Grateful Heart paintings and small paintings were made into cards to be sent to the 176 mutual aid organizations from all over the country that helped in the 2017 wildfires.

How do you thank people who put their lives on the line to save yours after they’ve battled the worst wildfires in California’s history?

That was the question Karen Lynn Ingalls and her friends asked themselves after last year’s October wildfires,

Ingalls was left with the feeling they hadn’t done enough to show their appreciation to all who helped during and after the fires.

“We are grateful for all the people and organizations who helped protect Calistoga and Calistogans from last year’s fires, and who helped us get back on our feet afterward,” Ingalls said.

She noted that they left to go elsewhere “to protect our neighbors in other parts of the state.”

So began the Grateful Hearts project. It is a community-based, public art project that is an outgrowth of last year’s Hearts Across the Valley project that consisted of heart-themed artwork in downtown Calistoga and at St. Helena Elementary School, multi-lingual messages of love, kindness and compassion.

To pay for the Grateful Hearts Project, Ingalls received a grant from Arts Council Napa Valley. She has been leading workshops to create “heart art” paintings and cards at the Calistoga Art Center for the last four months.

“I can’t fight a fire, but I can make a painting for those who did to say ‘thank you,’” Ingalls said.

Original paintings have been created for 31 individuals and organizations who played pivotal roles during and after the fires and close to 200 hand-made cards, along with letters of explanation, will be mailed to mutual aid first responder organizations that sent firefighters and a truck from all over the country to help.

More than 30 people have been creating the hand-made cards and paintings. Calligrapher Curtis Winslow is doing the calligraphy on the cards. “Curtis is a wonderful calligrapher,” Ingalls said.

“It was not easy to find out who helped us,” Ingalls added. “Fortunately, at the time of the fires, there was a photographer who took photos of every truck parked at the fairgrounds. You could read the names of the fire departments on the trucks, Ingalls said. “The Calistoga Fire Department has a poster he created of all of them. I took a photo of the photos.”

From the names on the trucks, Ingalls created a list of organizations to send hand-made cards and letters to. So far, the list includes 176 organizations, but is not complete, she said. It will include all the fire departments who sent trucks and crews.

The Grateful Hearts project is now inviting the entire community to participate by signing the special hand-made cards, thanking first responders who came here from all over the country.

The signing can be done during the Grateful Hearts Art Show, scheduled for Sunday, Nov. 4 from 1-4 p.m. at the Calistoga Art Center, 1435 North Oak St. (the Cropp Building on the grounds of the Napa County Fairgrounds) in Calistoga.

Paintings done for the Grateful Hearts projects will be on exhibit at the show, and presentations of some of the paintings will also be made.

“It is so important to acknowledge the work that people did,” Ingalls said. “They worked so hard to keep us safe. For those of us who have been helped, it is especially important.”

The paintings come in two sizes, Ingalls said. Framed 12 x 12 square paintings are going to 29 people and organizations such as the Calistoga Fire Department.

“We’re still working on the framed paintings,” Ingalls said, noting that “Diane Dillon, who was knocking on doors at 3:30 in the morning to wake people up to escape the fire, will be getting one.”

Other paintings, that will be given to police and local firefighters, are 8 x 8 in size.

Everyone working on the Grateful Hearts project has been touched by the wildfire in some way, and a few of the artists lost a great deal.

Ingalls lost over 40 years of her paintings and drawings, plus supplies, equipment and studio furniture in the Tubbs Fire when her studio, located at Drawsky Ranch in Franz Valley was demolished.

Her studio, which Ingalls had used for nine years in exchange for teaching art lessons to Nicole Drawsky, since she was 7 years old, was not the only thing that burned on the Drawsky Ranch.

The Drawsky family lost three houses and five barns on the ranch that had been in their family since the early 1900s.

“Nicole and her parents, Dennis and Denise, lost everything when their place burned,” Ingalls said.

Both Nicole Drawsky and her mother, have worked on the Grateful Hearts Project with Ingalls.

“Nicole and I both went through the ashes and used them in paintings,” Ingalls said. “I did not know at the time that she was doing it, too. Nicole was mixing ashes with oil paint. I was mixing ashes and fragments of my canvases with acrylic.”

As Nicole’s long-time mentor, Ingalls is delighted that The Napa Valley Museum in Yountville has acquired Nicole Drawsky’s art “Our Ladies (of Sorrow and Spleen) for its permanent collection after it was shown in a five-county, juried art display called “First Response” that was open to high school students. Drawsky is now a freshman at Cal Poly, San Luis Obispo.

Ironically, Zurla Troeppl had called Ingalls a few months before the fire and asked her if she knew of anyone who wanted art supplies and a French easel.

“Nicole lost everything in the fire, and she loves Zurla’s easel,” Ingalls said.

Ingalls hopes that many people will come to sign their names to the hand-made cards at Sunday’s Grateful Hearts Art Show and show first responders and those who helped that the community is grateful for what they did.

For more information, go to: http:/www.heartsacrossthevalley.com/

Sign a thank-you card during the Grateful Hearts Art Show, scheduled for Sunday, Nov. 4 from 1- 4 p.m. at the Calistoga Art Center, 1435 North Oak St. (the Cropp Building on the grounds of the Napa County Fairgrounds) in Calistoga.

Get your game on Saturday, Nov. 17 at the 80th annual Bingo and Raffle Night fundraiser for the Calistoga Firefighters Association.

A happy call of “bingo” is always followed by a chorus of groans from those who were also seeking the magical sequence but didn’t achieve it, …

It was a party to be sure with live music, food and drinks at Triple S Ranch Saturday night, but the real reason people came together was to s…

Calistoga Elementary School will be celebrating reading on Monday, March 4.

Maya Gutierrez Arriaga shows the cards she made for the Grateful Hearts project.

Grateful Heart paintings and small paintings were made into cards to be sent to the 176 mutual aid organizations from all over the country that helped in the 2017 wildfires.