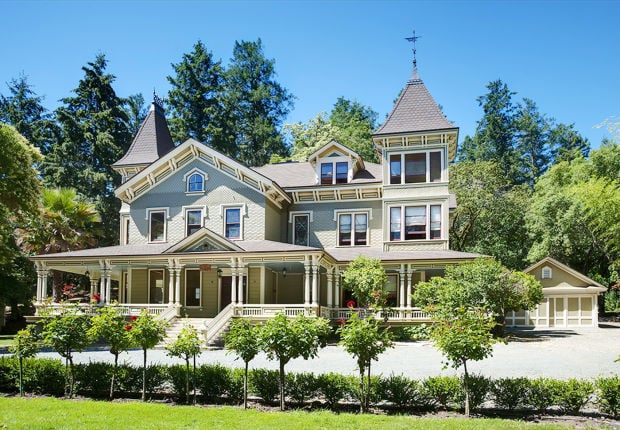 Dario Sattui has restored this Queen Anne mansion, which is adjacent to his Calistoga winery. 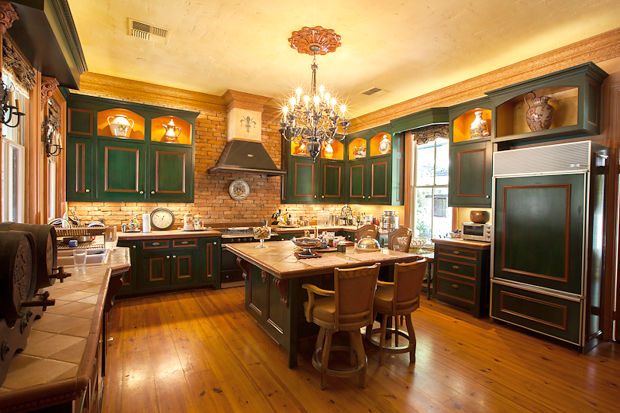 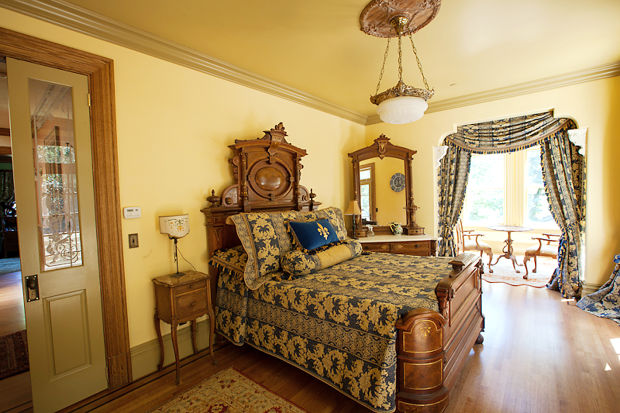 The redone bedrooms of the Villa Amorosa are furnished with period antiques. 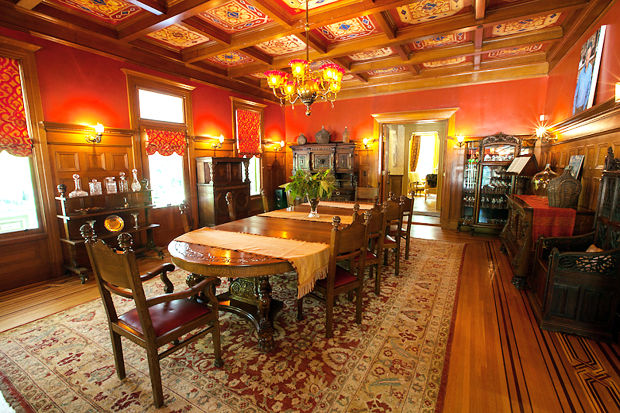 The dining room of the restored mansion is rich with period detail.

It was 1972 when vintner Dario Sattui first saw the historic Calistoga mansion that had been the location for such films as “Pollyanna” and “Killer Bees.” “I knew I would love to own and care for it,” he said.

Decades later, he has completed a $3 million, three-year-long and occasionally trying rehabilitation of the house he renamed Villa Amorosa. It sits on Highway 29 not far from Sattui’s Castello di Amorosa, Sattui’s winery that is a recreation of a 14th-century Italian castle.

The Villa Amorosa property has a rich history. A horticulturist and Bear Flag rebel planted of Napa County’s first fruit trees there and built a home in 1848 home. Napa County’s first and California’s second non-secular school was built on the property, circa 1847.

The construction of the present-day mansion was begun around 1872 Thomas and Prudence Shamp but ended abruptly with Thomas’s death in 1875. In 1900, Martin Holje bought the property and completed Villa Amorosa in 1905.

“In the 1950s, there were entertainment industry parties here with guests like Marilyn Monroe,” Sattui said.

When Sattui became the sixth owner of the 10,000-square-foot, 20-room mansion, he set out to restore its grandeur in every detail. The 171-acre property included three houses, a small stone cellar and winery permit.

“I bought this property not to build a winery but for the house, the acre and a half pond and springs” Sattui said. “The rest was an added bonus.”

Sattui had negotiated a deal with the owner Andrea Bosc with the condition that he and his ailing wife could remain at Villa Amorosa for a year.

Their two-year stay proved aggravating as Bosc sold most of the antique furnishings, original lighting fixtures and even some of the fireplace mantles. Bosc also allowed Buick to film a commercial at Villa Amorosa.

After Boscs left, Sattui’s work load and disagreements he had with his then-wife about the rehabilitation of the mansion, delayed the work for more than a year.

“While the house had been neglected and in considerable disrepair, I want to just repair it and keep things much the same,” Sattui said. “But she wanted to change a lot.”

Nonetheless, he completed two significant projects. “Replacing the old pier-and-block foundation was real expensive,” Sattui said, “But an even bigger and more expensive project was replacing the roof and repairing the third floor. They were in terrible shape and stank because of the bat guano which triggered my asthma.”

While Sattui was busy with other projects, his former wife worked on Villa Amorosa, he said. The porch was extended to create a wrap-around porch adding replicas of the original spiral posts to the new section. She added a balcony to an upstairs bedroom, and a barrel ceiling to the master bathroom. She removed a bedroom fireplace to convert two bedrooms into a walk-in closet and dressing room. She had the original dining room ceiling razed to install radiant heating. And, on contractors’ advice, additional original fireplaces were demolished and replaced with modern fireplaces. With all these changes and continual disagreements, the Sattuis parted ways.

“When it was dumped on me, it was all ripped up.” Sattui said. “Honestly, I hated it because I hadn’t been a part of it, and I didn’t like what had been done.” His frustration grew with a succession of unsatisfactory contractors and designers until, he said, “I decided to go with my ideas, for better or worse.”

Sattui made two significant exterior changes. He moved the circa 1930s-1940s cottage from behind villa to a site southwest of the house. He also added a pitched roof added to Villa Amorosa’s southwest tower. “It had an ugly flat-top roof,” Sattui said.

The now complete interior reflects Sattui’s Italian heritage as seen in the rich upholstery fabrics from an Italian company and a kitchen mural depicting a Tuscan scene from 1416, as well as artwork and bathroom tiling.

Sattui had the original fir sub-flooring covered with finished wood flooring while maintaining the original patterned wood floor borders. Sattui had a new coffer dining room ceiling created and embellished with his initials. The dining room features include the original 20-foot dining table, wainscoting, large fireplace. Two massive pocket doors separate the dining room from the new breakfast room decorated with Ira Yeager paintings. The adjoining kitchen was updated from the 1940s to a present-day design.

The three remaining first floor room evoke Villa Amorosa’s original design. “I like these rooms and especially the Italian fabrics,” Sattui said. A large gilded mirror and box baby grand piano, placed in the square bay window, are two prominent living room features. The parlor fireplace and marble surround are original. The bar is finished with wainscoting and a granite bar-top. Most of the Villa’s furnishing are antiques. “I like to shop for and acquire antiques because there is a story behind each one,” Sattui said.

The staircase was extended to the third floor to remove the original dark and narrow third floor stairs. With the second floor hallway ceiling partially opened for that extension, both floors are illuminated by indirect natural light shining through the contemporary roof-peak skylight.

On the second floor, the number of bedrooms was reduced from six to four. The smallest bedroom, named the Red Room, features one of the new fireplaces. A blue and gold bedroom offers garden views of fountains and a gazebo from its balcony and two-story tower windows.

Across the hall, the master bedroom in the northeast tower offers vistas of rose garden, fruit trees and bamboo groves. On the fireplace mantle is a pair of baby shoes. “It’s hard to believe my feet were ever that small,” Sattui said with a smile.

The fourth bedroom serves as Sattui’s home office. The new wood flooring and molding compliment the original details as well as the desk of Sattui’s grandfather and Sattui family portraits.

Just up the stairs, the third floor is all new construction with a bathroom and two large open spaces for fitness and multi-media uses. The northeast tower alcove has an unfinished ceiling to showcase its construction. From its windows, the old smoke-house and 1848 William Nash House are visible.

“At one time, this property was like a small self-sustaining village,” Sattui said. “Villa Amorosa has an interesting and diverse history. I like diversity. And I really like this house, my home.”

Master Gardeners of Napa County: Getting rid of unwanted guests in the garden

Many plants that were once landscape standbys have now proven to be undesirable for a variety of reasons.

Angela Hoxsey hopes you will use her tips to keep your winter safe, cozy, possibly fun and maybe even organized.

Christmas decor shopping guide: How to find the right decorations for you

Even though Christmas has been celebrated for centuries, you’re not restricted to decorating in the classic style, unless that’s the style you prefer.

The recent rains have softened the soil, which will make your garden chores easier.

Most contractors take their duty of good work seriously, but not all. Here’s a rundown of some of the most common scams and how to avoid them.

Dario Sattui has restored this Queen Anne mansion, which is adjacent to his Calistoga winery.

The redone bedrooms of the Villa Amorosa are furnished with period antiques.

The dining room of the restored mansion is rich with period detail.