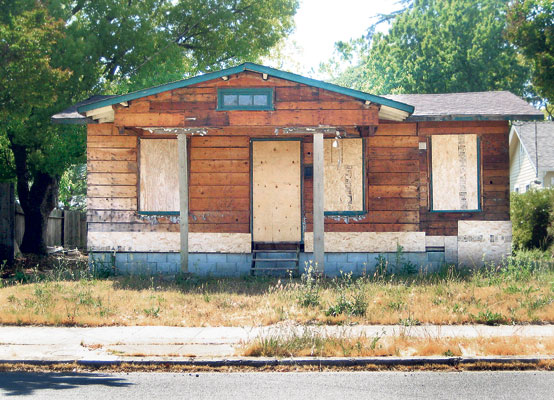 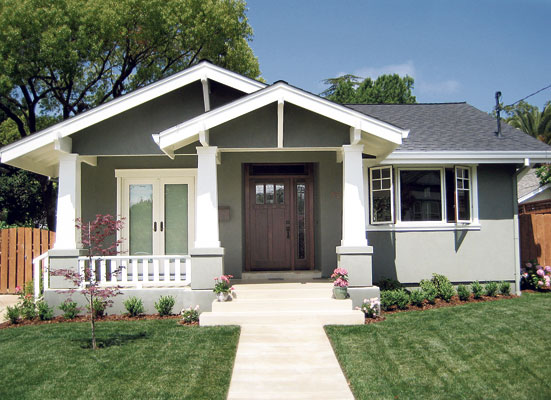 Each year, Napa County Landmarks presents Awards of Merit for projects that promote the preservation of Napa County’s architectural, historical and cultural heritage. Landmarks also recognizes a Preservationist of the Year. The 2009 awards were bestowed Oct. 11 at Clos Pegase winery in Calistoga.

“What was nice about the awards this year was that we had examples of smaller residential homes as well as multi-million dollar high profile wineries. It was a nice representative range of historic structures,” said Marie Dolchini, executive director president of Landmarks. “We encourage nominations from members and the public.”

For more information about nominations and Landmarks, visit  www.napacountylandmarks.org.

This year, the awards went to the following:

Award: Construction of a new building that is compatible with surrounding existing historic structures.

Peterson had been looking for some time for a Craftsman bungalow in downtown Napa. Finally, she ran an ad in the Napa Valley Register, and on the last day of the ad, a contractor got in touch with her and suggested a seriously deteriorated Craftsman on Patchett Street.

Peterson ended up buying the condemned house. It had extensive termite damage, and the walls had to be taken down to the foundation, with only a few original boards left. Peterson, her architect and contractor worked to build as authentic a Craftsman as possible, and on almost the original footprint have created the charming small house of her dreams. The house is also an homage to Peterson’s late husband, who did carpentry for pleasure and who loved Craftsman architecture.

The son of a prominent Santa Barbara architect, Morgan Robinson has long had a fondness for old houses, and he and Irma very much wanted to live in and raise their family in an historic house in the downtown area. They had looked for some time in this general area before they discovered a neglected house at 1797 Pine St. Originally they thought they would just do a mild remodel, but as the deterioration of the house became more evident, and  they and their architect discovered the possibilities of the house, the project became more of a reconstruction, while retaining many of its original features. According to Landmarks, “As people drove by and saw walls removed, and the house’s bones showing, they would exclaim ‘What are you doing to that house?’ But after painstaking work, the neighbors are pleased to see the comfortable family home that has emerged.”

The Wallace Building is better known to many Napans as the former House of Lights. Little is known about Wallace, who was probably a local businessman who built or owned the building. Speculation is that at one time, it was a barn or carriage house. In the 1920s, it was a residence, in the ’30’s it was home to Grahan and Hall Sheetworks. At various times, it was an insurance agency, an auto parts store, plumber, indoor nursery and tile shop. From the 1960’s until a few years ago, it was the House of Lights lamp store.

Rossi has restored the façade to a more period-appropriate look and reconfigured the interior spaces to house a spa in the front part of the building and the offices of Rossi Development company in the rear.  Although some changes were made to accommodate Americans With Disabilities Act accessibility, original window and door spaces were preserved.

Award:  Preservation and restoration of an existing historic building.

This large 1905 house served as a single-family dwelling for many years. The house next door to 1436 originally was built in the 1890s on a large lot with a barn or carriage house behind it. Later, the lot was divided into two, and the Arbor House was built in 1905 on the western part.

This was a single family dwelling for most of its history, but when the Cocilovas acquired it in 2008, it had already been converted to a bed and breakfast inn, and was in rundown condition. A small addition had been added in the 1980s.

In a matter of a few months the Cocilovas rehabbed the house and created additional rooms in the carriage house, which had been moved behind the 1436 house. They built a new garage, added to the deck and landscaped the grounds. They also brought back to life the original arbor, and took great pains to preserve the enormous sequoia tree in the front yard, which is older than the house. “As a result,” the Landmark’s award notes, “this property has undergone a phenomenal transformation, but preserves the look of a much earlier time.”

Award:  Rehabilitation or adaptive reuse of an historic building.

Built in 1857 the Old Hardin Schoolhouse served Pope Valley as a one-room schoolhouse. Later it was expanded to a two-room school until it closed in the 1970s. Over the years, several owners gradually converted the school to a residence. A number of substantive improvements were made by the next-to-last owner, Robert Magilligan. On trips to the Napa Valley, Paul and Alice Carey had long admired the old schoolhouse. When it became available in 2003, they purchased it and set out to return it to the more unified appearance of a one-room school that is also a charming country retreat.

Award:  Preservation or Restoration of an historic building

The 1884 Rhine House, a 17-room mansion built by Frederick Beringer, is on the National Register of Historic Places. In order to meet the requirements of the St. Helena Unreinforced Masonry Ordinance, and as the final piece of a master plan for the historic site designed to reduce visitor impact, the Rhine House underwent seismic strengthening and extensive restoration. The 41 stained glass windows were restored — 14 had to be removed for treatment and reinstalled. Hand-stencilled decorative paintings on the main room walls that had been hidden under decades of layers of wallpaper were revealed and restored. Also restored were the inlaid parquet flooring and hand-carved woodwork and wall paneling.

Award:  Preservation and restoration of an historic building

The two-story masonry Sherry House was built in 1880 to house a sherry-making operation. The Depot Saloon, with a stone ground floor and a wooden second floor, was built in 1886 to cater to travelers from the neighboring railroad depot. The two buildings were only a few feet apart, and sometime before 1899 they were connected by a small structure. Over the years, the buildings have been used in various ways, some more colorful than others.

Reg Oliver, a longtime board member and benefactor of Landmarks, owned the building for many years, and when he passed away, Marie Oliver and her children were required to do a seismic retrofit on the structure and to make ADA accessibility improvements.. The difficulties were substantial, but every effort was make to preserve the historic fabric and character of the buildings, while providing handsome office suites. The Depot Saloon side is now the offices of retired Superior Court Judge Scott Snowden, while the Olivers retain use of the Sherry House.

The new Zeller building replaces an older building at this site. It occupies approximately the same footprint and houses mixed commercial uses. Features such as a small tower have been added “as a sort of homage” to the older buildings at the other end of the street. The alleyway between the Zeller building and its neighbor on the west has been widened and made more attractive to pedestrians

Landmarks noted, “This award is something of a departure for Landmarks, but on the whole we feel this building is an example of appropriate infill.”

Rubicon owner Francis Ford Coppola fulfilled a promise when he demolished the unsightly 1970s barrel building on the grounds of the historic Inglenook (now Rubicon) winery.

Rubicon Estate was founded as Inglenook in 1880. In 1975, the Coppolas purchased part of the original Estate, including Captain Niebaum’s Victorian mansion, carriage house and 1,500 acres. The same year, the owner of the remaining piece of Inglenook, erected a large barrel storage building in front of the historic chateau, blocking the view of it from Highway 29. The Barrel Building became a lightening rod for uncontrolled development and galvanized the community to adopt further regulations to protect the valley’s heritage.

In 1995, Francis and Eleanor Coppola purchased the remaining portion of the estate. Coppola had wanted to destroy the Barrel Building and restore the original vistas since he assumed ownership

“Few things that are split apart are ever put back together,” he said. “The demolition of the Barrel Building is the final step in the restoration of the estate to its original dimension.”

Master Gardeners of Napa County: Getting rid of unwanted guests in the garden

Many plants that were once landscape standbys have now proven to be undesirable for a variety of reasons.

Angela Hoxsey hopes you will use her tips to keep your winter safe, cozy, possibly fun and maybe even organized.

Christmas decor shopping guide: How to find the right decorations for you

Even though Christmas has been celebrated for centuries, you’re not restricted to decorating in the classic style, unless that’s the style you prefer.

The recent rains have softened the soil, which will make your garden chores easier.

Most contractors take their duty of good work seriously, but not all. Here’s a rundown of some of the most common scams and how to avoid them.

This is no insect pest or disease problem. These branches have been nipped off by squirrels.