The 2020 Award of Merit recipients will be formally announced during NCL’s annual meeting, held via Zoom at 1 p.m. on Dec. 12. It is open to the general public. To participate, visit info@napacountylandmarks.org.

While this year’s roster of seven recipients, their respective projects and historic preservation categories, vary from one another, their ultimate goal and outcome is the same: safeguarding the cultural landscape and heritage of Napa County, the core mission of NCL, a local non-profit organization.

“The Awards of Merit is a traditional, long-standing NCL program created not only to recognize the historic preservation efforts of property owners and others but also to inform the community-at-large of the importance and role of historic preservation,” Ernie Schlobohm, NCL president, said.

“This year’s slate of recipients is more balanced than in previous years,” Schlobohm added. “We have a broader cross-section of architectural eras and uses to include a mid-century modern residence and a building originally designed and continues to function, as a commercial use building. The 2020 Awards of Merit will also feature a Preservationist of the Year recipient, an underrepresented category in years past.”

The process of selecting the winners begins with nominations generated by both the NCL membership and the general public. “Each nominee is thoroughly vetted to assure they met the criterion for their nominated category or categories,” he said. “This review process takes place in-house via our board of directors and PAC, Preservation Action Committee, members. We also contact the property owner to receive their permission to proceed with their property’s nomination and selection process.”

This year’s Awards of Merit recipients are:

Located in south-west Napa, the house is a remarkable local example of a mid-century modern style residence, featuring a cutting-edge design for its time, the 1950s. Oriented on its one-acre parcel to take advantage of the sun’s path, the Telesis House utilizes passive solar design and radiant heat, warm-water, sub-flooring system to create year-round interior comfort. Constructed of concrete, old-growth redwood and glass, the Telesis House retains 90-percent of its original materials and design with only minor changes to its interior.

The current owners, Katherine Lambert and Christiane Robbins, listed under their business’s name of Metropolitan Architectural Practice (MAP), have made every effort to preserve and honor the original design and intent of the property. With this in mind, the Telesis House fulfills the criteria of the Award of Merit in category 1.

The Gordon Building was constructed in 1929 for Sam Gordon, Sr. as a retail-commercial use building. This two-story Spanish Colonial Revival style building with all of its glazed exterior tile and architectural details was severely damaged during the 6.0 South Napa earthquake on Aug. 24, 2014. Its level of damage was so extensive the building was “red-tagged,” prohibiting public access and use.

This unreinforced masonry (URM) building with all of its tile, masonry, lath and plaster elements and details was essentially reconstructed, requiring new structural support systems, system upgrades to meet current codes, restoration of historic details and much more. The rehabilitation of the Gordon Building, begun in 2016, preserved and restored the historic building to its former architectural glory while improving its seismic and infrastructure safety.

Owned by Zapolski Real Estate, the primary contractor of this project was Wright Contracting, LLC with Napa Design Partners orchestrating the restoration. The successful results of this project fulfill the criteria for categories 1 and 2.

Located near Fuller Park in Napa, this Craftsman-style residence, built in 1900, was originally designed as a modest-sized, single-family residence. It was converted into a boarding house for a brief time, and following its return to a single-family unit, it received a substantial addition and other modifications as part of its rehabilitation. As a result, 405 Jefferson St. is an Award of Merit recipient under category number 2. The owners of this property are Kelly and Art Reyes.

Built in 1897 as a one-story, single-family house, in the 1920s, the modest cottage was lifted from its foundation to allow for the construction of a new first floor. Once completed, both the old and new levels served as apartments. Eventually, it was converted into office space, including housing for the local non-profit, the COPE Family Center. They rehabilitated the building in 2005, which resulted in COPE receiving a category number 2 Award of Merit for that project.

The current owners, Paula Key and John Murphy, recently completed an extensive restoration of the building’s interior. The quality and degree of this preservation effort qualify the property for a category number 1 Award of Merit.

Also known now as the 1881 Napa Wine History Museum, the house was built in the late 1800s. The two-story building is historically known as the Durant-Booth-Giugni House in honor of the three longest owner/residents of the house and nearby mercantile, the Oakville Grocery.

Recently, the current owner, Jean-Charles Boisset, had the interior of the house altered to convert it into the 1881 Napa Wine History Museum. Two of its main features are a timeline of Napa Valley’s winemaking heritage as well as a tasting room. With the completion of this project, the property qualifies for a category number 2 Adaptive Reuse Award of Merit.

Built in 1922 in the Spanish Colonial Revival architectural style, served as a public school until 1965 when it was abandoned following the construction of new facilities on the property. It was briefly threatened with demolition in 1967, only to remain neglected for decades.

Nearly a century following its original construction, the Salvador Union School had been restored and preserved to serve once again as an integral part of a school campus for the River Middle School. Owned by the Napa Valley Unified School District, the Salvador property meets the criteria for the Award of Merit category number 1.

Rob Grassi, 2020 Preservationist of the Year Award of Merit

In order to qualify for this distinction, an individual must have made extraordinary efforts and impactful contributions to protecting and preserving the cultural heritage of Napa County. Grassi, an expert millwright, used traditional methods and materials to restore the Bale Grist Mill waterwheel. His work is considered to be paramount to the preservation of the Napa Valley landmark.

“The significance of historic preservation is protecting the living, or rather surviving, physical history that embody and convey Napa County’s cultural heritage as well as the legacy and quality work of tradesmen, artisans and visionaries from our past,” Schlobohm said. “These repositories of our heritage can be a structure, site or landscape.”

“Our efforts have included campaigns to save a historically significant property as well as celebrating it as part of our various events and programs, such as our walking tours and Awards of Merit, ”Schlobohm said. “We openly invite, welcome, and encourage the community to submit Award of Merit nominations.”

For the nomination forms and information, visit the Landmark’s website, napacountylandmarks.org.

WATCH NOW: HOW TO HAVE A COZY QUARANTINE HOME THIS WINTER

CHECK OUT NAPA’S MOST EXPENSIVE HOME SOLD IN NOVEMBER

While it was a serious matter, Prohibition and its enforcement did indirectly inspire an amusing local legend, the story of the old soaked oak.

Affectionately known by Napans of his era as “Jovial Joe” and “Mr. Mayor,” Greco served his adopted hometown of Napa as a progressive councilman and mayor.

The operators of St. Helena's Native Sons Hall are hoping donations will help the hall scrape by until indoor gatherings can resume.

Anthropologie will open in downtown Napa in mid-2021.

Rebecca Yerger recounts past New Year's activities in Napa, including the mud bowl of 1900.

When the Cavagnaro family moved to Napa in 1882, the town was 35 years old, Dave Cavagnaro grew up with Napa, becoming one of its leaders who, among other things, helped bring circuses to the town.

The Napa Valley State Parks Association is inviting the public to celebrate the 175th anniversary of the Bale Grist Mill and the restoration of its water wheel on Saturday.

The grandeur of one of Napa Valley’s most iconic parks is now on state and national records as a place of historic significance, ensuring its preservation for generations to come. 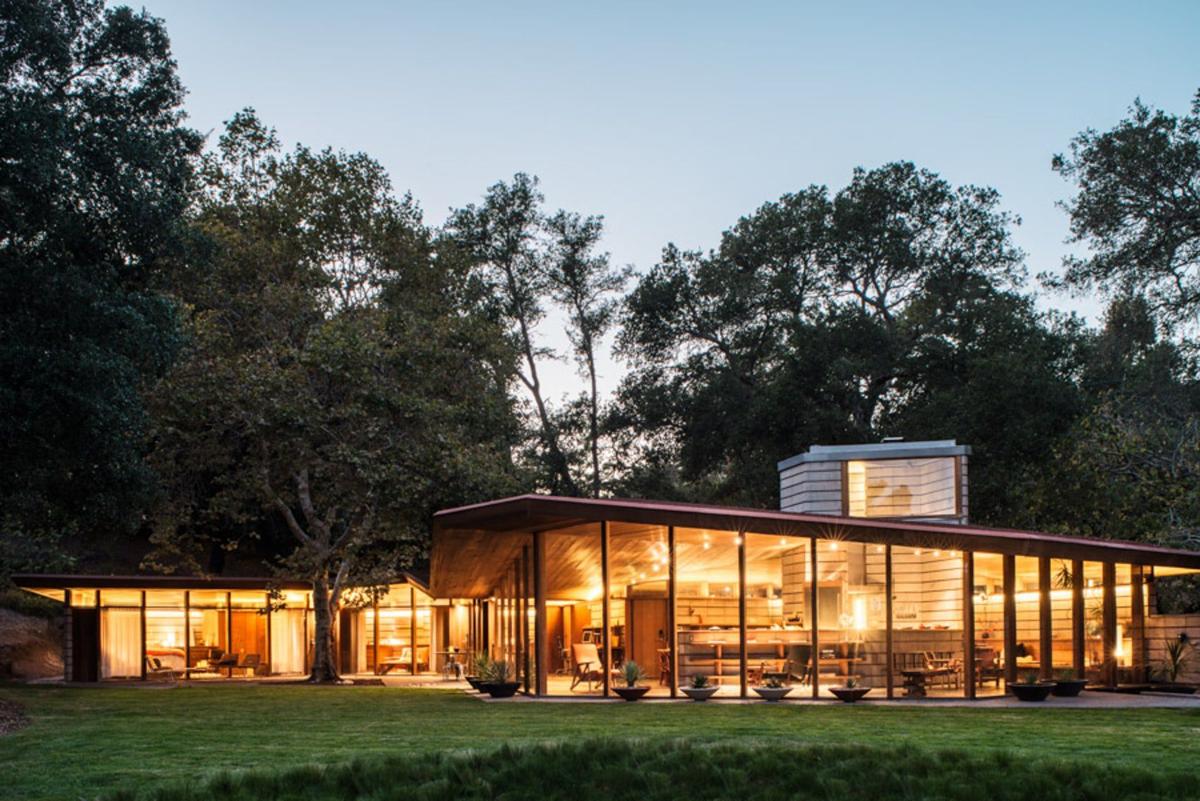 The mid-century modern Telesis House is one of Napa County Landmark's Awards of Merit choices for 2020. 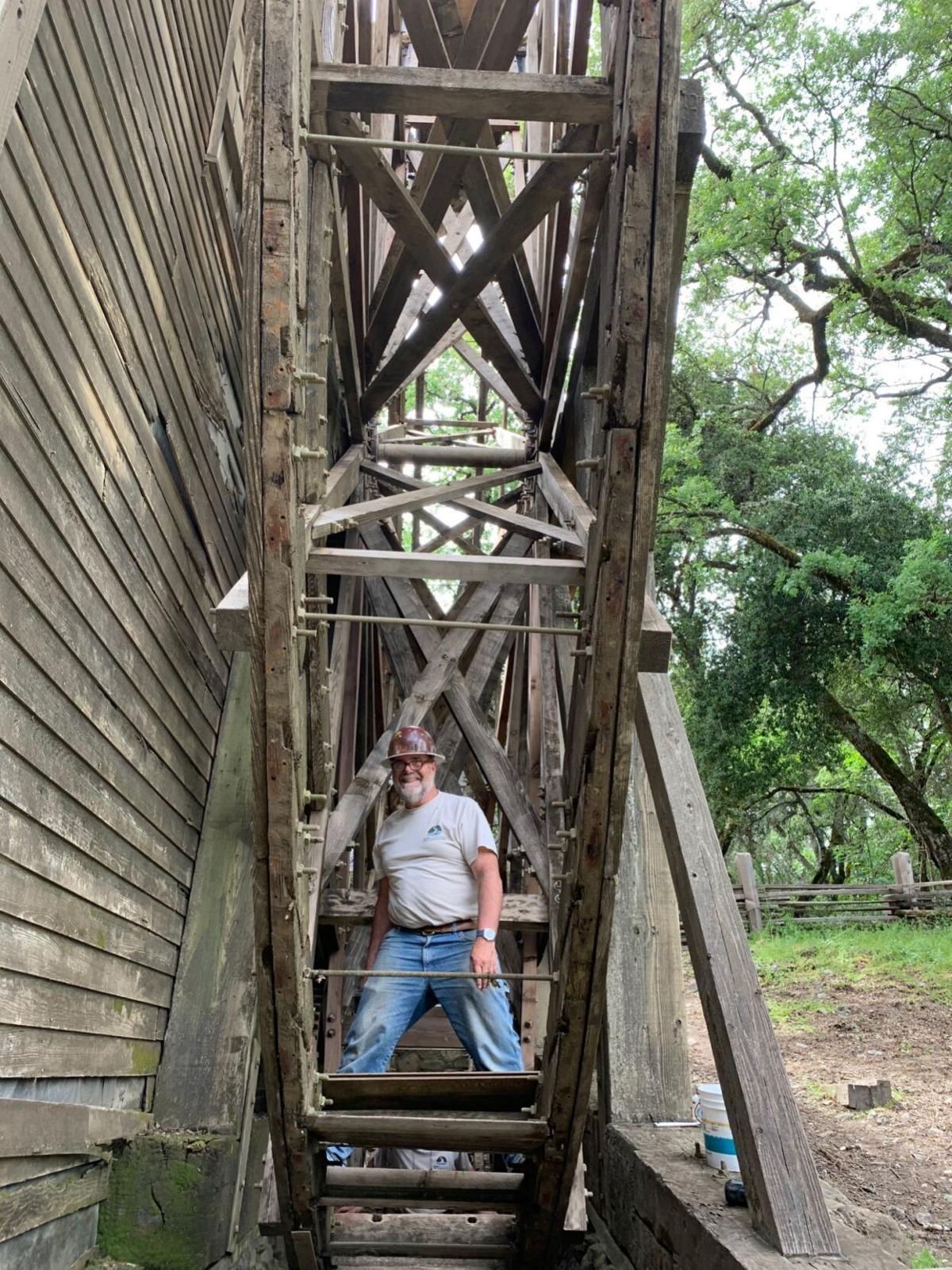 Rob Grassi, shown here in the waterwheel of the Bale Grist Mill, was named Preservationist of the Year in 2020 for his work on the historic Napa County landmark. 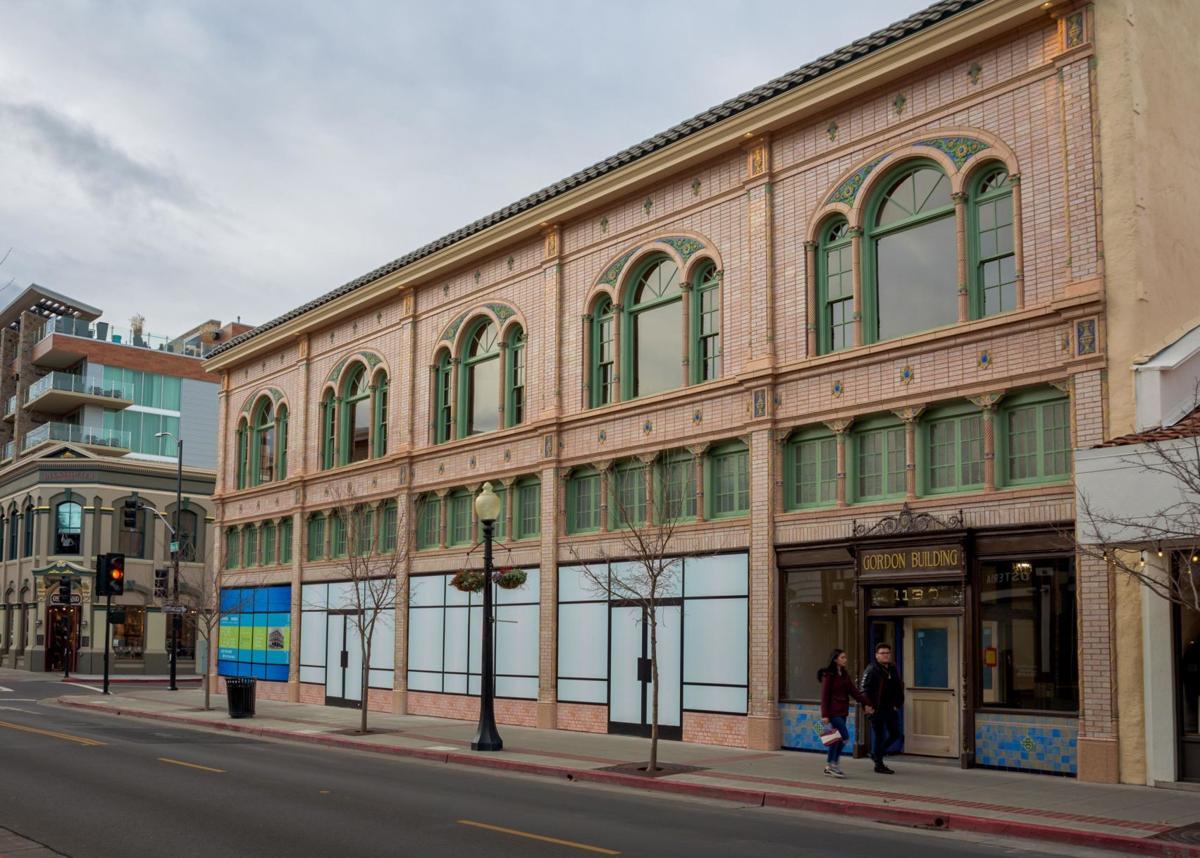 The 1929 Gordon Building, badly damaged in Napa's 2014 earthquake but now restored and retrofitted, is another 2020 recipient of an Award of Merit. 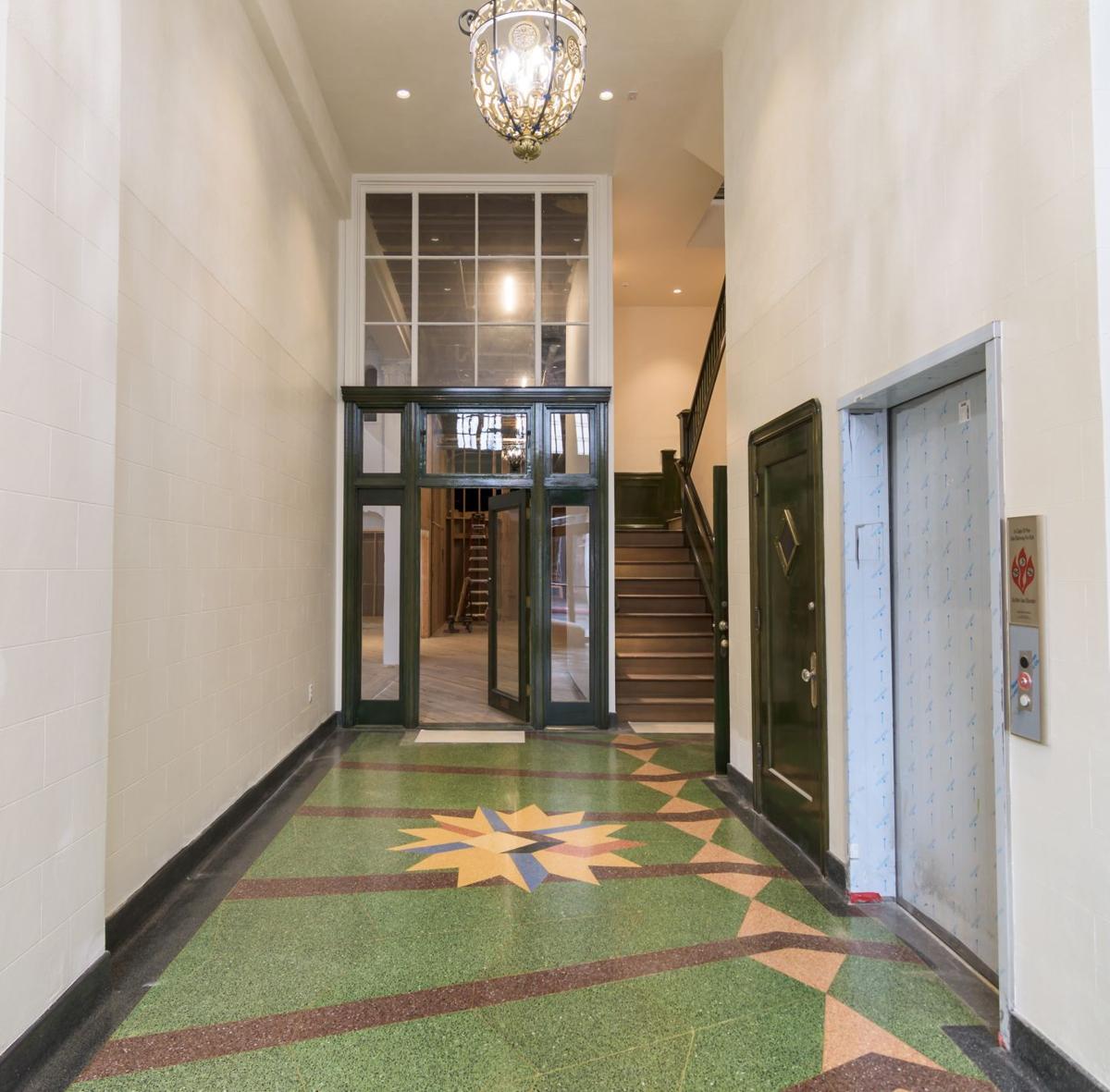 The lobby of the renovated Gordon Building.

The Salvador Union School building, an example of Spanish Colonial Revival architectural style, was built in 1922. Nearly demolished in 1967, it is now restored and back in use.