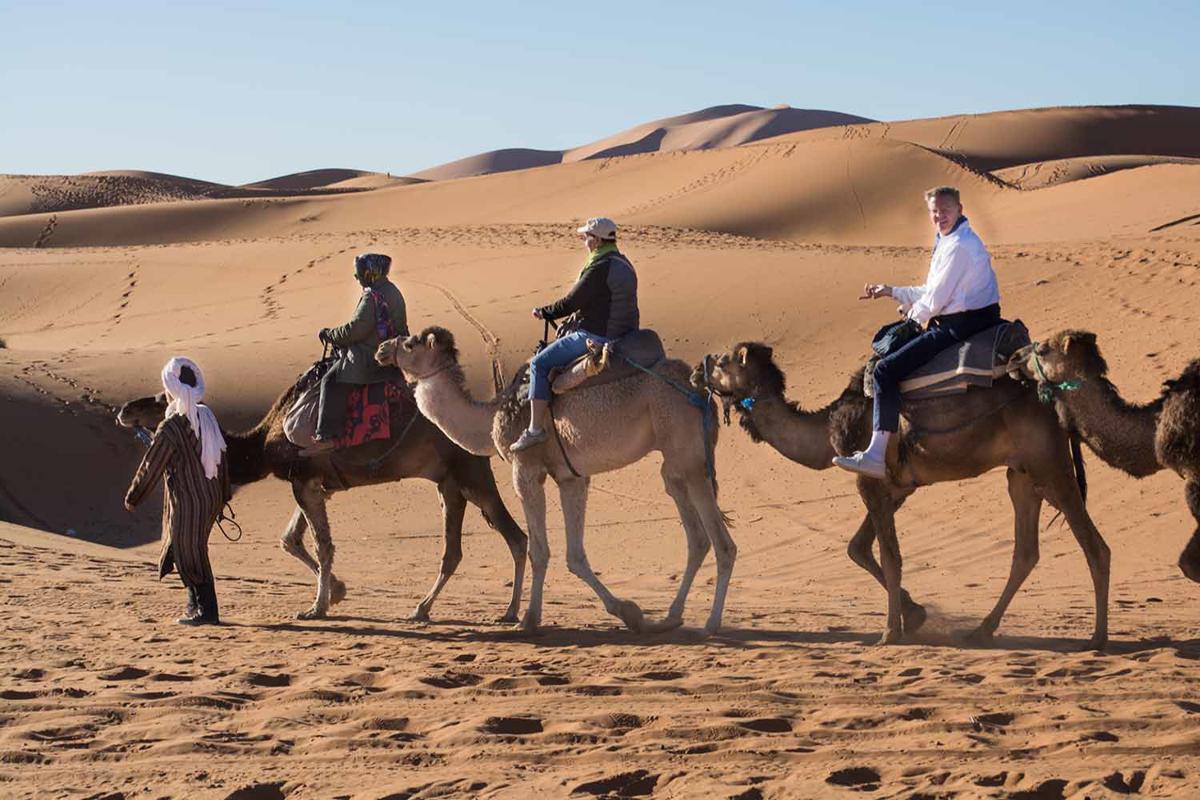 We traveled by camel through the Moroccan desert. 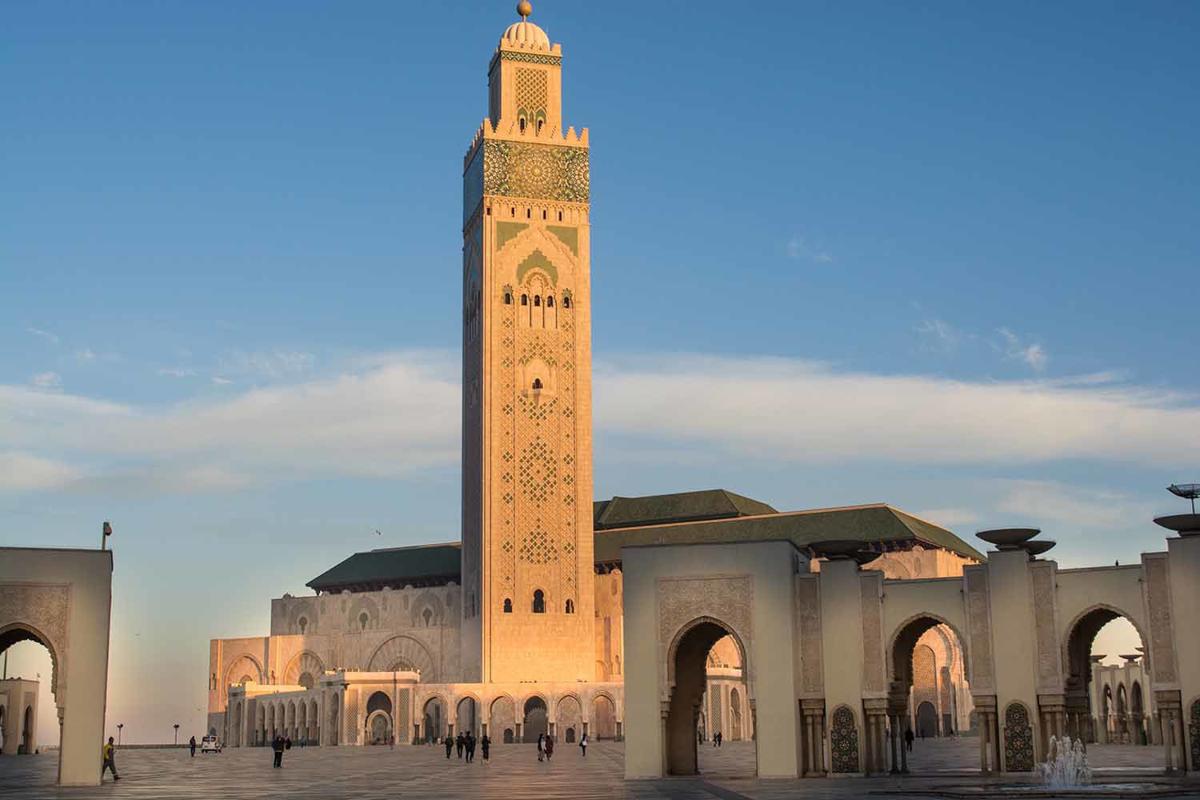 The Hanns II Mosque in Casablanca. 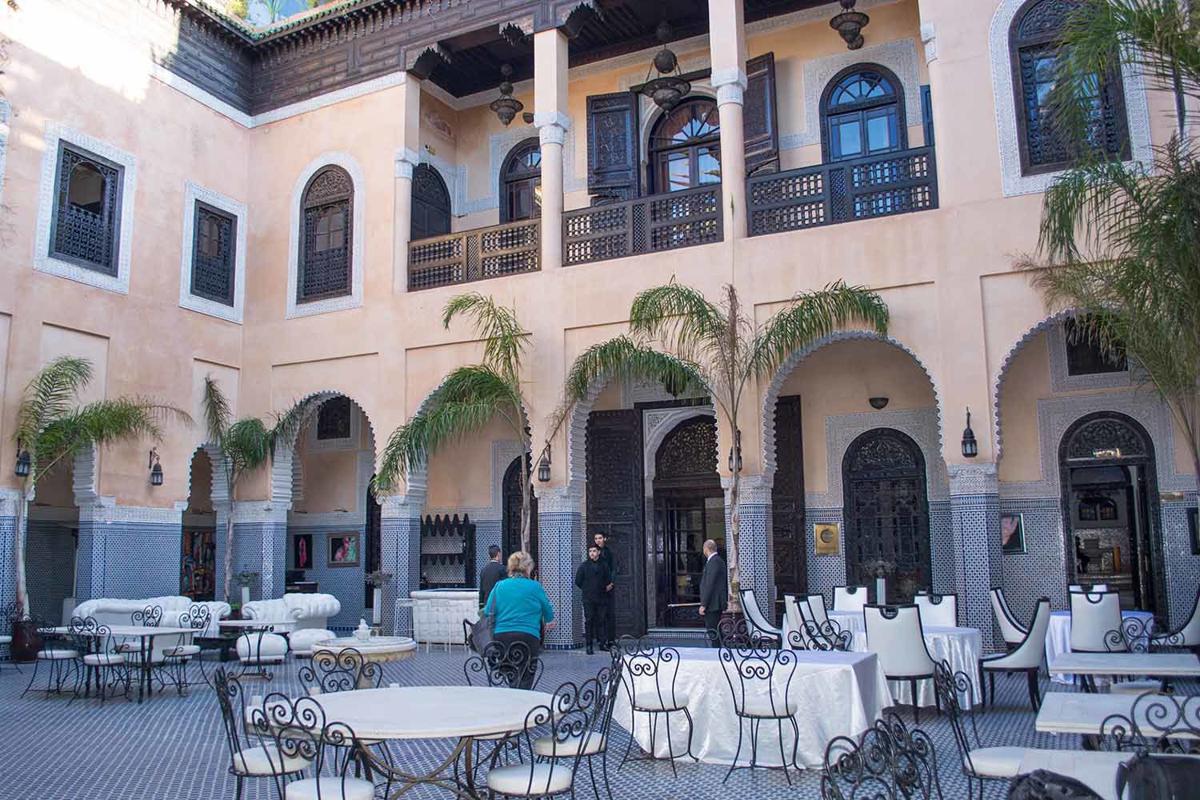 This is the Palais Shererazade in Fes. 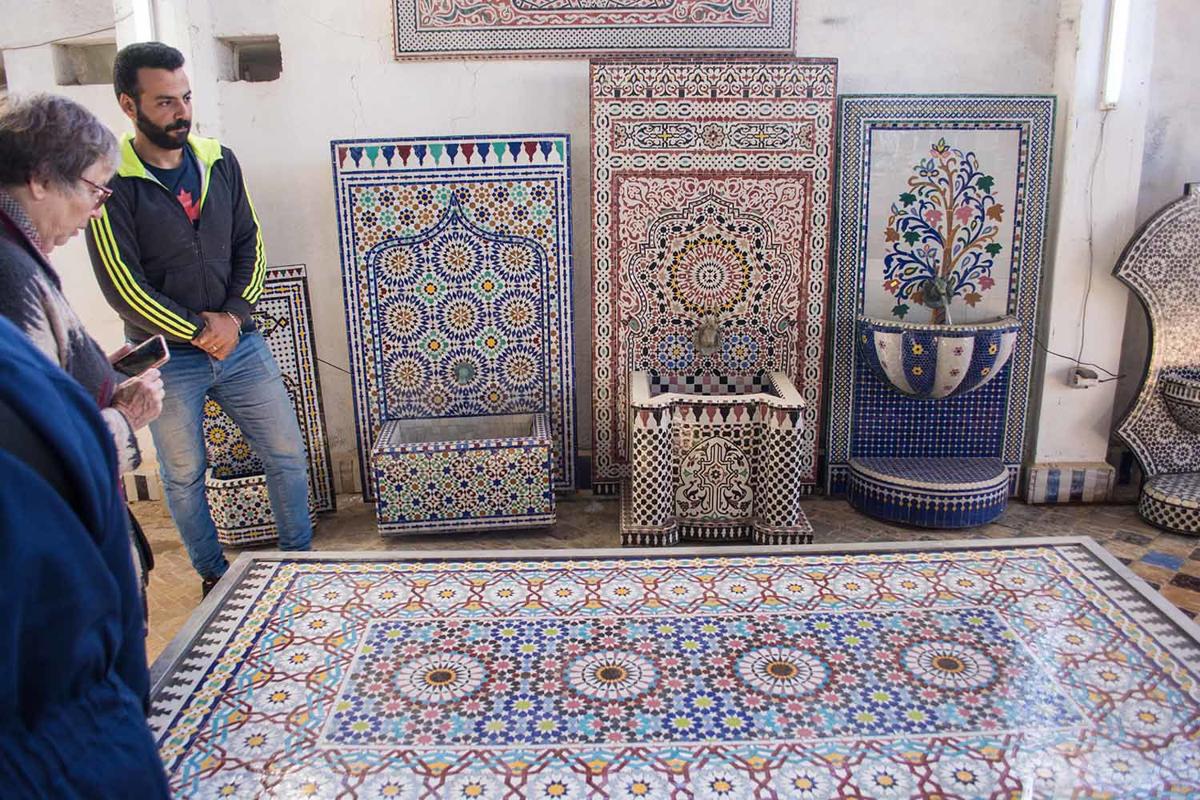 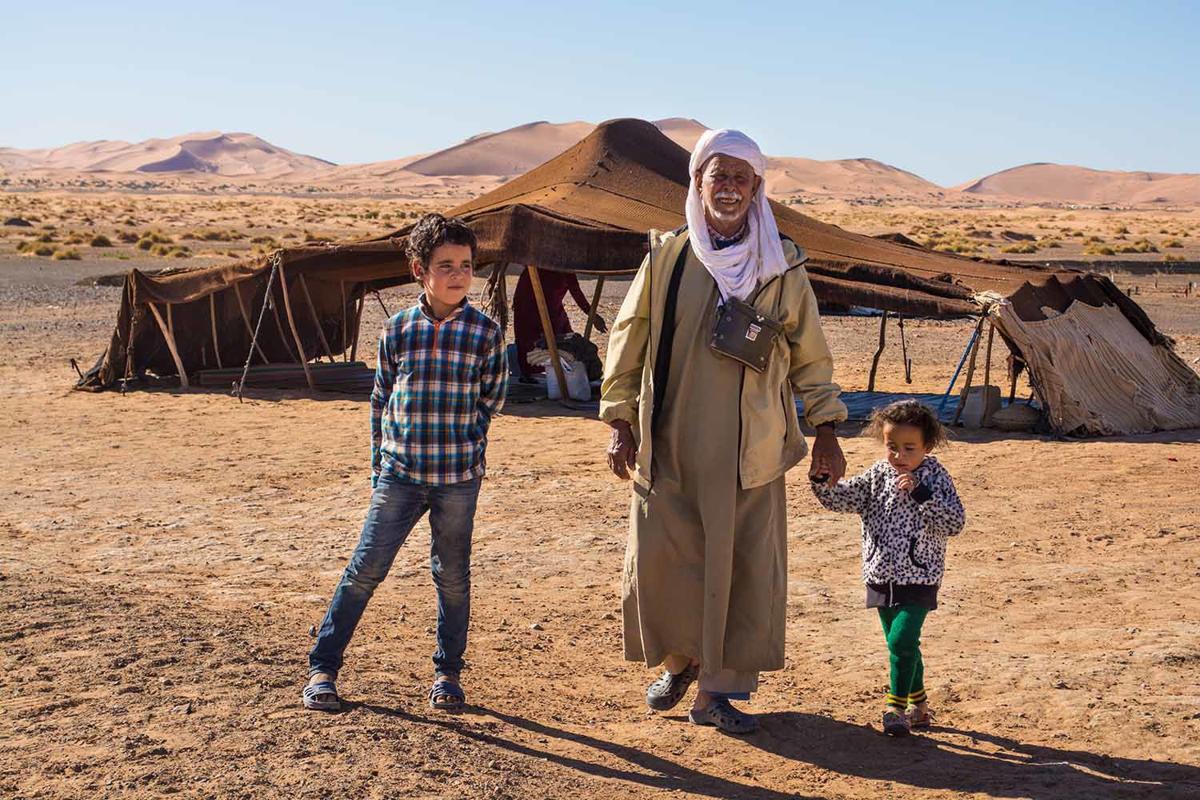 A nomadic family in Morocco. 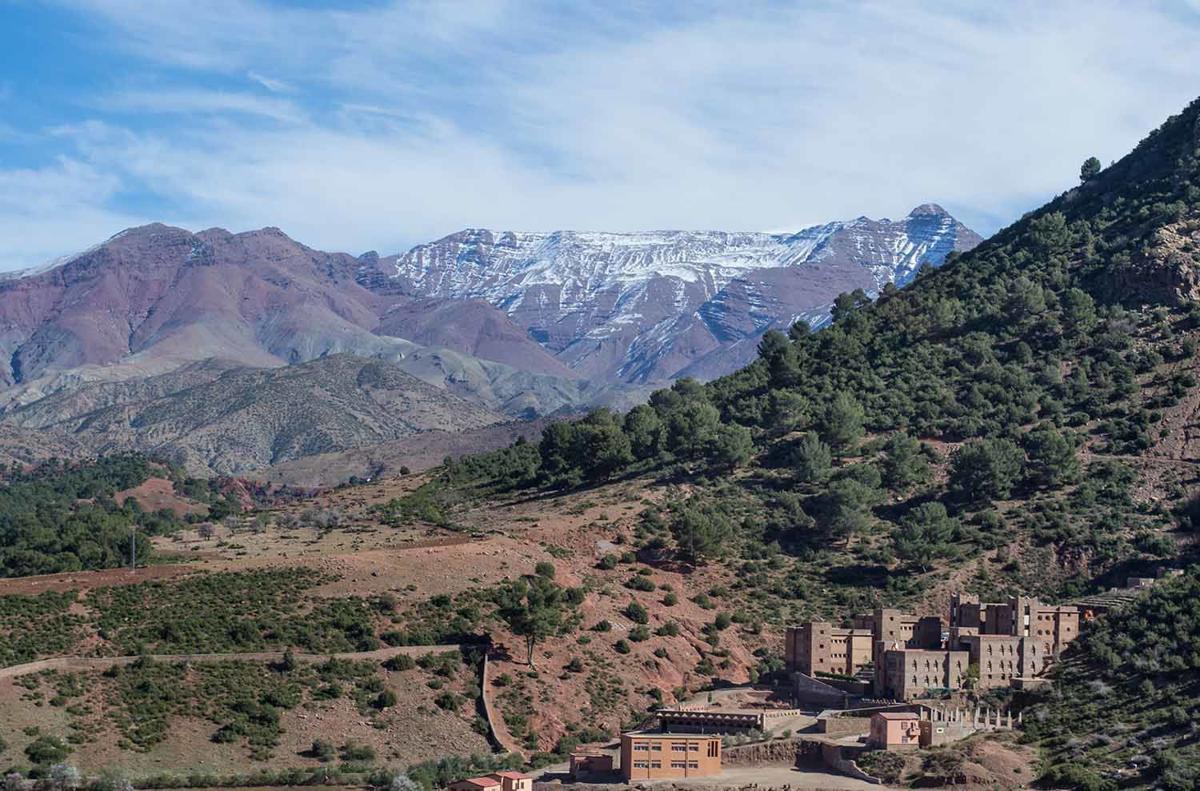 These are the Atlas Mountains. 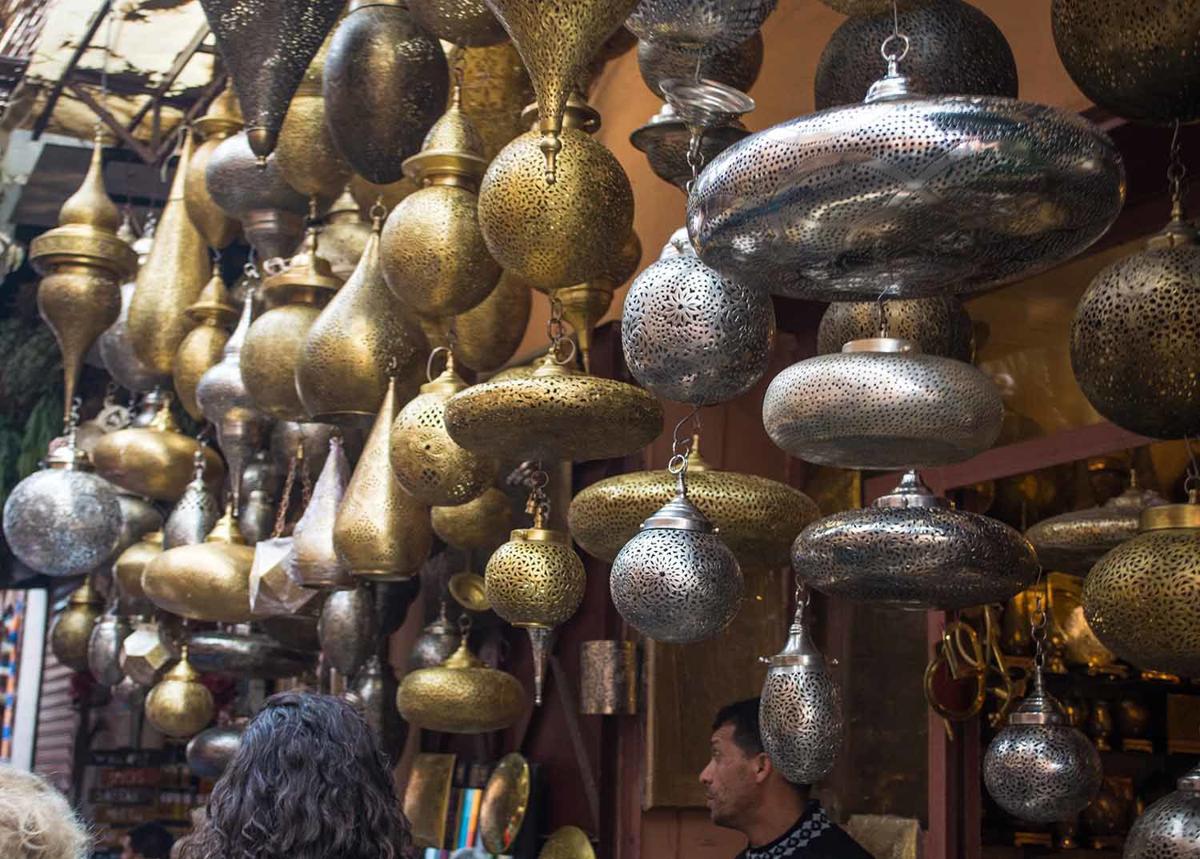 Lamps for sale at the medina, the old part of Casablanca.

Until recently, my knowledge of things Moroccan was limited to delicious food eaten without implements while sitting on a floor cushion and watching belly dancers. I imagined a land full of deserts and camels and not much else. That all changed with my recent participation in a Napa Valley College Trips and Tours excursion.

My first surprise was the mountains, which we had to cross by bus to get from Fes to the desert and then again to finish the tour in Marrakech. The snow-covered Middle Atlas and High Atlas Mountains thrilled with sweeping vistas, tiny villages tucked in valleys, fields and fields of sheep accompanied by their shepherds, just-blooming almond trees, and the occasional semi-nomadic encampment.

I realized early in the trip that Morocco shares a lot with California in terms of geography, climate and population size. Thus the vegetation is familiar: olive, fig, citrus trees and date palms. In early February it was warm in the daytime in most places and cool at night, with the desert having more extremes of both.

Our tour began in Casablanca, which has a population of 3.5 million and is the financial capital of the country. We were there just one night, but had a chance to experience the local medina — the ancient part of the city with alleyways full of merchants for food, clothing, jewelry and just about anything else you can think of.

Someone we met in the market took us to a shop that processes and sells oil from the kernels of the argan tree. Moroccans use argan oil for cooking as well as for cosmetic products. Our first dinner included my favorite dish, pastilla. It is a pie made with phyllo dough, stuffed with chicken, eggs, cinnamon, and sugar.

In Casablanca, we visited the Hassan II Mosque, the largest mosque on the African continent, built to honor the king who died in 1999. It can accommodate 25,000 people inside for prayer and another 80,000 outside on the grounds.

On our way to Fes, we stopped briefly in Rabat, the political capital. All over the country, we were shown the exterior of current King Mohammed VI‘s many palaces. Nobody is allowed inside and nobody knows where the king is at any given time. In Rabat, we also saw the mausoleum of two prior kings, a beautiful building with mounted soldiers in red uniforms guarding the coffins inside. We arrived in Fes to discover our hotel was a beautifully restored 19th century palace or riad.

Fes is the oldest city in Morocco with a population of 1.5 million. Its 9th-century medina has 9,000 different passageways. It is so big and congested we were advised to not go there alone for fear of not finding our way out.

Following our local guide, we saw for sale camel meat, expensive gold jewelry, cloth, and every color of olive you could imagine. As payment is often expected in exchange for a photo, the guide tossed hard candies to many of the vendors, to keep them from protesting the invasion of camera-wielding tourists. As we walked the narrow passages, single-file and staying alert for burros or motorcycles coming from the opposite direction, we saw doors behind which are homes, restaurants, gardens, even palaces, all part of the medina.

The shoppers in our group especially enjoyed the ceramics factory, where we watched the meticulous work that goes into hand-cutting tiny pieces of glazed clay, then placing them on a drawing to create impressive mosaics of color and design. After seeing potters creating art on their wheels, we were invited to shop the finished products.

Another stop in the medina was a leather factory, where many items are made from goatskin that is processed and dyed with all-natural products, including pigeon droppings. The finished pieces are colorful, soft and beautifully crafted.

Also in the medina, we visited an ancient university now used as a mosque and a madrassa, which the guide explained is just the word for a school. Everywhere we went, merchants spoke enough English to make a sale, and almost everyone spoke French, so language was not a problem.

After two nights in Fes, we were on the road again, heading into the mountains towards the desert. After a long day, we arrived in Merzouga just as the sun was setting. Once on the desert, we immediately began picking up fossil rocks. They are everywhere and there is no prohibition against taking them home. The ride to our camp was an adventure of its own. We piled into five four-wheel drive vehicles, which then sped across the dunes, over hills and around curves in the roadless landscape, while we bounced up and down for nearly half an hour.

We were greeted at our camp, Xaluca Luxe Bivouacs Bell Etoile, by dark-skinned Berbers in long white robes and turbans, drumming, singing and playing castanets. Once settled in our individual tents, which were carpeted and complete with shower, sink and toilet, we enjoyed dinner in the dining tent and more music and dancing. I cannot say the tent was warm at night. I guess the outside temperature was at the most 50 degrees and it was the same in the tent, but the heavy comforter on the bed locked in all body heat and it was plenty warm for sleeping.

The sun rose in the desert at 8 in the morning and we were soon off for our camel ride, which was rumored to last for hours. Our guide did us a favor and reduced it to about 45 minutes, which was plenty. The camels came equipped with handlebars and were tethered very close together. They behaved well, each one trying to nuzzle the rider in front of him. We rode the camels to a date farm, where we learned about the challenges of growing things in the salty desert soil and the method for producing dates, as this farm has only one male tree. Due to the decline of bees, the farmer pollinates hundreds of trees manually.

While in the desert we took another four-wheel drive excursion through the sand to visit a Gnaou music cooperative. The musicians are descended from slaves who came from the Ghana Empire. Their instruments, which were referred to in English as “guitars,” are covered with animal skins, have long necks and a muted sound compared to an American guitar. The songs played for us in their language have been passed down for generations and express pain and sadness. After the music, we met a nomadic family at their encampment and were invited for tea inside their low tent.

For many reasons, including the closed border with Algeria, which we were close to, the nomadic way of life is declining. We met a grandfather, his daughter-in-law and two grandchildren. Their father was off somewhere with the family’s remaining four camels. They have had to sell off their animals to feed the family. The nomadic way does not allow for traditional education and all of the family members are illiterate.

After leaving the desert, we learned about how water is delivered underground from a far-off well to create a green oasis in the desert. We visited a couple of ksars, which are multi-story ancient adobe villages with winding pathways surrounded by a protective wall. On our drive to Marrakech, we passed sites where many films have been shot, including Babbel, Game of Thrones, Gladiator, and Lawrence of Arabia. We also saw evidence of alternative power production — windmills and solar installations.

Our tour closed with three nights in a beautiful hotel in Marrakech. We visited another palace, the medina with snake charmers and all sorts of goods for sale, as well as the Berber Museum and Jardin Majorelle, noted for its vibrant blue paint, fountains and tall cactus plants.

Most of the meals on this trip were tagines, meat and vegetables cooked over coals in a ceramic pot with a conical lid. Nowhere were we asked to sit on the floor, and all of the restaurants gave us eating utensils. In Marrakech, we visited a non-profit cooking school that teaches culinary skills to women who are struggling and helps them find jobs. Divided into teams, we learned how to prepare tagines with vegetables, chicken, lamb, beef and fish. That was the most delicious meal of the trip!

One of the best parts of this journey was getting to know our tour guide, Mohamed, a proud Berber, who in addition to Berber speaks Arabic, French and English. He took great effort to answer our questions about Islam and to help us understand the Berber and Islamic cultures of Morocco. We saw women in burqas and hijabs and men in turbans. Everywhere people wear the traditional jellaba, which is like a bathrobe with a hood. Mohamed and many of his peers in the big cities wear modern dress.

At the end of the trip, I dined in a restaurant not on the tour and was thrilled to see belly dancers. In addition to several young women in skimpy outfits undulating their bodies, we also saw dancers whose bodies were covered in lovely long dresses. These dancers had stacked candles on little platforms balanced on their heads. Now that’s a Moroccan belly dance!

Trips and Tours has another outing to Morocco on the schedule for October. For details, contact Jenny Sercu at jsercu@napavalley.edu.

Communing with nature-- month in Montana

There are plenty of places to visit in the Big Sky state: Billings, Butte, Helena, Missoula, and Glacier Park. This story, however, is about a…

Thank heaven for playwrights. In the most depressing of times, the theater continues to provide characters and stories that offer hope, progre…

Where can Americans travel right now?

Where can Americans travel right now?

Demand for real Christmas trees up during pandemic

Demand for real Christmas trees up during pandemic

With no federal guidelines, universities set their own Covid-19 protocols

With no federal guidelines, universities set their own Covid-19 protocols

We traveled by camel through the Moroccan desert.

The Hanns II Mosque in Casablanca.

This is the Palais Shererazade in Fes.

A nomadic family in Morocco.

These are the Atlas Mountains.

Lamps for sale at the medina, the old part of Casablanca.