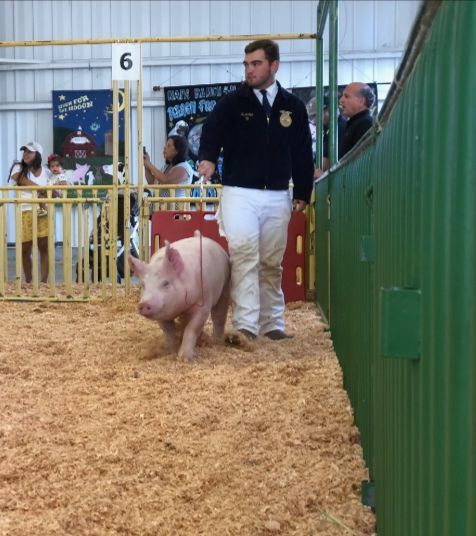 Jesse Cole and the pig he raised as part of Future Farmers of America. 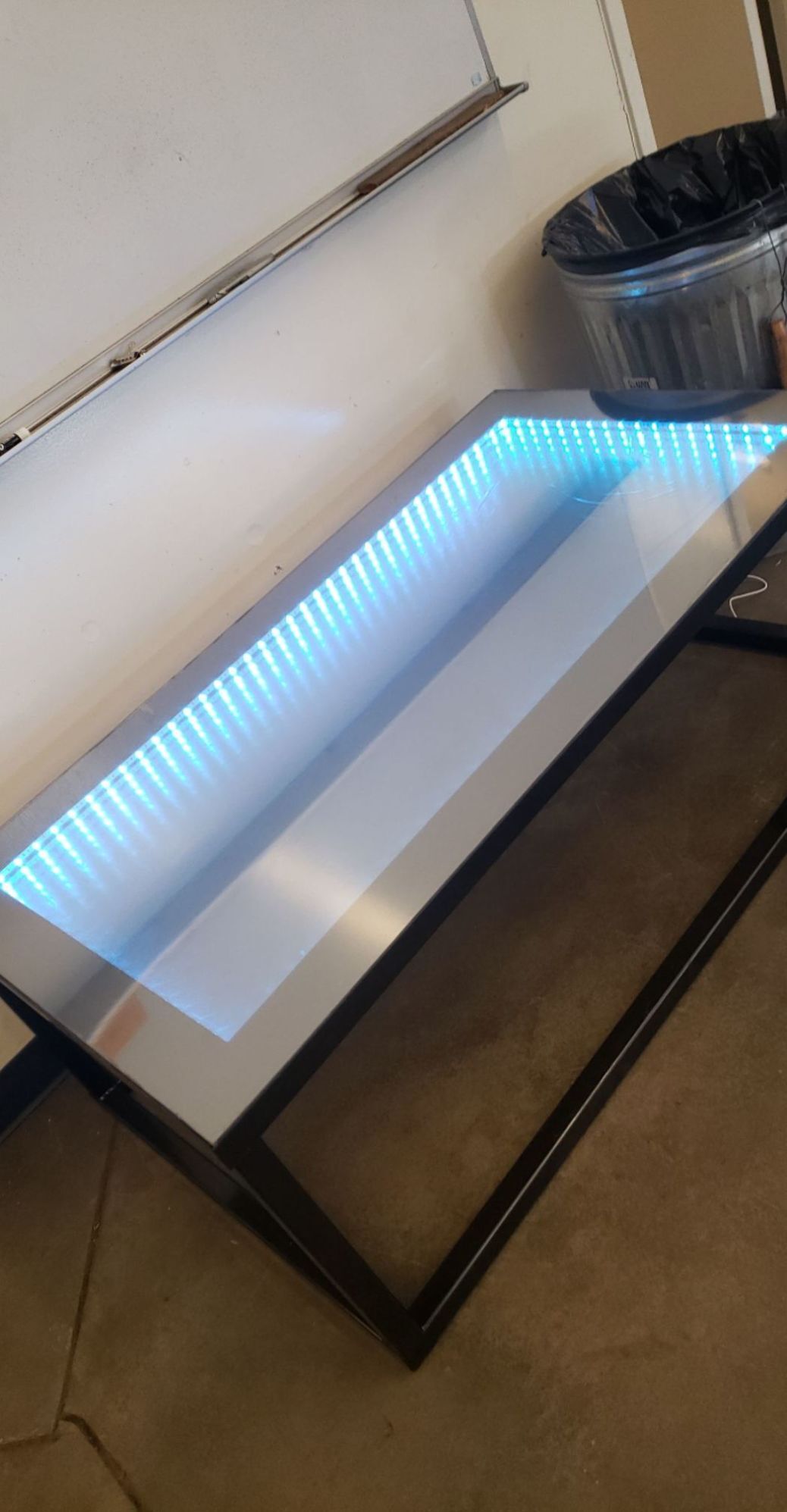 During his senior year, Jesse Cole designed and built this Infinity Table, which uses LED lights and mirrors to give the illusion that one is looking into space. 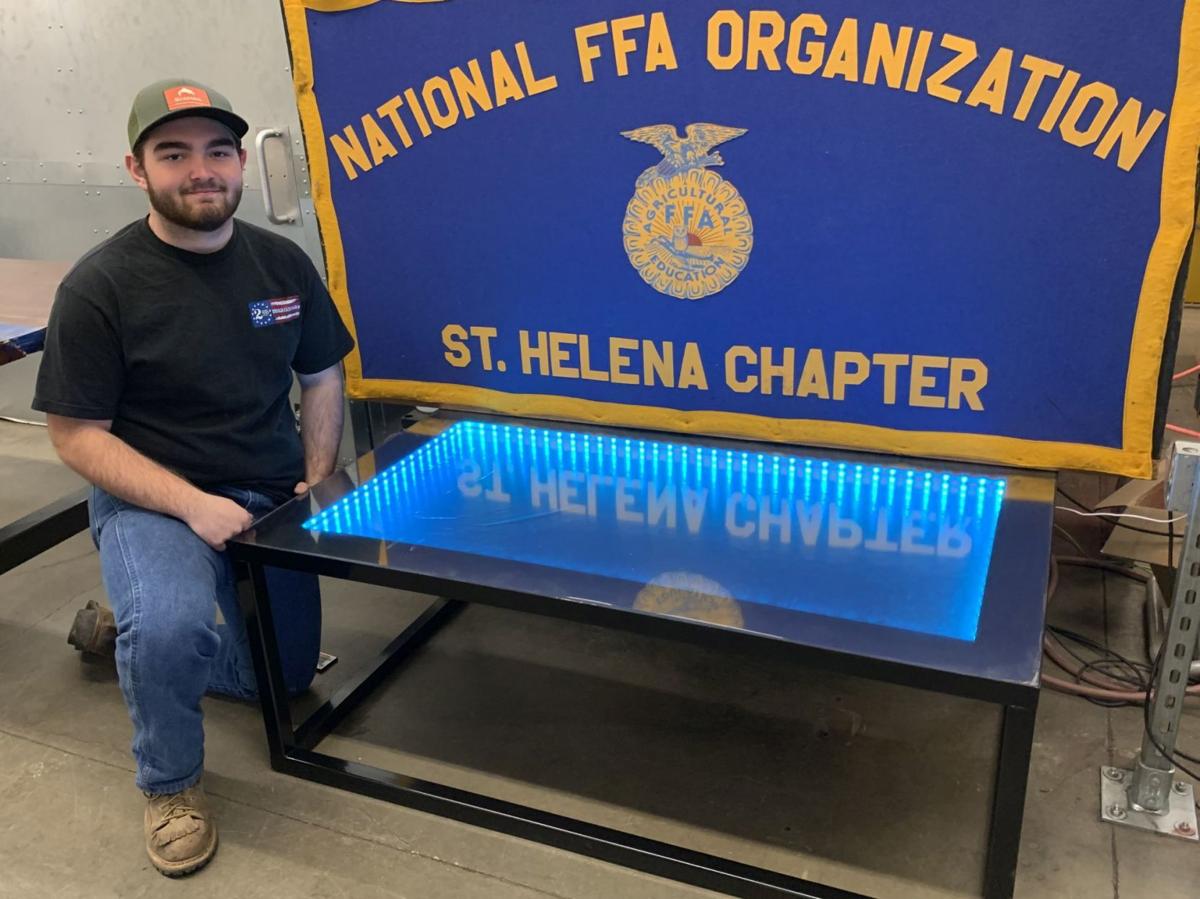 Jesse Cole poses next to the LED Lighted Coffee Table that he made as part of the Advanced Ag Mechanics class at St. Helena High School.

Senior Quote: “If you are going to do something stupid, be smart about it.“

When Jesse Cole was in 8th grade, he wanted to do something “hands-on.” He was exploring classes he could take at St. Helena High School and came across agriculture mechanics class. He decided that was the class for him. He has since elevated his skill at welding into an art form.

Learning to weld in “Ag” mechanics during his freshman year led to an Autocad class his sophomore year, which taught him how to design what he wanted to build before he started welding.

Also in his sophomore year, he joined the St. Helena’s Future Farmers of America (FFA) Welding Team, where he would travel to competitions around California. The competitions consisted of a job application, a written test and a practical where his ability read blueprints and weld what was on them would be judged.

The experience culminated in a career portfolio, a ready made resume that he has used twice in high school in applying to real jobs.

“It’s applicable to real life—it really helps,” he said. He ended up getting a job at Brown’s Auto. He works in the machine shop making hydraulic lines, turning brake rotors, pressing bearings, resurfacing flywheels and much more.

He likes the hands-on aspect of his job — being able to build, fix and machine certain parts.

“Each day is different and new projects come in which keeps it interesting but also makes it challenging sometimes,” he said.

Back in high school, his advanced agriculture mechanics class consisted of a major project. His junior year, he built a fire pit. Then, in his senior year he built an “infinity” table that uses mirrors and LED lights to give the illusion that one is looking into an unlimited space.

Cole did raise two hogs his junior year and learned about showmanship, but decided to skip that activity his senior year. He was glad he did, given this year’s turmoil.

Cole plans to go to Santa Rosa Junior College and get his general education requirements out of the way. He is thinking about majoring in business or possibly agriculture business but hasn’t made a decision yet. Though it was most likely that he would get an associate’s degree in welding technology and start his own mobile welding business, he said.

In addition to the hands-on education he got from his mechanics class, he was also in Agriculture Leadership, the class that cultivates and improves the agriculture department and FFA chapter at the high school. That class involves coming up with activities for the chapter to participate in, planning how the activities would work, and implementing what they had planned.

Cole was struck by how much independence he and his classmates were given, which taught him about the importance of communication and cooperation.

“We had to figure out a lot of things on our own, and we had to work together,” he said. “If we weren’t working together it wouldn’t work. It’s helped with public speaking and becoming your own person — becoming a leader and developing into an adult. It honestly feels like a family.”

Outside of FFA, Cole’s favorite subject was U.S. history. He said he thinks that history may be one of the most important things for people to know because, “it’s very important to know where we came from as a people and what happened in the past, and how we got here today. Like they say, if you don’t know history, you’re bound to repeat it.”

His favorite book in high school was a memoir by Siegfried Knappe titled “Soldat: Reflections of a German Soldier, 1936-1949” about Knappe’s time in the German army during World War II. The book wasn’t assigned in high school. He found it in a bookstore, started reading it and was hooked. He liked it because “it was an insight into Germany’s side, which is interesting because you always only hear America’s side. It was pretty terrible, but it was something to learn from. It gave you another view on it. It really kind’ve opened your eyes to how horrendous it was back then.”

Cole said that the quarantine from COVID-19 has made people a little too concerned with what other people are doing. He said that people need to worry more about themselves and take care of their own and, “know what’s right in your heart and follow that. If you see something going on, don’t be afraid to speak up. But also, don’t make a big deal out of nothing.”

“Things don’t always work out as you planned but you just keep your head up, don’t give up and figure out a solution.”

You can email Cole at jessejcole72@gmail.com to congratulate him on his accomplishments.

John Henry Martin continues his profiles of graduating seniors who excelled in the arts with two Vintage High grads.

Looking ahead to local theater: Lucky Penny has a plan for the future

Lucky Penny's co-founders Barry Martin and Taylor Bartolucci’ map out their plan for the future.

John Henry Martin continues his profiles of students from the class of 2020 in Napa County with two members of the Napa High School Marching Band.

A global cast for 'A Tempest for our Time'

Napa Valley College's Jennifer King has helped produce a collaborative version of Shakespeare's "The Tempest." "A Tempest for Our Time," will be live-streamed on July 11.

Jesse Cole and the pig he raised as part of Future Farmers of America.

During his senior year, Jesse Cole designed and built this Infinity Table, which uses LED lights and mirrors to give the illusion that one is looking into space.

Jesse Cole poses next to the LED Lighted Coffee Table that he made as part of the Advanced Ag Mechanics class at St. Helena High School.