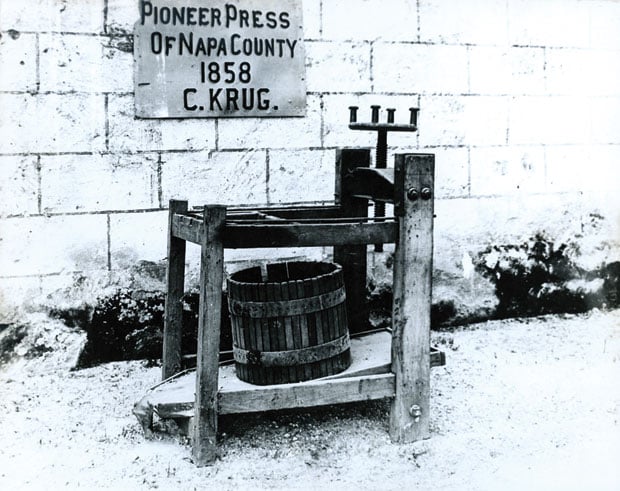 When we stop at the grave of John Patchett on the tours at Tulocay Cemetery, I call him the Rodney Dangerfield of early Napa Valley winemakers.  “He don’t get no respect.”

One reason for his lack of fame is that Patchett died in 1876. Because of ill health, stopped making wine about 1865 before the first Napa Valley wine boom began attracting much attention.  But from recent research, it can be said that Patchett planted the first vineyard in the Napa Valley to make  wine to sell.  Not just in Napa but in the whole valley. George Yount may have planted vines earlier, but his wine was used for personal consumption.

It is also believed that Patchett built the first wine cellar in the Napa Valley. This is described in Menefee’s “Historical and Descriptive Sketchbook of Napa, Sonoma, Lake and Mendocino,” published in 1873. It says, “In 1859 having become convinced that the business of raising grapes and making wine could be remunerative, he (Patchett) erected a stone wine cellar 33x50 feet. He had made about 600 gallons of wine the year previous, selling it at $2 per gallon. The stone for his cellar was quarried out of the hills back of the residence of Cayetano Juarez.”

Charles Krug’s wine cellar, built in 1861. is often listed as the first.

The stone Patchett wine cellar has vanished, which contributes to the mystery surrounding his story.

Patchett was born in Lincolnshire, England in 1797.  When he was 20 years old, he immigrated to Pennsylvania, and there he trained to be a brewmaster.  He married his first wife, Esther Passmore, in 1820.  While they lived in Pennsylvania, they had eight children:  Thomas Passmore, Esther, Elizabeth, Emma J., Margaret Melvina, Mary Ann, George and John Armstrong Patchett.

By 1835, Patchett had taken up farming and the family began to move west, stopping in Ohio, Illinois and Iowa. But in 1850, the lure of the Gold Rush caught his imagination.  Patchett and his wife and some of their children set out across the country to Placerville, then the rowdy “Hangtown” of El Dorado County.  Accounts of the trip point out that this was a difficult five-month overland journey. Patchett began mining in the fall of 1850, but his first wife also died there in November, at age 50.

We don’t know much about his life in the Gold Country, but Patchett, who by then was an “old man” of 53 must have decided to return to farming, because after visiting the Napa Valley in 1852, he began to purchase land here.  These complex transactions, described by Napa historian Floyd Stone in a 1993 monograph, ended with his owning vast acreage. Stone describes one of his first acquisitions, including an abandoned vineyard of Mission grapes, this way, “This old vineyard, near the creek [Napa Creek] had probably been planted by Nicholas Higuera sometime before 1847.” Patchett also purchased land had a newly-built frame house on it and this became the family home.

Another Patchett expert, John Prittie, now lives on Oak Street on what was Patchett land in the house believed to have been built about 1910, by Patchett’s stepson, Benjamin Bradshaw.  In Prittie’s monograph “Patchett’s Grove Winery” he describes the boundaries of Patchett’s land as “… within the area bounded by Laurel Street to the South, Napa Creek to the North, Jefferson Street to the East and California Street to the West.”

Patchett’s relation to Charles Krug is complex. I was told that in 1858, Patchett hired Charles Krug, a Prussian immigrant, who was working in Sonoma, to make wine for him using a cider press. This wine was supposedly the first made in the Napa Valley by other than the Spanish method, where the grapes were crushed by stomping on them in a wooden trough.  The grapes were then enclosed in a cowhide hung from trees while they fermented.  When this was finished, a hole was cut in the skin and the wine drawn off and put into casks.

Krug was born in Prussia in 1825. He came to California in 1852, and from June of that year until 1854 Krug was the editor of the Staats Zeitung, the first German language paper ever published on the Pacific Coast.  While in the Bay Area, he got to know winemaker Agostin Harasthy and eventually purchased some Sonoma land from him, where he planted a vineyard.  There, he met John Patchett, and decided to come to the Napa Valley with his cider press.

This began Krug’s wine career in the Napa Valley. In 1861, he married Caroline Bale the daughter of Napa pioneers Dr. Edward Bale and his wife  Maria Soberanes Bale, herself the niece of General Mariano Vallejo and his brother Salvador.  Krug planted grapes on the portion of Bale’s original land grant which was Caroline’s dowry. Krug was certainly a more important figure in the history of Napa Valley Wine and as the years went by he seems to have forgotten about the wine he made with Patchett in 1858.

Sometime during his early years in Napa, Patchett married his second wife, Susannah Quant.  She died in 1862.  In 1865, he married his third wife, Martha Bradshaw, a widow who was also from England and who had one son, Benjamin.

Patchett’s health began to fail and he started to sell off his land and close his winery business.  In 1876 some of the land, called Patchett’s Addition, became part of the city of Napa.

John Patchett died at the family home on Second Street on August 13, 1876 at age 79.  His obituary in the Napa County Reporter of August 19, describes his illness this way, “Although long afflicted with a painful and incurable disease he bore his sufferings with patience and fortitude and was ready to go when called.”

His estate was valued at $23,000, a substantial sum in those days.  Martha Patchett was named the executrix but provision was also made for some of Patchett’s children and grandchildren.  It is not clear if any of them were in California.

Patchett was buried in the family plot at Tulocay Cemetery.  His tall marker is also inscribed on three sides with the information about his wives.  His stepson, Benjamin Bradshaw, is buried nearby.

Napans were stunned in May of 2003 when a commandeered bulldozer ran amuck at night at Tulocay Cemetery, and ended its rampage at the Patchett marker, knocking a part of the tapered obelisk over.  The damage was quickly repaired, but it wasn’t the first time that vandals had troubled Patchett’s grave. An article that ran in the column right next to his 1876 obituary in the Napa County Reporter tells of “vandals and sneak thieves” who stole the floral tributes left on his grave by his relatives.  He just don’t get no respect!

Historians have tried to pin down the site of the missing wine cellar. John Prittie says he knows the location.  However, when the building was struck by lightning in 1878, two years after Patchett died, the roof caved in and the walls cracked.  Over the years loose stones could have been removed and used in other ways.  Fragments of the Napa Valley’s first commercial wine cellar may be scattered over what once was Patchett’s land.

Even if the winery building is lost, Prittie has discovered what might be the original Patchett home, purchased in 1853. The house would have been in the middle of the present street, when Third Street was extended to the west in 1907. The story was always that the house was either razed or moved.  Studying a series of maps, he has found a house now located on Third which has the exact “footprint” of the Patchett home.

Wouldn’t it be nice if somewhere in town there were a monument or plaque to Patchett, the Napa Valley’s First Commercial Wine Maker.  Let’s get him some respect.

Thanks to George Boyet, who lent me his folders of Patchett information, including Floyd Stone’s monograph, and to John Prittie, for an interview and many pages of Patchett material and maps.

Cemeteries have been called “history carved in stone.” This article continues a series about pioneers whose last resting place is in the Napa Valley. They include saints and sinners, the famous and the forgotten.

Napa Journal: Jogging in the dark with a stranger

Night joggers see and hear things that are unknown to day people. They rule the darkness.

Kevin Courtney: You hear stories. Now I was going to find out for myself.

Chancellor Hartson,  one of Napa’s most distinguished pioneers, citizens and statesman, arrived in Napa in 1850.

A nondescript tree had leapt out of the creek and was attacking our redwood. What's a person to do?

Napa Valley historian Rebecca Yerger delves into the history of the Carneros region of Napa County.

This second-hand cider press, revolutionized wine making in Napa County and California when Charles Krug pressed 1,2000 gallons of "wine juice" in 1858 for John Patchett. Photo circa 1888, courtesy of the California Pioneer Society, Turrell-Miller Collection
© Copyright 2021 Napa Valley Publishing, 1615 Soscol Ave. Napa, CA | Terms of Use | Privacy Policy | Do Not Sell My Info
Powered by BLOX Content Management System from TownNews.com.
You don't have any notifications.