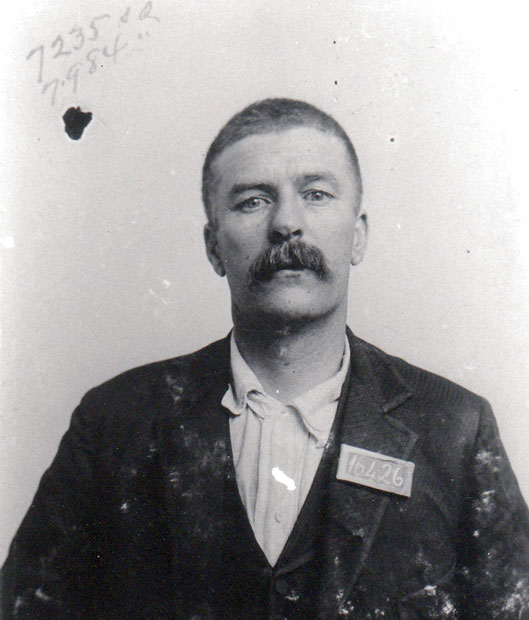 Lawrence B. “Buck” English, Napa County’s most notorious stagecoach robber and bandit, seemed destined to a life of crime by the twisted family feuding that blighted his childhood.

His father, Benjamin F. English, and mother, Pauline, relocated from Missouri to Oregon with their children  in 1846. They carved out a farm on 640 acres north of Corvallis but the brutal winter of 1861 bankrupted the family. This financial downturn apparently led Buck’s older brother, David, to begin a brief criminal career as a highwayman. This decision caught up with him in 1862 when he was lynched in Lewiston, Idaho.

The loss of their son may have spurred the family’s move in 1863 to California’s Green Valley, now in Solano County.

Members of Pauline’s family, the Durbins, traveled in their wagon train with Benjamin’s relatives. One day, a quarrel over property escalated into a violent confrontation when Pauline’s Kentucky-bred brother, Perry Durbin, rejoiced over President Lincoln’s assassination. Ben became enraged and when Perry appeared to be reaching for a weapon, drew his gun and began firing.

Grady was charged with murder but escaped the authorities. Ben lost an eye and Charley was partially crippled in one arm. Ben made his 13-year-old son, Buck, promise to kill his uncle to avenge the murder of Perry.

Further adding to the disorderly family environment was Buck’s older brothers’ favorite form of recreation: After enjoying the services of prostitutes in one of the brothels in Napa’s Spanishtown, Dan and Charley would brandish their guns, threaten the Mexican proprietor and simply walk out without paying. Since the authorities considered the area “a nuisance to respectable people,” the brothers English continued their intimidating ways without worrying about repercussions.

One night, the brothers marched into Spanishtown for another evening of free entertainment, but things didn’t go as planned. A racially motivated dispute led to a violent confrontation.

As the Napa Register reported: “Upon the floor in the center of the room lay the body of Daniel English in a pool of blood ... To add to the awful tableau, his brother Charley lay within a foot of him, groaning, and weltering in his own blood, which was flowing from a ghastly wound in the right breast.”

Dan English was killed in the fight. Charley was thought to be mortally wounded, but was saved by an operation. However, his face was scarred and his other arm was crippled.

The move to Middletown

In 1872, the English family relocated to southern Lake County and bought a farm near Middletown. Buck, Charley and Eugene assisted their father with the farm chores, but they always seemed to be getting in trouble with the law because of their association with ex-convicts, loafers and robbers like Bulger Raines and John “Blackjack” Bowen.

In 1875, the brothers stepped up from petty crime when they robbed several Chinese miners and then held up the Calistoga-Lakeport stage. When he found that the express box held only two brass castings, an enraged Buck vowed to “make Wells Fargo weep.”

Next, the English boys decided to try rustling cattle and hogs. One cattle owner Buck should never have crossed, however, was Andrew Rocca, superintendent of the Great Western Mining Company.  Infuriated when Buck scared a passerby by shooting a handkerchief out of a man’s hand to show off his markmanship, Rocca confronted him with a verbal tongue-lashing. Buck and his brothers retreated, but Buck sent Rocca a message through an intermediary stating that he would tan Rocca’s hide “and make shoestrings out of it!”

Soon after this confrontation, cattle started disappearing from the Great Western property. Rocca began to build his case against Buck, who was arrested on rustling charges. On Oct. 25, 1876, he was sentenced to San Quentin for seven years as Prisoner #7235. Thanks to his connections and a good lawyer, he served less than a year.

Buck next expanded his criminal activities to include horse thievery. Whenever he fancied a horse, he would intimidate its owner into handing it over, saying curtly, “That’s my horse.” He would then ride off on his new mount.

When his gang began holding up travelers on backcountry roads, Buck was tracked down and arrested, convicted and sent to San Quentin a second time. On Jan. 20, 1878, he entered the prison, this time as Prisoner #7984, and began serving a second seven-year term.

A sort of honest living

After an early release in late October 1882, Buck tried making an honest living by driving a stagecoach in Lake County for two years. When he was suspected of robbing a stagecoach in 1883, however, he left for his brother Ben, Jr.’s ranch in Ashcroft, B. C.  He herded cattle, broke horses and was badly wounded while scouting for the Canadian army. Unable to resist the lure of quick cash, he became involved in smuggling whiskey over the border near Fort Macleod, Alberta.

In 1892, Buck was arrested for robbing Chinese miners near Baker, Ore. Convicted and sentenced to five years in prison, he persuaded the governor that he was wrongfully accused. He was pardoned after serving two years and moved to Portland. While bartending in 1895, he became reacquainted with R.N. Breckenridge, an ex-convict he had known in prison.

Gambling losses had left Buck bankrupt and bitter. Certain that Buck’s knowledge of the stage routes in Napa and Lake counties would be an asset in their future criminal endeavors,  Breckenridge joined forces with him.

On May 7, 1895, Buck and Breckenridge stopped a stage traveling between Troutdale Creek and Rattlesnake Spring in Napa County near Mt. Saint Helena. The six passengers, four San Francisco businessmen, a Chinese man, and a young boy, were robbed of $1,000. Buck’s initial command to the driver was “Throw up your hands!” said passenger H. R. Goss. “One of the robbers jumped to the horses’ heads, and both leveled their guns. The weapons and the profanity, which accompanied a threat to blow the driver off the box took all the humor out of the situation and the driver and passengers awaited the will of the highwaymen.

“The particularly cool robber is about five feet eleven in height, the other and shorter is about five feet eight inches. They both wore masks, and each was nearly covered with a dark gray duster, beneath which showed overalls and old shoes. They both wore black slouch hats ... The taller man did all the talking as well as all the searching ... They were both armed with old-style Colt’s revolvers, and swore at everyone, especially the Chinese man, who was beaten and robbed of his papers.”

The driver, Allen Palmer, was told to throw down the strongbox, which was broken open with a hatchet. The box yielded only worthless packages. Furious, the two masked men walked off in the direction of Oat Hill.

When news of the robbery reached the authorities, Napa and Lake County sheriffs couldn’t decide who had jurisdiction, giving English and Breckenridge a 16-hour head start on their escape.

The morning after the hold-up, the two robbers had breakfast at Charles Moore’s ranch, near Monticello. A farmer, who had known English in the past, tipped off stage driver, Johnnie Gardiner, about the two strangers who would be boarding his stage. Gardiner managed to send word by way of some schoolchildren to Constable Phelan, who telephoned the information to the Napa County Sheriff’s Office.

The two robbers each paid the $1.50 fare to Napa at Windy Flat, where they had a beer, as did the driver. Since the authorities in Napa had been notified, Gardiner thought it safer not to try to alert anyone at the Flat.

Napa County Undersheriff R.A. Brownlee organized a posse made up of himself, District Attorney Theodore Bell (who had just wandered into the office and was deputized on the spot), John Williams and John True.

They all carried shotguns as they left in a two-seat surrey to meet the Napa-bound stagecoach. Hoping to set up an ambush on the north side of Mt. George, they realized it was too late as the stage came around a bend in the road.

Buck English sat beside driver Gardiner with a shotgun across his knees. Breckenridge sat on a seat behind Buck. As the two vehicles were about to meet, Undersheriff Brownlee aimed his shotgun at Buck, saying, “There’s the fellow!  Stand them up!”

The outlaw, a crack shot, recognized Brownlee and fired a shotgun blast that blew away the undersheriff’s shotgun stock and peppered his face with small-diameter birdshot pellets.

John Williams fired his shotgun. Buck lurched forward in his seat, as did the driver, both wounded by the larger buckshot pellets. Still, Buck drew his Colt .45 revolver and thrust it in Gardiner’s face, yelling, “Drive fast, you s** of a b****, or I’ll blow your head off!”

With Gardiner whipping the horses, now only 15 yards away, Bell fired a hurried shot. Buck slumped against the driver as the stage picked up speed on the down slope of the hill.

Bell chased the stage on foot for 500 yards until the wounded Gardiner could bring the vehicle to a stop. Buck had passed out from pain, blood loss and shock. The driver had a painful, but not dangerous, wound in one thigh. Breckenridge jumped from the stage and ran into the brush, but quickly surrendered after a warning shot from John True.

The stage carried the wounded Buck and Gardiner back to Napa. Buck, with 52 buckshot pellets in his body, was not expected to live. The doctors removed the buckshot, as well as three rifle bullets lodged near his spine from a previous gunfight.

To everyone’s surprise, the outlaw managed to survive his wounds and was put on trial as soon as he was well enough to stand. After an unsuccessful escape attempt, Buck English was convicted and, due to his past record, given a life sentence. He entered San Quentin on July 9, 1895, as Prisoner #16426. His accomplice, R.N. Breckenridge, received a 25-year sentence.

Surprisingly, Buck became a model prisoner and urged the younger convicts to turn away from crime. He told them, “Twenty-five years ago, I was a farmer’s son from Lake County.  Now I am a convict, sentenced to spend the rest of my life within these walls.”

Buck English was paroled in 1912, a changed man. He died three years later in Colma just before his 60th birthday.

The author, the late Doug Hattala, passed away not long after researching and writing the story of Buck English at the Napa Country Historical Society in Napa’s Goodman Library. Hattala, had a passion for films and screenwriting, and loved history. He was a valuable asset to the society and was appreciated by the staff and the volunteers.

For more information or to become a member of the Napa County Historical Society, visit napahistory.org or call 224-1739.

Helpful self defense skills you should know

Oklahoma school cheers for cafeteria manager as she passes her U.S. citizenship test

Oklahoma school cheers for cafeteria manager as she passes her U.S. citizenship test

I want to live lean and green. It doesn't always work out that way.

Napa Journal: Jogging in the dark with a stranger

Night joggers see and hear things that are unknown to day people. They rule the darkness.

A nondescript tree had leapt out of the creek and was attacking our redwood. What's a person to do?

Napa Journal: Can you have a fairy-tale wine country wedding on Zoom?

If you marry on Zoom, every guest has the best seat in the house.