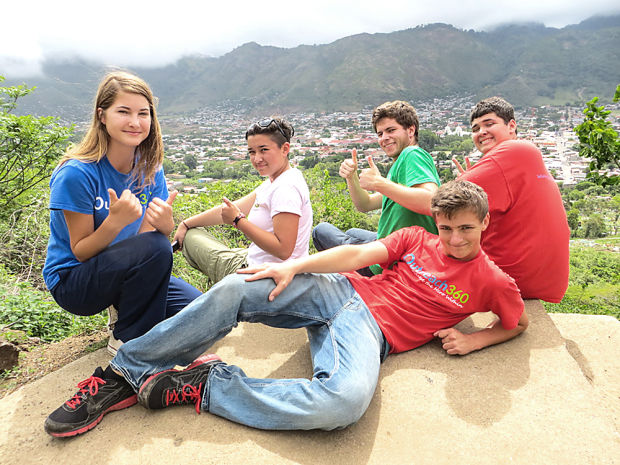 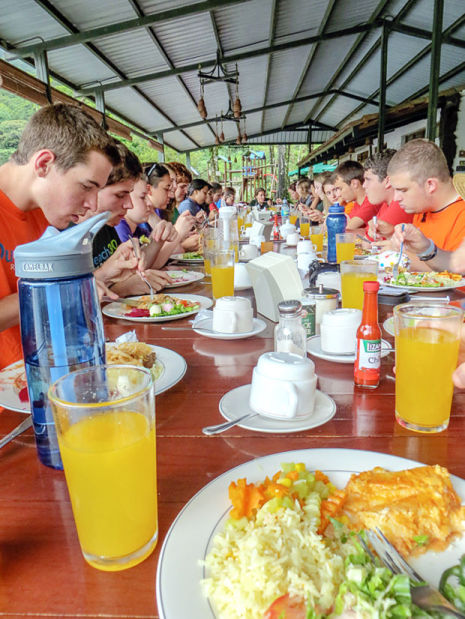 Napa teens share a meal during their volunteer time in Nicaragua. 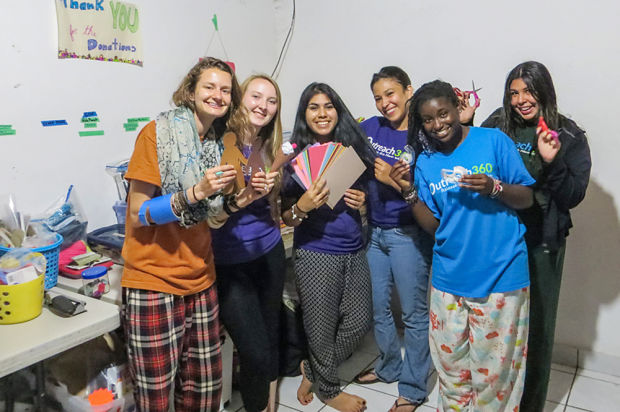 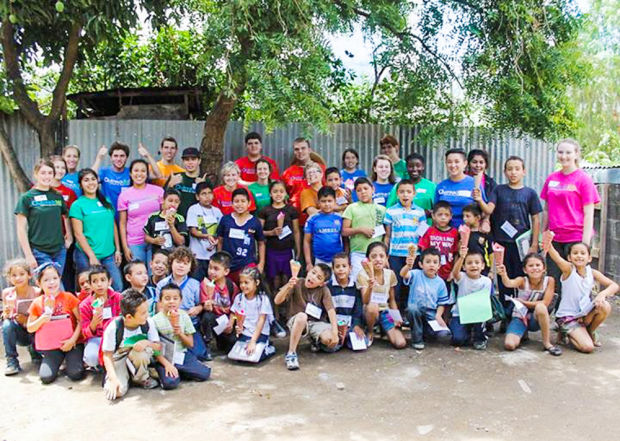 New Tech students pose with their students in Nicaragua.

Nancy Hale and Anne Vallerga, teachers at New Technology High School in Napa, wanted to give their students a summer experience that would expand their horizons. With student input, they decided on a service project with Outreach360 in Jinotega, Nicaragua. The goal of the organization is to transform the world into a place where all children have opportunities for an education, so that they may make choices about their future lives.

Hale liked the idea of taking students to a Spanish-speaking country to show them the value of continuing their foreign language studies. Participants were required to have completed two years of Spanish; those with the most Spanish skills easily took on leadership roles once they were in Nicaragua.

Students were excited about being volunteers rather than just tourists, and spent nine months planning and fundraising. Outreach360 pays for its English language schools for poor children in part by charging volunteers a fee for housing, meals, and local transportation. The New Tech students received donations from the three Napa Rotary clubs and Napa Valley Bike Tours.

Jinotega is located about 100 miles from Managua, in north central Nicaragua. Its elevation of 3,400 feet gives it a cooling breeze, compared to the sweltering tropical lowlands. Eighty per cent of Nicaragua’s coffee is grown here.

As in the rest of the country, most families live on a few dollars a day ( the gross national income per capita in 2010 was $1,110 per year per International Fund for Agricultural Development and other sources, statistics show) and schools run on double sessions.

Hale describes the Nicaraguan students she met as “warm, friendly and enthusiastic. Although they lived in one-room homes that flood during the heavy rains, their families made sure that they were at school every day.”

The 17 New Tech students and their teachers and chaperons worked with orphaned and underprivileged elementary school students in an Outreach360 Learning Center. They taught English to two sessions of forty students, one in the morning and one in the afternoon. This usually involved whole group instruction and then working with the students one-on-one, as well as reading with them from bilingual books.

As teachers, the Napa teens had to review their assigned learning objectives and prepare lesson plans in the evening. Hale and Vallerga appreciated their students’ challenges with the responsibilities of teaching. Vallerga said, “It was incredible to see the bond between the students develop, and how kindness and compassion could be communicated despite language barriers.”

What was the best part of this experience? Recent graduate Maria Silva said, “Being a part of Outreach360 was absolutely a life-changing experience. All of the children that we worked with had amazing personalities and big hearts, the love for learning that they had made me believe that there is great hope for the next generation. A week away and I’ve come home thankful for all of the opportunities that I have been blessed with, by my parents and by our amazing teachers who made this trip possible.”

In Jinotega, the group watched a documentary film that detailed the poverty, teen pregnancy and illiteracy rates in Nicaragua. The teachers noted that the film had an impact; their Napa students didn’t fill their plates quite so high at mealtime. Hale said that the greatest benefit of the trip was “a realization that we need to be grateful for all that we have, and appreciate life itself rather than the material goods that we are made to believe make us happy.”

In addition to daily lesson planning and teaching, the Napa group enjoyed an excursion to a local sustainable coffee farm, Selva Negra, whose estate coffee is sold at Whole Foods. They walked to a coffee laboratory where they learned to evaluate coffee quality by the cupping method, which involves examining coffee in its raw, roasted, ground and brewed states and rating characteristics such as aroma, acidity, and body.

The students also had time for a Latin dance lesson and a visit to a women’s ceramics cooperative where ancient methods are still in use.

Did the teens enjoy sleeping under mosquito nets while listening to the sound of rain on a tin roof and ambient noise from roosters and donkeys?

Student Ethan Schuler says at first it was hard to believe he was in such a different place. After a while, he saw that “everything is more laid back there” and that the people live in the present more than Americans. He was encouraged to see the differences this program is making for the children. He heard elementary students who had visited a university express their wishes for careers they would like to pursue, just the way he and his high school friends are thinking about what is ahead.

Schuler said, “The parents care passionately about the next generation. They want their kids to have opportunities they didn’t have.”

Schuler, who will be a senior next year, has taken on developing and continuing the program for next summer as his senior project. New Tech High may return to Nicaragua or go to the Dominican Republic, where Outreach360 has another program. Ethan hopes that an early effort on fundraising will help his classmates to earn more of the cost of their trip. It appears that New Technology High teachers’ travel program may take on a life of its own as an annual service trip.

Amphibians may be out of sight. but they are a fascinating part of our natural world.

The Climate Connection: Moving away from disposables

Napa Climate NOW! has drafted a proposed mandate for adoption county-wide Reusable Foodware and Waste Reduction Ordinance to transition food establishments and customers from disposable plates, cups, straws, napkins, condiment packages, and so on to reusable and compostable foodware.

Napa Farmers Market: It's the best time of the year for apples

While apples are available year-round in grocery stores, now is the best time to enjoy them: fresh, locally grown, and right off the trees.

The chemical is in food storage containers, shampoo, makeup, perfume and children's toys. Here are tips to reduce your exposure.

The Rome-based design team has just unveiled renderings of a brand new 69-meter yacht design with a "gaping hole" right in the middle.

What is microphobia? Is there really such a thing? Well, yes, sort of. It maybe not be recognized as a mental condition, but it exists.

Sean McCawley, Fit for Life in Napa Valley: Keeping our grip as we age

It’s a hassle to regain the strength of our hands if unmaintained over time. Sean McCawley has suggestions to keep yours strong.

The Intergovernmental Panel on Climate Change (IPCC), which represents the consensus of the world’s leading climate scientists, has graphically called attention to the climate challenge we face. Yvonne Baginski looks at what we can do locally.

Napa teens share a meal during their volunteer time in Nicaragua.

New Tech students pose with their students in Nicaragua.