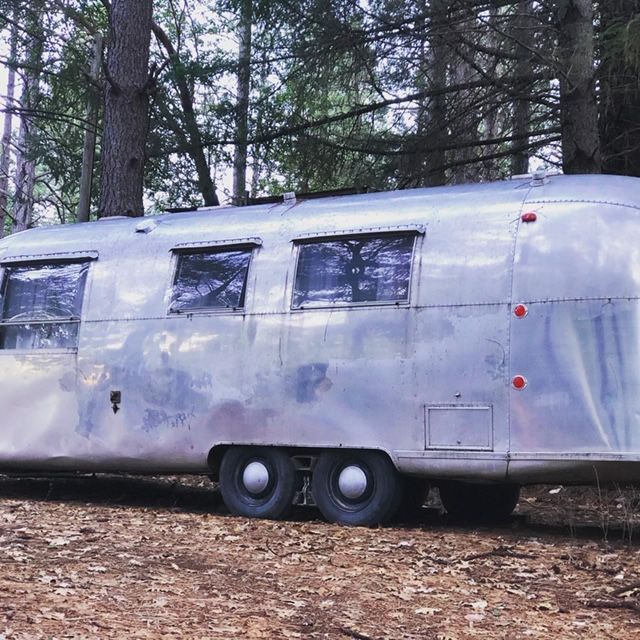 After finding this 1967 Airstream "Land Yacht" for sale, author Barbara Barrielle went to work to get it ready to take to the road. 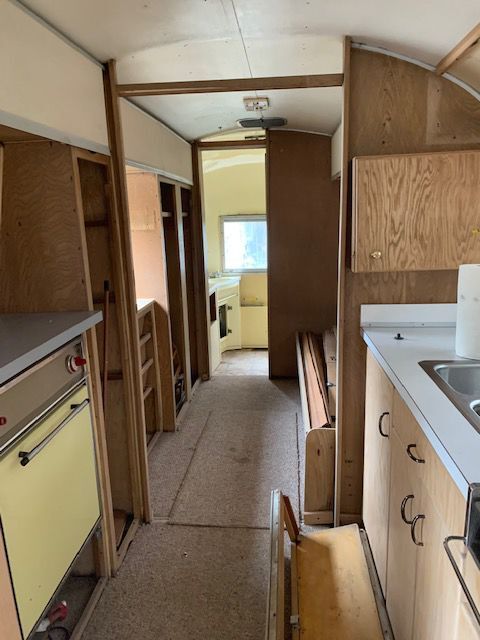 The interior of a trailer about to get a make-over.

I always thought they were cool but never had a desire to own, let alone renovate, an Airstream trailer that is as old as I am. Then one morning, on Facebook, I saw a “marketplace” listing come up for something called a Land Yacht.

The name alone intrigued me after spending so many years in the sailing industry and in public relations for America’s Cup teams. My ex-husband is a professional competitive yachtsman and it was a part of my life for many years.

The asking price on this trailer was $7,500, which I thought was reasonable but really had nothing to compare it to except a Google search that indicated it may be a good bargain.

But the condition of a 1967 Overlander Land Yacht could be anything from driveable but needs work to a complete catastrophe that could take years of work and tens of thousands of dollars.

I made an appointment to see the unit, which was in the next county over and known for pop-up drug labs, so I took a fair share of ribbing for even considering the Airstream.

I took a friend who does maintenance for me so I’d have a voice of reason but that went only so far when we opened the door and climbed up the two stairs only to have him mouth to me “you’ve got to buy this.”

The trailer, although tucked away in a corner of the overgrown property, looked pretty darn good. There was a dent on the outside and a missing door to the refrigerator ventilation, but we thought it looked clean and relatively easy to update.

What got me when looking through the unit was a big book of Montana maps on the desk. I have an affinity for that majestic state, had my dog named Montana with me and had planned to take a trailer there when shooting a film later in 2020, which became 2021 as our world changed dramatically two days later.

It turned out the original owner, who had died just six months earlier, was from Montana; Big Fork to be exact, a place I adore and had just visited in December. The license plates were registered in Montana and the owner’s daughter, who listed the “land yacht’ also hailed from Big Fork. She was moved to tears when I told her the Airstream would be going back to Montana as a support vehicle for a film shoot.

Monna, the seller, said she felt her Dad had been involved in bringing me to her and we hugged (before COVID-19) and promised to stay in touch. I paid her $6,800 and we all were pleased.

The next day, my maintenance guy, Tony, headed back up to get the trailer and carefully drive it down the winding hills that separate Lake from Napa County and into my driveway where it fit perfectly against a hedge on the side of my oversized driveway pad.

We then pounced on the trailer, oohing and ahhing and making notes of what to keep original (as much as possible), what we could paint, replace, redesign and update. I was two days into being the owner of a 26-foot Overlander Land Yacht.

We pored through the original owner’s manual, Airstream sites online, parts supply outlets and then, Pinterest, the Pearly Gates for the Airstream idealist. Tony was hooked. He needed to force himself to sleep because there was so much good stuff on social media, but I had a budget so my dreams, while cool and retro, were thrifty.

And the next day, pandemic lockdown started in a wave across the United States. Although we were not clear what would happen in the next few months, it was clear to me that I had a project, and this was the perfect time to tackle the renovation of an Airstream born about the same time I was..

Tony and I made the plan and it became clear he’d be doing the heavy destruction/construction work and I was designing, updating and refreshing the unit in the best way to bring this beauty back to its glory days.

Retro all the way while maintaining as much of the original wood and charm as possible. I posted photos on Instagram of the ‘before’ photos and have documented the disassembling, repairs and reconstruction on Instagram quickly learning that owning an Airstream trailer makes one quite “cool.”

Even my 22-year-old daughter had newfound respect and expressed how excited she was to take the Land Yacht on adventures. This may be a time of “over my dead body” and she’d gladly roll right over me with a two-ton trailer.

Airstreams were built to be light and towable by station wagons and Jeeps, and I own a 1997 classic of the latter. So, consideration for materials that remain light meant that we’d try to use the original kitchen appliances and bathroom installs and, while tempted to tile the floor with leftover ceramic, press and stick were more reasonable.

Tony set to work dismantling the interior to make sure the underlying structure was intact, encountering bee’s nests and countless spiders along the way as well as dry rot and hidden “jerry-rigged” fixes that would have to be “re-fixed.”

Meanwhile, I chose the retro Tommy Bahama fabric reminiscent of the banana leaf wallpaper at the Beverly Hills Hotel for the cushion refit. A friend’s sister, normally hard at work making prom dresses during a season that was no more thanks to the coronavirus, now had time to reupholster my cushions at a more than reasonable rate.

I scoured the internet looking for interesting light fixtures, curtain rods, curtain fabrics, faucets and other plumbing needs and was able to order most everything online. Tony spent time in the Ace hardware store sourcing paints that would cover vinyl and other surfaces. We decided to go all gloss white with the original pine cabinetry, the retro green/black/white cushions, black and white peel ‘n’ stick tiles for the entire floor and mid-century style fixtures and true antiques where we could find them.

I was sure that missing exterior refrigeration vent cover was going to be a challenge and it was. There are many Airstream groups and forums that can help answer questions but finding a more than 50-year-old piece of metal with a key seemed impossible, until I found it on eBay after a two-week search.

Excited, I contacted the seller immediately to buy yet she forced me to wait through the auction, never telling me the reserve price. It was a full seven days before I secured that piece of the exterior puzzle. We were so excited, and then Tony found the missing cover, a little beat up, in a drawer. My eBay find was in better shape, so no loss.

Now we are just putting the interior pieces back together and the whole trailer will get a major polish. My renovation budget was $5,000, and it looks like I will come in under that.

Researching Airstream restorations will show that the price tag just to renovate is over $50,000. Looks like I have my perfect tiny home on wheels for less than $15,000 and many good memories of “Tallulah’s” rebirth during a period of nationwide challenges and stress.

Yes, my mother picked that name and I’m going with it!

Watch now: How to take a stress-free road trip with pets

How to Take a Stress-Free Road Trip with Pets

The pandemic pivot for wineries

In times of COVID-19 wineries have had to be creative to figure out how to capture a piece of the booming wine business even if the brand doesn’t have a place on grocery store shelves.

A recipe that shines with sparkling wine

Before the COVID-19 shutdown, a train trip to Oregon yielded a memorable dinner at Noble Rot restaurant in Portland.

Three days (and many cocktails) in Charleston

CHARLESTON, S.C. — Charleston, is undeniably a city of history and elegance. It is evident to the eye upon driving, walking or “horse-carriagi…

The day of Mardi Gras (Fat Tuesday) changes every year but it is the time to celebrate before the traditional time of Lent, 40 days of sacrifi…

California has the well-traveled Highway 101 and Interstate 5 running from north to south, but a less traveled route takes you through the wil…

Cook Islands: an island vacation without the glitz

If your idea of paradise is lounging on a Hawaiian beach under swaying palm trees, eating fresh-caught fish and sipping tropical drinks, but d…

CDC warns new Covid-19 variants could accelerate spread in US

The deadliest jobs in America

The deadliest jobs in America

Watch this rocket launch from the wing of a jumbo jet

Watch this rocket launch from the wing of a jumbo jet

After finding this 1967 Airstream "Land Yacht" for sale, author Barbara Barrielle went to work to get it ready to take to the road.

The interior of a trailer about to get a make-over.