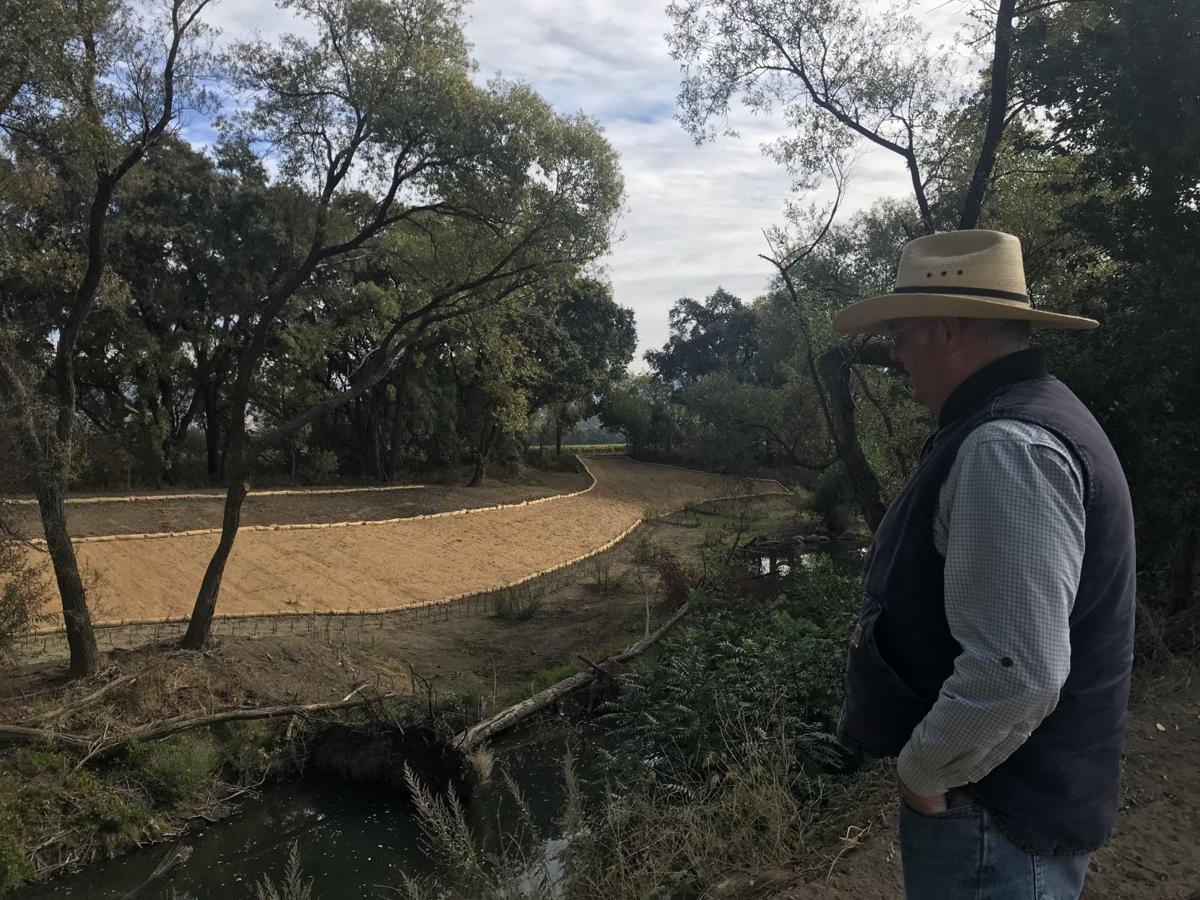 Vintner and farmer Tom Gamble by the Napa River on his Oakville property.

I had a new bottle of Gamble Family Vineyards 2019 Napa Valley Rosé, which seemed like a good choice to open for Earth Day, these 50 years after the movement to save the planet began. It was partly because delicate color of the wine could have come from either a sunrise or a sunset over the mountains.

The description, too, was intriguing: a blend of Oaklaville Cabernet Sauvignon (51%), Cabernet Franc (43%), Petit Verdot (4%) and Merlot (2%). Opened, it was light and fresh, subtly floral, with fruit like the first strawberries of the season or an early white peach, and just a hint of grapefruit. A thoughtful rosé, you might say, with an Old World finesse, from winemaker Jim Close, who began his career in the Languedoc region of southern France and has been at Gamble Family Vineyards since its beginning.

Sipping it, I thought about the first time I visited the Gamble winery in Oakville. I had been invited to join a group of visiting wine writers for dinner at the relatively new Gamble Family Vineyards, which had opened to visitors in 2014.

Mostly from the East Coast, the visitors had gathered at the Gamble farm, dressed for wine writing in sports jackets, and spike heels and cocktail dresses. And Tom Gamble loaded them into the back of a flatbed filled with hay bales and drove everyone around the land in the valley where his family has been farming for a century.

The first stop was at a Sauvignon Blanc vineyard, which, Gamble explained, lies at the geographical heart of the Napa Valley. The writers, clutching their wine glasses as they bounced along the dirt roads, were politely enthusiastic, but I wondered if they realized how truly near the heart of the valley they were.

Tom Gamble’s grandfather Launcelot began cattle ranching and farming in the valley in 1916, and his sons, Launce and George (Tom’s father) continued the tradition. Tom grew up working on the land and he was the Gamble who ventured into the wine industry when he bought his first vineyard in 1981. Today, he owns and farms 175 acres of vineyards in Oakville, Rutherford, Yountville and Mt. Veeder, which produce his Bordeaux variety wines.

It wasn’t just the knowledge of the land that Gamble inherited, but the tradition of stewardship. His mother, Mary Anne, was one of the ardent supporters of the Napa County Agricultural Preserve, adopted in 1968, making little Napa County the first in the nation to protect its land for agriculture.

The foresight of these conservationists who preserved the valley made possible another project, which was the reason for a second visit I made to the Gamble property last October.

This time we walked, out to the banks of the Napa River to view the progress on Napa River Rutherford Reach Restoration Project, which had just received the 2019 Outstanding Environmental Project Award from the Friends of the San Francisco Estuary.

The project, expected to be completed in 2022, is restoring the river, riverbank and habitat along a 9 1/2 mile part of the Napa River. Gamble and his wife, Colette, also a Napa Valley native, are among the landowners taking part in the project. The Zinfandel Road to Oak Knoll part of the project runs through their land in the heart of the valley and the center of the watershed.

The Napa Watersheds web site, describes how “historic changes in land use and management” — the arrival of white settlers — destroyed habitats and reduced the river, in places, into narrow channels, causing flooding and erosion.

The restoration is a collaborative project of Napa County, the Napa County Resource Conservation District, Environmental Science Associates and private landowners. Participation is voluntary to help the river recover from the toll of human use. It means, among other things, pulling out and setting back valuable vineyards close to the riverbanks. In addition to the Gambles, who also removed a house built on the river bank, other landowners joining the effort include Jackson Family Wines, Constellation Brands, Treasury Wine Estates, State Farm Ranch, LLC, and the Missimer and Traina families.

The Gamble property is set far enough back from Highway 29, so that few people driving up and down the valley might be aware of the work taking place on the river. Up close, however, one can see the progress. Riverbanks have been smoothed and invasive non-native plants removed. They are being replanted with native species to create buffers between the vineyards and the river. Other engineering feats cleared out the river and created benches and backwater habitats. When heavy rains come — if they ever do again — the river has a wider, freer space through which to flow.

And nature is taking hold. Gamble said he sees the effects of these changes daily. “The explosion of wildlife is amazing,” he said, noting that his wife recently had counted 67 bird species in the area, including nesting osprey. Gamble himself likes to watch the activities of beavers, industriously carrying on their own restoration projects.

It’s all connected, Gamble reflected. The Ag Preserve allowed the wine industry to prosper; this success makes it possible farmers, like Gamble, to give back. In the case of his family, they have given up some 10 acres along the river. Gamble said he views it as his legacy to help to create — or recreate — a river that is “the most environmentally intact in the Bay Area.” “And it’s good to leave a legacy.”

Amidst all the confusion, loss, and suffering the coronavirus pandemic has caused in these past weeks, the extraordinary good news was how quickly, with humans in retreat, the wilder, natural world began returning: animals venturing out of hiding in Yosemite, the dolphins swimming in the Venice canals, the wild goats taking over a Welsh village, the skies clearing over Los Angeles and New Delhi.

Forces knocked that first, world-wide Earth Day in 1970 off its path, divided people and dissolved resolve, so these 50 years later, we find ourselves — to take a line from Barry McGuire’s 1965 doomsday song — on the eve of destruction. The drumbeat is pounding home that, instead of 50 years, we have only 10 to halt irreversible destruction. The events of these past weeks have shown, however, rather remarkably, that it is possible for humans to change, and thereby effect change.

Part of the power of wine, I think, is its ability to recreate a place in time, whether it’s the landscape where the grapes grew or where you were when you tasted it, who you were with, what you talked about. Sipping the Gamble rosé was like revisiting that quiet place in the heart of the valley, where work is still going on to restore and protect a more natural world. How quickly unified efforts can make it happen; it almost made the color of the wine seem like more of a sunrise than a sunset.

Gamble Family Vineyards and Winery is the creation of Tom and Colette Gamble, and given the couple’s history, it’s no wonder they are making s…

Celebrate with Tedeschi Family Winery June 6, from the comfort and safety of your own car, with live music and handmade pizzas “to-go.”

The World in a Glass: Boisset and the art of blending

When he bought St. Helena's Raymond Vineyards, Jean-Charles Boisset admitted cheerfully, "I had no idea how to make Cabernet Sauvignon."

Vintner and farmer Tom Gamble by the Napa River on his Oakville property.