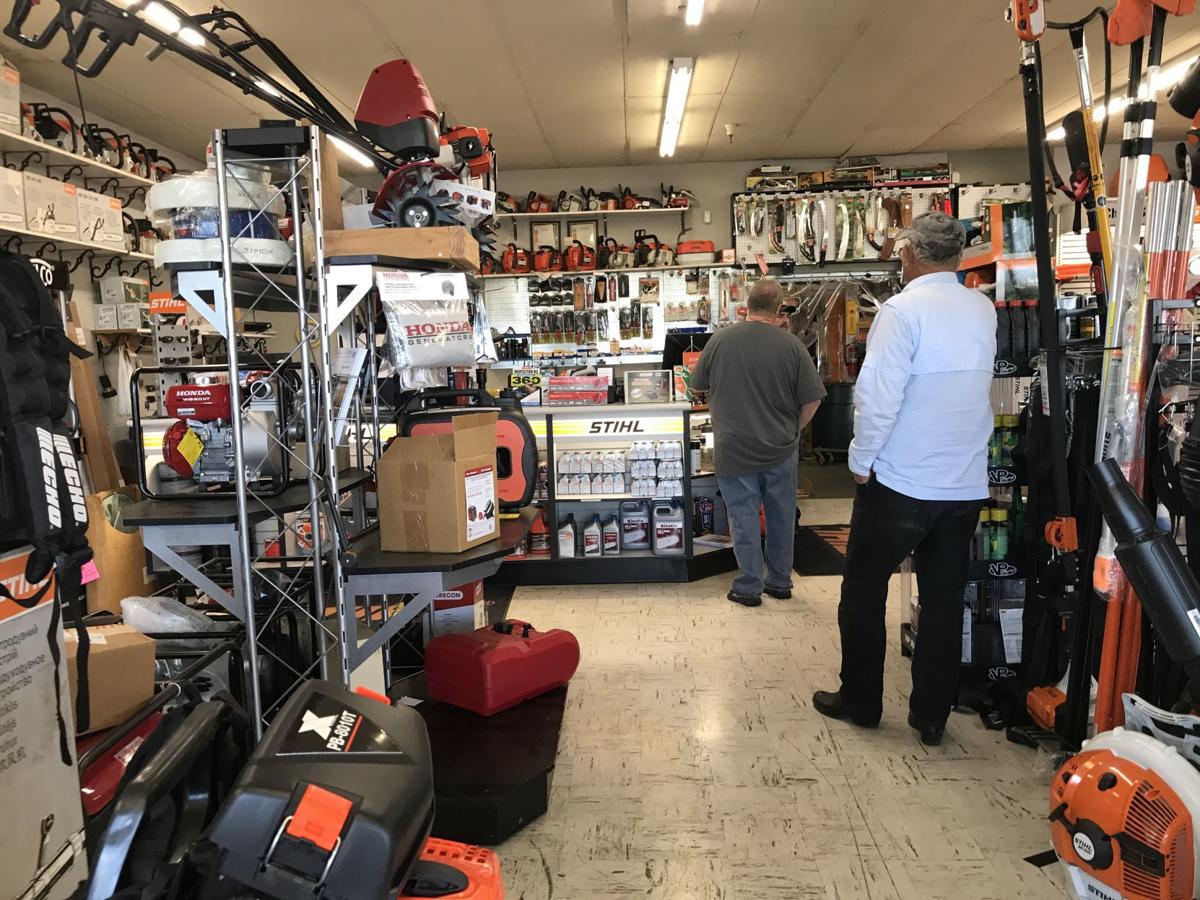 A short line of customers at Napa Power Equipment on Tuesday. The store said it had fielded more that 50 inquiries from individuals considering purchasing a generator. 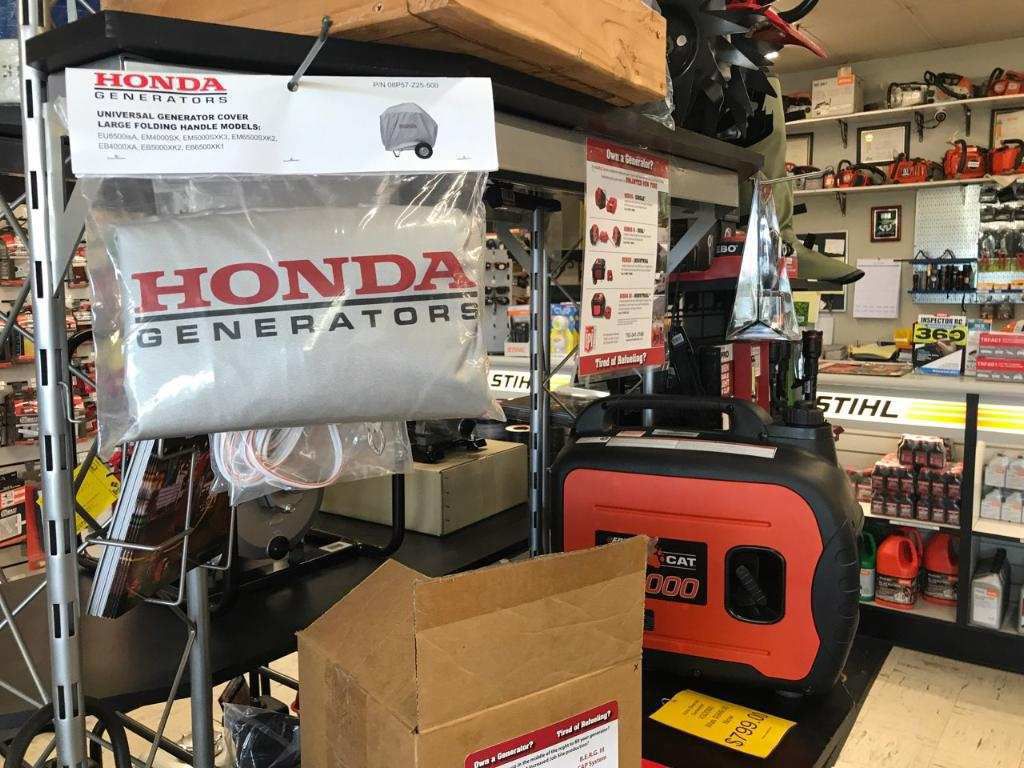 A display at Napa Power Equipment. The store still has generators in stock, according to employees, though it's low on stock of small generators that power things like fridges or lights in homes.

A short line of customers at Napa Power Equipment on Tuesday. The store said it had fielded more that 50 inquiries from individuals considering purchasing a generator.

A display at Napa Power Equipment. The store still has generators in stock, according to employees, though it's low on stock of small generators that power things like fridges or lights in homes.

In the wake of Pacific Gas and Electric’s announcement that 32,000 customers in Napa County could lose power for days, residents rushed to prepare themselves Tuesday.

Bradley Breese, a sales associate and mechanic at Napa Power Equipment on Jefferson Street, estimated the store had received over 50 inquiries regarding generators. At mid-day Tuesday, the store still had generators in stock, but was running low on smaller models – the kind you might use to power your refrigerator or keep a few lights on in your home, Breese said.

A handful of customers lingered in the store, each with questions about generators: one man bought five gallons of fuel for his home generator, while another inquired about what it would take to install a generator to power his entire home.

The scene was similar at Home Depot in south Napa. One man filled a cart with flashlights; others, like Jill Erickson, had come to inquire about purchasing a generator, though by Tuesday afternoon the store was out of stock.

Erickson, who is from Yountville and moved to Browns Valley in June, said she’d lost power after the wildfires in 2017. She’d come home from vacationing at the time, grateful that her house was still standing, and thrown out the contents of her entire fridge and freezer.

Erickson said she was considering going all the way to Santa Rosa to look for a generator, as she’d heard the power shutoffs could last as long as five days.

“It would be worth it for a long duration like that,” she said, of the drive of more than an hour to Santa Rosa.

John Stewart, who has lived in Napa since 2010, purchased a generator with the capacity to power his entire home about a year ago, in reaction to losing power during the fires in 2017. He’d just finished hooking it up to his house about a week ago, he said.

On Tuesday, he was at Home Depot to buy three five-gallon gas containers for the generator.

“Emergency services said 24 hours for sure, and that it could be up to five days,” Stewart said, adding that he couldn’t imagine the shutoff would last that long, but wanted to be prepared regardless. “The generator runs for probably 12 hours on a tank of gas, and there’ll certainly be gas within driving distance.”

Walter Silva was shopping for flashlights and batteries at Home Depot with his 2-year-old son on Tuesday. His family was already more or less prepared for an outage, he said, but he was being careful to stock up on fresh batteries and candles.

“We have coolers – all that stuff,” Silva said, noting that he was concerned about keeping food in the fridge from spoiling. “(PG&E) said that the outage could be five days. If it’s going to be more than that, I would consider getting a generator.”

Silva said he would order the generator online. Preparing for power outages was comparatively simple compared to preparing for an approaching wildfire, he said.

The outage could also extend to Napa’s wineries, which for many is during harvest. Running a winery on generator power can be a complex process. Generators large enough to power entire wineries are often costly and require permits from the county and the state’s air quality management district.

“This is shaping up to be one of our biggest weeks (of harvest),” Judd Finklestein of Judd’s Hill Winery said. “A big percentage of our Cabernet and some other red varietals are at ripeness, and they’re scheduled to come in this week. So to not be able to use our equipment that relies on electoral power – we’re preparing all options.”

As of Tuesday afternoon, he said, the winery had “just fired up” a small generator, which would allow it to operate on a limited basis. The generator, which is not large enough to need a permit, could power a press or the winery’s pumps, according to Finklestein. The winery was in the process of searching for other generators. Judd Hill’s winemaker was talking to some of the winery’s custom wine clients to see if he would be able to borrow an additional power source, Finklestein said.

“Another thing that concerns me beyond production is how we can take care of our guests (during an outage),” he added, listing adequate lighting as a specific concern. He noted the heavy visitation to the valley during harvest time.

Finklestein said that, ultimately, he believed the winery would make it out of the outages unscathed, crediting his team for their ingenuity.

“It just seems to be our biggest week (coinciding) with the impending shutoffs. It’s not the best timing – it just makes a hectic season even more (so),” he said.

“I’ve been in the wine business a long time, and haven’t had to deal with this exact situation, but we’ve overcome challenges before, so we will this time, too.”

Readers Note: The Napa Valley Register is providing free access to this article. Please consider supporting local journalism like this by purc…