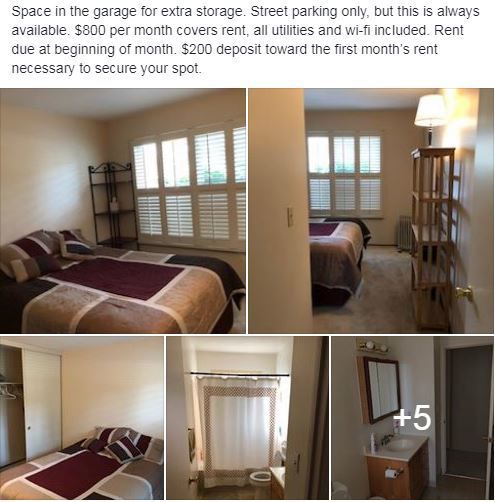 Another post from the California Interns group advertising a room in Napa. Posts often describe the living styles of the host, indicate gender preferences for tenants and include a deposit to reserve the room. 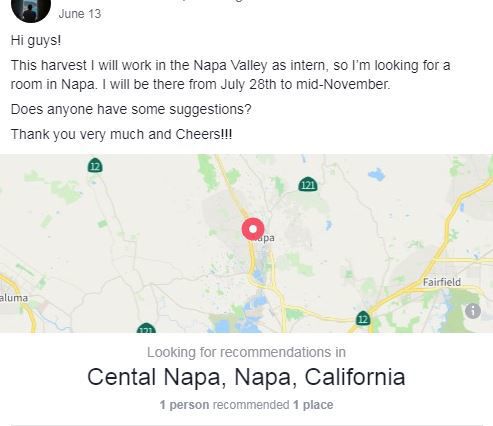 Just as community members post looking for tenants, harvest interns to-be post searching for housing in the area. The search can be especially difficult for interns who must go through the process entirely virtually.

At the same time each year, the wine industry’s newest generation of workers arrives: harvest interns. There’s a bounty of logistics to address before harvest even begins, and for Napa’s interns, finding housing tops the list.

In the wake of low rental vacancy rates in the North Bay, it’s difficult even for Napa’s permanent residents to find housing. The month-to-month nature of harvest internships creates an additional layer of complexity: rental units listed by property management companies often require a minimum one-year lease, as do apartment complexes.

Harvest brings hundreds of interns to Napa: it’s an experience considered a kind of “launching pad” for a longer career in the wine industry. Some are still in college; others, enjoying the travel involved with working different harvests or undergoing a career change, might be in their late 20s. Smaller wineries might have only a single intern; others might bring in a cohort for the season.

Many interns come from out of state – some from out of the country – and must conduct their search entirely virtually. Vinny D’Ambrosio, an intern for Hobo Wine Company in Santa Rosa, is originally from Virginia and turned to furnishedfinder.com, a website for traveling nurses, while looking for housing in the North Bay.

He made plans to rent a room through the website, which he thought was “less anonymous” than other sites, like Craigslist. His arrival did not go as planned.

“The place was nasty – it hadn’t been cleaned. (The host) seemed disheveled, and there were a lot of odd things at play,” D’Ambrosio said. He hadn’t yet signed a lease, and had such a strange gut feeling about the situation that he returned to furnishedfinder and moved the next day to a new location.

He now rents a room in a house from a middle-aged couple in Santa Rosa. He pays $850 a month.

“Doing the search through the internet is a challenge,” he said. “On one hand, (my first host) gamed that website, but then I found my current roommates, and they’re great.”

“We became empathetic to the fact that (harvest interns) are coming over here not knowing who they’re living with or their working conditions, so they’re taking a really big risk,” McMillan said.

Sometimes community members would post rooms for rent on NextDoor, where they would go unseen by harvest interns, so McMillan would turn to Facebook to spread the word.

A Facebook search led him to a group called “California Interns 2019 (Wine Industry).” Members, a mix of former and current interns and community members, posted looking for both tenants and rentals. The majority are in Napa and Sonoma counties, according to Guillaume Boudet, the group’s founder, but it spans as far down the state as Santa Barbara.

Boudet, now a winemaker at Hyde de Villaine, arrived from France for an internship in Napa in 2013. At the time, no such group existed—save a broader page for traveling winemakers around the world, where California interns would sometimes post.

When the group started out in 2015, he’d make a new page for each vintage. Beginning in 2017, Boudet said, he began simply updating the year. It grew to its current size – more than 2,300 members – mostly organically. Posters ask questions about the area, link with other harvest interns and, of course, search for housing.

“Every day, I get at least five or 10 new members,” Boudet said. “Come next March, when (interns) start realizing they need to figure out housing for the next harvest, it’ll be even more. I think it’s a special situation for Napa, because even for people who live here permanently it’s hard enough to figure out housing.”

Monica Tully, a laboratory technician for Domaine Chandon, found her current roommate on the Facebook page created by Boudet after deciding to move to Napa permanently. As a harvest intern in 2018, she found a room to rent in Napa through Craigslist. Tully visited Napa in the spring of 2018, but the process was challenging, even as she was able to see the rooms in person.

“It’s really hard to find month-to-month apartment complexes, which I know a lot of (interns) would prefer. It’s hard to move in with strangers,” Tully said, noting that her experience renting from a family had been very positive.

Budget also played a role; Tully didn’t want to spend more than $800, which she said seemed to be “middle range” for Napa’s listings. The room she rented, at $675 a month, was the cheapest she could find.

Wages for interns depend on the winery and the job itself – in the North Bay, rates ranges anywhere from $14 to $24 an hour. That makes renting a room in Napa the only realistic alternative, as rent for even studio apartments starts around $1400.

“From what I’ve heard and seen, I get a better wage (in the North Bay) than in most other places,” D’Ambrosio, the intern for Hobo Wine Company, said. “It doesn’t all go towards my rent, but with my other bills – it’s not the best pay.”

Even knowing housing would be more costly and perhaps harder to find in California, it was surprising to Tully, who’d come to Napa from a college town where there was ample, flexible housing.

“It was easy to find any kind of housing you could want there,” she said. “It’s interesting to me that (month-to-month) is not an option, even with so many interns coming here.”

Grey Cushman sent out “20 to 25 emails” in his search for housing as an intern for Robert Biale Vineyards. He arrived in Napa intending to live with relatives in the area only until he found more permanent accommodations. Stymied by the difficult process, he’s instead remained with family.

He’d previously come to work as a harvest intern in Napa in 2017 and had better luck then, renting a room he found through a friend of relatives.

Cushman has also interned for wineries in New Zealand, Australia and Oregon – places where finding housing was much easier, he said. He would stay in area hostels for the beginning of his internship and then join together with other interns to rent a place together. “The majority” of rentals were month to month, he said.

Having recently decided to try and make his move to Napa permanent, the issue is still at the forefront of his mind.

“It’s kind of strange – there’s not necessarily one great (platform) to go and find a place,” he said, noting he’d searched through a combination of Craigslist, Facebook (he’s a member of Boudet’s group), Zillow and other sites. He’s hopeful he’ll have better luck once harvest ends.

McMillan and his wife are hosting two interns at their home in Napa this year. Their experiences have been “way more positive than negative,” he said, and they enjoy the social and cultural exchanges (one of their renters is French). Though he’d previously been posting the open rooms on Facebook, they’ve recently developed a relationship with a winery in the area, which now contacts them on behalf of its interns looking for housing.

“It’s not difficult to find renters – there’s more interns than there are rooms,” McMillan said. “It’s definitely a need in the community.”

Want to work the Napa grape harvest? Due to visa freeze, opportunities abound this year

The Trump administration suspended the popular J-1visa program at the end of June, leaving many wineries scrambling to replace international workers.

Another post from the California Interns group advertising a room in Napa. Posts often describe the living styles of the host, indicate gender preferences for tenants and include a deposit to reserve the room.

Just as community members post looking for tenants, harvest interns to-be post searching for housing in the area. The search can be especially difficult for interns who must go through the process entirely virtually.