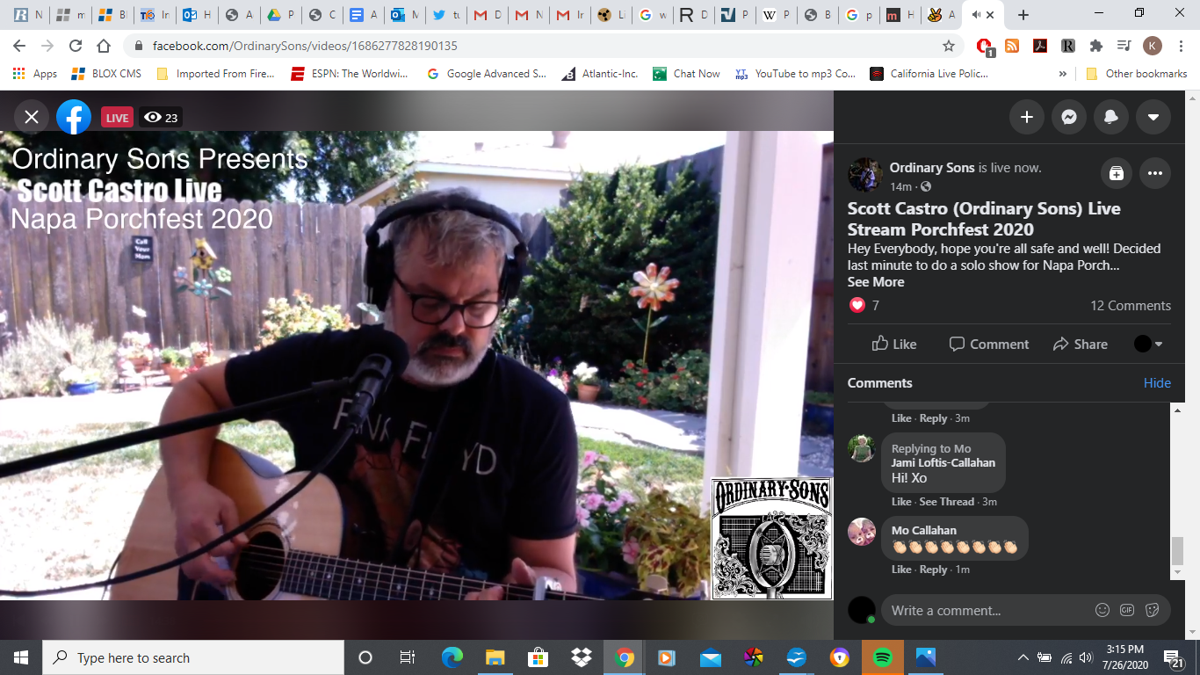 Scott Castro of the band Ordinary Sons performed a solo guitar set Sunday afternoon during a virtual version of the Napa Porchfest community music festival. Organizers put together a slate of performers to appear on Facebook on the day originally set aside for the 10th annual Porchfest, which was canceled due to the coronavirus pandemic. 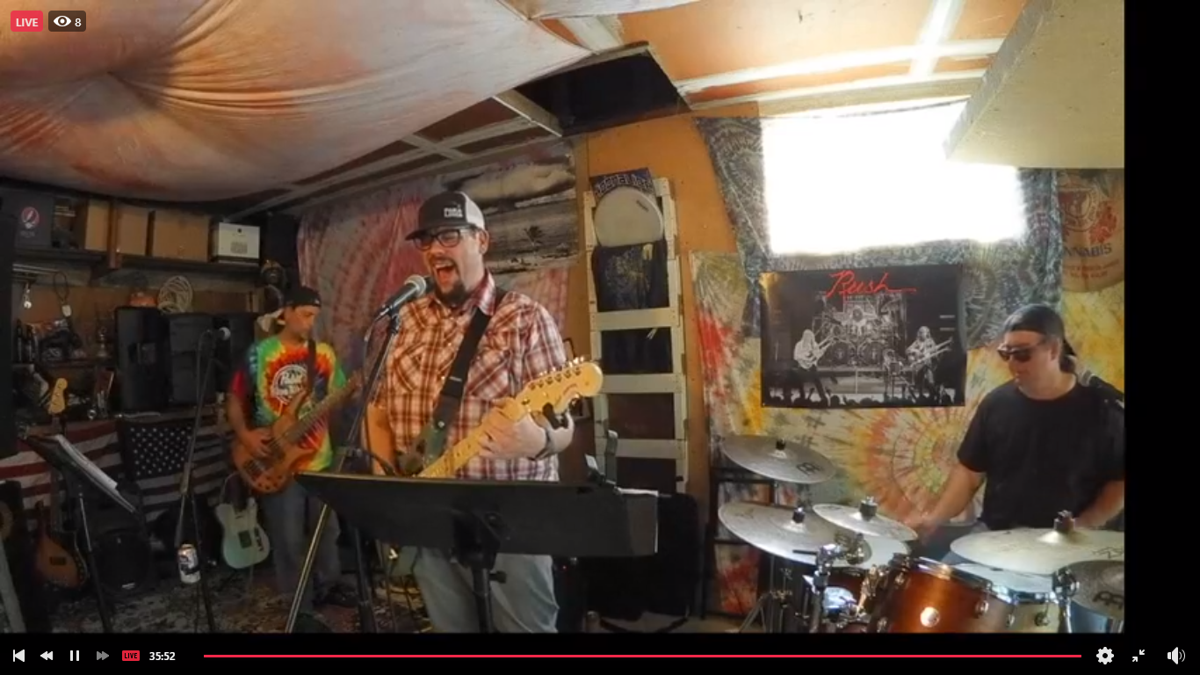 A basement became a stage for People of Earth during its livestreamed performance on Facebook, one of several sponsored by Napa Porchfest organizers as an online alternative to the music crawl that was to have taken place Sunday afternoon. 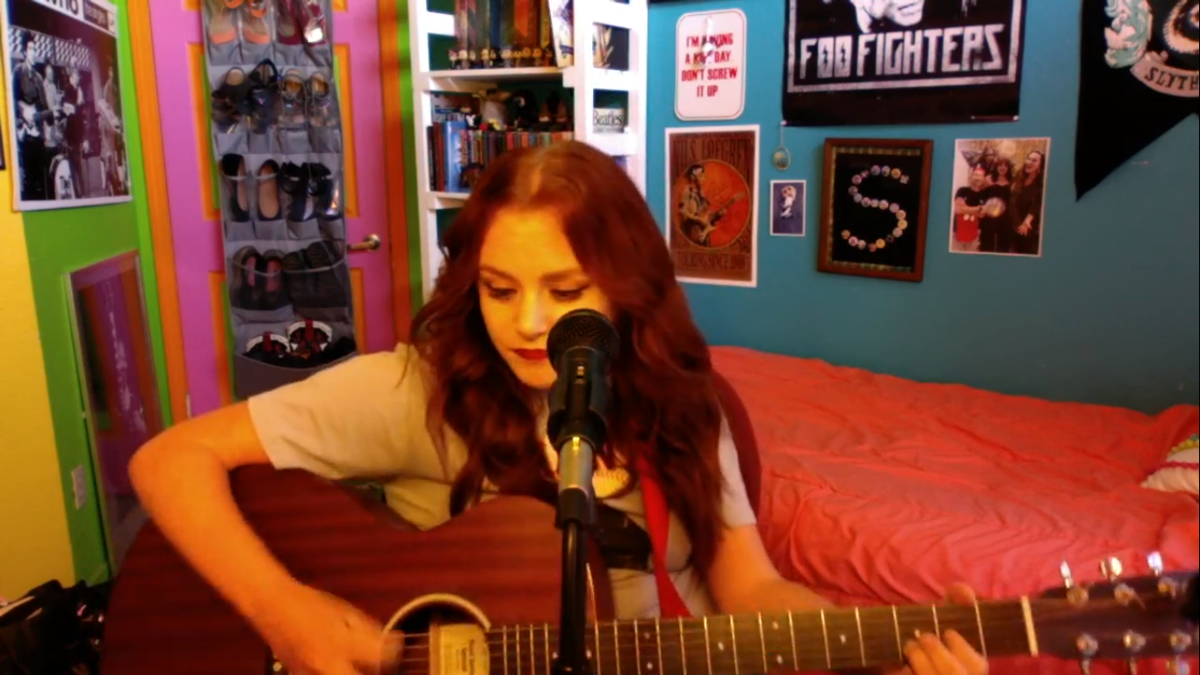 Shelby Lanterman performed a solo guitar set from a bedroom during Sunday's virtual Napa Porchfest, which was streamed live on Facebook.

It was a Porchfest without most of the porches – but with backyards, basements and bedrooms from which performers kept the heart of Napa’s annual community music festival alive.

The coronavirus outbreak caused organizers of Napa Porchfest to abandon the music crawl that would have taken place Sunday and drawn thousands of spectators to the Old Town neighborhood for shows by dozens of performers. Instead, on the afternoon that had been set aside for the event’s 10th annual edition, 11 musical acts displayed their guitar and keyboard chops live on Facebook video to keep their connections to their audience, even an unseen one.

Even with their usual audiences separated by a computer screen and a web connection, many of the musicians were eager to once again engage listeners both near and far.

“This is a new era for live music performers, and we’re having to figure out ways to be engaging and interactive with an audience we don’t physically see,” said Nehal Abuelata, lead vocalist of the band Sweet HayaH, which led off the concert slate shortly after midnight was part of a larger online concert held in San Mateo under a different producer, but advertised by Porchfest.

“We’re always excited at the idea of being able to share our art with an audience. For the last five years it was our ritual every year this Sunday – wake up 6 a.m. after playing the Gilroy garlic festival and then perform on the same stage, the Ackerman house, every year in Napa.

“We’ve obviously been sad not being able to play live shows,” she said. “Hopefully the audience we’ve seen on the porches of Napa will be listening to us, reminiscing about the performances we’ve had, about being in the middle of the street and bringing in crowds from all sorts of people who may not have known what was going on.”

Porchfest, which organizers have said had grown from about 300 spectators at its 2011 inception to 13,500 last July, was one of numerous music festivals large and small to be frozen by the spread of COVID-19. The pandemic has triggered widespread shelter-at-home orders effectively banning crowd events of all types. The postponement, and then deferral to 2021, of BottleRock, Coachella and other top pop music events pointed the way for Porchfest organizers to shift their own festival online, according to music director Micah Malan.

“We were watching it very closely,” he said Sunday morning. “When we saw bigger festivals postpone and reschedule, we did that and followed their lead. As the summer went on, the curve didn’t flatten out and we never got out of the first wave.”

Napa’s virtual Porchfest came together in less than three weeks, Malan said, with organizers drawing on a list of 85 acts that would have performed at porches and front yards on Sunday. To encourage social distancing, bands were allowed to perform in venues of their choosing, with one act streaming its online concert from Vacaville nearly 30 miles east of town.

Bands also were encouraged to set up PayPal and Venmo accounts to collect online donations from listeners, to replace the tip boxes that otherwise would have been placed in front of Porchfest stages. (Festival organizers are drawing on revenue banked from T-shirt sales and fees charged to food vendors at past events to stage this year’s slimmed-down event, according to Malan.)

The livestreamed, fan-free Porchfest required an adjustment for musicians like Shelby Lanterman, a singer-songwriter who performs as Shelby Ann and played her acoustic guitar set from a bedroom where a Foo Fighters poster and a door-hung rack of shoes were visible on the rear wall.

“It’s a little weird because you don’t hear clapping or cheering or anything like that,” said Lanterman, who has performed several sets on Facebook video since the COVID-19 stay-home order began in mid-March. “I go into this with the mentality of trying new things; I try a lot of songs I wouldn’t normally do live, do songs I’ve written that I haven’t shown anyone yet.”

“I’m a little bummed we aren’t able to do the usual Porchfest but I’m excited to participate,” she added. “I’m excited to perform today. Might be a little different today, but it’s still going to be fun.”

For those who chose to perform out of doors on a pleasantly sunny afternoon, the atmosphere was at first glance similar to that of a normal Porchfest stage, only far quieter. Shortly after 1 p.m., Ross Rubin appeared on Facebook behind an electronic keyboard and an amplifier, casually clad in khakis, a straw hat and a blue “ELECT WOMEN” T-shirt in the courtyard of a stucco-sided house.

Rubin had made his Porchfest date, but without his fellow members of the band Jealous Zelig, a regular at the Napa festival. “We had six concerts canceled, two in March before the shutdown, so we haven’t seen each other since then,” he said earlier. “I’m missing my band for sure.”

Jealous Zelig in recent months had performed in San Francisco and Petaluma, as well as in the Blue Note Napa in late January before the pandemic shut down concert venues.

Afterward, “the internet was flooded with Facebook live performances, and I just thought there was enough going on and I was overwhelmed by the whole paradigm shift,” said Rubin. “It’s taken (four) months to say ‘OK, let’s put the songs out there and see if we can provide a thoughtful diversion from our current conundrum.’”

Sunday’s internet Porchfest was a now-familiar setting for Scott Castro, who has performed online 10 times during the coronavirus shutdown both solo and with the band Ordinary Sons.

‘Honestly, I kind of like it now,” he said after playing 75 minutes’ worth of classic rock and Americana on the guitar. “I like having full control over how everything sounds. I played through my studio gear and it sounded like studio quality, and we can’t really do that when we’re set up for live (performance). When we do these livestreams, it’s like a recording.”

Indeed, Castro predicted he would keep on combining live shows with livestreams even after the pandemic passes – partly because of the lessons learned engaging an unseen audience. “In the very beginning I was bad at talking between songs,” he said, “and I’m still not great at, it but now I feel like I’ll be great at it when I’m playing in front of people again.”

Keeping up a connection with listeners was also important to Darleen Gardner, whose guitar set of R&B, soul and jazz was her first taste of online performance. For her song “That’s Love”—written for a friend whose husband died two years ago – she planned to ask listeners to join in, wherever they might be.

“I think I’ll even have them do a sing-along” for a part of the lyrics, she said before her set. “I won’t be able to hear it, but I’ll feel it.”

Take a Walk through the Rail Arts District in Napa

Take a Walk through the Rail Arts District in Napa

BottleRock Napa Valley reschedules for 2021 due to COVID-19

Because of state health orders, BottleRock Napa Valley has canceled this year's festival and plans to return on Memorial Day weekend 2021.

From rock to folk to string quartets and more, a smorgasbord of music was only a stroll or a bicycle ride away during Napa's ninth annual Porc…

Scott Castro of the band Ordinary Sons performed a solo guitar set Sunday afternoon during a virtual version of the Napa Porchfest community music festival. Organizers put together a slate of performers to appear on Facebook on the day originally set aside for the 10th annual Porchfest, which was canceled due to the coronavirus pandemic.

A basement became a stage for People of Earth during its livestreamed performance on Facebook, one of several sponsored by Napa Porchfest organizers as an online alternative to the music crawl that was to have taken place Sunday afternoon.

Shelby Lanterman performed a solo guitar set from a bedroom during Sunday's virtual Napa Porchfest, which was streamed live on Facebook.