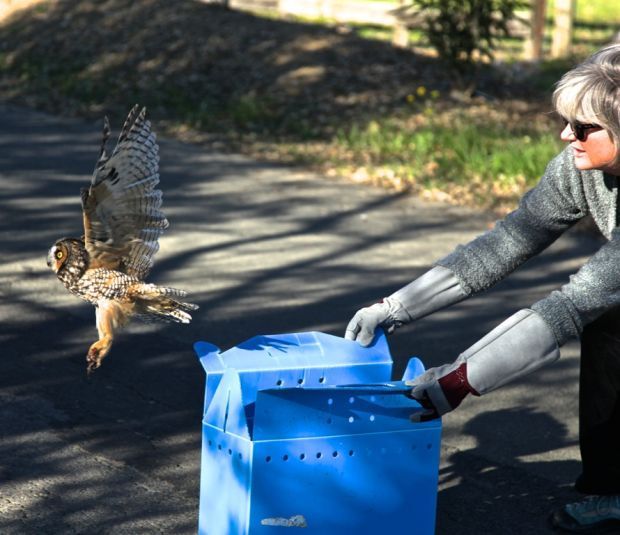 A long-eared owl, a species not spotted in the valley for the last few years, is released to the wild. It was found caught on a barbed-wire fence in Carneros and released there. Carol Poole, shown here, is both a board member and a bird rehabilitator for Wildlife Center of Napa Valley. 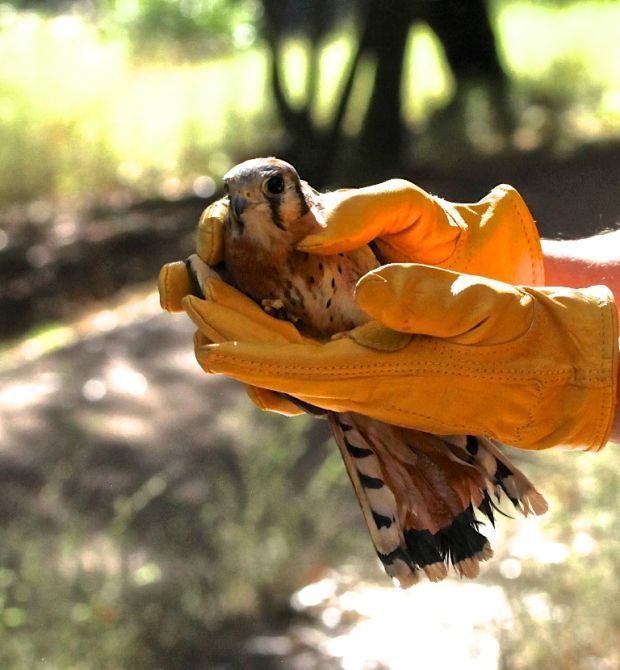 A kestrel, shown just prior to release, was found unable to fly in Browns Valley in west Napa. The bird was rehabilitated and released back into its old neighborhood.

Napa County is currently the only North Bay county without a permanent wildlife rescue and rehabilitation facility, but a wild time at Castello di Amorosa may change that.

A fundraiser, “A Wild Night at the Castle,” will be held Saturday, April 4, for Wildlife Rescue Center of Napa County. The event will include food, wine, live music, a DJ, auction items and “wildlife ambassadors” such as great horned owl, bald eagle and opossum.

“This event isn’t just about opening up wallets,” it’s also about opening up people’s lives and providing education about wildlife, said John Comisky, vice president of the board of directors for the nonprofit.

The Wildlife Center was established in 1991, but has never had a full-range facility for rescue and rehabilitation in the county, Comisky said.

“We don’t have facilities to rehab all species or injuries here. We have to take the ones we can’t (rehab) out and depend on Wildcare in Marin and Wildlife Rescue in Sonoma and others,” he said. When the animals are rehabilitated, they go get them and bring them back to be released in Napa County.

“We’re one of the most environmental counties in the state if not of the country, and yet we have to pretty much depend on the good will of other counties,” Comisky said.

There are many trained volunteers who specialize in specific species who care for the animals following proper protocols. These home-based “Satellite Care Centers” typically take in and care for more than 500 mammals and birds annually, and an equal number of songbirds at their clinic.

For example, there’s a woman who takes in baby squirrels, and someone else cares for opossums. This is a peak time for finding baby squirrels and birds, often after tree trimming is done.

“People should trim trees in late autumn to early winter because nothing is birthing babies,” Comisky said. “People just don’t know that. That’s part of the education piece.”

The center’s work is aimed at keeping animals as wild as possible. Too much human interaction could cause harm since the goal is to return the animals to their natural habitat.

At this time the center does not rehabilitate water birds, but instead sends them to a specialized facility nearby. It does take in hundreds of songbirds of different species each year, last year handling more than 500.

The Songbird Clinic operates 14 hours a day, seven days a week from April to September and requires more than 100 volunteers to operate. The Wildlife Center’s only paid employee works at this clinic.

The fundraising event at Castello is supported by a number of local wineries with animal-related names, such as Black Stallion in Napa, which will be pouring their wines along with Castello di Amorosa wines.

“Everything is all a donation, which is huge, and frankly we couldn’t be doing this gala without this kind of support,” Comisky said.

Tickets for “A Wild Night at the Castle” can be purchased through NapaWildlifeRescue.org, and clicking on “news and events.”

The shooting took place at about 3:40 p.m. Thursday and is believed to be gang-related, according to police.

A new Napan, who was homeless, died at the Home Depot in November. His family is looking for answers.

A Napa woman faces felony allegations of DUI and child endangerment in connection to the wreck Thursday on Imola Avenue, CHP reported.

An ADU constructed initially without permits over a garage may have to be rebuilt to conform to new conditions of approval added on by the city of Napa's planning commission.

The wreck Monday left a driver hospitalized with major injuries and blocked southbound traffic for more than an hour, according to police.

Police said the arrests on Wednesday are linked to a July 2 attack in downtown Napa in which five people were wounded.

Napans are blown away by holiday blow mold display

Napans Don and Debbie Nichols have created a holiday wonderland at their east Napa home that will surely blow your mind.

South Napa County is mentioned sometimes as an alternative place for Highway 37 away from sea level rise, but not yet seriously.

A family dispute Saturday afternoon at a Napa home ended with a woman’s arrest on suspicion of robbery, according to police.

A long-eared owl, a species not spotted in the valley for the last few years, is released to the wild. It was found caught on a barbed-wire fence in Carneros and released there. Carol Poole, shown here, is both a board member and a bird rehabilitator for Wildlife Center of Napa Valley.

A kestrel, shown just prior to release, was found unable to fly in Browns Valley in west Napa. The bird was rehabilitated and released back into its old neighborhood.