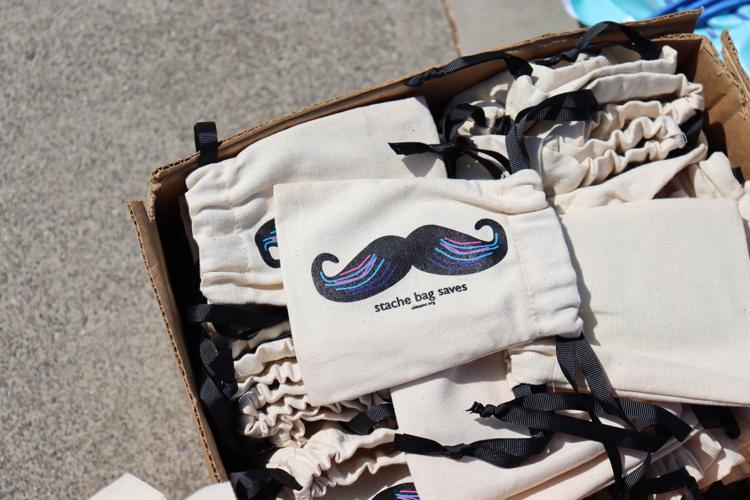 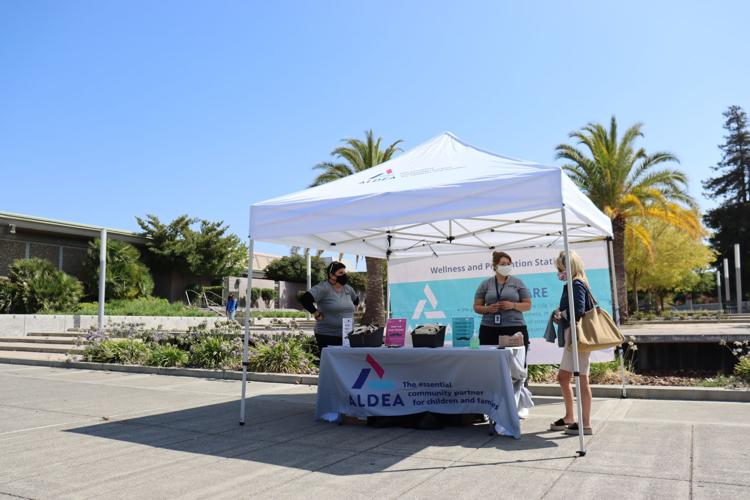 Aldea set up a  booth on the Napa Valley College campus on Wednesday to spread awareness of fentanyl. 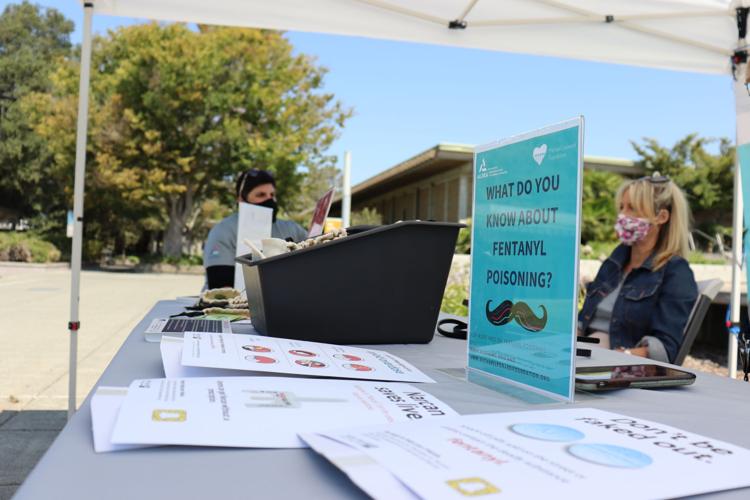 It’s a warm, quiet Wednesday morning at Napa Valley College; the skies are pure blue, masked students appear briefly in the halls then wander off, and Aldea Children & Family Services has set up a booth outside the McCarthy Library to teach passerby about the deadly opioid fentanyl.

“There’s no margin for error,” said Michele Farhat, Aldea’s director of development, present at the booth. “It’s not like taking 20 pills can kill you, one pill can be the one. There is a sense of urgency; we’re getting the warning out so people understand what’s happening.”

An illustration of a black handlebar mustache, with several colorful, fibrous hairs, can be seen prominently around the Aldea booth, printed upon signs proclaiming “WHAT DO YOU KNOW ABOUT FENTANYL POISONING?,” “FENTANYL AWARENESS CAMPAIGN,” and “WHAT’S IN YOUR ‘STACHE? (Hint: it might not be what you think).”

The mustache is most apparent on scattered bunches of small, beige “stache bags,” which contain fact sheets about fentanyl — that it’s 50 to 100 times more potent than morphine, for example — along with cards with phone numbers for places to get help and packages containing rapid testing strips that can check for the presence of fentanyl in other drugs.

These “stache bags’” are being handed out to students in the hopes that, should they or their friends consume drugs in the near future, they’ll recall the fentanyl facts and try out a test strip, just to be safe, Farhat said. Testing the drugs involves dissolving them in water and sticking an end of the strip in; it’s important to test the entire dose because fentanyl can clump up “just like chocolate chips in a cookie,” according to the instruction sheet.

“We get that kids are going to party,” Farhat said. “But fentanyl is so dangerous and invisible; we’re just asking people to take a quick step just to make sure.”

Aldea’s fentanyl awareness effort is being kicked off in partnership with the Michael Leonardi Foundation, a local non-profit focused on increasing awareness around fentanyl, particularly among young adults. The Napa-based foundation was started by Michael Leonardi’s parents last year, after he died from fentanyl poisoning from consuming what he thought was a Percocet pill. Mona and Mark Leonardi, Michael’s parents, were both present at the Aldea booth on Wednesday.

Though the COVID-19 pandemic dominated headlines last year, more than 93,000 people in the United States died of a drug overdose in 2020, according to the Centers for Disease Control and Prevention, which represents a 30% rise in deaths compared to 2019. And much of that rise can be attributed to the prevalence of fentanyl and pandemic-related stressors, according to reporting from National Public Radio.

Farhat said awareness of the fentanyl epidemic is the first step, and it comes with giving people tools: letting them know the signs of a fentanyl overdose, that fentanyl may be present in other drugs they buy from dealers, that they can use fentanyl strips to not accidentally consume the drug and that the medicine Naloxone can be used to reverse overdoses.

“One way we can make a dent in the fentanyl problem is education and then offering tools,” Farhat said. “These ‘stache bags are a way to reach out to the 15 to 25-year-olds and it’s to help with harm reduction. We’re not passing judgment on what people are doing.”

Kerry Ahearn, Aldea’s CEO, said that the organization’s effort is deliberately focused on providing resources to reduce harm and being respectful of people’s drug use.

“Harm reduction has been proven to be more effective than: ‘just say no,’” Ahearn said.

In tackling the fentanyl crisis, she added, it’s also important to debunk stigmas around drug use, like that those who use drugs choose to become addicts, or that kids from affluent families won’t use drugs.

“Anyone can fall into drug use drug abuse or alcohol abuse,” Ahearn said. “Alcohol and drug abuse carry a stigma because they’re not treated as a disease or illness.”

Napa couple creates the Michael Leonardi Foundation in honor of their son who died of fentanyl poisoning.

Napa County says major pharmaceutical companies should foot the bill for opioid addiction and overdose treatment which have hit the county hard.

The advisement will inform defendants of possible murder charges if they sell fentanyl-laced drugs to a person who later dies from the substance.

Timelapse shows Earth from the view of an ISS astronaut

The Terminator T-1000 is real! Scientists create man-shaped robot that turns into liquid

The Terminator T-1000 is real! Scientists create man-shaped robot that turns into liquid

Aldea set up a  booth on the Napa Valley College campus on Wednesday to spread awareness of fentanyl.