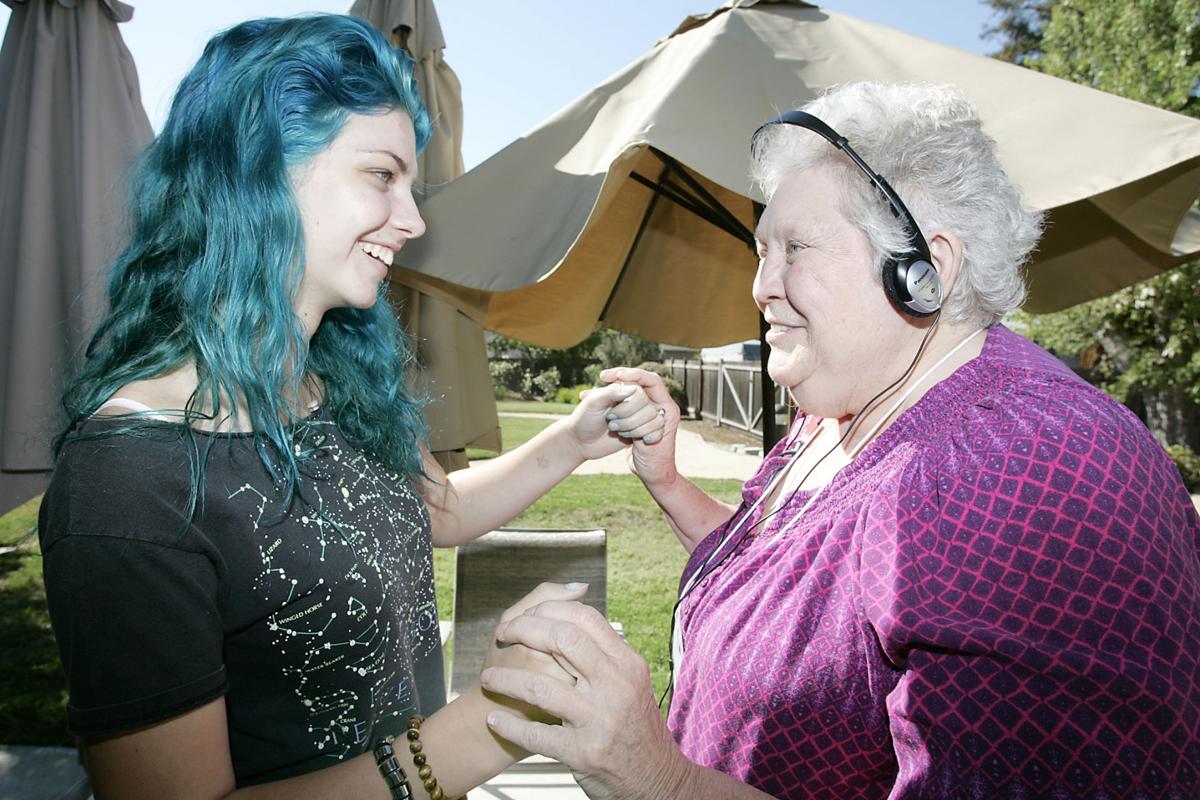 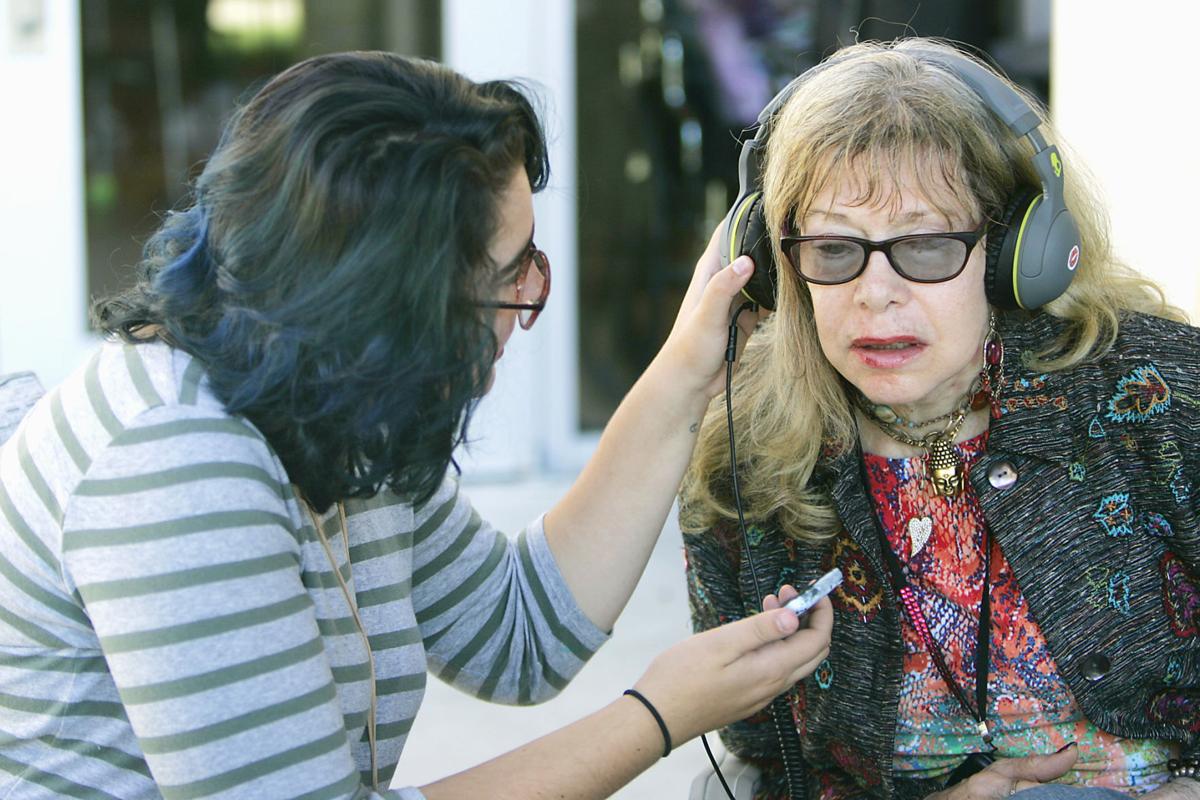 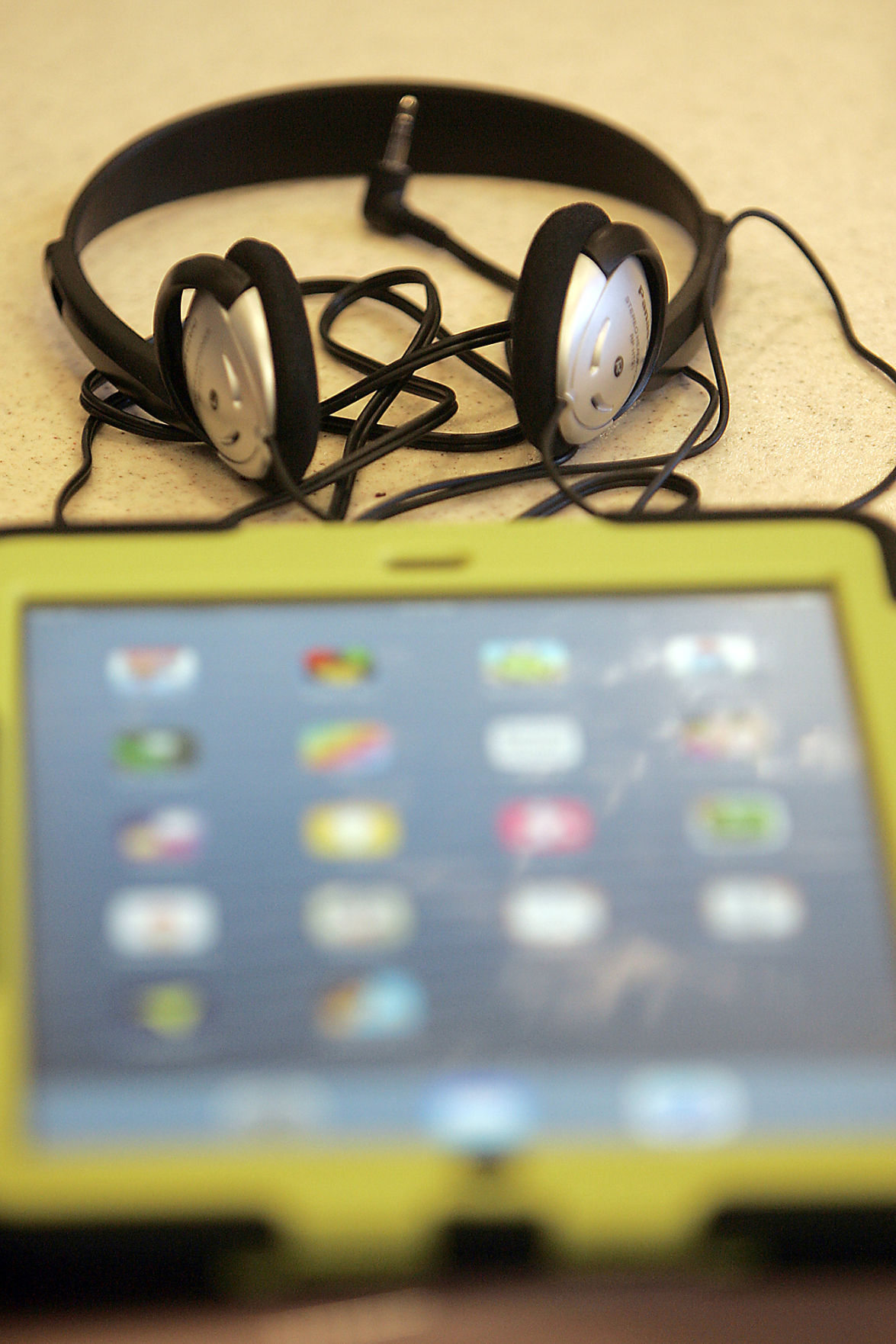 As they listened to their favorite songs with headphones, Alzheimer’s and dementia participants at Napa Valley Hospice and Adult Day Services began nodding their heads and tapping their feet to the music.

One woman, looking radiantly happy, danced as she sang along with the voices of Johnny Cash and June Carter coming from an iPhone: “We got married in a fever hotter than a pepper sprout …”

A group of 12 student volunteers from SuzAnne Regalia’s “Voices in American Culture” class at New Technology High School were at the facility earlier this month, creating personal musical playlists for people suffering from Alzheimer’s or dementia.

When people with these conditions hear a melody connected with a meaningful memory, they can reconnect to life, said Adult Day Services program director Celine Regalia. People who have not spoken in years may sing lyrics. Some may regain their ability to converse and connect to those around them, she said.

Musical memory is profoundly linked to emotions, Celine Regalia said. While Alzheimer’s damages the ability to recall facts and details, for many patients it does not destroy these lasting connections between a favorite song and a memory of an important event.

The students prepared for their volunteer work by studying the musical tastes of older people and learning about the brain diseases the can occur with aging.

“They had to study the music from the 1930s–1980s and were really looking forward to seeing if anyone listens to ragtime,” said SuzAnne Regalia.

Some of the program’s participants used writing and hand gestures to indicate musical preferences to the students.

One man’s response to music by Led Zepplin, Bob Marley and Queen was a huge grin, nodding his head favorably and a thumbs up. When asked if he liked music by Duran Duran, his hand gestures and facial expression clearly indicated that he did not.

“What did you listen to on the radio and television?” Daisy Ramirez, a senior from New Technology, asked a man at Adult Day Services in Spanish.

After he responded in Spanish that they didn’t have a television when he grew up, she asked more questions. Initially he couldn’t remember any musical artists, but by humming tunes he remembered some.

“It is interesting to see the type of music each person likes, but it is hard to discover their favorite music when they don’t know the names of the artists,” said senior Myra Castellanos.

The students were challenged to find music for a man who grew up in Greece. He couldn’t remember the names to any songs but started singing in Greek so the students began researching to find the right era and genre of Greek music – and decided to ask his wife what songs were played at their wedding.

The benefits of music that awakens lost memories are immediate and significant. These include the alleviation of depression and anxiety, increased social activity and increased physical activity, Regalia said.

So far, the students have conducted in-depth interviews with 20 Adult Day Services participants. The students will be returning to the facility two more times this year to reach more of the program’s 135 participants.

Napa Valley Hospice and Adult Day Services was certified to offer the Music and Memory program to those with Alzheimer’s or dementia in August.

“I first heard about the effectiveness of this program through the Alzheimer’s Association,” Celine Regalia said. “The director of Music and Memory came out to Sonoma State University and did a talk and showed us the movie ‘Alive Inside: A Story of Music and Memory.’”

The 2012 award-winning documentary includes the famed neurologist Oliver Sacks, who recently died, and shows how the nonprofit organization founded by Dan Cohen is improving the lives of the elderly and infirm through digital music technology.

By using this program we’ve seen reduced agitation and, for people with severe anxiety, this music has the ability to calm them instantly,” said NVHADS Music and Memory coordinator, Tayler Tildsley.

“I’ve seen it almost bring the person back to life. I’d seen what it could do in the documentary ‘Alive Inside’ but then, when I saw the improvement with people I know here, I realized it was infinitely great,” Tildsley said. “It is so exciting to see this first hand.”

The next step will be securing the musical rights for the music and loading it onto digital devices such as iPods or MP3 players. Once the devices are loaded, the program will be initially rolled out to those most in need and subsequently to all patients and participants.

“One of our goals with this intergenerational program is for family members and caregivers to be trained to use the Music and Memory program therapeutically and for interventions,” Tildsley said.

The Music and Memory program and certification was made possible by a grant from Your Home Nursing Services in Napa, she added.